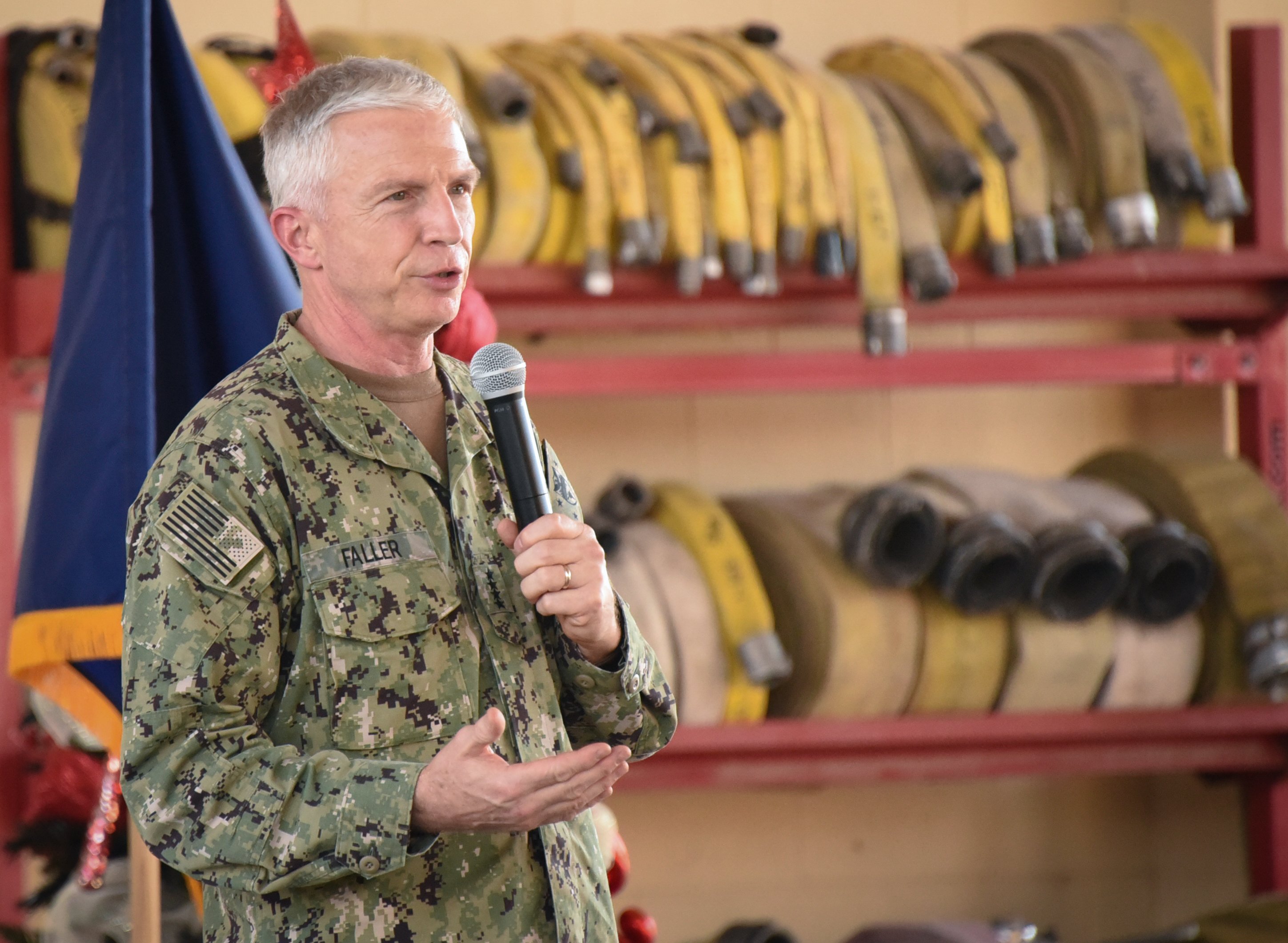 China has used the COVID-19 pandemic to rapidly expand its “corrosive, insidious influence” – from money laundering for transnational gangsters to using its own ships to illegally fish protected waters and benefit from illegal logging and mining – “in our neighborhood,” U.S. Southern Command’s top officer said Tuesday.

“I can’t stress enough the full-court press” China has put on the Western Hemisphere by promoting itself as an effective vaccine distributor to combat the pandemic, underwriting 40 port expansions or developments, offering questionable loans and pressuring the few remaining countries who recognize Taiwan as an entity to drop diplomatic recognition of the island, SOUTHCOM’s Adm. Craig Faller told the Senate Armed Services Committee on Tuesday.

China is also using its economic leverage in the region to push Huawei’s 5G telecommunications network to control that expanding market, Faller said. The United States has long raised concerns with NATO allies and partners in the Pacific about the danger to their own national security in allowing Huawei to control their telecommunications systems.

“Our influence is eroding” in Latin America as China and Russia have stepped up their propaganda and disinformation campaigns there. He added the United States’ efforts in combating the pandemic by providing $230 million to 28 countries in South America are often lost in the steady stream of Chinese propaganda over what it is doing. Russia, on the other hand, questions what lies behind American efforts in the region.

Faller said that during a recent meeting he had with representatives from the United Kingdom and the Netherlands, which both have interests in the Caribbean and South America, they compared the region to a lifeboat.

But it’s a “lifeboat that is sinking [because of] violence and Chinese influence.” At a press briefing in the Pentagon, Faller added the United States is particularly questioning Beijing’s involvement in port construction and development in South America. “Why would they be looking at blue-water and deep-water ports” unless they saw them as possible future military bases, he questioned.

This rapid expansion of Chinese activities in the hemisphere and their connections to transnational criminal activities caused the committee to schedule a classified hearing immediately following the public session.

In his opening remarks, Faller described the COVID-19 pandemic’s impact as the “perfect storm” that sent South America’s economies plummeting by more than 7 percent, setting off new waves of violence as gangs battle for control of the narcotics trade. That, in turn, set off waves of immigration to the United States from Central America. Further south, Venezuela – “with an economy in a tailspin” from the pandemic and U.S. sanctions – has seen millions of its citizens seek refuge in Colombia and Brazil. In addition, the transnational criminal organizations have created black-market supplies to meet demands for vaccines and medical supplies and equipment that the region needs.

He compared the economic collapse to the Great Depression in a press briefing later. 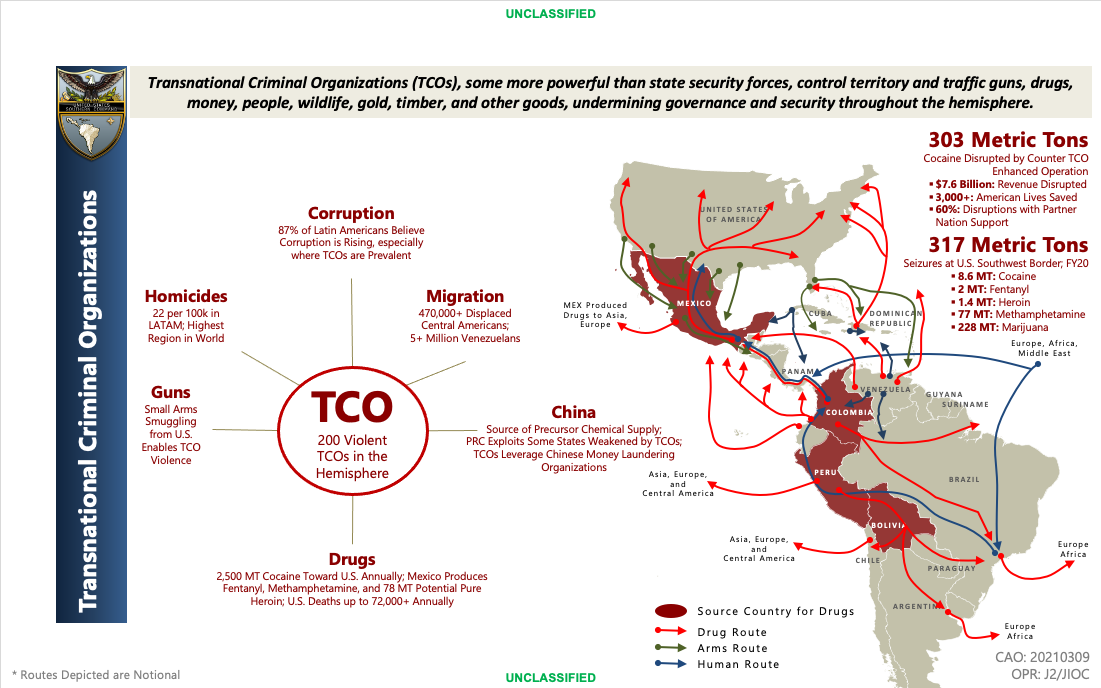 All this combines “to allow bad actors like China” to operate freely. He added Russia also sees opportunities to expand its reach in the hemisphere beyond Cuba and Venezuela. Russia has tripled the number of hours of Spanish-language broadcasting it aims at South American audiences.

Citing intelligence from the Drug Enforcement Administration, he said the gangs traffick “in drugs, people, guns and illegal mining and [then] launder [their profits]” through Chinese enterprises.

Faller underscored the major shortfalls he has in intelligence, surveillance and reconnaissance and Coast Guard and Navy ships, which are critical to the interdiction of illegal narcotics flowing northward.

Faller told the panel that last year the command took a 46 percent hit in its ISR budget, meaning he had fewer eyes and ears on “what are our competitors are up to.” By competitors, he was referring to transnational gangs, the Chinese and the Russians.

He added during the Pentagon press briefing that some of the intelligence gap can be met by better and consistent use of artificial intelligence and machine learning. They “show great promise … to build all-domain awareness.”

Last week, Robert Work, vice chairman of the national commission on artificial intelligence, testified that SOUTHCOM was a model for other combatant commands to follow in using data effectively. Work is also the Chair of the Board of the U.S. Naval Institute.

His prepared testimony said the combination of Navy and Coast Guard assets – from vessels to manned and unmanned aircraft, plus the better use of AI and machine learning – “increased the targeting of known air and maritime illicit trafficking by 65 percent.”

“Intelligence drives everything,” Faller said. He added later, “we can’t interdict our way out of narcotics” as long as demand for illegal narcotics remains high in the United States.

“We do not have enough Coast Guard and Navy ships to do our mission,” Faller said. Yet Coast Guard presence with its law enforcement component “are a top priority for our partners” in curbing narcotics flow and enforcing their fishing laws. In prepared testimony, he said the Coast Guard’s Offshore Patrol Cutters “will be critical to keeping drugs off our streets and countering” transnational criminal organizations.

King said, “we’re not interdicting the ones we know about” even now with the ISR cuts.