Huntington Ingalls has tapped the first woman to lead its naval shipyard in Mississippi, the company announced on Friday.

Kari Wilkinson, currently Ingalls’ vice president, program management, will take charge of the yard on April 1 as the president of HII’s Ingalls Shipbuilding. She will replace outgoing president Brian Cuccias, who has served as the head of the shipyard since 2014.

She started at HII in 1996 as a naval architect on a variety of programs and was involved in rebuilding the Gulf Coast yard after the damage of 2005’s Hurricane Katrina.

In 2007, she became a ship program manager for the San Antonio-class (LPD-17) program and then rose to her current role of Ingalls vice president, program management in 2016. 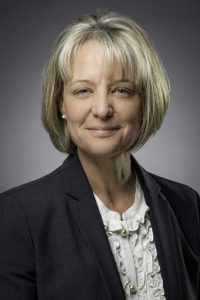 Cuccias joined the company in 1979 as a financial analyst with Litton Data Services, later purchased by HII parent company Northrop Grumman, and rose to vice president, amphibious ship programs and vice president, program management, according to the company. He’s expected to retire.

Wilkinson takes charge as the yard builds the current key ships that form that backbone of the Navy’s surface fleet. However, the service and the parent company are looking toward smaller and unmanned vessels in the future.

HII has made a major investment into unmanned naval systems with several key acquisitions of autonomous systems companies like Hydroid and Spatial Integrated Systems Inc.

“Overall, we think unmanned space is going to fundamentally change the Navy going forward,” HII CEO Mike Petters said in 2019. “The intent to try to make ships more lethal, from the Navy standpoint, is something we’re paying closer attention to.”

HII was one of six companies to win a $7 million study contract in September to develop a concept for the Large Unmanned Surface Vehicle. It’s unclear how Ingalls will fit into HII’s unmanned plans. However, the yard will be one of two likely competitors for the DDG(X) program currently percolating in the Navy’s requirements process.

Wilkinson is the second woman to take charge of a major division of HII. In 2017, Jennifer Boykin became the president of carrier and submarine shipyard Newport News Shipbuilding.