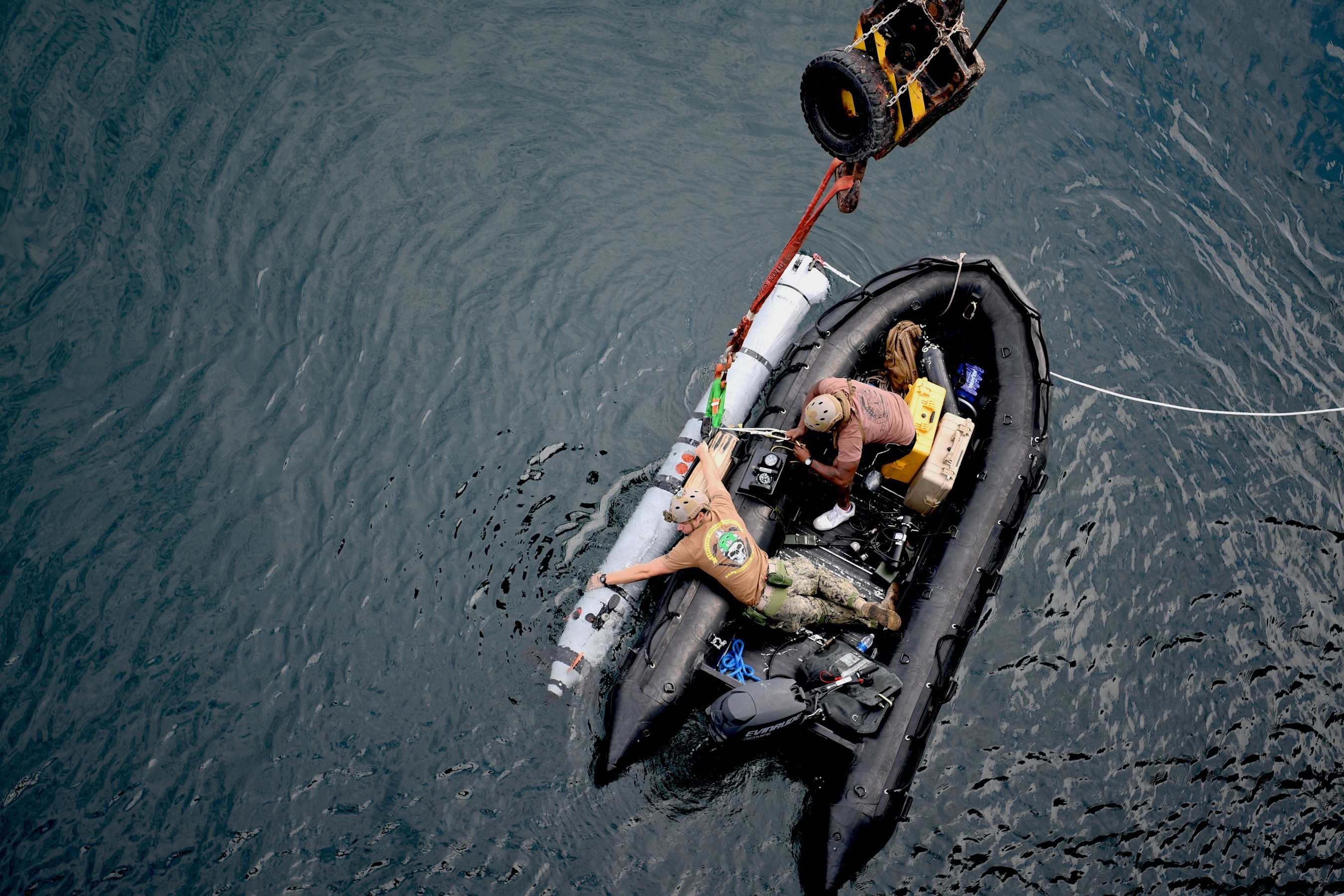 Sailors ready a MK 18 Mod 2 unmanned underwater vehicle, based on the Hydroid Remus 600, during Mine Countermeasures Exercise (MCMEX) 19-1 on Dec. 6, 2018. US Navy Photo

The $350-million deal to acquire the Massachusetts-based UUV maker from Norwegian company Kongsberg sets up HII to compete in the emerging U.S. military UUV market, Petters told USNI News in a Tuesday interview following the announcement of the deal.

“The UUV space is a space that we believe is only going to grow in importance. In my personal view, it’s not going to be a replacement for anything, it’s going to be an augmentation to the Navy’s traditional missions and operations,” he said.

Hydroid specializes in medium and small UUVs for defense and commercial work. The UUVs include the Remus 600, which serves as the basis for the Navy’s MK 18 mine countermeasures system. The successful torpedo-shaped UUV is emerging as a key technology in how the Navy will go after sea mines in the short term.

For HII, the acquisition will follow up the 2015 acquisition of part of the Columbia Group that had developed the Proteus UUV for long-range undersea missions and as a swimmer delivery vehicle.

“We at HII started working with a team that had been operating Proetus for a while, and we came to understand that we really didn’t understand this space because we didn’t have products in the water,” Petters said.
“What we saw from Proteus is that you have to be in the space. What we’re really happy about with Hydroid is they’ve been in the space for a long time.”

Petters previewed the HII push into unmanned in August during an earning’s call with investors.

“Overall, we think unmanned space is going to fundamentally change the Navy going forward,” Petters said at the time. “The intent to try to make ships more lethal, from the Navy standpoint, is something we’re paying closer attention to.”

Faced with a manpower challenge and a growing list of subsurface threats, the Navy increased its investment into UUVs as part of as part of the Fiscal Year 2020 budget submission last year. Last February, the Navy called for investing $359 million into new UUVs.

The experiences with Proteus and the growing demand for UUVs from the Navy moved the company to do more with unmanned.

“We stepped back and said, ‘boy, how long would it take us to build that sort of capability? How much investment would it take for us to build that kind of capability, and could we even do it?’ It became it pretty clear that that was a mountain too high for us to do it organically,” Petters said.
“This gives us now a critical mass inside of HII to think more about how we can invest in this space to make the Navy more successful in the unmanned space. It also gives us the chance to see what Kongsberg is doing around the world in the rest of its maritime and defense spaces.”

As part of the deal, HII and Kongsberg agreed to a strategic partnership to help the Norwegian company get technology into the U.S.

“We are very impressed with the portfolio that Kongsberg has, and because they’re not a U.S. company, sometimes it’s not easy for the U.S. security market to reach them,” Petters said.
“We want to help them do that. We want to help them have their capabilities that the Navy needs, we want to be able to help them with access.”

At the same time, the relationship could guide more international work toward HII.

“If there’s an opportunity where an HII capability might augment their approach to that market space, we’re standing by to work with them on that,” he said.
“Right now we’re saying it’s a strategic alliance, and we’ll see what happens.”