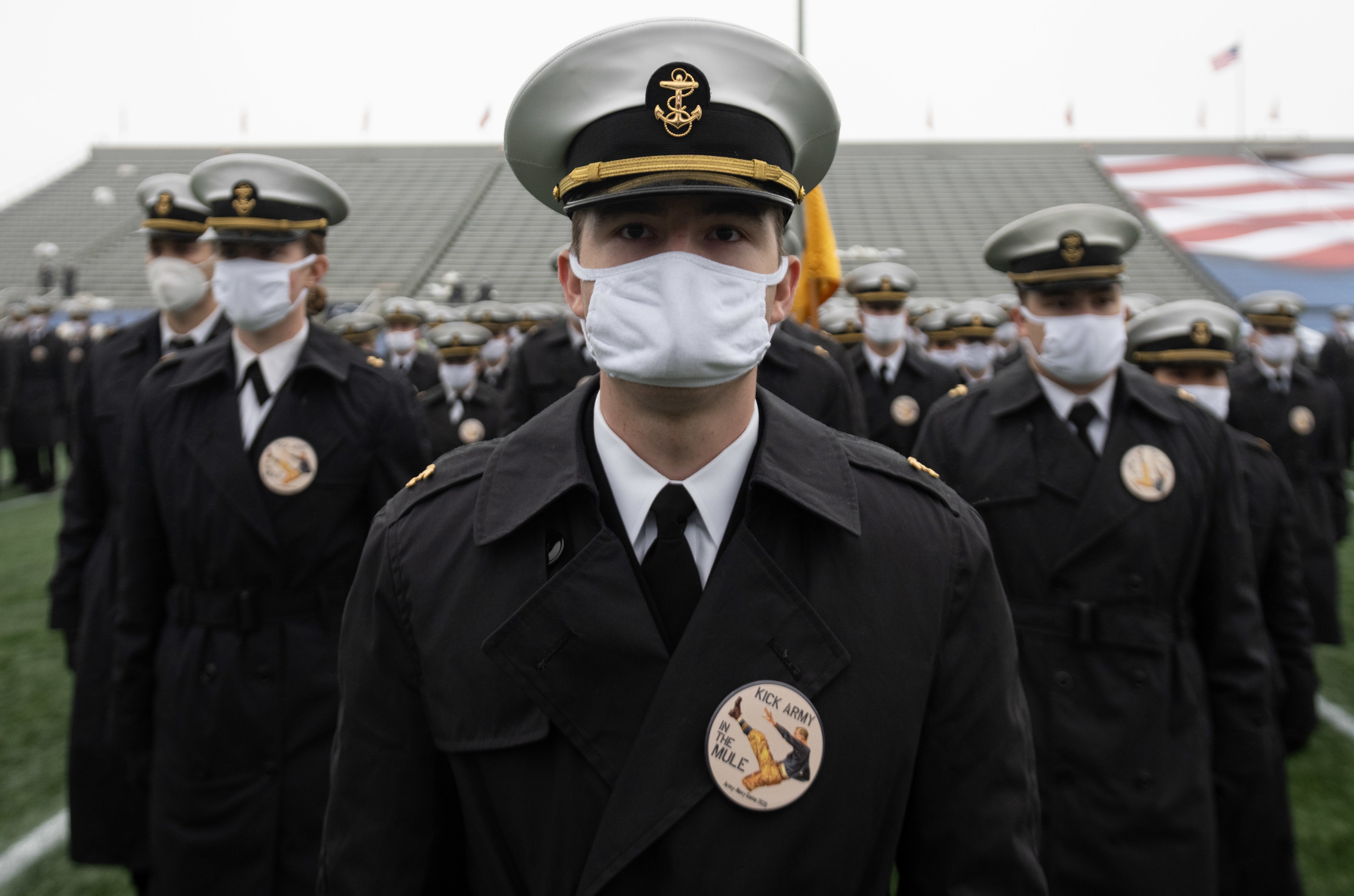 United States Naval Academy midshipmen march on the field before the Army-Navy football game at the U.S. Military Academy’s Michie Stadium in 2020. US Navy Photo

This post and headline have been updated with additional information from the U.S. Naval Academy.

Naval Academy midshipmen would need be eligible to receive their first COVID-19 vaccinations starting the last week of March “to preserve the safe and healthy bubble” they will enter in the fleet this summer, the superintendent told a House panel Tuesday.

Unlike the other service academies, where cadets would be among the last to receive the shots, Vice Adm. Sean Buck told the House Appropriations defense subcommittee the Navy has approved this program for Annapolis so “we can conduct summer training [that is] essential to the development of midshipmen.”

While USNA leadership wants the midshipmen to start receiving vaccines by the end of the month, it’s unclear if the vaccines will be on hand to administer, a Naval Academy spokesperson told USNI News following an earlier version of this post.

The Defense Department rollout of the COVID-19 vaccination program calls for first responders, deployers and mission essential service members, civilians and contractors to receive shots first. Otherwise, as  Air Force Academy superintendent Lt. Gen. Richard Clark told the subcommittee, “cadets fall into the lower levels” because they are younger and healthier than other groups.

The three approved vaccines have FDA approval for “emergency use.” Earlier testimony revealed about one-third of those now eligible in the department are declining to be vaccinated.

Because of the pandemic, no midshipmen were sent to the fleet for training. Instead, they were offered classes at the academy.

Buck said the pandemic “presented incredible obstacles” to the Naval Academy. “We re-imagined how to safely execute our most basic” operations, through hybrid models of instruction, social distancing, creating quarantine space, leasing dormitory space at nearby St. John’s College, grab-and-go meals and more. He praised faculty, information technology support staff and the brigade for making the shift “in only two weeks” to fully online learning last spring.

Buck added the academy was determined to have an “in-person Plebe Summer of the Class of 2024.” But again, there was a major change in how it was conducted. The written testimony described the creation of “pods” of 40 to 48 plebes that minimized contact between each “pod” to prevent the pandemic from spreading through the incoming class and its detailers.

In his written testimony and opening statement, Buck said, “you cannot develop leaders online,” so the academy’s goal in the fall was to conduct the fall semester in-person. He said classes were being conducted in-person and through remote learning to maintain social distancing and reduce the number of people in the confined space. He told the subcommittee the Naval Academy’s faculty is 53 percent civilian, most on a tenure track, and 47 percent military. The other service academies were 60 percent or more uniformed military.

While there has been a recent uptick in positive tests for COVID-19 among midshipmen, Buck said that since the pandemic began the academy’s numbers “are well below our surrounding community” of Annapolis and Anne Arundel County.

Panel members several times asked each of the superintendents what their academy was doing to prevent and combat sexual harassment, Buck said, “the number one way to get after prevention … is through peer leadership” to bolster confidence in the brigade that these matters are taken seriously. In his written testimony, he discussed midshipmen developing a special app to include links to resources and intervention strategies, “as well as a tracking program where friends can discretely reach out to one another.”

He added, “success in these programs depends on the brigade trusting their peer leaders” to end “blue on blue” assaults and harassment.

On academic issues, Buck said he is continuing to look at a cheating scandal in a sophomore physics class that came to light in December. He said the academy “immerses [midshipmen] on a daily basis in a culture of character and honor” that builds toward graduation and commissioning. Like his counterparts at West Point and Colorado Springs, he said Annapolis does not use a “fear-based model” to remind midshipmen of the honor code, especially those in their first or second year, and the steps they need to take to remain at the academy if they are found in violation.

The other superintendents reported a 95 percent success rate using this approach. Buck did not have time left to answer.

“I don’t believe we missed a beat” in being alert to the impact the pandemic was having on the mental wellness of midshipmen, he said. Buck cited fellow midshipmen working with their classmates, company leaders “who are with them hourly,” chaplains and the Midshipmen Development Center in addressing this issue.

“We’ve seen a rise in requests for services, [but] not a rise in requests for therapists.” He added in an answer to a follow-up question that “we’ve had to work diligently to reduce that stigma” of asking for help with mental health issues. He said that in a previous position where he oversaw the Navy’s efforts to reduce suicides in the ranks he promoted a campaign that emphasized “it’s a sign of strength to ask for help.”

The superintendent differentiated between mental health issues and morale issues caused by the lockdowns and spikes in COVID-19 cases.