The Navy faces a conundrum in renovating its centuries-old public shipyards.

On one hand, the sooner the yards are redesigned with more efficient layouts and overhauled to have the latest tools and machines, the sooner yard employees can start repairing submarines and aircraft carriers at a faster pace and dig out of the maintenance backlog that plagued the sea service throughout the last decade.

On the other hand, the Navy has to continue working on submarines and carriers while overhauling the yards, and any intrusive work in the public shipyards could mean a halt to maintenance activities.

It’s that very issue that the Navy and one of its biggest advocates in Congress are grappling with right now.

The Shipyard Infrastructure Optimization Plan, the service’s initiative to renovate its aging public shipyards so they can accommodate the fleet’s newer platforms, was originally designed to be a 20-year, $21-billion effort.

But Rep. Rob Wittman (R-Va.), who is the ranking member on the House Armed Services seapower and projection forces subcommittee and has long argued the Navy needs to accelerate the plan’s timeline, told USNI News in a recent interview that he has spoken with Chief of Naval Operations Adm. Mike Gilday about the SIOP.

“He agrees that the timeframe is too long, especially in relation to [the Columbia-class ballistic missile submarine] coming online and [the Ford-class aircraft carrier] coming online. It really needs to be a twofold process,” Wittman said, referencing the two new nuclear-powered platforms that will join the fleet and are too large to fit in most of the dry docks or otherwise can’t be maintained at the public shipyards.
“There needs to be an effort on the military construction side, because dollars for that will come through the military construction budget. But also having some directives in the Armed Services Committee as to what the Navy needs to do to accelerate the SIOP’s plan.”

Meanwhile, Navy officials have expressed concern that speeding up the timeline could be problematic because the service has to conduct maintenance availabilities while it updates the yards.

Vice Adm. Bill Galinis, the commander of Naval Sea Systems Command, has voiced concerns about the service’s ability to fast track the timeline.

“The shipyards are still working submarines. They’re still working aircraft carriers. So, you know the maintenance work doesn’t stop just because we’re doing through the modernization piece. So there are probably elements of the SIOP that we can accelerate,” Galinis said last month during a virtual symposium hosted by the American Society of Naval Engineers. “This is one [where] the devil’s going to be in the details. And we really kind of have to take a look at it.” 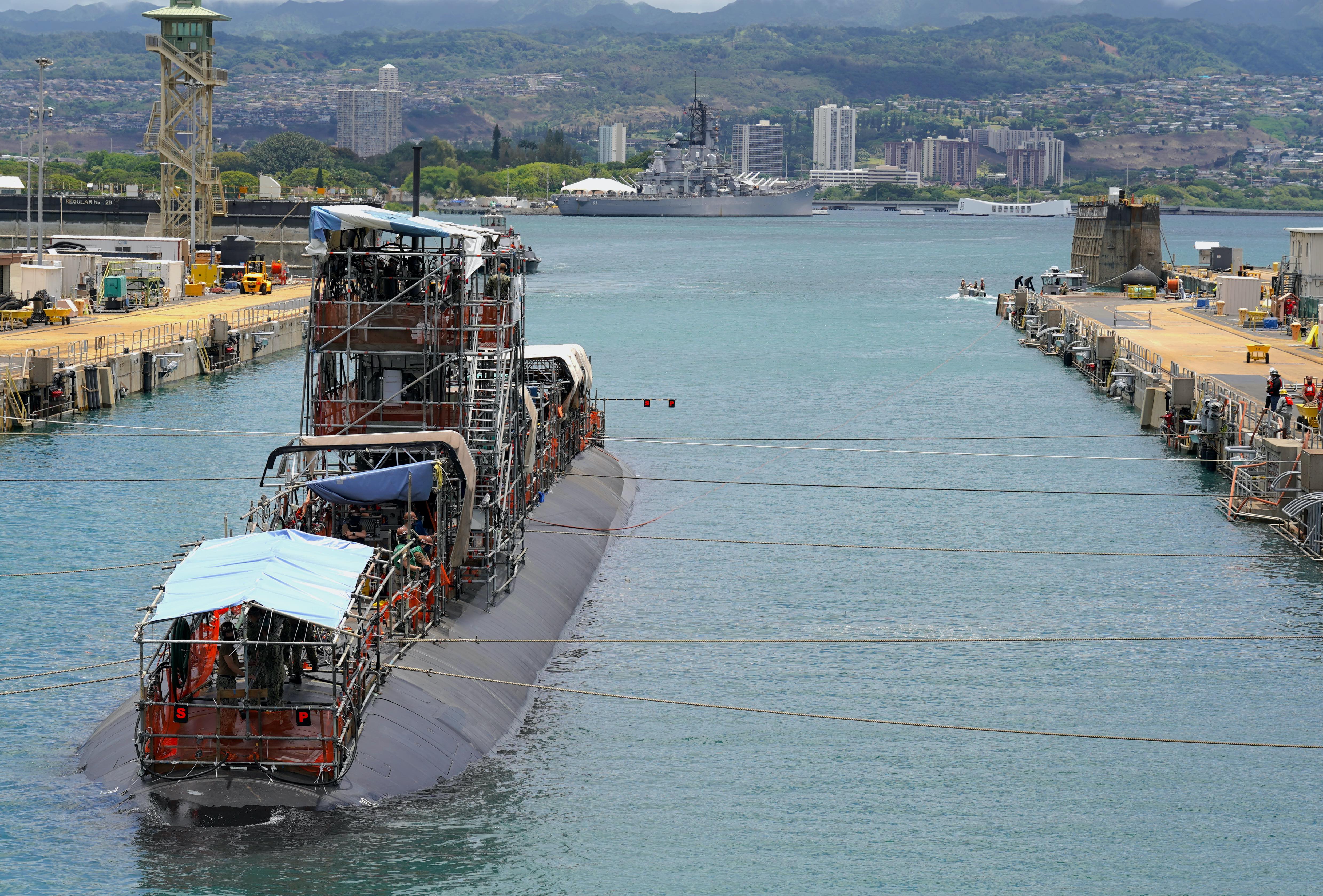 “In terms of accelerating, we’re looking for opportunities to accelerate. I think we’re rapidly coming through the modeling and simulation effort, we have an opportunity to pull back the development of our area development plans, although this has to be balanced with our Navy budget,” Douglas said last month at the Surface Navy Association’s annual symposium.

“But our other challenge with acceleration, whether or not we can actually achieve 10 years, is … we are required to conduct maintenance availabilities on submarines and carriers while we’re renovating the shipyards,” she continued. “So think about it in terms of living in your house while they’re doing a wholesale renovation, and moving you from room to room to room. So that’s the challenge that we’ll have in trying to accelerate, is there’s so many dependencies in between everything we do within the shipyards. But we’ll look for that opportunity.”

In addition to balancing yard modernization with ship maintenance work, the Navy also expects to pour a considerable amount of funds into the effort. The service anticipates the SIOP to cost approximately $21 billion across the 20-year timeframe.

Vice Adm. Michael Moran, the principal military deputy for the assistant secretary of the Navy for research, development and acquisition, last month said the service wants to ascertain what the individual shipyards need for the modernization initiative.

“Before we put money into it, let’s make sure we really understand what it is we want to get done, we have a good understanding of at least that 80-percent solution set before we step out and go do it,” Moran said at the ASNE conference. “We are committed absolutely to the SIOP, there’s no question about that. How we go about it, how we execute it and get it right is important.”

Congress, however, could direct the Navy to speed up the timeline.

Wittman argues that the Navy’s goal of building a larger fleet while also operating public shipyards that cannot accommodate the new Ford-class nuclear-powered aircraft carriers and Columbia-class ballistic missile submarines means the Navy needs to evaluate a timeline of 10 years instead of 20.

“If you’re building more ships, and you’re looking at the current capacity in the existing public yards, the question has to be: will we have the necessary capacity, not just 10 years from now if we cut the [Shipyard Infrastructure Optimization Plan] in half, but will we have the necessary capacity in 20 years? In 30 years?” Wittman said. “Because if you’re going to build at this rate and build this sized Navy, you have to be able to maintain those ships, and that becomes a real question too.”

One way the Navy could solve its issue of conducting maintenance while renovating the public yards is by moving some of that work to the private shipyards, according to Wittman. The service has already done so with some of its Los Angeles-class submarines.

“You can’t have a build rate of trying to get these ships built and achieving these numbers into the late 2030s and have a SIOP’s plan that doesn’t get your dry docks … as part of the public shipyards done until the 2040s,” he said. “The math just doesn’t work there, so as far as ship availabilities and getting them through the maintenance availabilities and back out to sea.”

Galinis and Wittman agree that the dry docks are one factor within the SIOP that the service could address sooner.

“Dry docks have to be the priority. And yes, you may have to move some work around, and that’s why you need to look at contingencies,” Wittman told USNI News. “You may have to say, ‘hey listen, maybe we have to push a couple work platforms, couple Virginia-class submarines, whatever, to the private yards as an interim to get the public yards to where they need to be.’ You have to do it, and you have to do it sooner than later.”

Galinis pointed to dry docks as a potential place where the Navy could speed up the timeline of the infrastructure initiative, as Block IV and V of the Virginia-class submarines enter the fleet.

“That’s really where we need to kind of spend some time and get those dry docks ready to accept those submarines when they’re ready to go into their first [major maintenance availability]. So that’s, you know, principally in Portsmouth [Naval Shipyard] right now and then out at Pearl [Harbor Naval Shipyard],” he said.

Wittman, who also serves as the vice ranking member of HASC, says the Navy also needs to consider not just the age and condition of its infrastructure, but also how the outdated yards contribute to employee recruitment and retention, since those same trained workers could instead work at the more modernized private yards.

Asked what Congress could do in the Fiscal Year 2022 defense policy legislation, Wittman said lawmakers could include provisions mandating the Navy assess both a potential 10-year timeline and moving more work to the private yards.

“I think to have directives for the Navy to look at ways to cut the SIOP’s plan time in half. Look at how they can create contingencies so if they have to create time where a dry dock is available for modernization, how would they do that, and look at alternatives, investigate those,” Wittman said. “Make sure that we are able to – if they need authorization to send those ships to the private yards, which I don’t believe that they do, but we would want to know if there’s some special provisions there that they would need – for us to be able to do that.”

“If there are costs associated with that, what would those costs be. I think all those things need to be looked at this year so that we can authorize them to chart a path to be able to cut the SIOP’s plan time in half,” he continued. “I mean, I don’t think that they have a choice. I think they’re going to have to do that. There’s no way that you can sustain a 405-ship Navy with the current capacity in the public shipyards. You just cant do it.”

It’s unclear what the Biden administration will do with the last administration’s FY 2022 shipbuilding proposal, which called for 405 manned ships by 2051, but Wittman has said House Republicans will continue pushing for a larger fleet.

While the timeline for the SIOP has become a key part of the discussion over the infrastructure initiative, Navy officials have emphasized their goal is to take the correct approach while balancing ongoing maintenance needs.

“How fast we go do this will be a debate as we go forward, but we just want to make sure we have a clear understanding of the work scope requirements set that we want to fund before we put it in the budget,” Moran said.