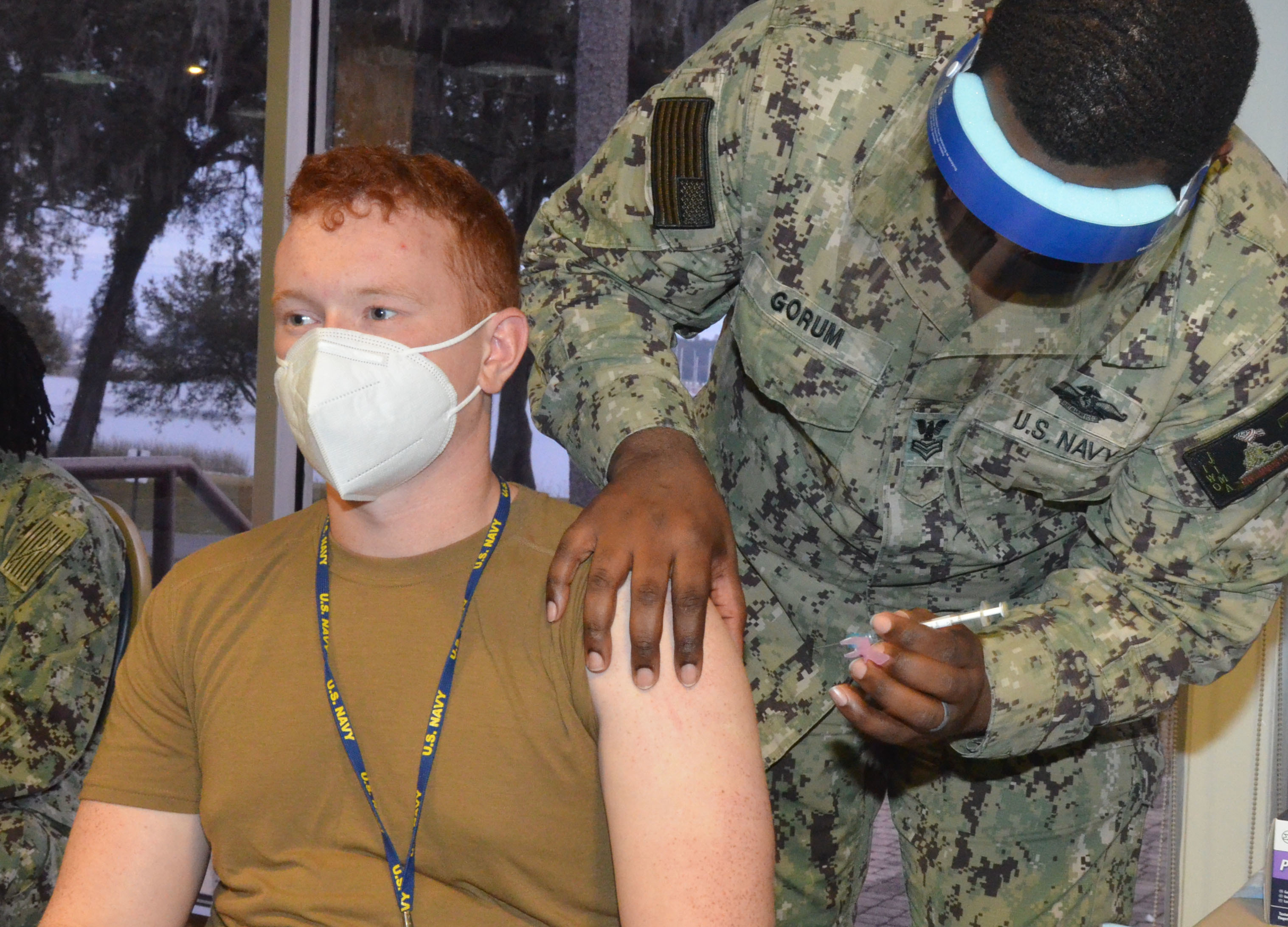 Aviation Boatswain’s Mate Airman Austin Pine, of the USS Iwo Jima, gets a COVID vaccine on Jan. 11, 2021. US Navy Photo

Out of the sailors who have been offered a vaccine for COVID-19, about 70 percent have taken the Navy up on the shots, according to information provided to USNI News by the service.

The rate, current as of late January, is better than the percentage of the national population who in December said they would get the vaccine if available, according to a December Journal of the American Medical Association study. Still, service leaders want a higher percentage of the sailors to accept the vaccine.

“We’re trying to get the facts out there to dissuade the disinformation that’s in social media and other places with respect to the safety of the vaccine,” Chief of Naval Personnel Vice Adm. John Nowell told reporters late last month.
“The [Chief of Naval Operations] and [Master Chief Petty Officer of the Navy] were the first to roll up their sleeves for the Navy, and we made that very public.”

The trick for leaders is to encourage sailors with a softer appeal because they can’t order sailors to take the shot. The Pfizer and Moderna COVID-19 vaccines are approved to be used under an emergency authorization from the Food and Drug Administration, and short of a presidential order, the Pentagon can’t compel troops to take the vaccine.

“We are doing a targeted survey of folks, a quick pulse survey. And we’re with commands where we see a higher declination rate, to try and understand better why do you not want to take it?’,” Nowell said.
“There’s myth, folklore and legend that you can’t get pregnant. That’s untrue. There’s myth that it will change my DNA. That is untrue.” 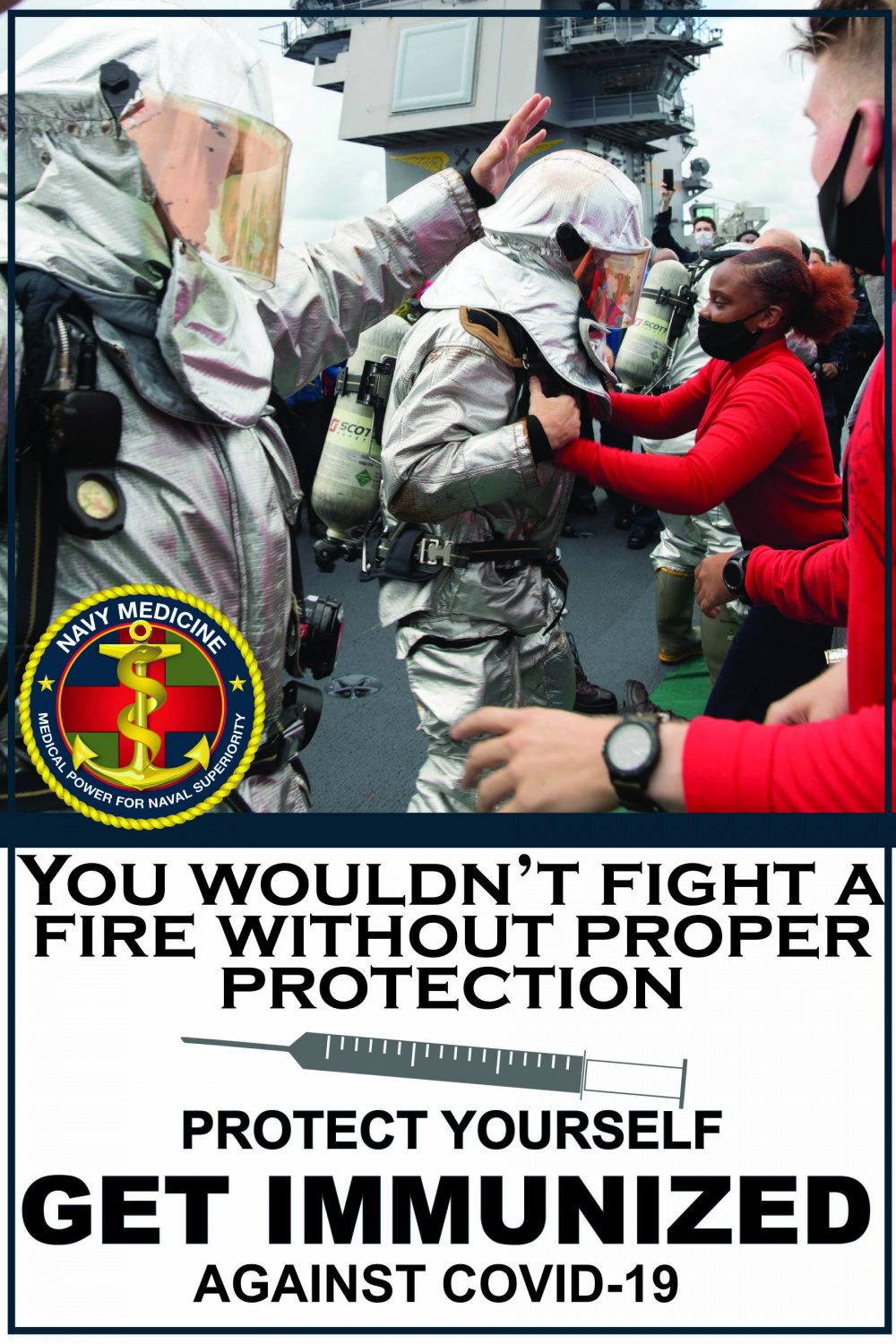 The Iwo Jima Amphibious Ready Group and the 24th Marine Expeditionary Unit are reporting a 90-percent take rate ahead of a planned deployment, while about 80 percent of sailors aboard the soon-to-deploy Eisenhower Carrier Strike Group, or about 5,000 sailors, have said they’d take the vaccine this weekend, Lewis said.

“The Navy provided a proof of concept for vaccinating sailors pier-side when we vaccinated sailors and Marines attached to Iwo Jima ARG at Naval Station Norfolk,” Rear Adm. Doug Beal, vice commander of U.S. Fleet Forces Command and the Fleet Vaccination Cell lead, said in a Friday statement.
”It was the first time a large group of personnel was vaccinated against COVID-19 outside of a hospital or [military treatment facilities] and aboard a ship.”

The Navy is in the early phases of crafting additional incentives for sailors but hasn’t locked down any specific initiatives.

“A lot of sailors that I know would much prefer being able to get a vaccine and then be safe to not have to do some of the other COVID risk-mitigation measures we put in place, like two-week quarantine,” Nowell said.

How the Navy’s numbers compare to the wider Pentagon aren’t immediately apparent.

When asked by USNI News this week, Pentagon spokesman John Kirby said the nature of the emergency FDA authorization made it difficult to track a global number.

“Because it’s not compulsory, there’s no central tracking system to keep track of those who are either refusing the vaccine or, in some cases, deferring their decision on the vaccine,” he said.

In late January, Joint Staff Surgeon Air Force Brig. Gen. Paul Friedrichs said, “in general, the trends are very similar to what we’re seeing in the U.S. population as a whole, that the older population has been more willing to take the vaccine. The younger population has been a bit more hesitant about it. … As we go forward and we educate our population about the safety of the vaccine, we hope and trust that that will allay some of the concerns.”