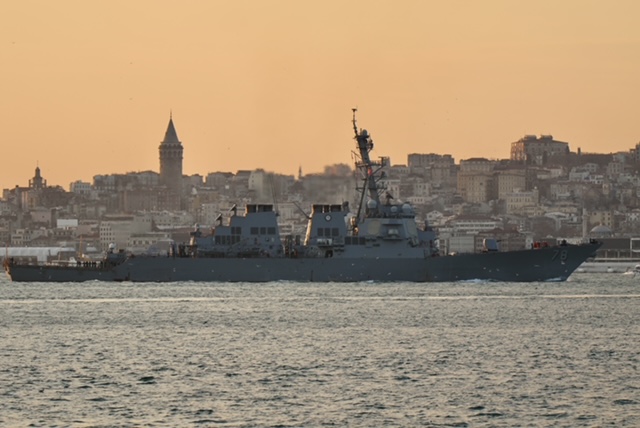 Two U.S. guided-missile destroyers are operating in the Black Sea along with a U.S. oiler, service officials announced on Thursday.

According to ship spotters USS Porter (DDG-78) sailed through the Bosphorus, joining USS Donald Cook (DDG-75) and the fleet oiler USNS Laramie (T-AO-203), which entered the region within the last several days.

Porter and Cook are part of the U.S. Navy’s forward-deployed quartet of destroyers based in Rota, Spain.

The ships are exercising with NATO air units in the region, including U.S. Navy P-8A aircraft from Patrol Squadron (VP) 46 and NATO Air Command aircraft E-3A Airborne Warning and Control System (AWACS), according to U.S. 6th Fleet.
“Every time our adversary changes how they operate, we stay one step ahead of them,” Capt. Joseph Gagliano, commander of Task Force 65, said in a statement.
“We maintain control of the sea by drawing from the best capabilities of the NATO alliance, and together we are guaranteeing stability in the Black Sea.”

Since the 2014 Russian seizure of the Crimean peninsula, the U.S. and NATO forces have maintained a regular presence in the Black Sea.

“The Black Sea is of strategic importance to NATO. Three Allies – Bulgaria, Romania and Turkey – are littoral states, while Georgia and Ukraine are close partners,” a NATO spokesperson said in a statement.
“In response to Russia’s illegal and illegitimate annexation of Crimea from Ukraine and its ongoing military build-up in the Black Sea, the Alliance has increased its defensive presence in the region and remains strongly committed to Black Sea security.”

Russian officials announced that the Russian military will track U.S. forces in the waters.

“The Russian Black Sea Fleet’s forces and equipment are tracking actions of destroyer USS Porter that recently entered the Black Sea, the Russian National Defense Management Center told reporters Thursday,” reported state-controlled TASS newswire.
“The Russian Foreign Ministry has repeatedly noted that presence of ships in the Black Sea that belong to states outside of the region does not boost stability there.”