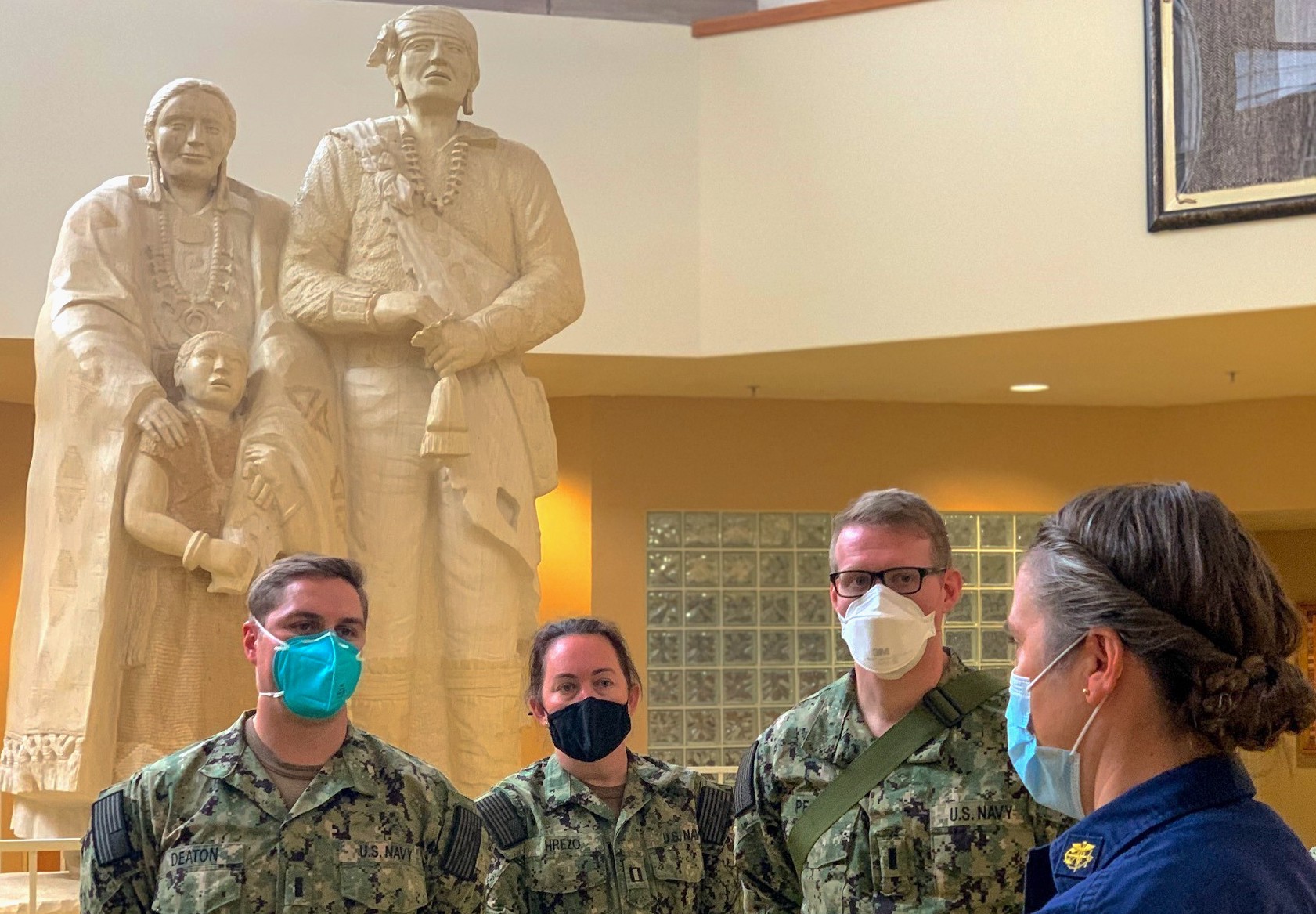 As states across the U.S. braced for a winter resurgence in COVID-19 cases, some Navy medical personnel got mid-December deployment orders to an unusual destination: Navajo Nation.

Twenty Navy nurses and four respiratory therapists deployed to assist two hospitals in the small, rural towns of Chinle, Ariz., and Shiprock, N.M., where the coronavirus pandemic threatens to overwhelm local health services already short of highly-skilled. The medical deployment fills a need identified by the U.S. Department of Health and Human Services and the Indian Health Service to provide critical-care personnel in Navajo Nation, home to some 175,000 who live across 17.5 million acres in northeastern Arizona, northwestern New Mexico and southeastern Utah.

As of last week, Navajo Nation reported 25,383 positive cases and 871 deaths. Tribal leaders have issued stay-at-home orders and weekend lockdowns to help curtail the spread of the SARS-CoV-2 virus in a pandemic that’s killed nearly 376,000 and infected 22.6 million in the United States. More than 1.9 million people have died globally of the virus.

Chinle, a town of 4,500, is home to a VA clinic that serves a Navajo community with deep military ties, and it’s the gateway to the archaeological wonders in Canyon de Chelly National Monument.

The Navy medical team’s arrival was timely, coming just as the surge threatened to fill every available ICU bed and potentially delay available care for sick patients. The town’s 60-bed hospital includes a 22-bed respiratory care unit, which has provided the 21-bed critical-care unit for COVID-19 patients and a separate room used solely for intubations. A separate surge unit is planned just in case.

The Navy personnel “allowed us… to expand the number of beds available in the inpatient unit at Chinle,” Johanna Bahe, chief nurse executive and acting area nurse consultant for the Navajo Area Indian Health Service, told USNI News. “Before they arrived, we had to limit the number of beds, the number of patients that we could take into the unit. But since they’ve come, we’ve been able to expand and utilize all the beds.”

“Our daily positive numbers are high,” Bahe said, but “we have not reached a point where we don’t have a bed for a patient here in Chinle – yet – and hopefully that does not happen.”

Arizona is one of the nation’s COVID-19 current hot spots. As of Sunday, its seven-day average of new cases was the highest in the nation, at almost twice the U.S. average. More than 90 percent of the state’s ICU beds were filled.

After the initial spring cases, a second wave of COVID-positive patients prompted the request in late October for medical support to Navajo Nation. “Since then, it’s just continued to increase,” Bahe said, and with more COVID-positive requiring inpatient care, “that’s when we started looking at what resources were available.”

Chinle has had a revolving door of patients. In one recent week, ICU teams cared for 18 to 20 patients daily. Patients needing ventilation support and more specialized care usually are sent to higher-level-care hospitals farther away, and “once we transferred those patients, there would be another patient waiting in the ER to be admitted to the unit,” she said. But with Navy teams in place to support a higher patient load, “we are able to take more patients and not transfer them if we hit our capacity.” Some discharged patients who need monitoring are sent to an alternate care site in Chinle.

Even before the pandemic hit, the Chinle region had a shortage of nurses and respiratory therapists, in particular. The Four Corners region is desolate and rural – the town is 215 miles north of Flagstaff, Ariz., and 230 miles west of Albuquerque – and local hospitals don’t provide specialty critical care and haven’t had enough trained personnel to fully staff every ICU bed.

While many of their nurses trained as medical/surgical nurses or ICU nurses, “one of the challenges that we have on Navajo is recruiting and retaining any kind of specialty nurses and services in general with providers,” Bahe said. “So for Chinle and for some of our New Mexico partners, like in Gallup and Shiprock, we really were lacking the knowledge that was needed to take care of some of the patients here. Even more so when it was difficult to transfer out a patient to higher-level care,” which requires nurses experienced working with patients on ventilators or IV and medication drips.

In the COVID unit 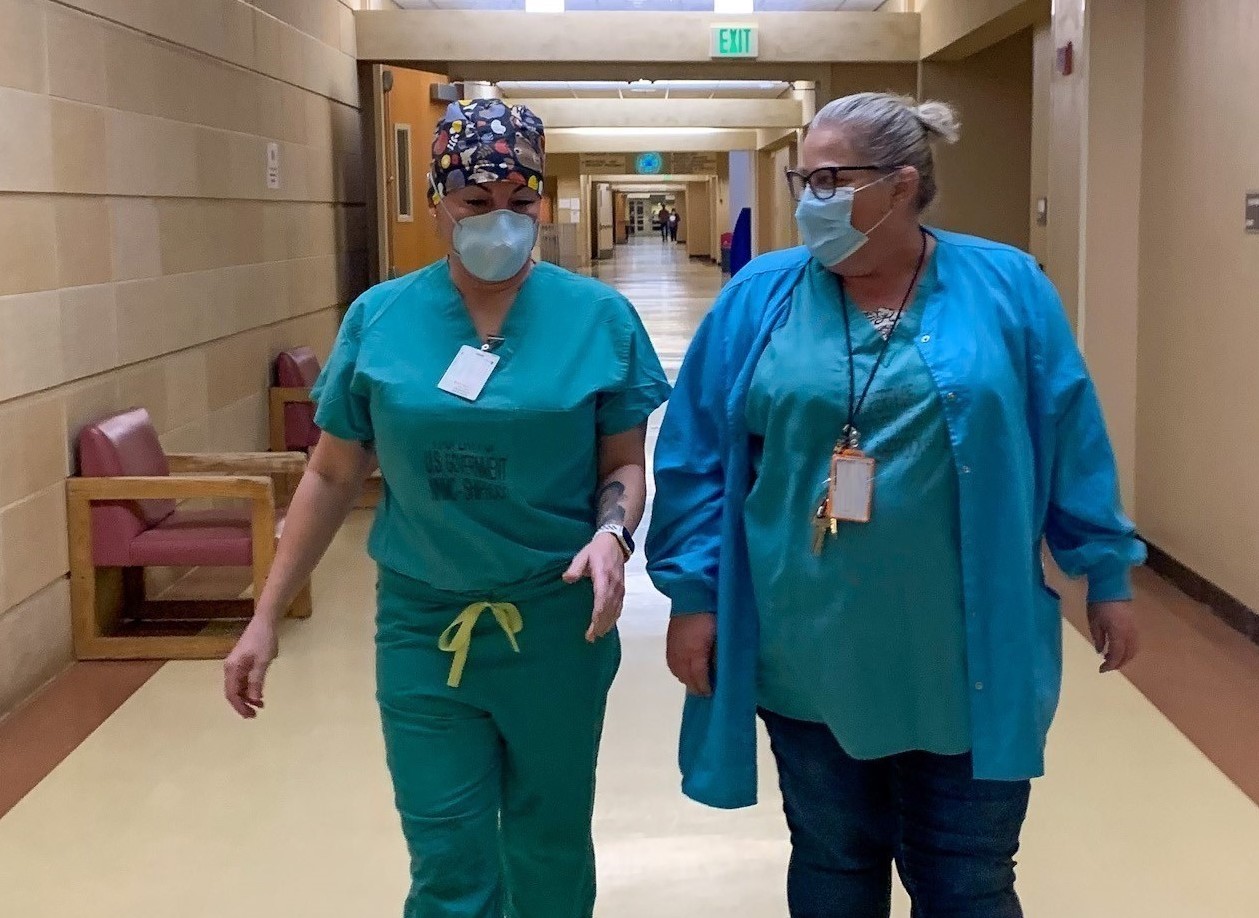 While some members of his team had experience caring for COVID-19 patients, the deployment to Chinle marked a new mission for Cmdr. Frank Jones, a critical-care nurse from Fort Belvoir, Va.

“Of course I was scared thinking of catching COVID, but I was also elated, thinking we’re going to go and help the Navajo Nation and knowing their history and their contribution” to the Marine Corps and the Navy during World War II, said Jones, the senior officer-in-charge of Expeditionary Medical Facility “Juliet” Team from Portsmouth, Va.

The deployment, he said, “has an extra-special feel to it, because we’re helping a Native American group that’s given so much of themselves to the United States.”

Jones said he’s found a welcoming community in Chinle. “They’ve been extremely appreciative. They are very grateful,” he said. “Their eyes widen lighten up when you tell them you’re a U.S. Navy nurse, and you’ve come out here to help them.”

He spends his 12-hour shifts providing bedside care to sick patients. Many suffer breathing difficulties but treatments vary based on their symptoms. Some get a high-flow nasal cannula called Vapotherm “that’s really helping them maintain an adequate oxygenation level in their blood,” he said. “Most of them come down with COVID-related pneumonia, and there’s a lot of inflammation and pain.” He’s learned about prescribed therapies such as corticosteroids like Dexamethasone, anticoagulants to prevent blood clots and deep vein thrombosis, and monoclonal antibody IV infusions, one of the newest FDA-approved emergency treatments.

“It’s been kind of surreal (and) enlightening,” he said. “I now can say I am fully immersed to know what it’s like to be in a COVID unit, with 22 beds, patients who are very sick. They require a lot of care.”

That labor-intensive work also takes a heavy emotional toll on medical workers, especially ICU staffs during this pandemic. Fatigue, exhaustion, burnout and post-traumatic stress are not uncommon, according to the CDC, and that’s drawn attention to the need for mental health counseling and other services for healthcare workers and first responders.

The Army has provided religious support teams and behavioral health specialists to support the Navajo Nation mission, said Capt. Tony Nelipovich, an activated reservist who is the Navy Emergency Preparedness Liaison officer to the state of Arizona. These teams include chaplains, clinical health specialists and others “interacting with and touching base and checking on the medical providers,” said Nelipovich, a surface warfare officer by training who worked the coordination with the Navajo Nation to provide the requested 20 ICU nurses and four respiratory technicians.

A ‘sense of relief’ 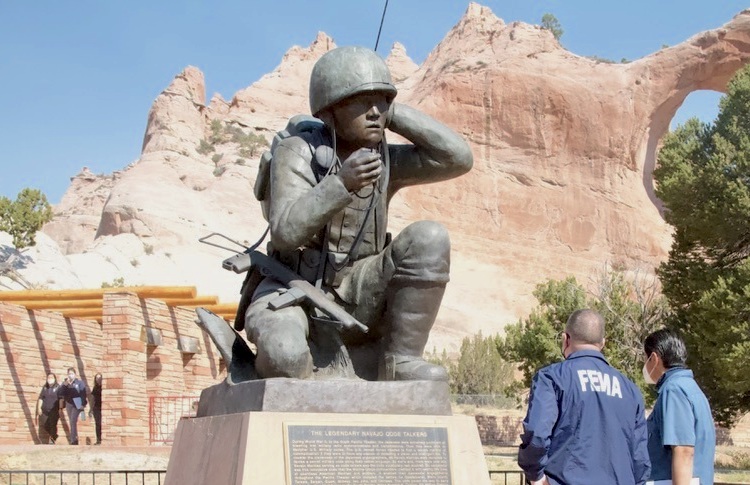 Last summer, Jones said, EMT-Kilo and EMT-Juliet were put on prepare-to-deploy orders lasting through March 31, 2021. On Dec. 16, with orders in hand, he flew to Albuquerque and drove to Chinle, where he met up with other active-duty members from Fort Belvoir, Walter Reed National Military Medical Center and Portsmouth Medical Center. After a short orientation, they started their 12-hour shifts on Dec. 18 and 19, returning to local hotels near the hospital.

Their presence hasn’t gone unnoticed by locals, whether in Chinle’s only grocery store or around the small town. “They certainly appreciate it and are glad that we’re here,” Nelipovich said.

In just the first three weeks, Navy nurses have helped train and mentor the staff, which “has really increased the confidence of our nurses, the permanent nurses that work here and plan to stay here after the pandemic,” Bahe said. “They brought a lot of positivity to the unit and a sense of relief for our nurses here in Chinle.”

In turn, she said, the Navy nurses and respiratory therapists learn “about our culture, about the challenges we face as a rural health care organization and some of the issues that we have to be creative and innovative in taking care of our patients in a rural setting. So it’s a bidirectional kind of sharing of knowledge.”

The scene is similar over in Shiprock, 85 miles away, where the Navy team and hospital staff work an eight-bed COVID-19 ward, for now, although the hospital can surge to treat 15 patients if needed. “The relationship with the embedded nursing staff here has been great from the get-go,” Lt. Cmdr. Sarah Jagger, a critical care nurse and Rural Rapid Response team leader, said in a Jan. 8 Defense Department news article.

Jagger is among several Navy nurses who deployed last year in the pandemic’s early months to New York and Texas. “Thankfully we are seeing better outcomes than we did when COVID first hit,” Jagger said. 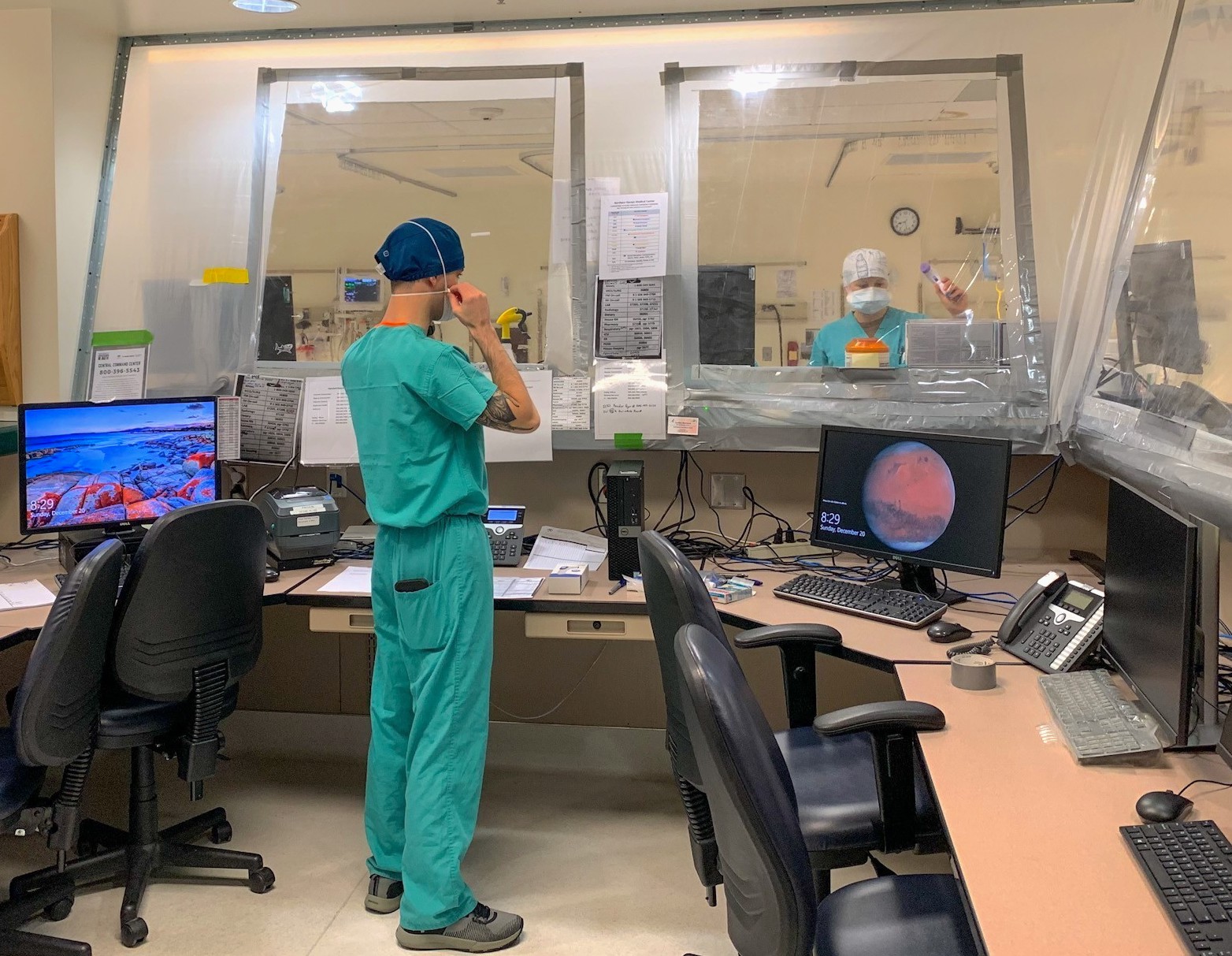 While some anticipate the deployment would be for two months, the initial order was for a 30-day mission, “so the 30 days is coming up soon,” Bahe said. With the continued high positive caseload, “we’ve requested an extension” of the DoD support, she said Friday. “We’re still up there. We did request for an extension for our staff that are here currently, and that includes the respiratory therapists.”

The hospital’s nurses “ask me, when are they leaving? Are we going to keep them?” she said. “They are kind of anxious, because they’re… anxious to see if their extension is going to get approved or not.”

“The current mission is for 30 days,” she added. “There is a current request from the Navajo Nation, through Health and Human Services, to have these same providers stay longer. That’s going through the review/approval process now, so there’s no formal outcome yet. Hopefully we’ll know more about that in the next week or two.”

“Nobody is clamoring to go back home just yet. They’re asking to see if we go off to Los Angeles,” another COVID hotspot, Jones said. “We’re going to be here as long as Army North needs us here and the mission dictates.”