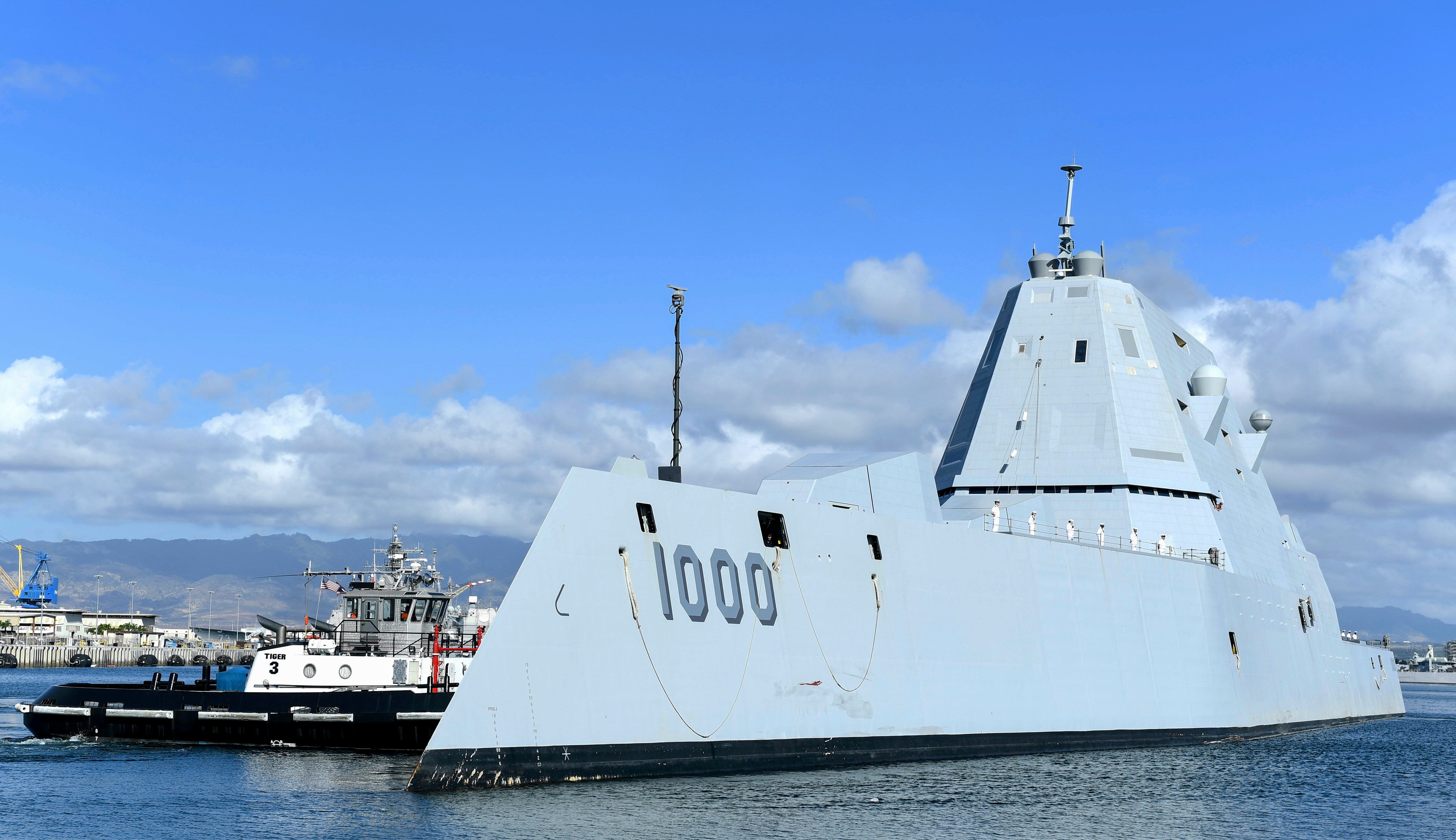 Sailors man the rails aboard the guided-missile destroyer USS Zumwalt (DDG-1000) in 2019 as the ship pulls into Joint Base Pearl Harbor-Hickam. US Navy Photo

The Navy is taking steps to integrate its Zumwalt-class destroyers and its unmanned surface vessels into operational plans and will likely include both in a major Integrated Battle Problem exercise this spring.

Both sets of ships currently fall under the control of the Surface Development Squadron-1, which is responsible for overseeing USV and Zumwalt fleet introduction efforts. Though USS Zumwalt (DDG-1000) was commissioned in October 2016, it is still working through testing and trials and has not yet started working up for a maiden deployment.

Zumwalt‘s involvement in the upcoming Fleet Battle Problem event – which USNI News previously reported would focus on unmanned integration – could help create a better understanding of what that first deployment could look like.

“Right now, we’re looking at how do we get this ship involved in the integrated battle problem in the spring, working with some of the medium USVs we have as well,” Vice Adm. Roy Kitchener, commander of Naval Surface Forces, told reporters during a Jan. 8 media call ahead of the annual Surface Navy Association symposium.

Kitchener added that recent Zumwalt-class work included required testing, such as heavy weather testing, but he looked forward to upcoming thought and experimentation regarding how to actually operate the ships in overseas missions.

He said the Navy also recently held a DDG-1000 maintenance summit and would hold a second one soon to discuss how to get the spare parts stream flowing to the waterfront, what components are unique and may cause the most maintenance and logistics challenges, how the Navy wanted to split up maintenance responsibilities between sailors and contractors, and more. Though decisions haven’t been finalized, Kitchener said he hoped to see a sailor-centric maintenance model even though Zumwalt DDGs are so different than other ships in the fleet.

As for the USVs, the SURFDEVRON currently has one Sea Hunter medium USV in its control and is preparing to take custody of a second one this year.

“We’ve integrated Sea Hunter now [with] several different packages: we tried an [antisubmarine warfare variable depth sonar] on one, we were actually trailing an array. We tried [intelligence, surveillance and reconnaissance] packages, surveillance stuff, giving us that maritime domain awareness. And we continue to do that with our SURFDEVRON-1, it’s been actually pretty exciting,” Kitchener said.
“We integrated them into our SWATT exercises, our advanced phase exercise that we do with our destroyers. And then we’re also looking to do an integrated battle problem this spring where we’ll use some of that capability as well.”

Though Kitchener said Zumwalt and unmanned integration are near-term opportunities to increase the lethality of the fleet, he said in the longer term he’s eyeing hypersonic missiles and an integrated combat system to tie the whole fleet together.

Sea Hunter, an entirely new class of unmanned sea surface vehicle developed in partnership between the Office of Naval Research (ONR) and the Defense Advanced Research Projects Agency (DARPA), completed an autonomous sail from San Diego to Hawaii and back—the first ship ever to do so autonomously. US Navy Photo

On missiles, he said the Pentagon’s conventional prompt strike missile program will go on submarines first, with potential to field them on Zumwalts or other surface ships later down the line. In the nearer term, the greater potential to put hypersonic missiles on a surface ship comes in the form of the Standard Missile-6 Block IB, which will take the highly successful SM-6 and swap out the 13.5-inch motor for a 21-inch motor to allow greater speed and range. Kitchener said he was encouraged from what he’s seen in the SM-6 effort so far.

The Pentagon’s CPS round is too large to fit in the Mk 41 vertical launching system cell on most ships today, but larger missiles with more capability will be the way of the future, Rear Adm. Paul Schlise, director of the surface warfare division on the chief of naval operations’ staff (OPNAV N96), said during the same call. Zumwalt-class DDGs could be integrated with larger missile launchers during future maintenance periods he said, and the Navy is keeping the larger missile diameter in mind while working on the Large Surface Combatant program.

“We are working on the Large Surface Combatant top-level requirements right now, [they] were just recently approved. And we think a version of a larger diameter launcher that can handle a round like CPS will absolutely be part of that platform,” Schlise said.

Schlise also spoke about the integrated combat system program, saying “it’s a little bit aspirational at this point, but the requirements are coming together and that is slightly a further downstream game-changing capability that’s going to help our fleet move, and I’m talking all platforms – aircraft carriers, surface combatants, amphibs, you name it, unmanned systems – all working off the same combat system and helping us pursue the fight at machine speed.”