The Navy on Friday issued a posthumous Navy Cross to Lt. Thomas Conway, a chaplain who died after the sinking of the World War II cruiser USS Indianapolis (CA-35).

Speaking during a ceremony at Lt. Thomas Conway’s church in Waterbury, Conn., Navy Secretary Kenneth Braithwaite recounted how the chaplain helped his fellow shipmates after their cruiser sank into the ocean.

“We all know the story, or we should, that in the next three days, Thomas Conway swam from group to group of the survivors, encouraging them, inspiring them, offering baptism or last rites,” Braithwaite said. “Father Conway wasn’t a young man, but he gave his all in his duty as he swam from group to group. Three and a half days in the water. Nothing to drink. Nothing to eat. And yet he went on.” 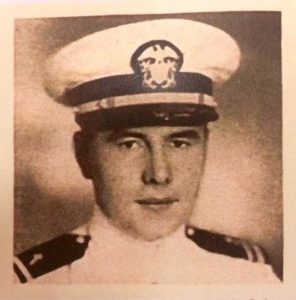 Conway and his shipmates were serving aboard Portland-class heavy cruiser Indianapolis when it was struck by Japanese torpedoes on July 30, 1945. Three-hundred sailors died within 12 minutes of the torpedoes hitting the ship, Braithwaite said, and 900 sailors ended up in the water when the vessel sank. The sailors spent several days in the water and many, including Conway, died before 316 survivors were rescued.

Advocates had long worked to obtain the Navy Cross, which is the service’s second-highest award, for Conway. According to a 2018 report in The Associated Press, the service could not award to the chaplain the Navy Cross because no senior officers Conway served with were alive to endorse the bid, as mandated by Navy rules.

Braithwaite apologized for this during Friday’s ceremony.

“But I am here today to correct the record and to right a wrong. And I’m also here to send a message that we shall never forget. I want every sailor and every Marine who has served, is serving or will serve, that the leadership of the Department of the Navy will not forget their courage, their honor, and their commitment,” Braithwaite said.

“Today, ladies and gentleman, the Navy is here, I am here, to say that we are sorry,” he continued. “We are sorry for not recognizing the heroism, the dedication, and the valor of one of our own.”