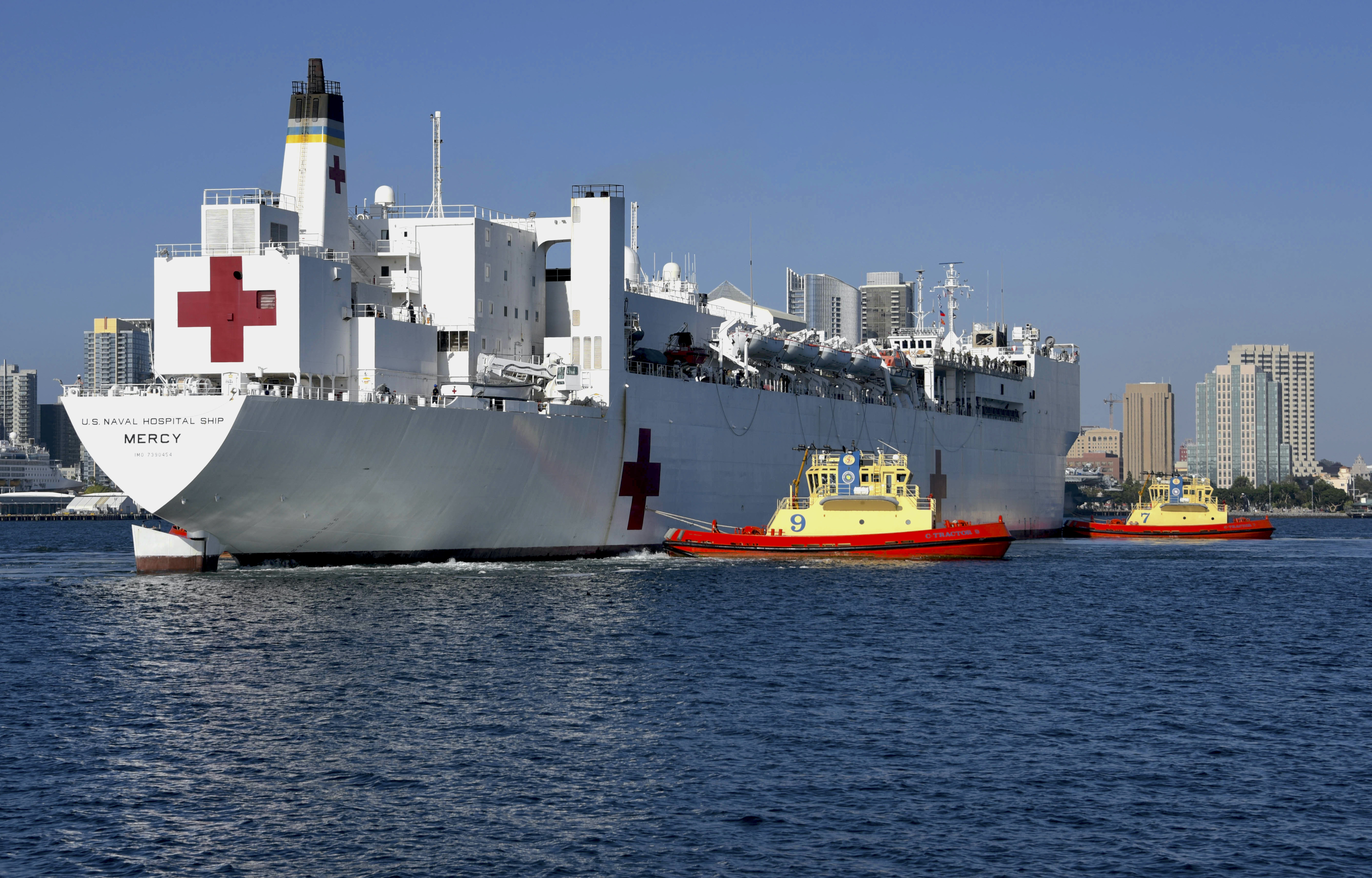 Despite worsening COVID-19 infection rates on the West Coast and discussion among local leaders in California about the state requesting a Navy hospital ship to ease the strain on area hospitals, the Navy’s West Coast hospital ship is in maintenance and unavailable for tasking for the next couple months.

USNS Mercy (T-AH-19) has been undergoing major structural work since July, with the ship ripped wide open at times during its maintenance period. The work will help the hospital ship continue operating until its planned end of life in 2036 and will help it keep up with changes in naval aviation, but the work comes at a time when West Coast hospitals are near or at capacity and looking for a relief valve.

“The hospital ship USNS Mercy (T-AH 19) is currently located at Vigor Industrial shipyard, Portland, Oregon, with a small complement of civil service mariners where it has been undergoing a major overhaul since July 2020,” Military Sealift Command spokesman Tom Van Leunen told USNI News today.
“The overhaul work aboard Mercy is significant and includes a flight deck upgrade to operate with the V-22 Osprey tiltrotor aircraft, lifeboat and boat davit upgrades, and substantial propulsion and structural work commensurate with her service life extension to 2036.”

“The current maintenance period is scheduled to complete in the Spring of 2021 followed by a month of sea trials and other post-maintenance testing and training at which time the ship will return to its normal readiness level of ROS-5 meaning the ship will be ready to deploy for tasking within 5 days of any future activation,” he continued.

Today, the pandemic in Southern California is much worse, with hospitals essentially full and ambulances being told not to bring patients experiencing cardiac arrest to hospitals if emergency medical technicians can’t resuscitate them in the field. Just 1,319 intensive care unit beds are open across the entire state – with most regions having none available – and the state’s COVID positivity rate sits at 15 percent today.

USNI News reported that Los Angeles County supervisor Janice Hahn wrote to California Gov. Gavin Newsom to ask him to request help from Mercy and its medical staff amid rising COVID positivity rates, hospitalization rates and deaths in the area.

However, Mercy is unlikely to be available for tasking until the end of April at the earliest.

Still, the Navy has other options for supporting local communities if called upon to do so.

The Navy would typically deploy an expeditionary medical facility (EMF) if called upon to respond to a humanitarian crisis in another country, sending a range of doctors and supplies to handle traumas, illnesses, dental emergencies and more. In this case, the need within the U.S for the COVID-19 pandemic isn’t for surgeons and specialists but rather for nurses and respiratory technicians, he said. So the Navy adapted its smaller Rural Rapid Response Team construct – usually one physician, five nurses and a respiratory tech – stripped out the physician and sent four teams of six to Navajo Nation following a formal request to help deal with the extensive spread of the virus there.

Applehans said requests for medical help from governors would come in through the Defense Security Cooperation Agency process. FEMA would take the request and send it to a federal department, and any requests coming to the Department of Defense would operationally fall under U.S. Northern Command.

Pentagon spokesman Air Force Lt. Col. Ken Hoffman told USNI News today that “the Department of Defense continues to work closely with FEMA and [the Department of Health and Human Services] to provide medical capabilities when requested by a State and approved by the Department.” He would not say whether any additional requests had come in beyond the Navajo Nation mission.