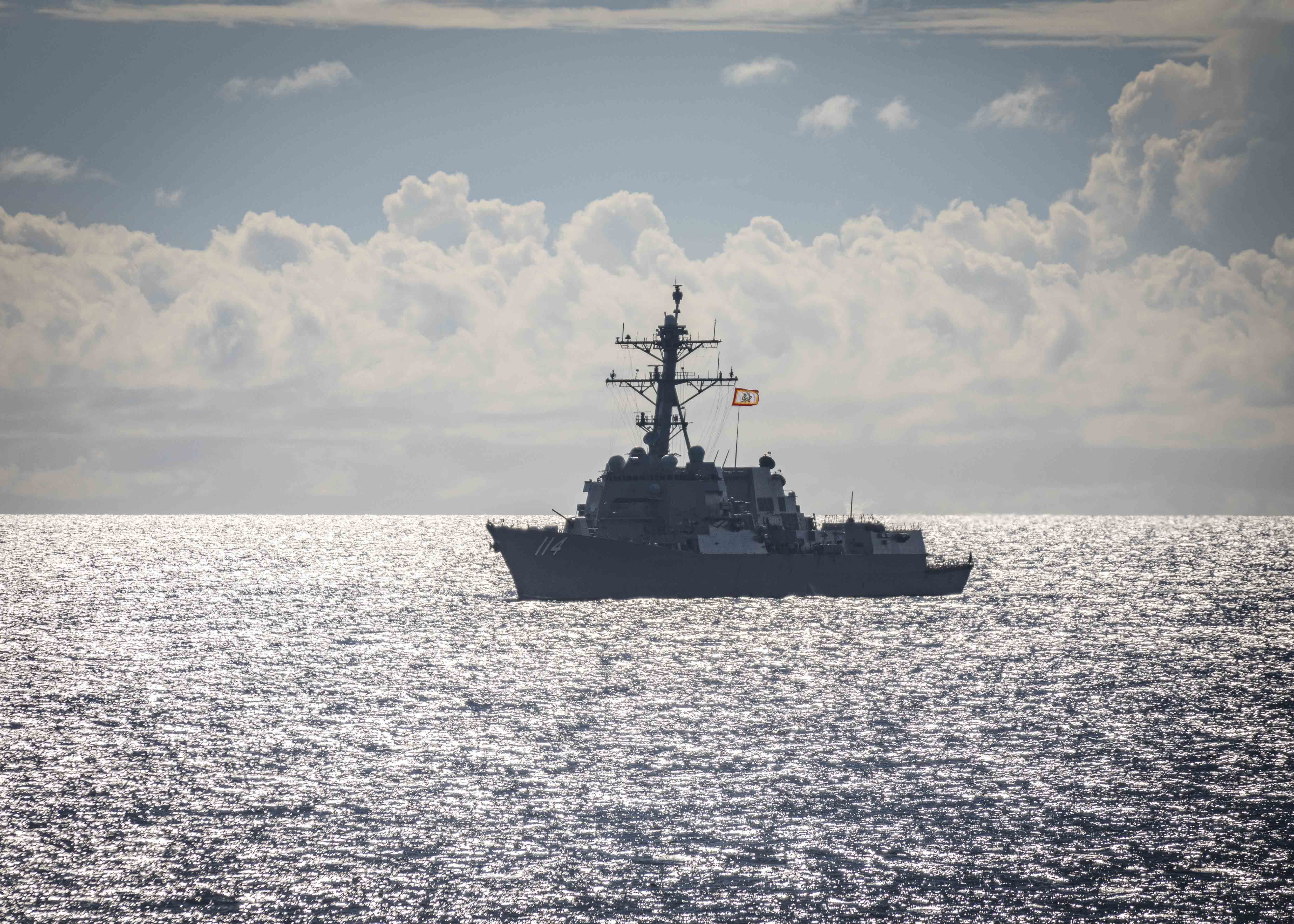 The Navy’s annual tradition of writing its first deck log of the New Year in verse homed in on the global pandemic and how it affected the crew of one Pacific-based guided-missile destroyer.

USS Ralph Johnson (DDG-114) was the service’s first vessel to enter 2021 and carried on the more than century-old tradition of making a short poem out of the standard report, according to a news release from U.S. 7th Fleet.

Electronics Technician 2nd Class Hailey Coop penned the poem for the entry log, which describes the crew’s ongoing handling of coronavirus, a drug seizure and piracy.

“Our time on deployment was supposed to be fun./ But then case Ms. Rona, and oh how she’s won./ She took all our ports and made us a bubble./ From what we can tell she has given us nothing but trouble,” Coop wrote. “She made us wear masks and clean all around./ You would not believe all the dirt that we found.”

The poem also mentions a seizure, likely a drug interdiction in the Arabian Sea reported earlier this month by The Maritime Executive.

“Getting to write the poem for the New Year’s deck log entry on our maiden deployment, especially since I’m a plank owner and have been a part of everything since the ship was commissioned, is pretty great,” Coop said in a statement. “It’s even better knowing that it’ll be the first deck log poem of 2021.”

Ralph Johnson is deployed as part of Destroyer Squadron 9, which is operating with the Nimitz Carrier Strike Group. The bulk of the strike group were operating off the Horn of Africa earlier this week, according to the Dec. 28 USNI News Fleet Tracker.

“The ball may be dropping in time square.
Onboard Ralph Johnson we’re still in the middle of the ocean somewhere.
Our time on deployment was supposed to be fun.
But then came Ms. Rona, and oh how she’s won.

She took all our ports and made us a bubble.
From what we can tell she has given us nothing but trouble.
She made us wear masks and clean all around.
You would not believe all the dirt that we found.

Everyone is hiding and in quarantine.
Why is it so hard to find a vaccine?
Our crew is still working because we’re essential.
The trips that we take are quite confidential.

We boarded a small boat and gave them a fright
Searched top to bottom all day and night.
We seized everything the law deems illegal.
There was so much you could fill a cathedral.

We allowed scary pirates to come aboard our ship.
They said they would have us all cleansed in a zip.
Opened their mouths and ate our wogs like little snacks.
After they spit them out they called them all shellbacks.

No mission or Pirates can stop our team.
We are closer and stronger than we all may seem.
A family of warriors is hard to bring down.
We will keep fighting until the next year rolls around.

Our mission out here is to following all orders.
We could not carry on without our supporters.
To our supporters at home and our families who need us.
We are coming home soon and that you can trust.

Continue the watch. U/W as before.
It doesn’t matter if you are tired to the core.
Independent steaming in the Pacific Ocean.
Only Ralph Johnson can cause such commotion.

No other ships are out here showing their presence.
The only ones out here are just us peasants.
Engineering plant status is as follows: 1 & 2 GTG’s online, 2B GTM’s online, 2 and 3
A/C units online, No. 5 fire pumps online, 1, 3, 4 5 SWS pumps online.
Engineers claim that everything’s fine.

Condition 3 readiness is what we achieve.
The crew is so ready to take leave.
Modified zebra set.
That you can bet.

EMCON Delta set.
All objectives were met.
All Nav lights are bright.
So anyone out there will see us alright.
The OOD is LTJG Miller. The Captain is tired and off the bridge for the night.

We traveled 421.05 NM throughout this day.
Everyone’s excited to be home, it’s not far away.
The work and the struggles have made us both happy and sad
Thank you 2020 for all the memories you had.”