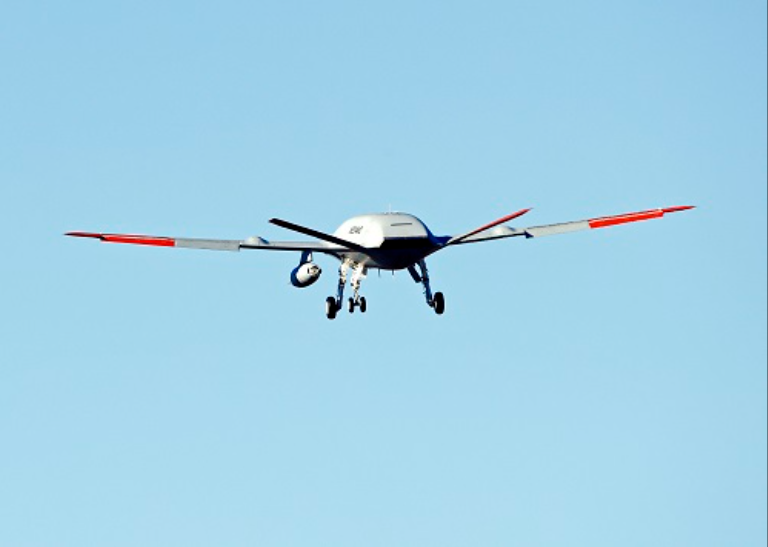 Boeing’s prototype for its naval unmanned aerial tanker proved this week it can operate with the refueling system that will give gas to the carrier air wing, the company announced.

Taking off from the company’s test site at the MidAmerica Airport in Illinois near St. Louis, Mo., the MQ-25A Stingray prototype flew for two and a half hours with an aerial refueling store (ARS) slung under its wing.

“To see T1 fly with the hardware and software that makes MQ-25 an aerial refueler this early in the program is a visible reminder of the capability we’re bringing to the carrier deck,” said Dave Bujold, Boeing’s MQ-25 program director said in a statement. “We’re ensuring the ARS and the software operating it will be ready to help MQ-25 extend the range of the carrier air wing.”

The MQ-25 T1 prototype was built by Boeing in 2014 when the company was competing for the Unmanned Carrier Launched Airborne Surveillance and Strike (UCLASS) and has been used by the Navy and the company for testing ahead of the first contracted engineering models.

In 2018, Boeing bested Lockheed Martin and General Atomics for an $805 million contract to build the first four Stingrays. In April, the Navy exercised contract options worth $84.7 million to buy three more MQ-25As.

The redesignated tanker had its first flight last year and has spent its time working through a Navy testing regime, according to Boeing.

“That is a tremendous asset that the team has… Getting it back up in the air with refueling pod and doing more flight testing earlier, I think is a great benefit to the program,” James Geurts, the Navy’s top acquisition officer told USNI News in July.
“It’s a good example of the team taking advantage of an opportunity to take this kind of early bird get it in flight, learn lessons, figure out different facets of the program.”

The plan is for the service to buy 72 of the aircraft for about $1.3 billion to relieve the stress on the Navy’s fleet of F/A-18F Super Hornets – the current refueler for the carrier air wing. The service had said it wanted to field the tanker by 2024 but has backed off a specific time frame.