The first unmanned tanker to operate from an aircraft carrier is set to be the first major program in the Navy’s emerging unmanned campaign plan, the service’s top acquisition officer told reporters on Thursday.

The Boeing-built MQ-25A Stingray will be a key element in the Navy’s early iterations of its unmanned campaign plan – the latest direction on how the service’s developing unmanned aerial, surface and undersea platforms will operate in concert, James Geurts said.

“We’ve got a fairly large campaign going on right now. How do we really integrate all of these unmanned assets, under the water, on the water, above the water holistically across the fleet?” Geurts told USNI News.
“[MQ-25A] is going to be one of the first major systems out there and we’re now weaving that into this larger unmanned campaign plan.”

The latest plan is designed to set goals for individual platforms to create criteria to see if the unmanned systems fit into achieving those objectives, USNI News understands.

“What I’ve found is that we didn’t necessarily have the rigor that’s required across a number of programs that would bring those together in a way that’s driven toward objectives with milestones,” Chief of Naval Operations Adm. Mike Gilday told Defense News.

The basic objective of the MQ-25A is to provide relief for the Navy’s fleet of Super Hornets that have been the de facto tanker for embarked carrier air wings. In the recent past, up to 25 to 30 percent of the flight hours of Super Hornets have been devoted to serving as a tactical refueler for the air wings. The MQ-25A is planned to deliver up to 15,000 pounds of fuel at 500 nautical miles, USNI News understands.

The narrow mission of the MQ-25A is scaled back from a more ambitious program a decade ago that would have created a low-observable, long-range unmanned strike aircraft that would have launched from the carrier. Two Northrop Grumman X-47 prototypes successful launched and recovered from USS George H.W. Bush (CVN-77) in 2013. Naval Air Systems Command canceled the testing program in 2015.

The Navy has planned to buy 72 Stingrays with a total cost of about $13 billion as part of a plan to alleviate the refueling burden on its existing fleet of F/A-18F Super Hornets. Boeing won a $805 million contract in 2019 for the first four airframes and a $84.7 million contract modification in April for three more airframes. 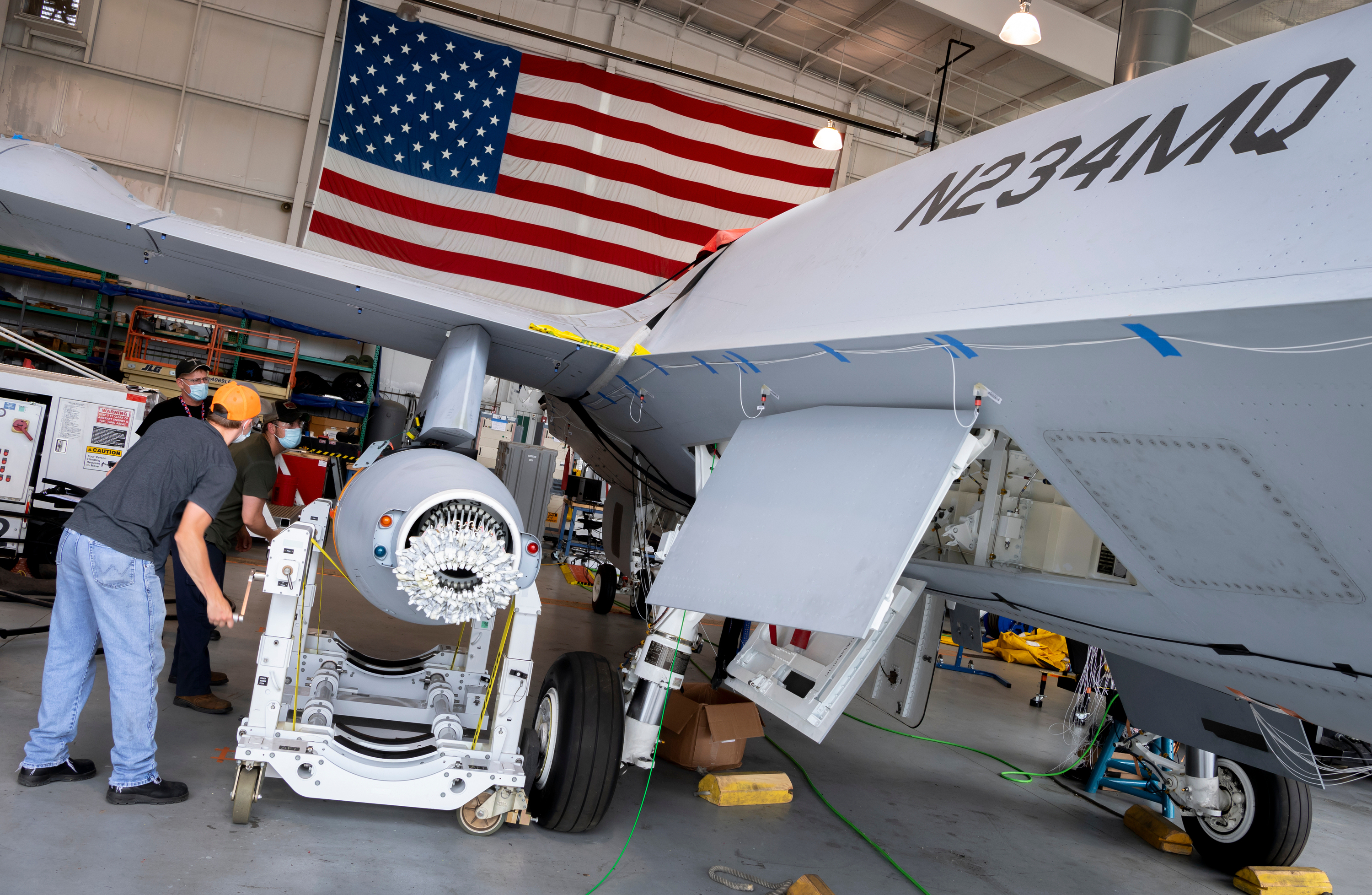 Last week, Boeing announced it had installed the aerial refueling system on its prototype T1 MQ-25A at the company’s test site at the MidAmerica Airport in Illinois near St. Louis, Mo.

“When we resume flight testing later this year, we’ll have the opportunity to gather test points about the aerodynamics of that pod and the software commands that control it – all happening well before we deliver the Navy’s first MQ-25 jet with the same pod,” Dave Bujold, the company’s MQ-25 program director said in a statement.
“That early testing and early software development is a big part of supporting the Navy’s goal to get MQ-25 to the fleet as quickly as possible.”

Geurts said the Navy and Boeing were taking advantage of the flying prototype as the engineering design and manufacturing work for the early production MQ-25As was beginning.

“That is a tremendous asset that the team has… Getting it back up in the air with refueling pod and doing more flight testing earlier, I think is a great benefit to the program,” he told USNI News.
“It’s a good example of the team taking advantage of an opportunity to take this kind of early bird get it in flight, learn lessons, figure out different facets of the program.”

A Navy official told USNI News that “aircraft components are already moving through the supply chain, the engine is being assembled and landing gear drop testing is complete.”

The Navy had hoped to field the aircraft on carriers by 2024, but backed off an estimated fielding date last year.

In parallel, the Navy is also installing the control systems on the carriers needed to operate the aircraft.

The Navy will upgrade four aircraft carriers with the Unmanned Carrier Aviation Mission Control System (UMCS). Bush will be the first carrier to receive the UMCS upgrade and is currently in a maintenance availability at Norfolk Naval Shipyard, Va.