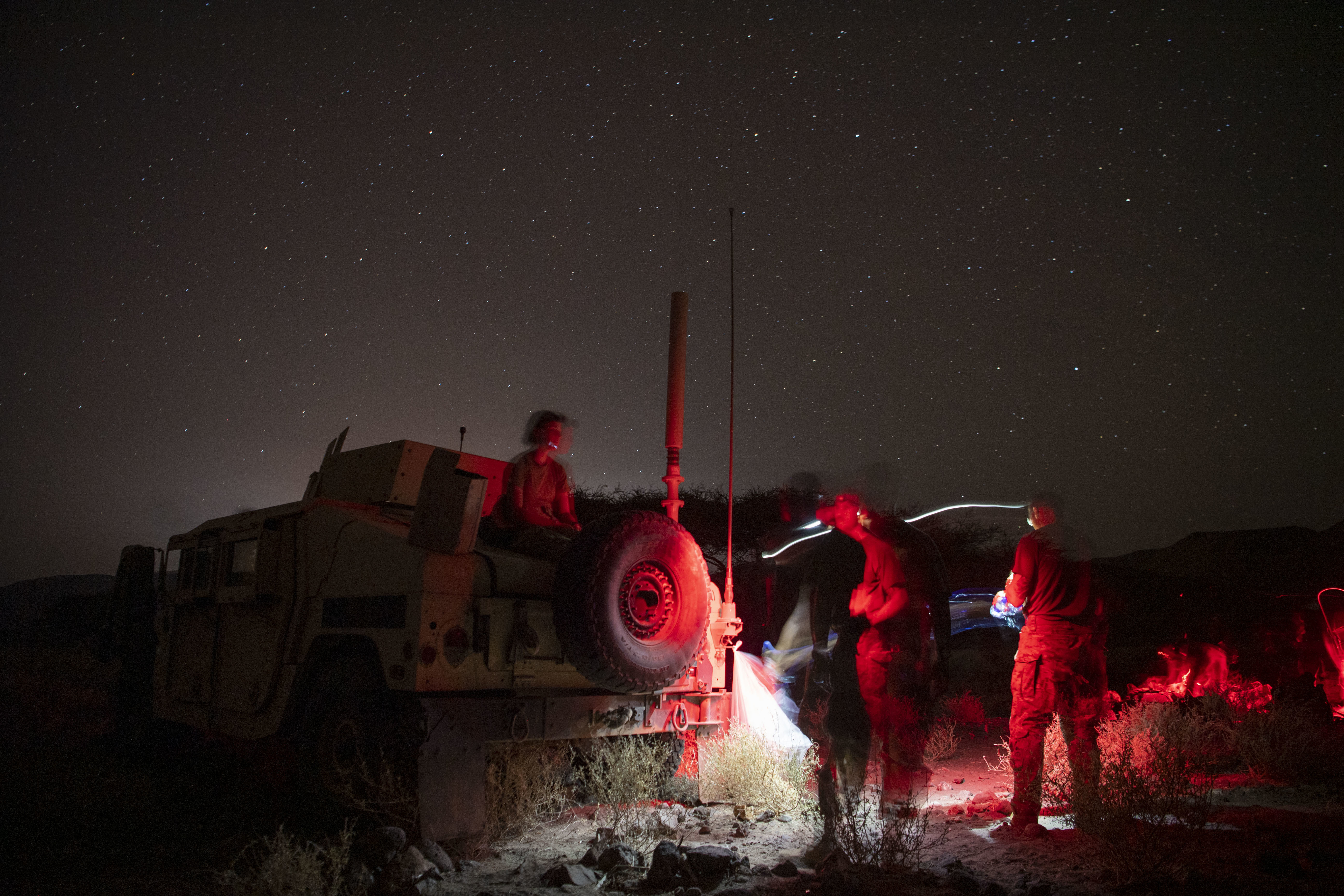 U.S. Army Soldiers from Combined Joint Task Force-Horn of Africa participate in a night navigation exercise during the French Desert Commando Course on Nov. 6, 2020, at an undisclosed location in Djibouti. US Air Force Photo

The French Army will test key parts of its new strategic vision, which emphasizes readiness for high-intensity conflict, in a major exercise this April with key allies, the United States and United Kingdom.

In an Association of the United States Army online event Tuesday, Maj. Gen. Michel Delion, director of France’s Center for Doctrine and Command, said, “it’s much better to have a single view” of what’s effective. He added that exercise, known as Warfighter 21-4, is a means to gauge integration of effects among French, British and American divisions.

“Military force is coming back to settle conflicts” and it is being accompanied by “un-proclaimed ways of war,” like disinformation, cyber disruptions and more “to achieve fait accompli,” he said. The new technologies he mentioned in future high-intensity conflict included electro-magnetic weapons, cyber and space.

The French and U.S. strategy changes reflect other domains besides ground, land, and sea. Each nation has a cyber and space command in its armed forces.

In introducing the session, French Army Chief of Staff Gen. Thierry Burkhard, said it was “paramount” that the American and French armies organize to operate together in future high-intensity conflict. Delion said armies have learned to operate together in counterinsurgency and counterterrorism operations in Afghanistan, Iraq and Syria against the Islamic State and in Africa’s Sahel.

As with its U.S. Navy counterparts in exercises and missions, the French Army has begun in recent years more extensive training with American ground forces. The U.S. is readying an American Brigade Combat Team to serve in a French division and the French are preparing to have one of its divisions serve in an American corps.

Delion added that the goal is to have a “battle-hardened” force by 2035 in an army that already has “a lot of combat experience” in the Middle East and Africa. But it is the nature of possible future conflict that, like in the Pentagon, caused the French Armed Forces to revise its strategic vision.

“Some clouds are darkening the sky. This uncertainty is not a surprise,” he said. When asked a question about Russia, Delion said the strategy did not identify particular nations, but examined potential future threats. In talking about capabilities in great power conflict, he said “we won’t fight the war we want, but the one we face.”

Using the term “butterfly effect,” he said “small changes can lead to big results” in caring for soldiers, providing them with new weaponry, better training opportunities in technical schools for noncommissioned officers and looking for efficiencies in organization from battalions up.

Brig. Gen. Todd Wasmund, the first American general officer to serve in a senior position in the French Army, added: “most of the challenges we run into [in compatibility and integration come] from policies.”

Serving as the deputy commander of operations in the 3rd French Division, he used the example of digital connectivity for fires. The capability to synchronize exists but policy blocks the sharing of information even with close allies, like the French. He also acknowledged a shortfall Delion mentioned that has surfaced during the COVID-19 pandemic over digitizing its logistics system to better understand what’s available and how to make it more resilient when stressed.

During the April exercise, the French 3rd Division will operate as part of the American III Corps.

In welcoming Wasmund to the division, its commander, Maj. Gen. Laurent Michon said, “the U.S. and French armies must train hard today, before engaging in an operation side-by-side and achieving victory tomorrow. …I entrust him fully with the responsibility of the operational preparedness of the division.” Details like digitizing logistics and sharing firing data is key to the integration of forces over time.

Delion said France is already applying lessons learned about equipment compatibility and integration of forces with neighboring Belgium and Germany. What comes out of April’s exercise will lead future discussions with Germany, the U.S. Army’s Future Command and the U.S. Marine Corps over capabilities of maneuver forces.

Delion and Wasmund also saw the exchange of officers between the armies as rising. In January, when Wasmund moved to the Marseilles-based division, Brig. Gen. Hubert Cottereau had already been assigned as deputy commanding general for readiness of the U.S. 3rd Infantry Division at Fort Stewart, Ga.

The exchange of officers “is not new,” Delion said, citing the early alliance between America and France and Supreme Allied Commander Ferdinand Foch’s operations with U.S. Army and Marines in World War I.

“The human approach is probably the most important” in better integrating the forces. The best place to start is the major level, Delion said, and soon he hopes to have American Army officers attending advanced French military schools at that level and the lieutenant colonel ranks.

As to whether France can sustain this strategic vision, which includes its ability to operate autonomously, Delion was optimistic. After years of budget cuts, France’s national security budget has been “growing year after year,” he said. The expected continued growth “will allow us to prepare with lots of training” for the changes and modernized equipment for the armored force, Delion said.