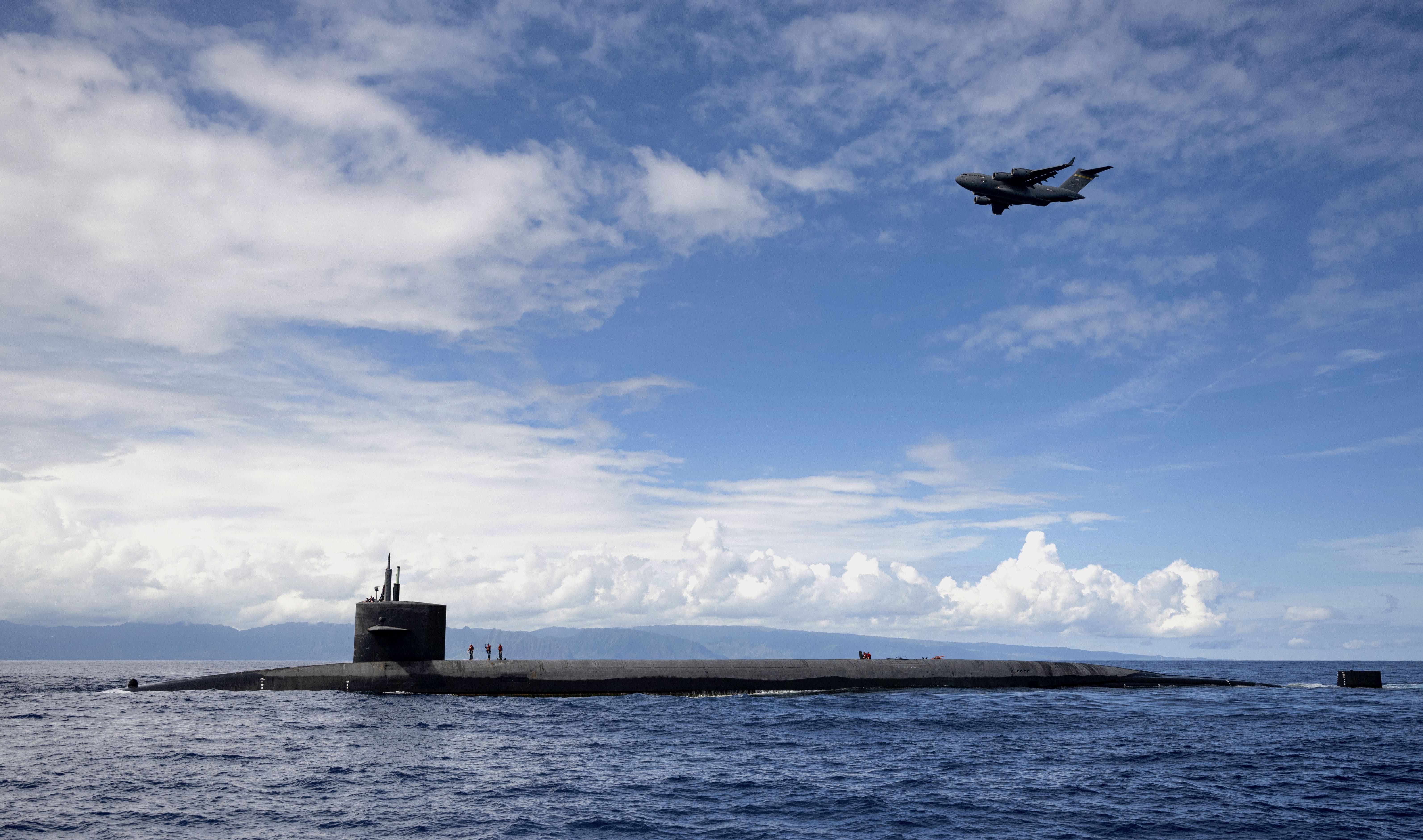 The Navy in recent weeks has demonstrated an ability to resupply its ballistic missile submarines at sea using a range of manned and unmanned aircraft, testing their ability to keep the boomers on their stealthy nuclear deterrent patrols without coming to a port.

Though the SSBNs are nuclear-powered and don’t have to stop and refuel, other things could keep them from their mission: a sick sailor could need medicine not stocked onboard, food could run low, parts could break.

From Oct. 19 to Oct. 23, USS Henry M. Jackson (SSBN-730) tested out aerial resupply concepts in and around the Hawaiian Islands with at least four aircraft: an unmanned aerial vehicle piloted remotely by a sailor, a Marine Corps MV-22B Osprey, an Air Force C-17 Globemaster III and a Navy MH-60R Sea Hawk.

“That was specifically with our strategic forces, and the purpose of that was to exercise our ability to maintain our ballistic missile submarines at sea and fully ready,” Commander of Submarine Force Pacific Rear Adm. Blake Converse said this week at the Naval Submarine League’s annual symposium.
“Whether it be a small part delivered by a UAV, if it maintains the submarine fully operational because it fixes their atmospheric control system or weapons system; or whether it be a resupply of food or other logistics or medical capabilities that they need to continue on their mission – we exercised those things to demonstrate the ability to keep our submarines at sea.”

Videos released from the test events show the drone dropping a small red package onto the top of the surfaced SSBN, where some crew members were waiting to retrieve it. The Air Force C-17 dropped a larger package into the water nearby using a small parachute. And the Navy MH-60 delivered a crate inside a net, similar to how the helos conduct vertical replenishments from supply ships to surface ships underway.

“This event was designed to test and evaluate the tactics, techniques, and procedures of U.S. Strategic Command’s expeditionary logistics and enhance the overall readiness of our strategic forces,” reads a video caption.

Converse said SUBPAC had also done similar experiments with attack submarines and guided-missile submarines. Though those boats, too, need to remain stealthy, they do make some limited port visits during deployments for maintenance, for crew rest, for repairs and more. They can also pull up to a submarine tender at sea when needed. The SSBNs, however, are supposed to spend their deployments lurking underwater in a designated area, remaining as hidden as possible and minimizing any disruptions to that mission. Coming out of hiding to go to port and get a spare part or a medication they didn’t have onboard could put the sub and its mission at risk. However, being able to obtain a package a C-17 dropped into the ocean, for example, would attract much less attention.

“We don’t need to send them fuel, but sometimes we do need to send them [food], sometimes we do need to get them some parts to keep them at sea,” Converse said during his Sub League speech.
“Our submarines are very reliable and can carry quite a bit of food, but this further extends the range of those submarines. And that was hugely mission-enhancing for the BN force.”