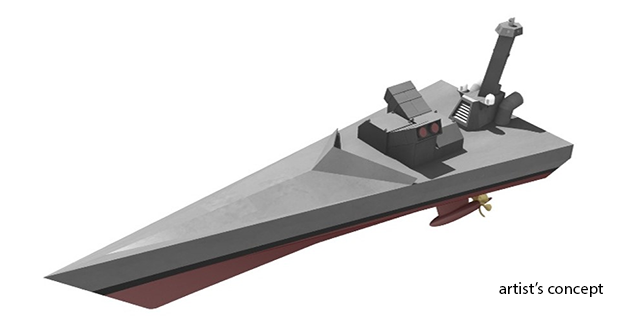 As the Defense Advanced Research Projects Agency (DARPA) explores designs for a ship that could operate without humans aboard, the agency is keeping the Navy involved in the effort to ensure it progresses forward should the program’s work succeed.

While the Navy is creating unmanned surface vehicles based off designs meant for ships that could bring humans aboard, the No Manning Required Ship (NOMARS) program is the first to pursue a design that takes humans out of the calculation.

Gregory Avicola, the NOMARS program manager, told USNI News in a recent interview that DARPA has had conversations with Navy offices like PMS-406, the service’s program executive office for unmanned and small combatants, and the Surface Development Squadron, which has been tasked with developing the concept of operations for unmanned surface vehicles, since the agency started the NOMARS initiative.

“If we do have a really successful program, how do we transition it? The answer is — so far — what we’ve been doing is have closely linked coordination with the Navy offices that care about this sort of stuff. So PMS-406, in particular, we’ve been bringing along for all of our technical discussions. And when we get to phase two, we expect to partner up with them in terms of making sure that the [request for proposals] we put out has things that are crucial in there . . . if we’re going to go do demonstrations with them, things like that,” Avicola said.

“We’ve been talking to SURFDEVRON, which would be — that’s the Surface Development Squadron — which would be in charge of testing and experimentation with the ship once DARPA’s done with it, presumably,” he continued. “So making sure that they’re part of the process… from the very beginning so that they know what we’re doing, and they have the ability to give us their thoughts and help guide the program, to a certain extent.”

PMS-406 is overseeing Navy programs like the Large Unmanned Surface Vehicle and MUSV, while SURFDEVRON One currently has a Sea Hunter prototype that originated as a DARPA program. SURFDEVRON One is slated to receive a second Sea Hunter this fiscal year, as it continues experimentation.

A prototype for the Ghost Fleet program based on a manned commercial ship. US Navy Photo

Earlier this month, DARPA announced it had issued a series of awards for the first phase of NOMARS, with two separate tracks for seven different companies.

Track A is starting from scratch to pursue a new ship design and track B focuses more on individual technologies that could be employed on NOMARS or manned ships, Avicola said.

Avicola described the program as an experiment in putting aside some of the traditional elements of designing ships because NOMARS won’t be developed around the needs of people aboard. The companies exploring potential designs do not need to account for passageways for people to move through, maintenance areas crew members could access, and the potential for seasickness, he noted.

“All of those aspects go into ship designs. And so there are well-known naval architecture rules of thumb and design principles that naval architects use to design ships,” Avicola said.
“We’re basically saying, start from a clean sheet of paper and examine all of those design choices, with this other question in mind — how do you make the ship reliable without any human movements and how do you design the ship so it’s maximally efficient if you don’t have to worry about all that stuff I just told you about.”

Avicola described the track B awards, which went to five different companies, as having a “narrower” focus than the pursuit of a wholly new ship design in track A.

“If a performer — let’s say had a novel engine technology for the sake of argument — that they thought might make a difference, they could have proposed that to a Track B proposal, which is not the entire trade space.” Avicola said, providing a hypothetical example.

“But we could fund that research with the idea that it would either affect ships in general, and therefore be useful to the Navy, or specifically, could enable the NOMARS future ship designs by exploring that technology and bringing it to a level where one of the Track A performers could incorporate that into their design, if they thought there was merit to do so,” he continued. “That’s really the difference between track A and track B.”

The goal for NOMARS is two-fold. In addition to seeking a ship design created without considerations for humans onboard, DARPA is also exploring how it can maintain an unmanned ship that performs lengthy transits and does not need humans to perform the sustainment work while on the vessel.

DARPA’s work comes as the Navy aggressively seeks unmanned vehicle technology and pursues multiple USV programs as it experiments with a new fleet architecture. Defense Secretary Mark Esper recently called for the Navy to build toward a fleet of more than 500 ships that would include a mix of both manned and unmanned vessels.

In describing the portion of NOMARS devoted to the maintenance of unmanned vessels, Avicola compared the ships to aviation platforms. While unmanned and manned aircraft typically require a similar maintenance structure – where a ground crew provides sustainment in between sorties – Avicola said unmanned ships “break the paradigm” because while manned vessels are maintained by the crew aboard, the NOMARS concept removes the crew from the equation.

“So now we take a ship that goes out to sea for some period of time –say months — comes back to port, and now a ground crew swarms over it, so it’s more like the airplane model, right? So how do you design the ship, so that it can be accessible to that maintenance paradigm where you maintain it from the outside in between sorties? Our sorties are months, not hours or days, but it’s still the same idea,” Avicola said. “And let’s say you had 50 ships that you want to maintain at any given period of time, how do you make it so that it’s almost like an assembly line process, so that it’s amicable to scaling?”

“So you bring the ship into a depot – you know this is completely notional, right — this is something that the performers are going to go explore. But imagine — as an idea — that you bring the ship to the pier, you lift the ship out of water because they’re not very big ships,” he continued. “You’ve seen boat hoists lift fishing boats out of the water — same kind of thing – maybe I lift it out of the water, put it on a pad, and then somehow I take it apart, do whatever I need to do, put it back together, put it back in the water.”

Should companies succeed in the trade study work, Avicola said the program would ideally lead to a second and third phase in which DARPA would seek proposals and ultimately a prototype of a vessel that meets the design requirements the companies explored in the first phase.

“If we can fundamentally redesign how unmanned ships are designed compared to — if we can unlearn all the lessons we’ve learned for manned ships that are no longer applicable for unmanned ships, we very well might have enabled that vision of larger fleets of cost-effective unmanned ships that the Navy keeps describing, and I think that’s a very exciting goal,” Avicola said.