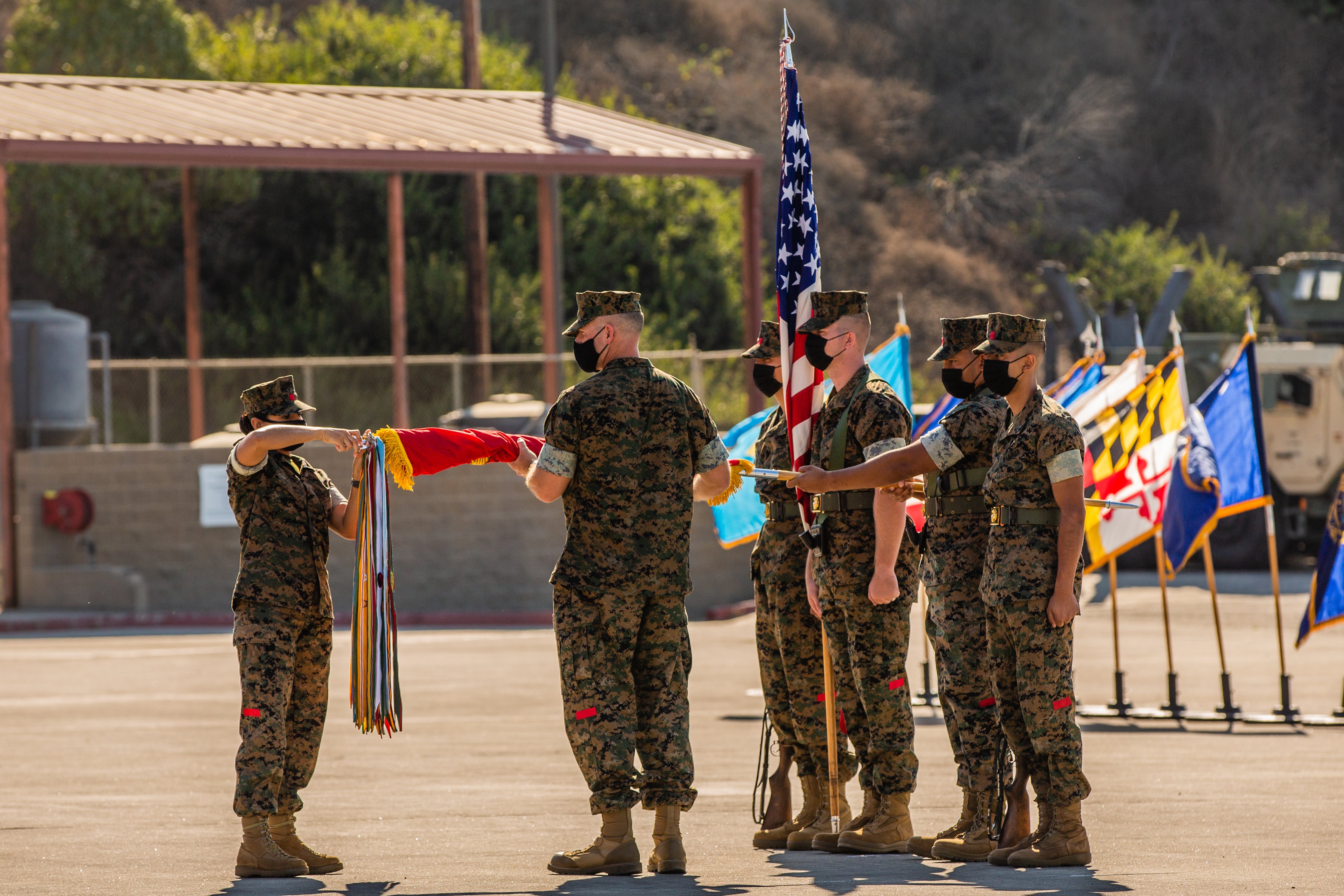 ”The flexible options that LSB will provide to a commander are specifically designed to support distributed maritime operations and expeditionary advanced base operations,” Stehle said during the reactivation ceremony. “LSB will be well-postured to provide that full spectrum of landing support capabilities from ports, airfields and across beaches across the globe in support of our national interests.”

The battalion is one of three active-duty LSBs the Marine Corps is reactivating to support Fleet Marine Forces. On Oct. 16, the East Coast-based II Marine Expeditionary Force and 2nd MLG officials at Camp Lejeune, N.C., marked the reestablishment of 2nd Landing Support Battalion, previously deactivated in 1979. The Marine Corps is reviving 3rd Landing Support Battalion to support III Marine Expeditionary Force in Hawaii and across the Western Pacific.

The driving factor for LSB’s return to support active-duty Fleet Marine Forces, however, isn’t the Marine Corps’ ongoing Force Design 2030 that’s transforming military jobs, changing force structure and divesting some capabilities and units, such as the service’s M1 tank battalions, that aren’t envisioned to be needed in the future force.

Rather, the return of LSBs stems from Marine Corps Force 2025 plan that was developed in 2016 to determine how the service would best be structured and organized for threats in a future high-tech operating environment across the range of military operations. “These unit activations are not part of the current CMC-directed Force Design efforts,” Marine Corps spokesman Maj. Joshua Benson said Thursday in response to questions about the reactivated units.

The reactivations took effect Oct. 1 “to achieve the capabilities outlined in the MC Force 2025 analysis,” Benson said. “The activation of these battalions improves distribution of supplies, equipment and personnel throughout the battlespace via ports, airfields and across beaches in support of MEF operations.”

The Force Design effort is ongoing, he said, and Lt. Gen. Eric Smith, the deputy commandant for combat development and integration, is working with the deputy commandant for installations and logistics, Lt. Gen. Charles Chiarotti, “on analysis to determine the appropriate force structure and organization to sustain the future force. This analysis is evaluating all (logistics combat element) units.”

“The capabilities within the LSBs remain important to the future force; however, how that capability is employed may adjust,” Benson added. “Multiple options are being explored to allow our leadership to make informed decisions on how sustainment activities, enabled by innovative technologies and processes, can become more effective and efficient.”

A Long Lineage and Legacy 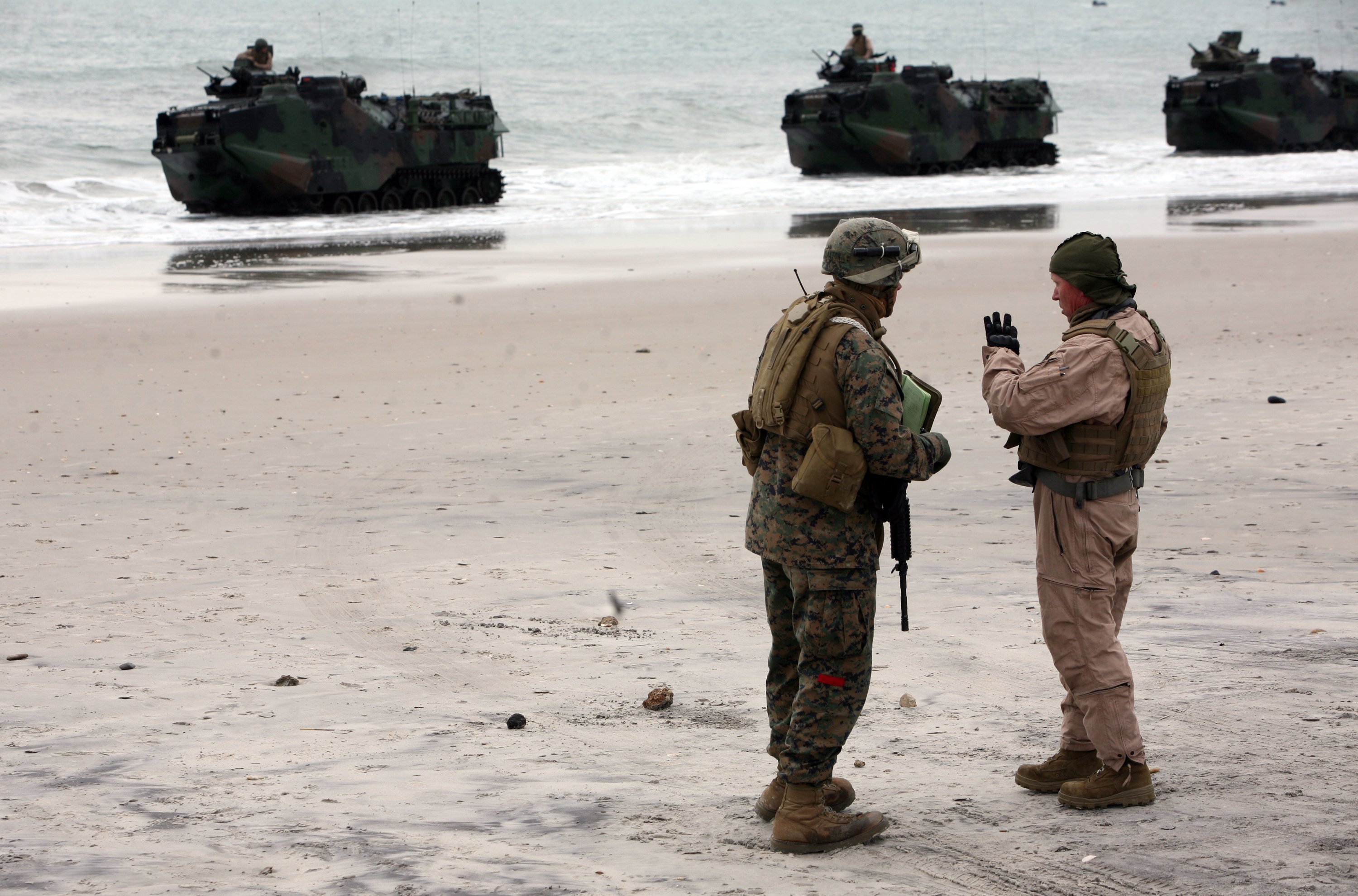 Most Marines know LSBs as the “Red Patch” for the red fabric squares affixed to members’ camouflage trouser legs and service covers. The small patch denotes those Marines tasked with providing support on the beach. It dates back to World War II and Guadalcanal, where confusion reigned during that amphibious landing over which Marines on the beach were providing landing support.

“It was a designation of authority as to who was supposed to remain on the beach to help ensure the throughput of combat power and sustainment ashore while the rest of the forces were flowing ashore,” Stehle told the Camp Pendleton audience, which included several former and retired “Red Patch” battalion commanders.

The Marine Corps has varied its landing support capabilities at various levels and by unit designations and deactivations, including in its reserve force. Often, regardless of unit name, “Red Patchers” were referred to as the “shore party” doing work similar to what today’s Navy beachmaster units do to support amphibious operations at landing beaches and surf zones. For example, 2nd LSB activated on Nov. 17, 1941, at Camp Elliott, Calif., as Shore Party Detachment, 2nd Marine Division, and in Feb. 1942, was re-designated as 2nd Pioneer Battalion and supported the island campaigns across the Pacific. It later saw several redesignations and, in 1979, was deactivated.

Meanwhile, 1st LSB grew from 1st Pioneer Battalion, which activated on Feb. 7, 1942, and deployed throughout WWII’s Pacific campaigns while undergoing several redesignations. On Oct. 1, 1949, it became 1st Shore Party Battalion, 1st Marine Division, and saw action during the the Korean War and later in Vietnam. It deployed as 1st Landing Support Battalion during Operations Desert Shield and Desert Storm, Operation Provide Comfort in northern Iraq, and Operation Restore Hope in Somalia in 1992. The Marine Corps deactivated the battalion in 1998. 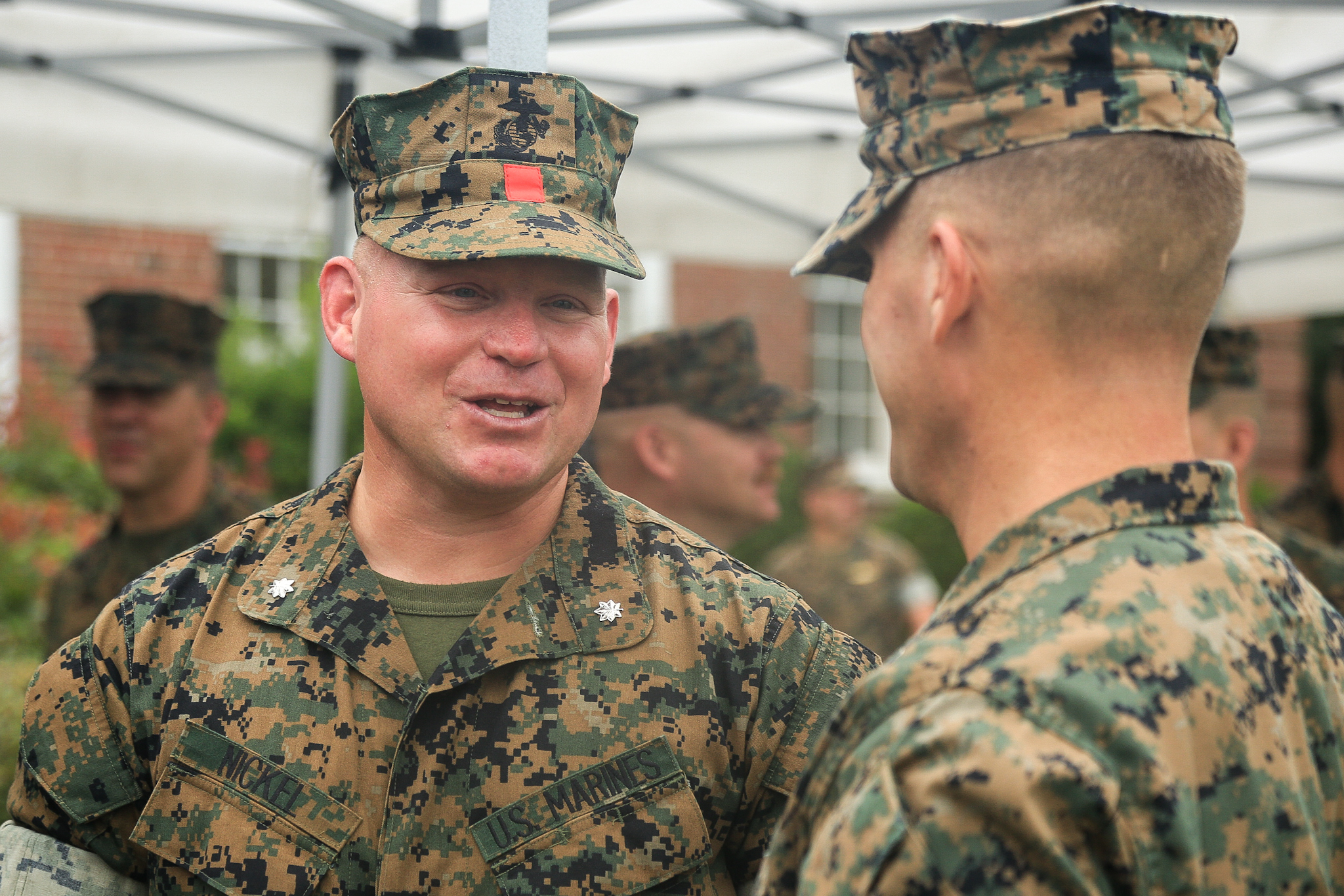 Under current plans, 1st LSB will have about 600 personnel, while both 2nd LSB and 3rd will have approximately 400 personnel each, Benson said. The West Coast-based unit “is larger based on the size of the organizations they are tasked to support.”

For 2nd LSB, its reestablishment “comes during a time of significant transformation within the Marine Corps. Small landing support elements will be vitally important to enable throughput and sustainment of distributed forces,” the battalion commander, Lt. Col. Randall Nickel, said at the Oct. 16 ceremony at Camp Lejeune, according to a 2nd MLG news release. “Whether this is accomplished in the littorals via amphibious ships or via aerial delivery, landing support to the Fleet Marine Force is essential to ensure mission accomplishment.”

At Camp Pendleton, Lt. Col. Jonathan Peterson, 1st LSB’s commander, uncased the colors for 1st LSB, whose ribbons and streamers displayed the long lineage of combat missions. “It feels good wearing the patch again,” said Peterson, a former member of 4th LSB, where he was the Bravo Company inspector-instructor at Lathrop, Calif. “It’s been a few years since I had it, and I never thought I would wear it again.”

The reactivation’s timing, coming amid another Marine Corps transformation of its forces, gives LSB Marines a chance to influence its future role, Peterson said. “Marines checking onboard, they’re inquisitive. They’re curious. They’re asking questions. What does it look like? And I look forward to being a part of that,” he said, “and really bringing back that legacy of 1st Landing Support Battalion.”

“We are in line with Force Design as we move forward,” he added.

The battalion is reoccupying space it previously had near the base’s Del Mar boat basin and forming its Headquarters and Support Company over the next few months. It will prepare to receive two companies – Beach and Terminal Operations and Landing Support Equipment – transferring over from 1st Transportation Support Battalion, Peterson said. The battalion will form two line companies – Alpha and Bravo – into next year “and then our hard work is going towards (exercise) Freedom Banner next year, where we want to get after the experimentation.”

Officials see benefits to reconstituting disparate capabilities into a single battalion focused on manning, training and equipping the unit to conduct the mission. “It’s aligned underneath one commander,” providing a better alignment of capabilities, including arrival-and-assembly of forces and more efficient training of the unit, Peterson said before the ceremony. Landing support previously was a company-level capability led by a captain.

Unit Marines are skilled in landing support, communications, motor transport, aerial delivery, equipment operations, heavy equipment engineering and maintenance. The largest company is BTO, with several hundred members. As Marines and sailors check into the new units, “we’ll be receiving equipment over the course of the next year,” he said.

“Employment-wise, we are really going to be a force provider,” Peterson said. Those could include detachments to special-purpose Marine air-ground task forces and to exercises and service-level training events, and possibly on ships, “depending upon detachment requirements.” Seagoing Marine expeditionary unit’s combat logistics battalions retain their landing support capability, however.

Whether for a crisis or a conflict, “that’s really what we’re going to get after: how to support the larger picture within the distributed maritime operation,” Peterson said. He expects the battalion will work with their Navy counterparts, including beachmaster units as the commandant refocuses everyone on the “Fleet Marine Force” and better naval integration. 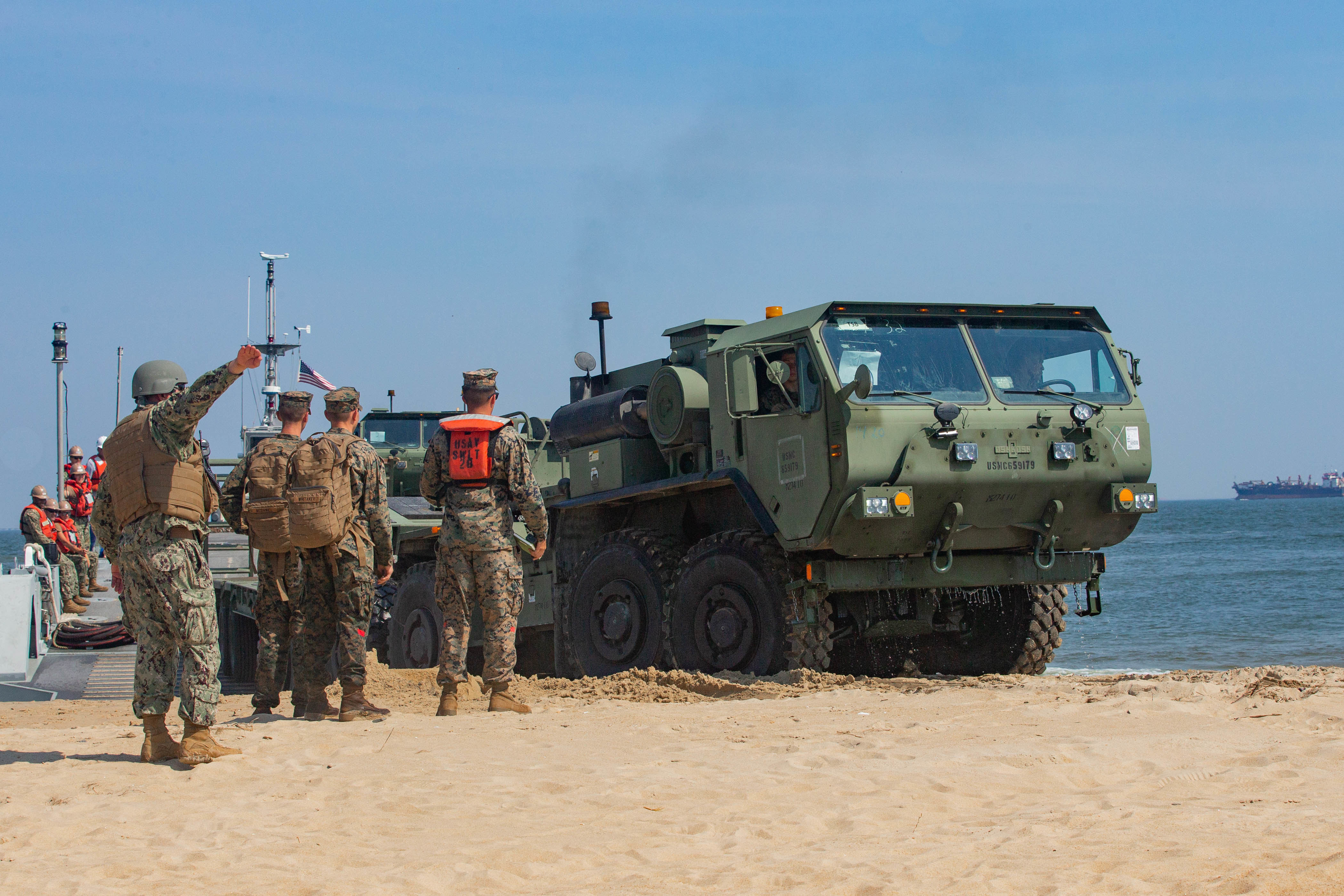 Landing support Marines work with all sorts of units, from loading ships and trains and rigging cargo for airborne movement to driving heavy equipment and controlling airfields. They often are skilled in multiple specialties, which is handy when working in small units in expeditionary locales.

“Red Patchers can do everything. They have a tendency to improvise, adapt and overcome and fix things that people think is impossible,” said Franklin Reid, a retired gunnery sergeant who started as a diesel mechanic and later became a parachute rigger, a shore party specialist and a logistics chief.

Reid was a member of 1st LSB deployed aboard dock landing ship USS Rushmore (LSD-47) with the 15th Marine Expeditionary Unit’s landing support detachment in late 1992 for Restore Hope, the international humanitarian mission in Somalia amid inter-clan fighting and civil unrest. The unit was tasked to assist the landing of U.S. forces onto the beach of Mogadishu, the capital city along the Indian Ocean.

But berms along the beach didn’t make for an easy amphibious landing, and the MEU deployed with no bulldozers to clear routes across the beaches. So the detachment of 30 Marines had to find local vehicles, most in poor working condition.

One dozer they got their hands on “needed gasoline, it needed oil, it needed a radiator cap,” Reid said. “Once we figured out what was wrong with it, I radioed back to the ship and they sent me what they needed for the mechanic to get it running. Once they got it running, they started knocking the berm down, and finally the amtracs start coming across the beach.”