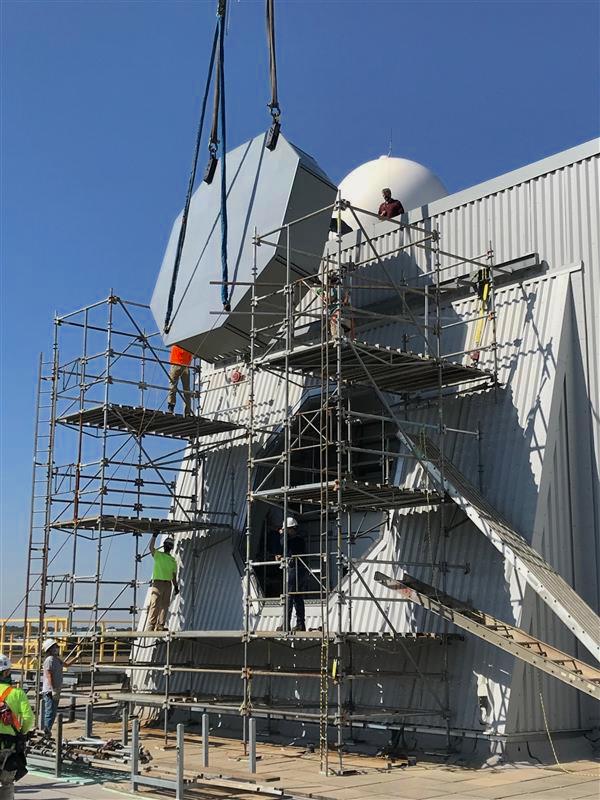 The Navy’s ground-based testing site for the Aegis combat systems on Wednesday took delivery of its new air and missile defense radar array that will go on the next iteration of guided-missile destroyers, the service announced.

The AN/SPY-6(V)1 radar arrived in Moorestown, N.J., for testing at the service’s Combat Systems Engineering Development Site, the Navy said in a news release. CSEDS, also known as the “cruiser in a cornfield,” has been the ground-based testing site for the AEGIS Combat System since 1977.

“As AEGIS [techincal representative] does with other elements, testing SPY-6 on land in a controlled environment will enable them to identify and correct issues before they are deployed to the fleet,” the service continued.

The new radar will replace Lockheed Martin’s AN/SPY-1D(v), which is outfitted on the Arleigh Burke-class guided-missile destroyers.

The Navy will field the new SPY-6 radar, built by Raytheon, on the Flight III Arleigh Burke-class destroyers. In 2024, the Navy plans to outfit SPY-6 on the first Flight III destroyer, the future USS Jack H. Lucas (DDG-125), under construction at Ingalls Shipbuilding in Pascagoula, Miss.

Scott Spence, Raytheon’s director for radars, said this week’s delivery completes the SPY-6 system for the Navy’s testing facility in Moorestown. Raytheon previously delivered back-end elements, including power and cooling components, to the testing facility. While this is the only system that will go to Moorestown, Spence said other arrays would go straight to the fleet.

SPY-6 is built with modular arrays so the radar can be scalable for different Navy platforms. The version for the Flight III destroyers includes 4 arrays, with 37 RMAS per array, according to Raytheon’s website.

“Watching the lift and installation of the SPY-6 radar was really exciting for our team on the ground – it capped off many years of work by the program,” Mike Mills, Raytheon’s program director for SPY-6, said in a statement. “The installation will enable further testing and integration with Aegis Baseline 10 for the Flight III destroyers and add critical capability to defend against current and future threats.”

USNI News previously reported that the Navy is assessing the potential to backfit the SPY-6 system onto the Flight IIA Arleigh Burke-class destroyers.