Capt. David Gray, the military detachment officer in charge of the Military Sealift Command expeditionary sea base USNS Hershel ‘Woody’ Williams (ESB 4), gives guidance and direction to Sailors while leading a training evolution aboard one of the ship’s ridged-hull inflatable boats while the ship was at anchor in the Chesapeake Bay, Sept. 15, 2019. Hershel ‘Woody’ Williams is conducting mine countermeasures equipment testing. US Navy photo.

It’s growing more likely that components of the mine countermeasures mission package designed for the Littoral Combat Ship small combatant will end up also fielded on the Navy’s massive Lewis B. Puller-class expeditionary sea bases, the director of expeditionary warfare (OPNAV N95) said this week.

“They’re probably going to be deployed on the Littoral Combat Ships, given her magnificent mission bay – we’ll start there, and then we’ll have some on the ESBs,” Maj. Gen. Tracy King said this week while speaking at the Surface Navy Association’s Virtual Waterfront conference.
“I’m really fond of putting them on the ESBs because of how survivable she it. She is an extremely survivable platform, which, if you’re running around looking for mines, that’s probably what you want to be on. So I like that piece of it.”

A key feature of the MCM mission package is unmanned vessels to transport sensors into potential minefields: the Northrop Grumman MQ-8 Fire Scout unmanned aerial vehicle would carry the airborne MCM systems, while an MCM Unmanned Surface Vessel made by Textron would be able to haul various minesweeping and hunting payloads, and the General Dynamics Knifefish unmanned underwater vessel has organic mine hunting and identification sensors.

USS Hershel “Woody” Williams (ESB-4) has already conducted interoperability testing with the in-water components of the mission package, to ensure that its large and open mission deck – equipped with cranes to move small craft in and out of the water – can support moving the Knifefish and the MCM USV in and out of the water.

The ESBs were originally designed with two missions in mind: airborne MCM and special operations forces support, both of which envision the ESB serving as a lilypad to support helicopter operations at sea. Though the future of MCM operations has moved away from helicopters pulling sleds in the water and increasingly will rely on unmanned systems in the water and the air, King suggested the ESB will still play a big role in MCM operations going forward.

His comments come as the Navy decommissioned three of its 11 legacy Avenger-class MCM ships. The three U.S.-based wooden hulls – USS Champion (MCM-4), USS Scout (MCM-8) and USS Ardent (MCM-12) – were formally decommissioned Aug. 25, 26 and 27, respectively, according to a Navy webpage, after waterfront ceremonies the week before. 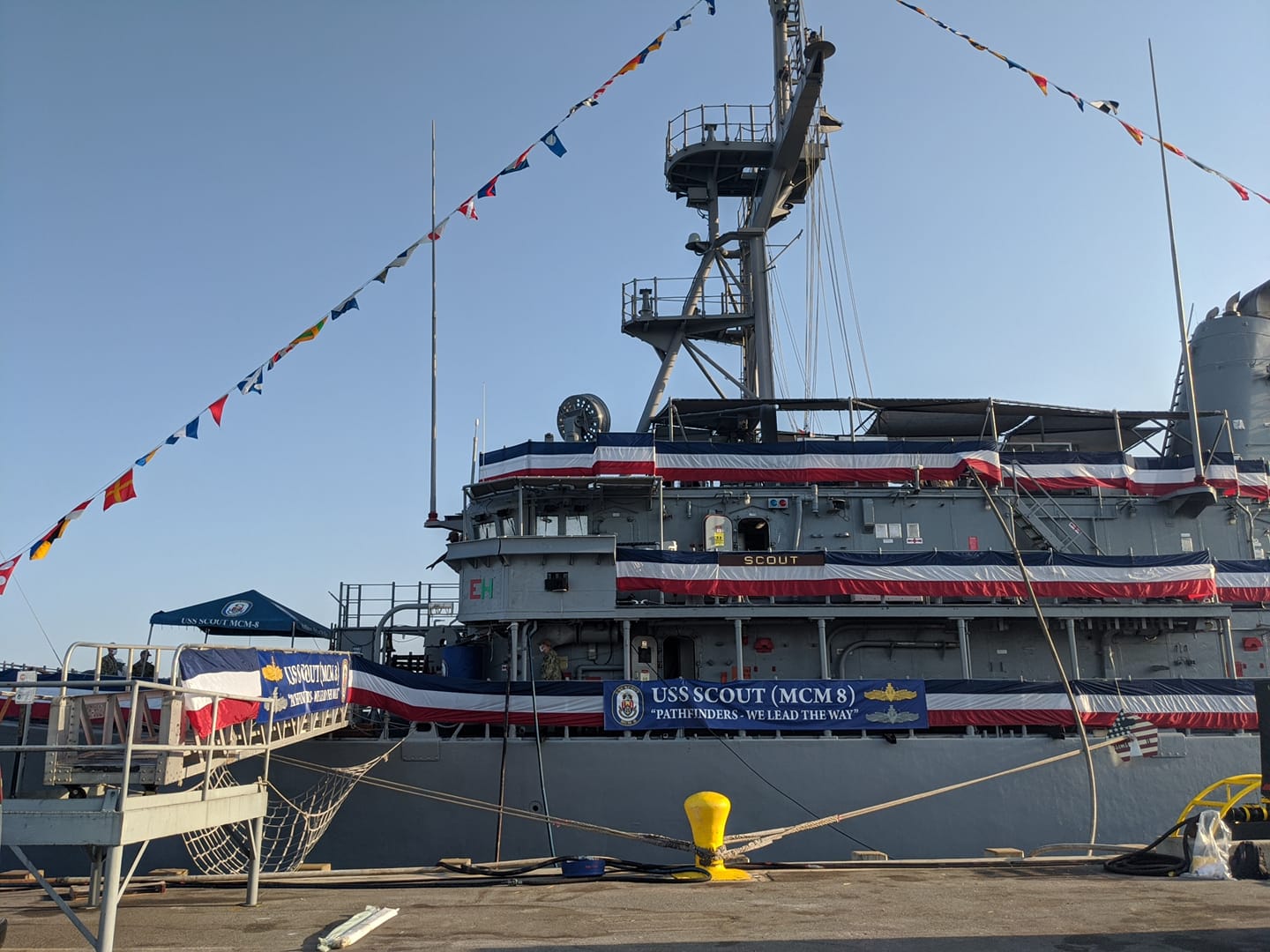 USS Scout prepares for an Aug. 19 decommissioning ceremony for the San Diego-based MCM ship, which ended its service after 30 years in the Navy. USS Scout photo via Facebook.

“If I had to lay my entire portfolio out in front of you and kind of list it in the areas that I’m most concerned, our ability to conduct counter-mine operations on a large scale is probably right at the top. I’m concerned about it, King said during his Aug. 27 speech.
“We have a legacy fleet of 11 mine sweepers. … We’re decomming three as we speak, so all the CONUS-based ones, we’re going to use them for parts. We’re leaving the [forward-deployed] ones out there,” he said, with four each remaining in Bahrain and in Sasebo, Japan.

“I visited the ones at Sasebo. It’s just magnificent to get on with the sailors and see what they can do with that dipping sonar and that very, very old ship. The problem that we have in our capabilities today is you’ve got to be in the minefield to remove the mines, and that’s what we’re trying to change,” he said.
“We want to be able to see them from standoff – and this is the same problem we have on the land, it’s so similar to all my experiences going up into Iraq and Afghanistan, it’s the same thing. Finding the minefield is the most important thing – the ability to get through it, if the joint force commander decides to, that’s secondary – but detecting the leading edge of a minefield at sea or a minefield ashore, that’s really, really hard. And how do we normally do it? We do it with an explosion. We’re really trying to get after the ability to do wide-scan, wide-area, deep, finding minefields.”

The MCM mission package’s pieces are meant to work in coordination with each other, with each specializing in finding and neutralizing mines in various parts of the water column. The Airborne Laser Mine Detection System and the Airborne Mine Neutralization System cover deeper waters, while the Coastal Battlefield Reconnaissance and Analysis (COBRA) works in the beach zone, USNI News has previously reported. A Knifefish unmanned underwater vehicle finds and identifies mines in a cluttered seafloor environment, while a Textron-made Common Unmanned Surface Vehicle is being leveraged to both pull an unmanned influence sweep system (UISS) as well as the towed AN/AQS-20C minehunting sonar.

In addition to the counter-mine systems, King also acknowledged the need to invest “just enough” in offensive mining capability. He described it as a tool the Navy and Marines would want to use from a standoff range, which is what the Navy is investing in now, to complicate the adversary’s decision-making process.

“You only need one mine to make a minefield. And I’ve been in a minefield, it’s frickin’ scary,” he said.
“Mine warfare actually attacks your tempo, not the forces, and slowing down an adversary is exactly what the United States will need so we can uncoil the rest of the Navy.”