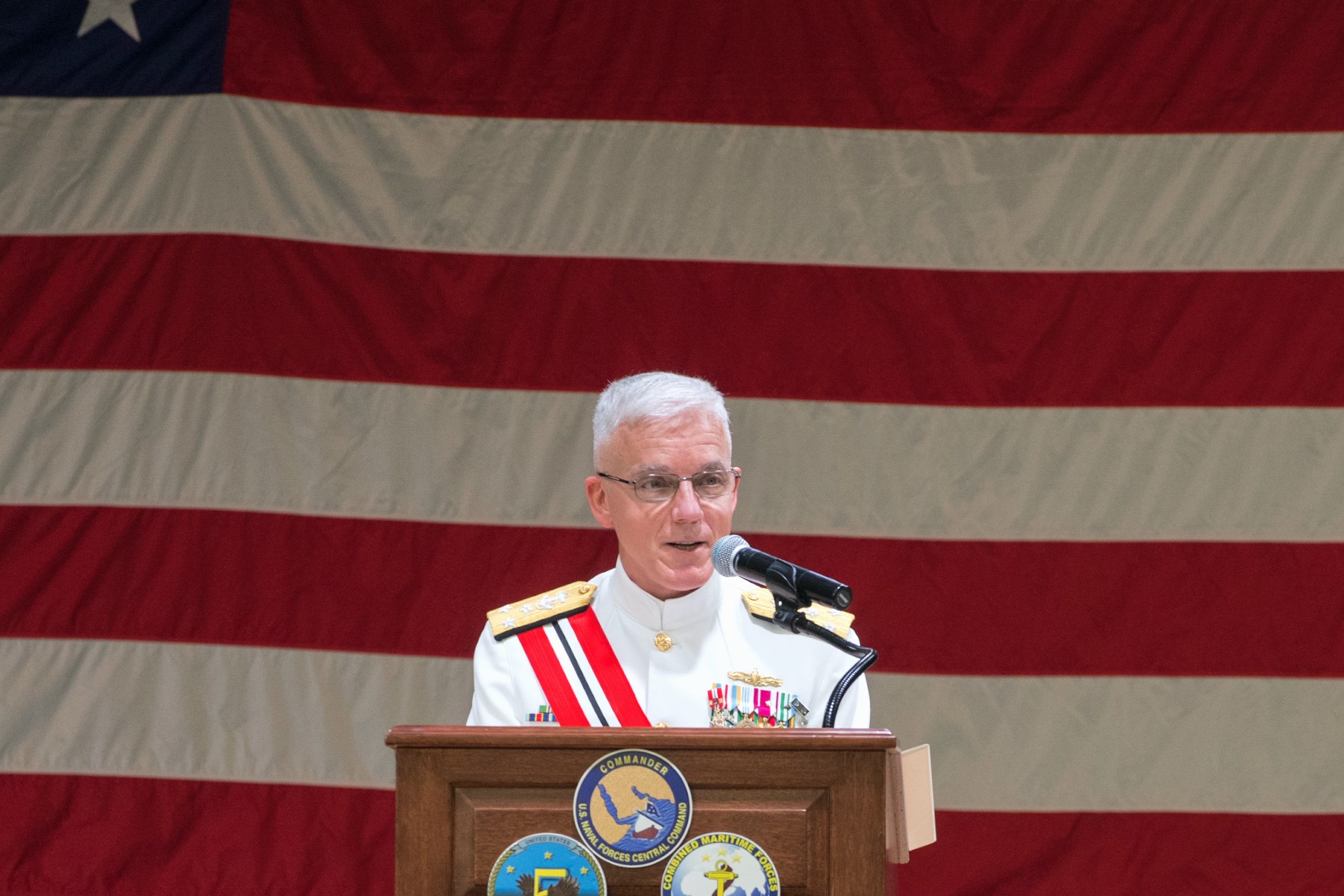 A new commander has taken charge of U.S. naval forces in the Middle East as tensions with Iran continue to simmer.

“The strategic environment continues to be marked by complexity with determined adversaries and competitors. The mission demands teamwork that the coalition and joint force has fostered,” Paparo said.

Paparo, formerly the director of operations for U.S. Central Command, will lead the U.S. naval force in the Middle East after more than a year of heightened pressure on Iran.

For naval forces, that has resulted in a carrier strike group on station outside the Persian Gulf since May 2019, as well as the creation of the International Maritime Security Construct (IMSC) and Task Force Sentinel, an international coalition to protect merchant shipping from Iranian harassment, overseen by 5th Fleet.

“Under his command, the 5th Fleet demonstrated an exceptional ability to respond to operational threats and re-established [itself] as a true ‘fighting fleet,’ prepared for major combat operations on short notice…and while I certainly hope we don’t have to, I am completely confident in the posture and resilience of our naval forces, and our ability to generate combat power whenever and wherever it is needed,” CENTCOM Commander Gen. Kenneth McKenzie said in a message broadcast during the ceremony.

Malloy took command of 5th Fleet in December 2018 after the death of former commander Vice Adm. Scott Stearney. Malloy’s nomination and confirmation was quickly moved through the Senate.

In June, the Pentagon announced Malloy would take over as CENTCOM’s deputy commander.

In summing up his time at 5th Fleet, Malloy said, “the key to all our successes have been common interests, commitment to rule of law, collaborative endeavors, and professionalism – a great contrast to those who coerce, intimidate, obfuscate and who would drag this region into conflict for their own ends.”

Paparo graduated from Villanova University and commissioned in 1987. He is a career fighter pilot, flying F-14 Tomcats, F/A-18 Hornets and F-15C Eagles as an exchange officer with the Air Force. At sea, he commanded Strike Fighter Squadron (VFA) 195 in Yokosuka, Japan, and Carrier Air Wing 7, embarked in the Dwight D. Eisenhower Strike Group. He also commanded Provincial Reconstruction Team Nuristan Province in Afghanistan with the 3rd Brigade, 10th Mountain Division and the 173rd Airborne Brigade; served as battle director at the Combined Air and Space Operations Center in Al Udeid, Qatar; and served as the Director of Operations (J3) at CENTCOM.

Malloy has previously served as the deputy director of operations of CENTOM (J3); commander of Carrier Strike Group 10, deploying with USS Dwight D. Eisenhower (CVN-69) in 2016 to CENTCOM in support of Operation Inherent Resolve; and, most recently, vice director for operations on the Joint Staff (J3). He is a 1986 U.S. Naval Academy graduate.