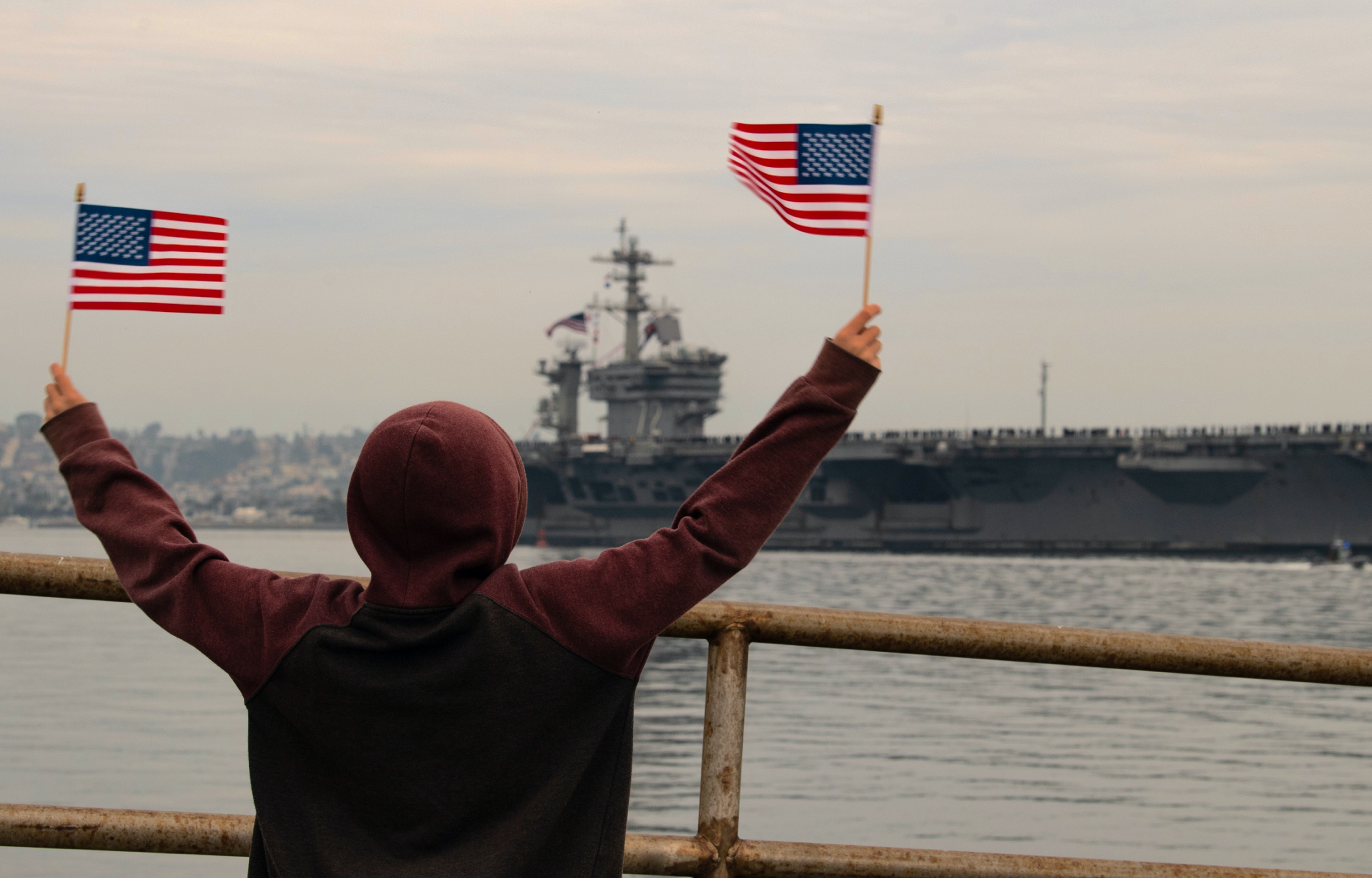 The Navy’s problems over the last several years have done little to change the average American’s view of the service, according to an internal Navy survey reviewed last week by USNI News.

In the summary data, confirmed by Navy officials, the general opinion of the service has remained steady over the last decade despite a string of high-profile accidents and controversies in recent years.

Since 2009, the Navy has maintained a 76- to 82-percent approval rating with the American public that has been largely unaffected by episodes like the fatal collisions in the Western Pacific in 2017, the ongoing fallout in the service from the federal corruption case against Leonard Francis, a string of incidents in the last several years involving members of the Naval Special Warfare community, and the COVID-19 outbreak aboard carrier USS Theodore Roosevelt (CVN-71).

“We here in the Pentagon and D.C., we can very easily get myopically focused on what people in the Beltway are saying and what people in … the op-ed pages are saying,” Chief of Naval Information Rear Adm. Charlie Brown told USNI News in an interview last week.
“It is interesting when we see that the confidence levels in the Navy’s capabilities remain high in the American public. That’s positive and we’re happy about that.”

The survey was conducted in June, ahead of the pier-side fire on amphibious warship USS Bonhomme Richard (LHD-6)

Additionally, the inside-the-Beltway frustrations of Congress over the Pentagon’s and Navy’s lack of a shipbuilding plan have not affected how the public perceives the service. According to the survey, 70 percent of Americans were unaware the Navy was seeking to build a fleet of 355 ships. 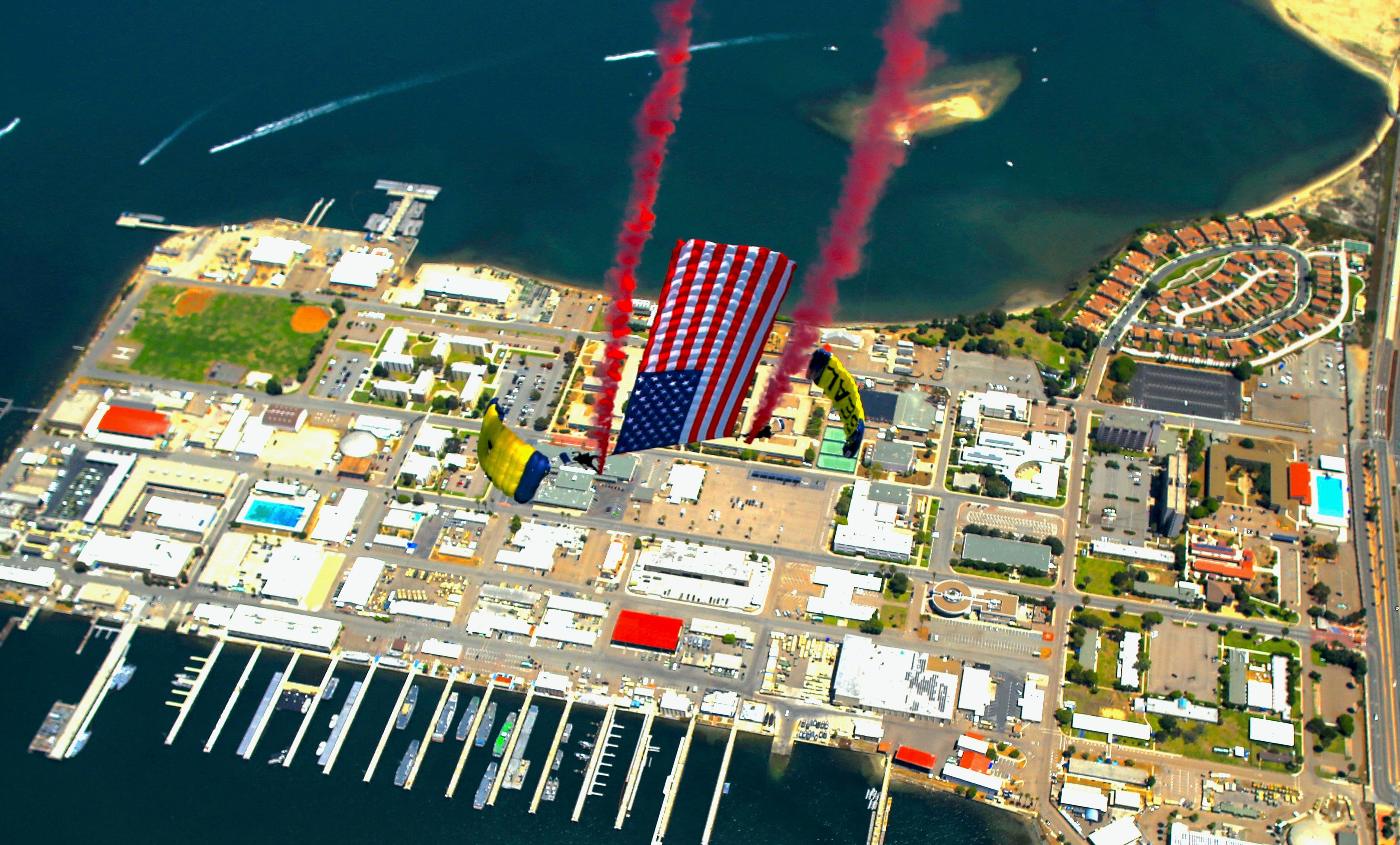 Members of the United States Navy Parachute Team, the Leap Frogs, perform a tethered flag with smoke brackets during a demonstration jump on July 4, 2020. US Navy Photo

“When you start talking about flat budgets, great power competition, [the National Defense Strategy], there’s a pretty significant number of Americans who probably aren’t very well-versed in those kinds of issues,” Brown said.
“One of the earlier surveys we did found that 40 percent of Americans think the Air Force has aircraft carriers. That’s a lot of people that we have work to do in terms of just informing them and educating them about what the role of the Navy is and who we are.”

Robert Newell, director of Navy community outreach, told USNI News that part of the challenge connecting with the public is the limited exposure the average American has with the military.

“The reality is that, you know, for your parents and your grandparents, it was much easier to connect with the military back then, because there was a draft. Everybody had a father, uncle, aunt who had served,” he said.

For Steve Everett, the Navy findings aren’t surprising. For almost 20 years Everett conducted similar polls for the Air Force that compared the service to the Army, Navy and Marines. Like the Navy survey, Everett worked to refine the Air Force’s recruiting message and geographically target where to spread awareness of the service.

He found people’s opinion of the military stays largely the same over time.

“It’s quite static. Most people don’t really know what the differences are among the service branches to any level of detail. When I used to do my research, I’d sit down with a civilian focus group and I’d say, write down the first word that comes to mind when I say each of these service branches. It’s predictable, I’d say ‘Army’, and they’d say soldier or tank or green, I’d say ‘Navy’, they say ships. I say “Air Force,’ they say planes,” he said. 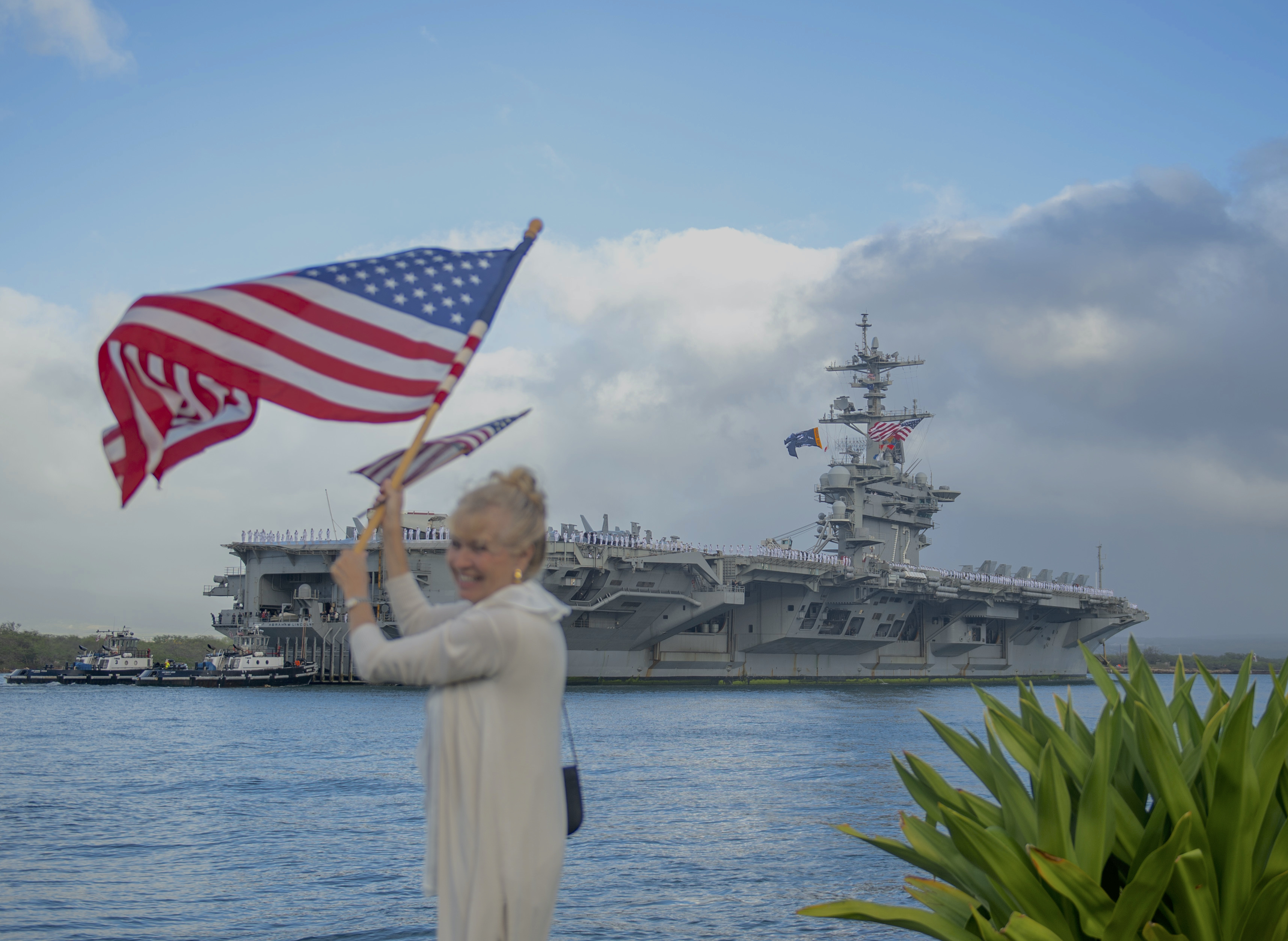 USS Abraham Lincoln (CVN-72) arrives at Joint Base Pearl Harbor-Hickam as part of an around-the-world deployment that includes a homeport shift to San Diego, Calif. US Navy Photo

The exception is the Marines.

“The interesting one was when I would say Marines then invariably, they would say something like powerful or distinguished or respected; they’d come up with an abstract descriptor instead of a thing,” he said.
“My Air Force colleagues tried to crack that nut for 10 years. How can we get the public to think we’re warriors the way they think the Marines are now? The answer was you may never get there. It’s a completely different mission — and 200 years of communication.”

Like the Navy, the Air Force’s approval rating was largely unaffected by the accidental 2007 flight of a B-52 bomber carrying nuclear weapons from Minot Air Force Base, N.D., to Barksdale Air Force Base, La. The fallout from the incident resulted in the removal of both the Secretary and the Chief of Staff of the Air Force and tarnished the reputation of the service in Washington, D.C. for years.

“Until something really bad happens, like Abu Ghraib, that really busts through everybody’s filters and can do a dramatic shift in opinion and sentiment about the military, it’s kind of just coasting along,” Everett said. 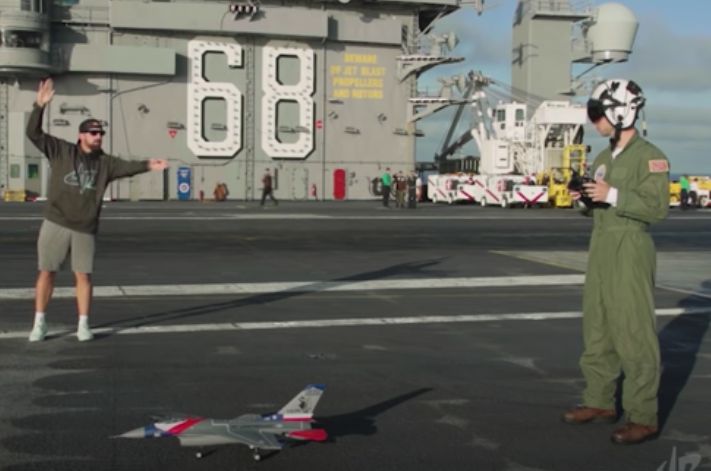 Screenshot of members of the Dude Perfect organization operating a radio-controlled F-16 model off the deck of USS Nimitz (CVN-68).

One of the more recent pushes the Navy has undertaken to raise public awareness is a more active role in social media, not only on the service’s platforms, but also by courting influencers on their own channels.

Brown said the Navy is seeing more and more Americans becoming aware of the service via social media and is adjusting its focus to reach them. For example, the Navy has stopped advertising on television and is instead focusing its efforts exclusively online.

“Having this kind of data is important, so that when we go to Navy leadership and we say, ‘hey, we want to bring reporters from The Wall Street Journal and The New York Times [on a Navy embark] and we also want to bring a YouTube influencer, we need to be able to show why that’s important, why it’s important to reach audiences who don’t already know about the Navy.”

In March, the Navy invited the host of the Smarter Every Day YouTube channel, Destin Sandlin, to the ICEX 2020 exercise in the Arctic. Sandlin, who started the channel while working for the Defense Department as a weapons testing engineer and still consults for the DoD, went underway aboard Los Angeles-class attack submarine USS Toledo (SSN-769) and began posting videos from the trip in late July. Sandlin has been a YouTube staple for the past decade, gathering a following of more than 8.5 million subscribers and posting long-form science explainer videos. In 2016, Sandlin was one of three YouTube personalities chosen to interview President Obama.

He told the Navy when he had previously turned down the service’s offer to participate in a video, “what I would love to do is to learn about how submarines work specifically, I’d love to go on the USS Alabama,” he told USNI News in a Monday interview.

Sandlin flew to the Arctic to film a series of videos with the crew of Toledo to demonstrate specific scientific concepts. Aside from a review of his footage for operational security concerns, the service didn’t direct what he should cover.

“The Navy did not limit my speech in any way… Nothing that says, I’m going to say a certain message. Like I literally got on the boat and they’re like, ‘this is a nuclear submarine. What do you want to know?’,” he told USNI News.
“Because I’ve worked for the DOD for so long, I really care about it being portrayed in an intelligent, respectful way, because I know ultimately, it’s the people, the servicemen and women that make up the military that make it happen. My desire was to be able to get into a situation where I could be in the torpedo room and I can talk to a young enlisted person that’s loading torpedoes without fear, without him being afraid of saying something that he shouldn’t.”

In January, the Texas-based trick basketball shot collective Dude Perfect spent three days aboard carrier USS Nimitz (CVN-68) for a series of stunts on the ship that included flying a remote-controlled airplane off the carrier’s deck. The video representatives from Dude Perfect did not respond to an email from USNI News.

The Navy has also started an Instagram channel, #Atthehelm, to highlight under-represented parts of the service, Brown said. 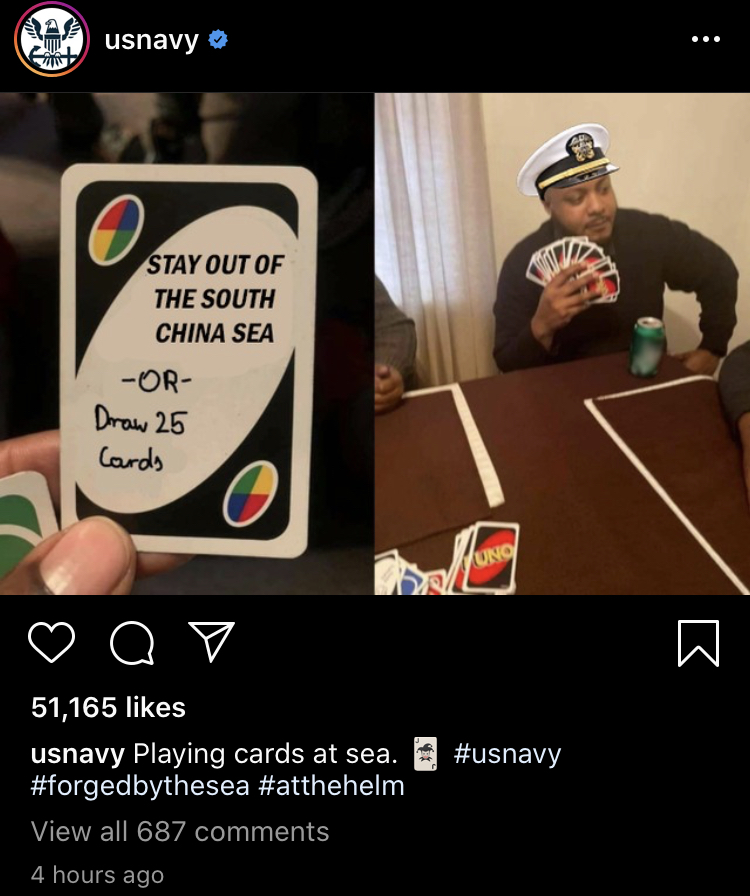 “We’re trying to highlight more Navy sailors. Let them speak in their voice… We try and show women in the Navy, show the diversity and inclusion that we have in the Navy because we want to show, we want to reach audiences who don’t necessarily know about us, he said.

The service’s other pages across all echelons have dabbled in posting humor memes, including a joke about freedom of navigation operations framed as a father and son chat and a popular UNO card game meme.

“This helps us get outside of the more narrowly focused scope and look a little more broadly, because if we’re only trying to inform the people who read Proceedings, then we’re not doing our job,” Brown said.