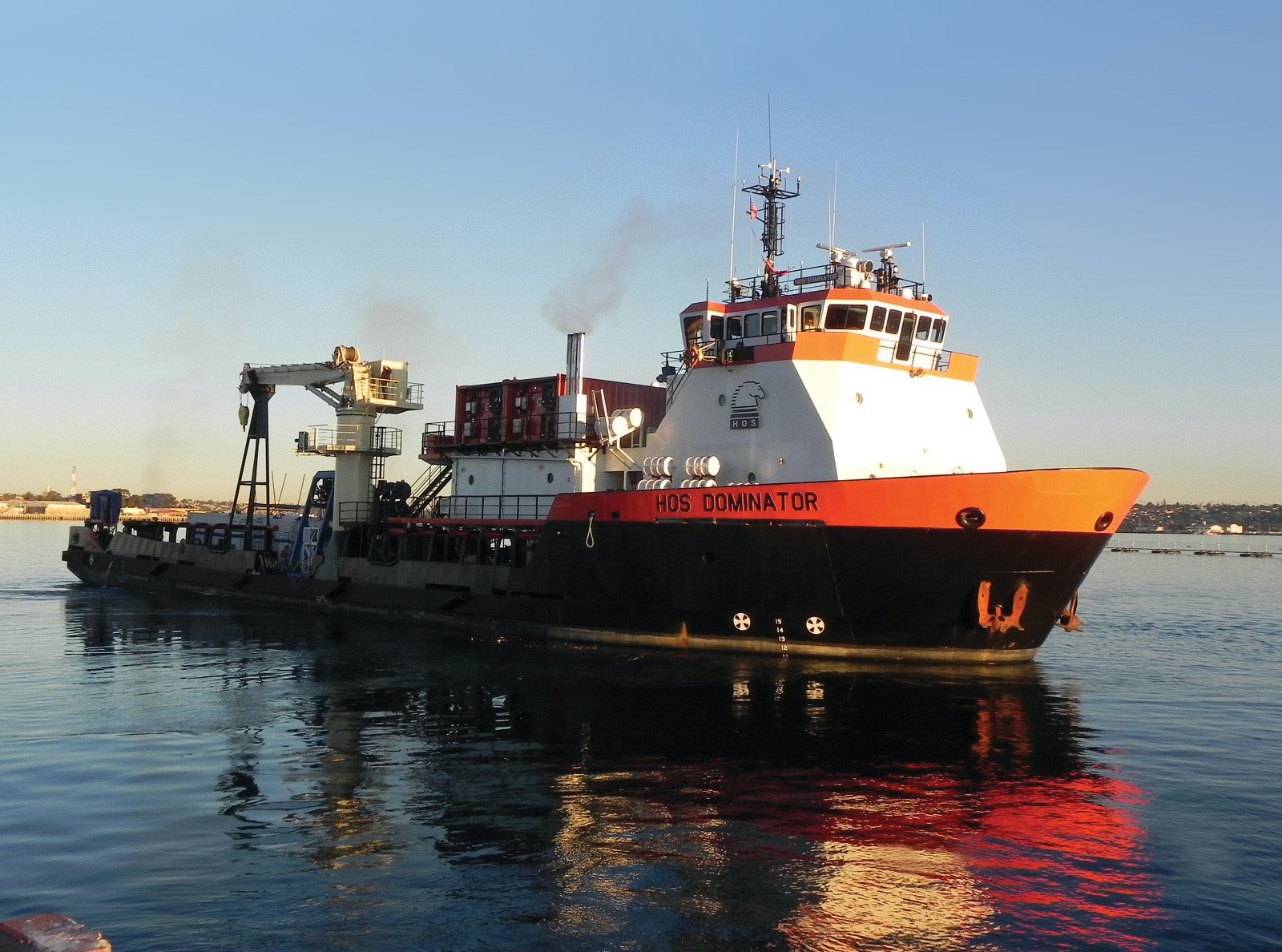 CAMP PENDLETON, Calif. – A Navy ship specializing in undersea search and rescue has joined the mission to find seven Marines and one sailor missing off the coast of Southern California after their amphibious assault vehicle sank on Thursday, USNI News has learned.

“We are continuing search and rescue operations,” Lt. Gen. Joseph D. Osterman, the I Marine Expeditionary Force commander, told reporters at a Friday press conference.
“We have not leaned into recovery operations. We are still looking for the seven Marines and one sailor who we have not yet found.”

Additionally, the Marines have paused AAV operations on the water until the service learns more about what caused the Thursday sinking of the amphibious vehicle, Marine commandant Gen. David Berger said at the same press conference.

The Marines and sailor, assigned to the 15th Marine Expeditionary Unit, had been training on San Clemente Island and were returning to amphibious warship USS Somerset (LPD-25), “when the AAV began to take on water,” Osterman said. 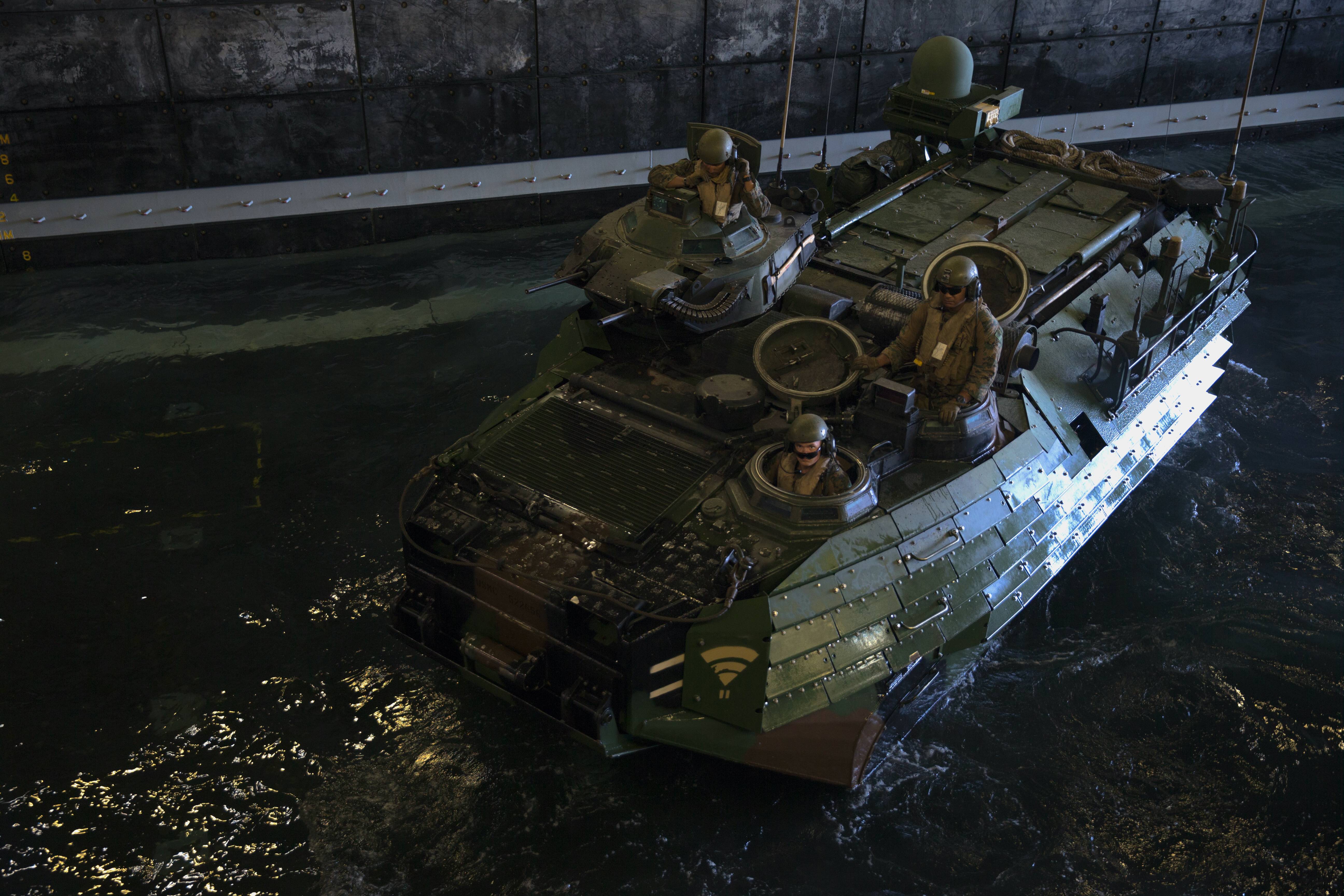 “An immediate response was provided by two additional [AAVs] that were with them…. as well as a safety boat,” Osterman said.

Eight Marines were rescued soon after the AAV started taking on water. One Marine later died from his injuries. As of Friday, two more Marines were in critical condition at Scripps Memorial Hospital in La Jolla, Calif. The other five returned to their unit.

The AAV sank off San Clemente Island’s northwest coast in about 600 feet of water, Col. Brad Bartelt, a I MEF spokesman, told USNI News. The island, 78 miles west of Camp Pendleton, is managed by the Navy. It’s home to live-fire gunnery and bombardment ranges, a naval special warfare training complex, an airfield and several beaches Marines use for amphibious assaults training.

“This mishap is under investigation. We will share the results of it once it is complete,” said Berger, who was visiting Camp Pendleton in part to attend I MEF’s change-of-command ceremony on Friday. Also there was new I MEF commander Lt. Gen. Karsten Heckl and Lt. Gen. Steven Rudder, who commands Marine Forces Pacific.

Heckl took command of I MEF from Osterman shortly after the press briefing in an abbreviated ceremony. 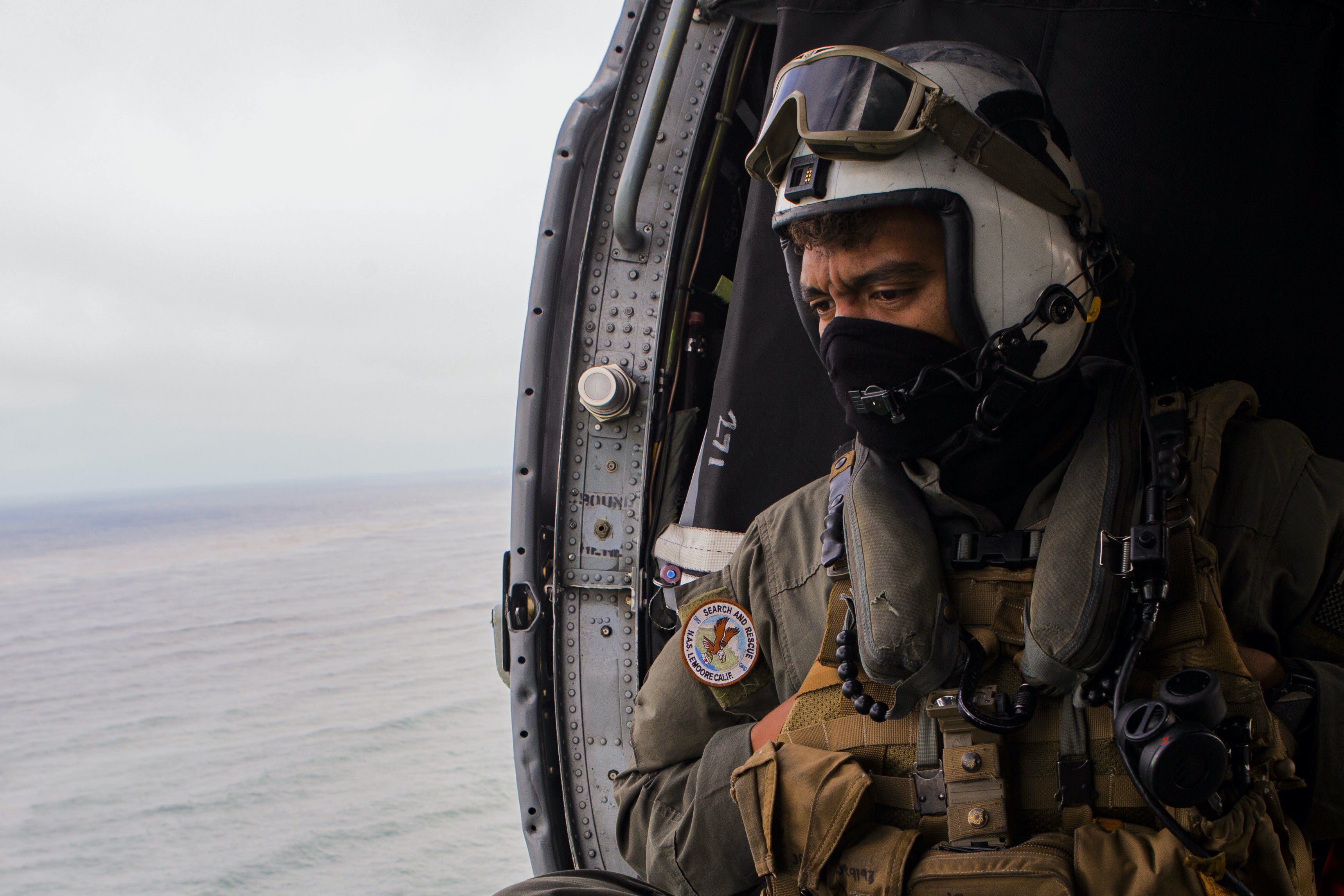 Dominator is a ship contracted for use to San Diego-based Submarine Squadron 11 and the Navy’s Undersea Rescue Command, based at North Island Naval Air Station in Coronado, Calif.

The rescue command’s mission “is to provide submarine rescue capabilities anywhere around the world,” spokeswoman Lt. Danielle Moser said. Among its recent missions was assisting Argentina after it lost contact with its submarine ARA San Juan (S-42) in 2017.

The ship carries highly trained divers and specialized equipment, including remotely-operated vehicles and a pressurized rescue module that can reach depths of 2,000 feet, according to a description from Military Sealift Command.

The sunken AAV “is really below the depth that a diver could do,” Osterman said. “So we are working and we really owe an incredible gratitude and thanks to our Navy and Coast Guard brethren who’ve helped us in this endeavor. They are actually working with us to provide assets that can basically get down and take a look at the AAV.”

“We told them obviously that we would like to be able to see what’s happening and then assess the situation,” he added. “They have a lot of technical knowledge in that realm and basically figure out what the best asset is.” 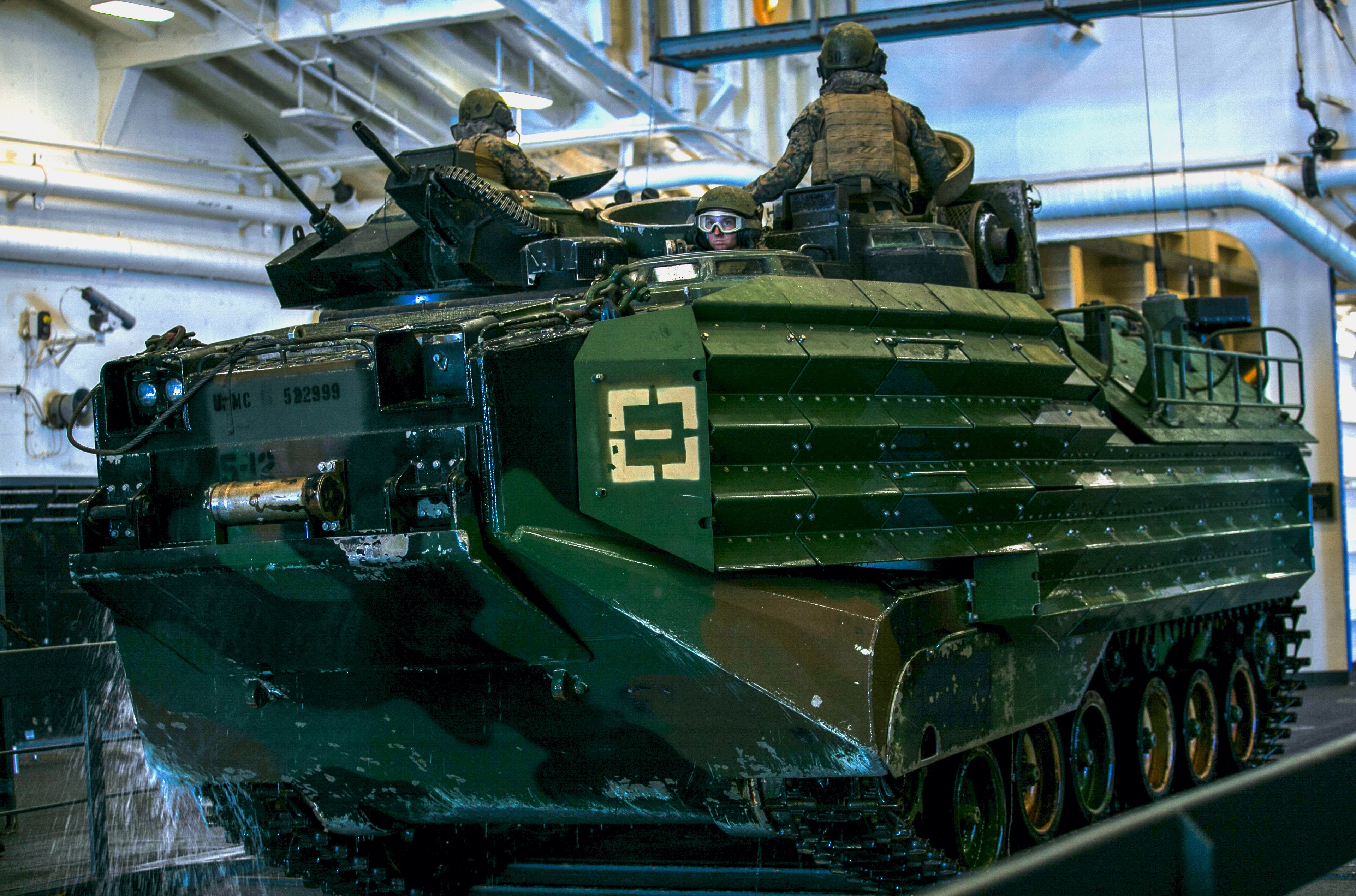 Berger said “all AAVs across the fleet will be inspected” and that out of an abundance of caution, he directed “an immediate suspension of (AAV) water operations until the causal factors of this mishap are better understood.”

“This is to ensure out of an abundance of caution that we take the time, give the time to the recovery and find out what actually happened,” he said. “[AAV] units can continue to train ashore. We’ll wait until we have a better picture.”

“After the investigation is done, we’ll see as always if there are any trends, any linkages,” Berger added. “The first step, conduct the search and rescue and take care of the families, and that’s what the focus is today.” 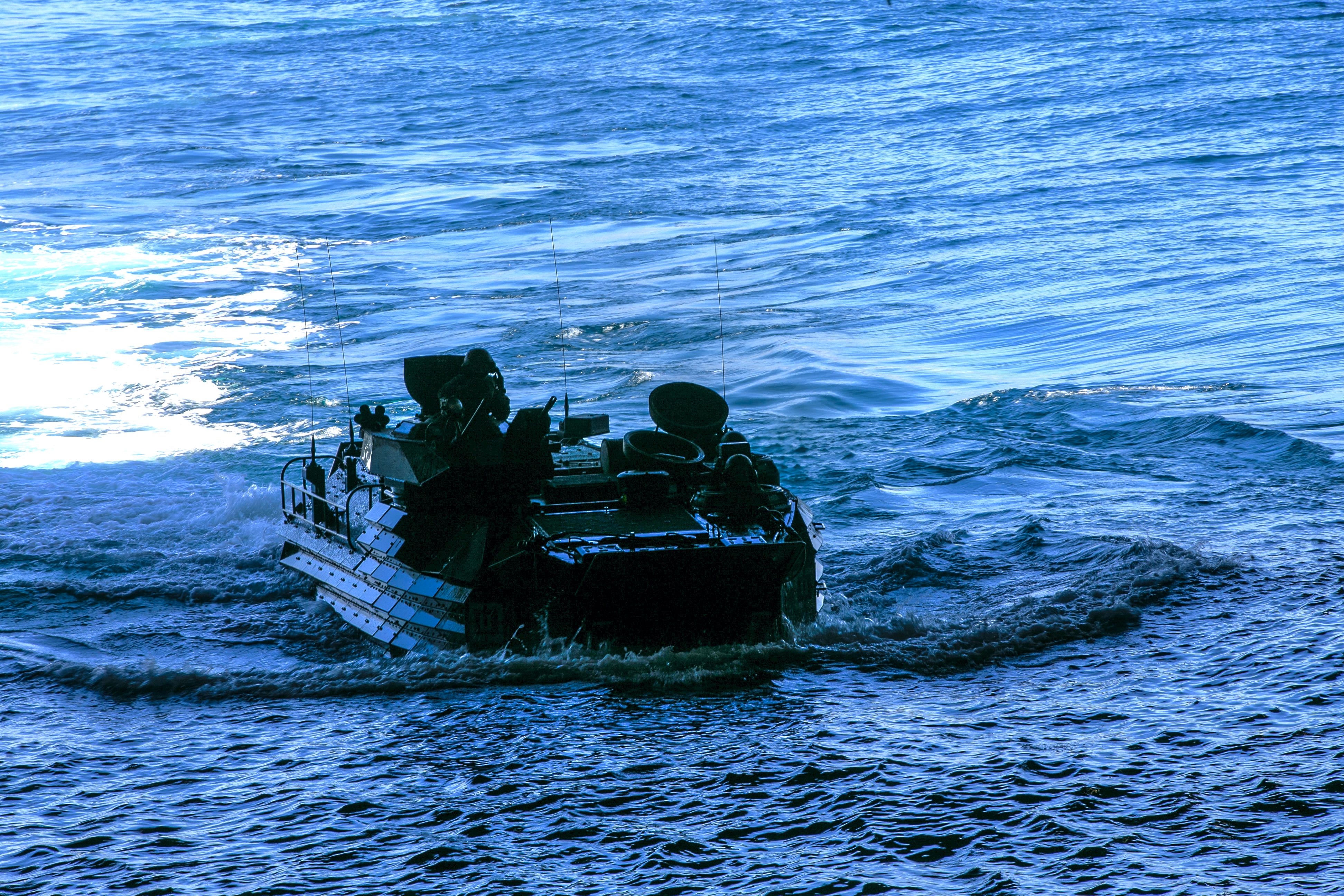 The mishap AAV was one of 13 in the water at the time, officials said.

The Marines were in their normal combat gear that includes body armor they’d use through the previous day’s training ashore, Osterman said. “They all had flotation, as well. That’s part of our equipment loadout,” he said, referring to inflatable vests they’d wear for waterborne missions. Those vests helped in rescuing some of the Marines, he added.

Each AAV holds up to 21 passengers, each with up to 285 pounds of gear, along with an operating crew of three. Getting out of a [AAV] has “an awful lot of dynamics involved in that,” he said.

Each 26-ton AAV has three water-tight hatches, Osterman said, and two large troop hatches in the rear. “It has a natural buoyancy to it, obviously, to be able to conduct amphibious operations,” he said.

Sea state, wave heights, currents, and other sea conditions dictate safe parameters to operate such amphibious vehicles. Officials haven’t said what the conditions were at the time the vehicle sunk. Surface and wave assessments are done before such type of missions.
“The overall conditions were acceptable at the time,” Osterman said.

Marines in the nearby AAVs marked the location where the amtrac sunk, but factors like water currents, temperature and drift would need to be taken into consideration in determining its location.

“The assumption is it went all the way down,” Osterman said.