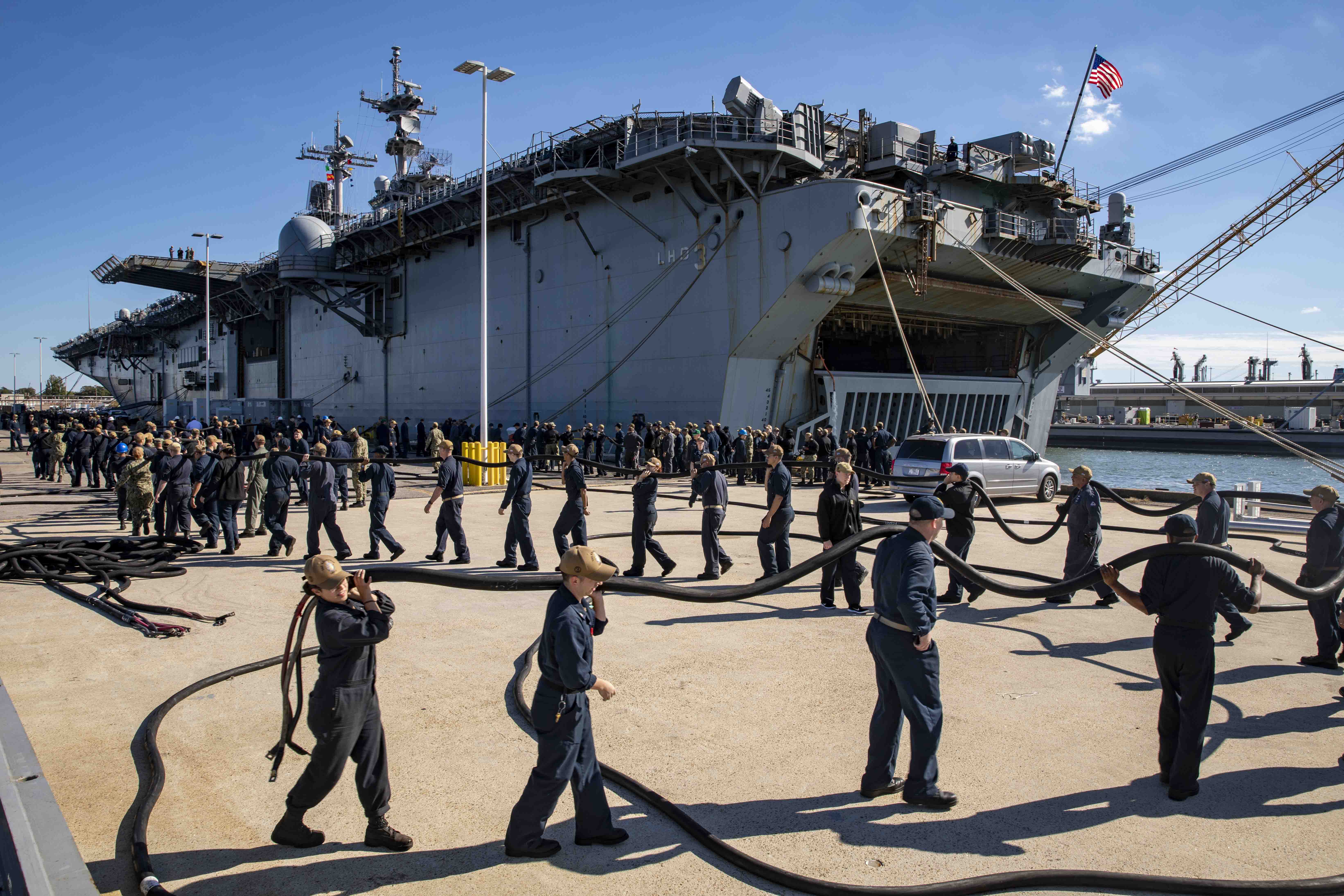 This post has been updated to include additional information from NASSCO.

A Norfolk-based ship repair yard will likely resume maintenance work on Tuesday after a welding incident on Friday led the Navy to order them to stop work.

General Dynamics’ NASSCO-Norfolk in Virginia has paused work on the five surface ships it has at its repair yard and the two carriers it is supporting at Norfolk Naval Shipyard as part of a safety stand-down.

NASSCO spokesman Anthony Paolino told USNI News today, “The event on Friday was metal slag from welding work dropping onto a vacuum cleaner in the space below, which did not result in a fire. Two subcontract companies were welding in the vicinity of the incident. Three fire watches were stationed in the work area. An ember from the welding melted some plastic on the top of a vacuum cleaner that was nearby. There was no fire started, but in an abundance of caution, one fire watch used an extinguisher to ensure a fire did not start.”

Though the incident did not result in a fire, in light of the recent fire that caused extensive damage on fellow Wasp-class amphibious assault ship USS Bonhomme Richard (LHD-6), the Navy ordered NASSCO-Norfolk to stop work.

“On July 17, the Navy was informed of a small fire aboard USS Kearsarge (LHD-3), currently conducting a Selected Restricted Availability at General Dynamics NASSCO – Norfolk. The fire was quickly extinguished by the fire watch and resulted in minimal damage. In response to this incident, the Navy has issued a stop-work order for all ships in maintenance availabilities at GD NASSCO Norfolk to ensure compliance with all established fire protocols and procedures,” Naval Sea Systems Command spokeswoman Colleen O’Rourke told USNI News today.

Paolino said that the Navy completed walk-throughs on the two aircraft carriers it is supporting, USS Harry S. Truman (CVN-75) and USS John C. Stennis (CVN-74), and was cleared to resume work on them this afternoon. NASSCO and the Navy would complete the walk-throughs on the surface ships on Tuesday to fully remove the stand-down orders.

“Today we spent the morning talking to our crews and emphasizing proper hot work procedures, fire zone boundary requirements, incident reporting, and evacuation and muster procedures. These discussions have taken place at all NASSCO repair sites,” he said.
“We have taken all necessary steps and have already completed walkthroughs with the Navy on several ships today. We have been given permission to resume work on those ships and will be conducting walkthroughs on the remaining ships tomorrow.”

Defense News first reported on the fire on Saturday.

Two additional sources told USNI News today that the incident played out exactly as it should have, with the fire watch noticing the stray spark and addressing it before a problem evolved. Fire watches are required to be on station when welding and other hot work is taking place during maintenance. The two sources said there was no flame and that the situation could hardly be described as a fire. 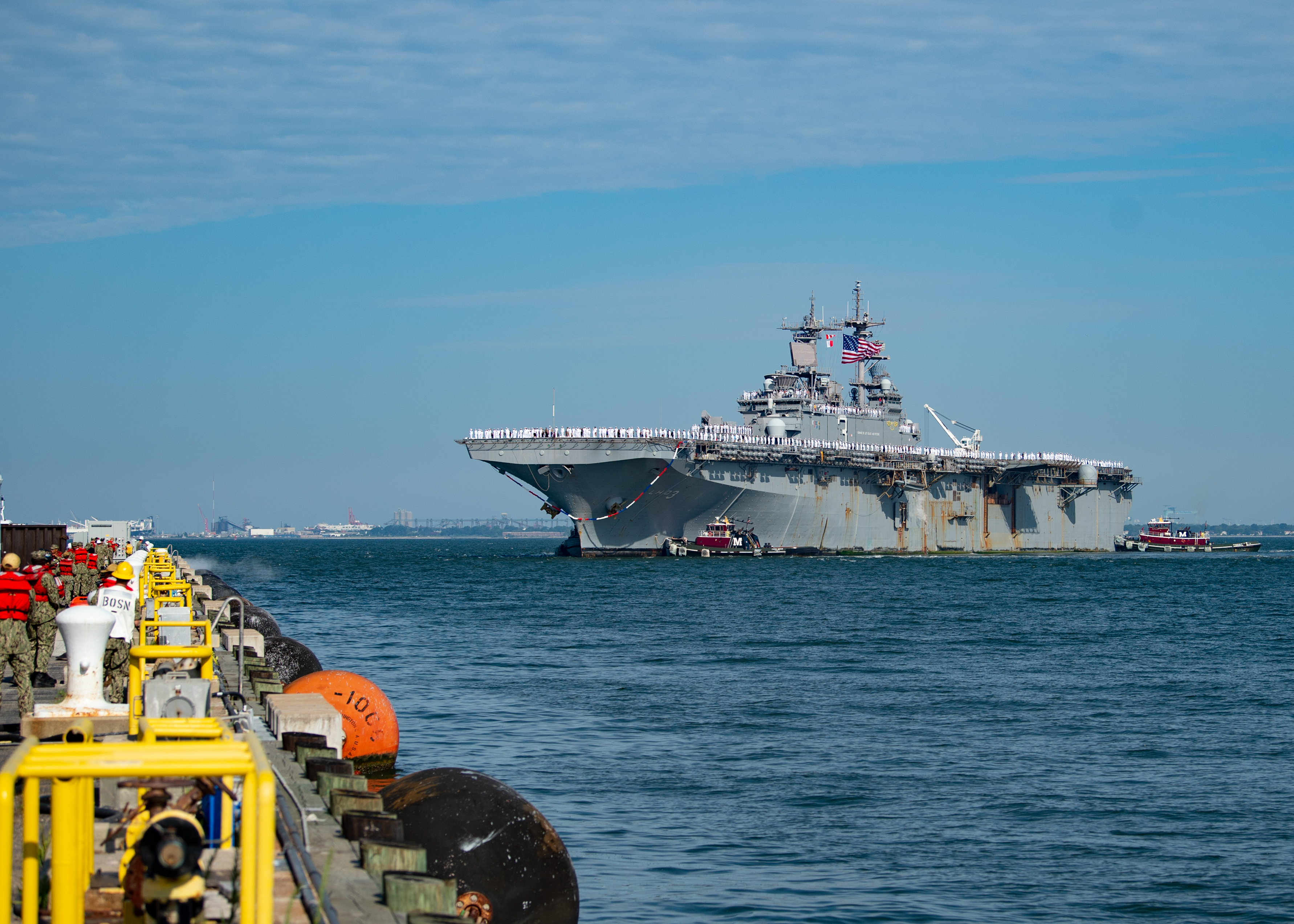 Still, Chief of Naval Operations Adm. Mike Gilday said last week after touring the fire-damaged hull of Bonhomme Richard that he wanted to address training, planning and procedures related to ship fires now, because “you don’t want to have another one like it. … I’m not waiting for this to potentially happen again.”

Today, Assistant Secretary of the Navy for Research, Development and Acquisition James Geurts, who joined Gilday for the Friday Bonhomme Richard tour, reiterated that point, saying “we’re making sure that we don’t have a follow-on incident to this (Bonhomme Richard) incident and that we learn from it from Day 1 as we move forward.”

Geurts said a “12-star letter” from the heads of Naval Forces Europe and Africa, U.S. Fleet Forces Command and U.S. Pacific Fleet was sent to ship commanders, asking them to redouble their efforts to ensure ship and crew safety. Geurts added that he’s overseeing a similar effort on the private shipyard side to ensure Navy contractors are similarly reviewing their maintenance safety procedures to avoid another major ship fire.

While speaking at an online event hosted by the United States Navy Memorial, Geurts said the Kearsarge incident was “very minor” but that “it’s also a constant reminder the threat is there, big and small, so we took some action with the contractor there to ensure that we had all the procedures and everything else right. So while a minor incident, we want to make sure that we’ve got all the procedures there. So we’re redoubling across the force.”

Paolino told USNI News that NASSCO has extensive fire-prevention measures in place at its repair yards, in line with Navy requirements.

“Safety, including hot work safety, is the primary consideration in all that we do here at NASSCO. Daily shipboard inspections are conducted jointly with the Navy, our project management teams, and our safety professionals. Any identified discrepancies are not just corrected, they are recorded, indexed, and reviewed weekly by senior management. If and when there is an incident, we analyze it to see what preventative measures we can put in place over and above current requirements,” he said.
“We recently completed a large-scale fire safety drill. Our NASSCO Fire Department worked with Southwest Regional Maintenance Center (SWRMC), the Coronado Fire Department, and the San Diego Fire Department, in order to demonstrate proficiency in communication and coordination among NASSCO Fire, ship’s force, city fire and emergency services in responding to shipboard fires that may occur in our shipyard. We require Permit Authorizing Individual (PAI) training for all individuals that will sign off on hot work. We require fire watch training for all individuals performing hot work.”