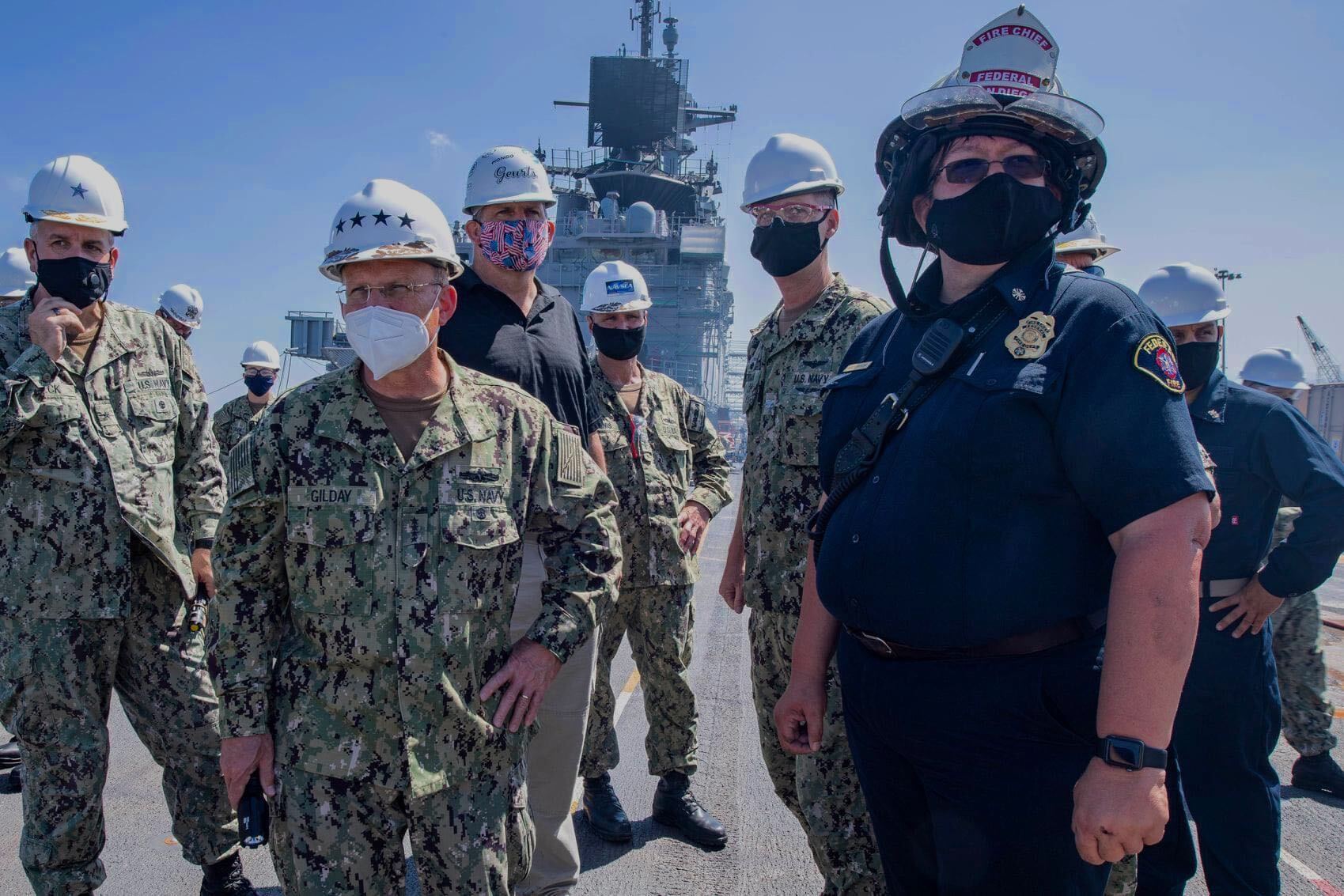 NAVAL BASE SAN DIEGO, Calif. – The Navy’s top officer met with firefighters Friday morning and inspected the damaged decks and spaces inside USS Bonhomme Richard (LHD-6), six days after a devastating fire spread through the warship.

“There will be a thorough investigations that will determine the next steps in a variety of areas. Make no mistake: We will follow the facts of what happened here, we will be honest with ourselves, and we will get after it as a Navy,” Adm. Mike Gilday, the chief of naval operations, told reporters during a briefing at Naval Base San Diego.

“My intention is for the investigations to be made available to the public when they are completed,” said Gilday. The CNO was joined at the briefing by Rear Adm. Philip Sobeck, the Expeditionary Strike Group 3 commander in San Diego who led several press briefing updates this week.

At Pier 2, Bonhomme Richard sat with an obvious list to port and its forward mast collapsed over the superstructure.

“We have not seen a fire of this magnitude on a Navy ship in recent memory, at least in my career,” Gilday said.

He stopped at the nearby emergency operations center, which provided a command-and-control node for coordinating the fire and damage-control response, and then went aboard the amphibious assault ship.

“As I walked through the ship today, this morning, I went four decks below the flight deck and then went up to the flight deck,” he said. “I took a look at the superstructure. I was able to get a good sense of the extent of the damage – and the damage is extensive.

While the investigations get underway and questions swirl about the fire’s cause and breadth of damage, senior commanders already are calling on the fleet to ensure procedures and practices are in place to prevent any similar incident.

That message, issued this week by U.S. Fleet Forces Command in Norfolk, Va., “directs every ship in the Navy to ensure that our equipment is ready, that our people are well-trained, and our procedures are rehearsed so we can all learn from this tragedy,” Gilday said.

More immediately, he said, the Navy already has begun an assessment “to take a look at structural, electrical, mechanical damage with experts from industry who actually built the ship” and with experts from the Norfolk Naval Shipyard, which designed the ship, along with NAVSEA personnel familiar with structural damage to ships in prior incidents. “They’ll be making that determination – this last assessment – on what the next steps are for whether we repair or whether we don’t,” he added.

It’s unclear yet how soon any of those decisions will be made. “I am 100-percent confident that our defense industry can put this ship back to sea,” Gilday said. “But, having said that, the question is: Should we make that investment in a 22-year-old ship? And I’m not going to make any predictions until we take a look at all the facts and we follow the facts and we can make reasonable recommendations up the chain of command on the future steps, any repair efforts, future repair efforts of Bonhomme Richard.”

Gilday also said the ship’s duty section at the time of the fire is “something we are going to take a look at, so whether or not we had an adequate amount of people onboard for this particular environment, given the fact that the ship was at a certain point in maintenance, and certain equipment could have been inoperable in terms of firefighting equipment. We need to go through this, catalog it all and get an understanding of whether or not we had it right. And if not, I would quickly adjust across the fleet to make sure it doesn’t happen again.”

Sobeck acknowledged earlier in the week that the ship’s fire suppression system was off when the fire began, due to the stage of the ongoing maintenance period the ship was in. 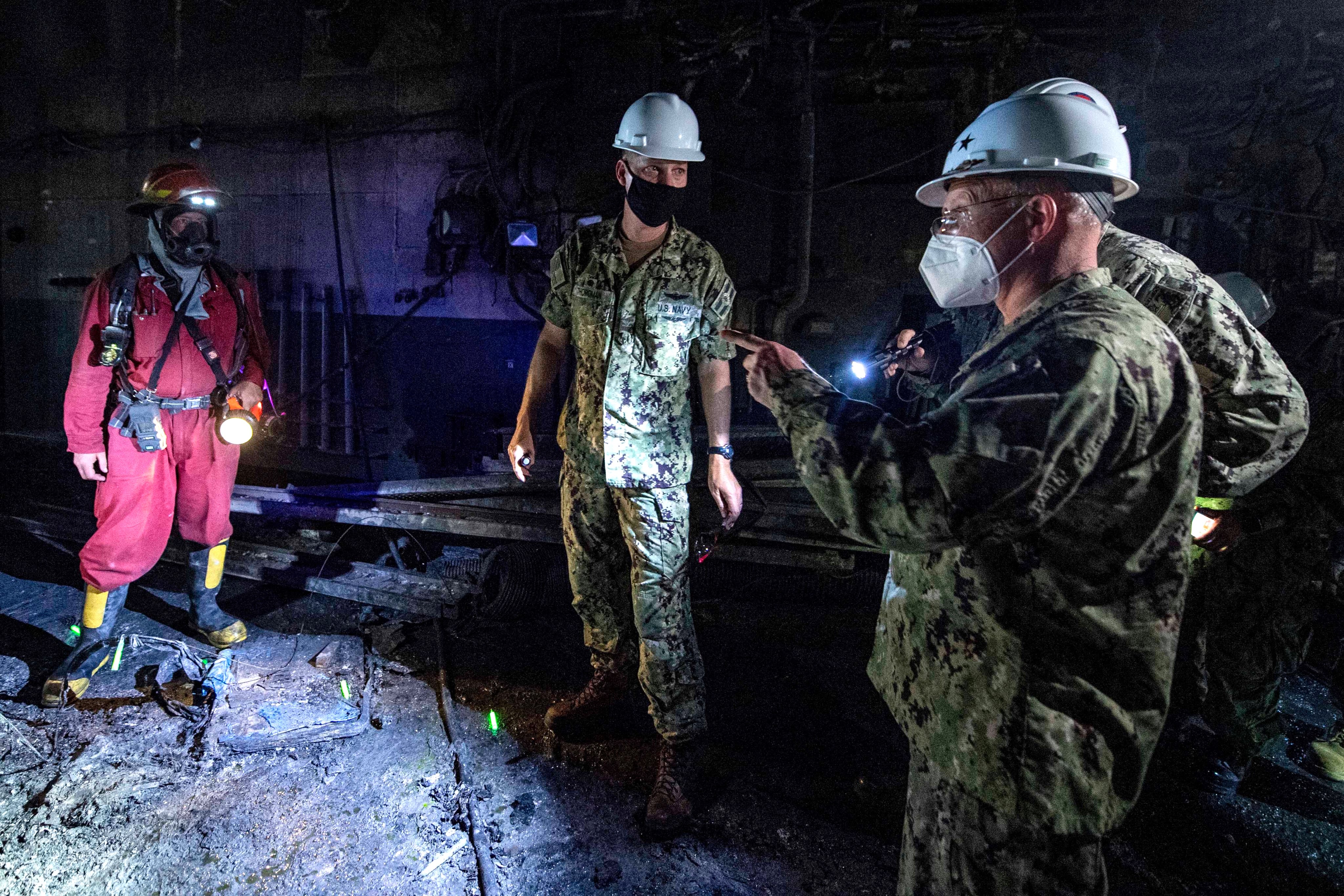 Gilday praised the firefighting teams. “People were moving to the sound of gunfire,” he said.

It’s been grueling work as those fire teams of sailors and firefighters faced some “major impediments” as they attacked the fire, especially in the early hours and days, he said.

The fire was first reported in the aft section of the ship in one of the lower vehicle decks. A big problem was the winds blowing across San Diego Bay. Prevailing winds blow from the Pacific Ocean and toward the naval station’s piers along the east side of the bay.

“This fire probably couldn’t been at the worst point on the ship, in terms of its source, that allowed it to spread up elevator shafts, as an example, and exhaust stacks, as an example, to take that fire up into the superstructure and then forward,” said Gilday. “So I think that the wind was a significant factor.”

Another problem came from a series of explosions or blasts – one heard 13 miles away – that happened as firefighting teams worked inside the ship and added to the danger, obstacles and debris that fueled fires. Those “caused the commanding officer, who is really looking at safety first: he needed to save the ship, he needed to balance that with the safety of the firefighters,” Gilday said. “So there were times when he needed to back those firefighters off of the ship.

“At one point, the explosion was so great that it blew debris across the ship, across the pier and onto the ship that was across the way.” Arleigh Burke-class destroyers USS Fitzgerald (DDG-62) and USS Russell (DDG-59) were berthed on the other side of the pier but were moved off about five hours after the fire began.

“The situation was very tenuous,” Gilday added. “I think the commanding officer made some very sound decisions, in terms of how to attack the fire very deliberately. I think again the teamwork involved from a number of different agencies … belies the fact that the training that we do on a recurring basis, week by week with federal fire, pays off with an incident like this.”

The fire began as Bonhomme Richard was about “two-thirds” through a maintenance period that included a completed dry dock phase at the nearby General Dynamics NASSCO yard as part of a $249-million maintenance availability that began in late 2018 and originally was slated to be done in May. While at the NASSCO shipyard, the ship got updates and retrofits to support the Marine Corps’ advanced F-35B Lightning II Joint Strike Fighter.

The fire is another in a line of mishaps and incidents involving ships and vessels undergoing maintenance, which has raised questions about the risks and adherence to procedures and safety measures by both Navy and contractor personnel during those critical periods.

“That’s a good question. When we have a ship in maintenance, there are mitigation plans in place that the CO and Fed Fire take a look at for every ship, ’cause it’s a little bit different,” Gilday said, in response to a reporter’s question.

“I can’t speak in any detail to the procedures or the plans that were in place for Bonhomme Richard,” he said, “but I will tell you that plan is one that’s agreed upon together by the CO of Bonhomme Richard, who has ultimate responsibility, but also Fed Fire, who assists us with any kind of incidents on base.”

“They train to those plans and to those procedures, with respect to the mitigations in place,” he said, noting “every ship is a little bit different in how it’s going to be rigged.”

With the scope of this latest fire, “you don’t want to have another one like it,” Gilday said, “so I’m not waiting for this to potentially happen again.

“Ships are a risky place to work. Maintenance availabilities are higher risks. So that’s why the fleet commanders have gone out… with a very detailed message to say in the next five days, I want every CO of every ship to assess the training levels of their people, to assess whether or not their equipment is adequate in terms of operability and in terms of placement and in terms of numbers, right, so they have the right resources in place if there’s a fire,” he said.

He noted that ships are conducting fire drills and flooding drills daily. But he added that, “as good as you always think that you are, you’re never as good as you think you are. So that’s the real takeaway, to force these COs to take a sharper look at how they are positioned right now in whatever unique environment that they’re in to make sure that their crews are ready to go.” 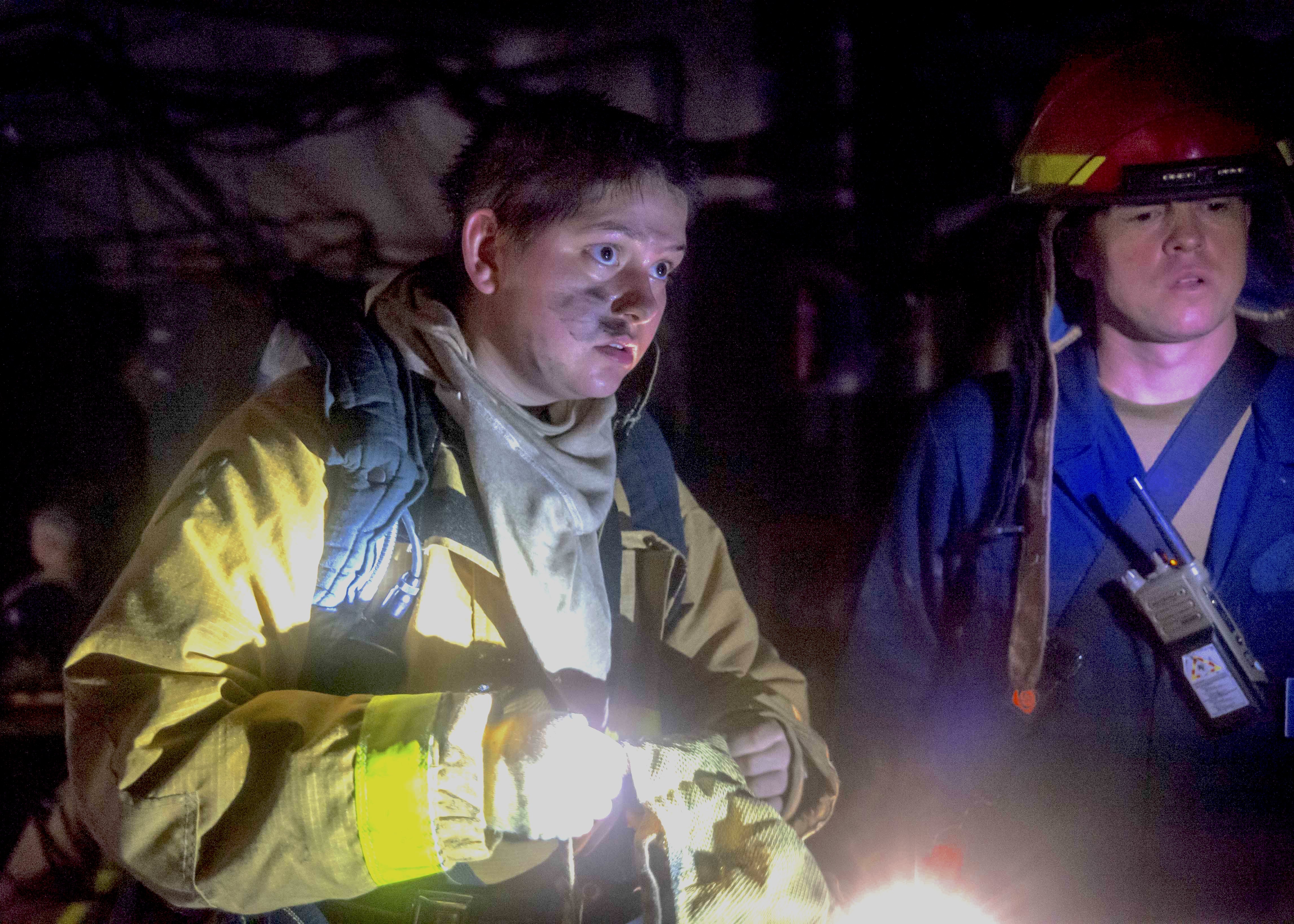 Gilday said his first concern, upon hearing about the fire Sunday, was safety. “The main question I had back in Washington was whether or not we had the right resources in place for the commander to do everything he had to do to get the fire under control,” he said. “What I didn’t realize at the time, and I realized today as I was talking to the sailors in particular – is that we did not have to make any phone calls to get people to respond to this fire. We had sailors responding in numbers that stayed on scene for days. … We had to order many of them to go home.”

More than 400 sailors from around the waterfront joined firefighting efforts. On Friday, Gilday met with 150 ship’s crew and firefighting teams that were preparing to enter the ship, and he said he was struck by their “resiliency and their fearlessness, their confidence and … their competence.”

Among those he spoke with was a third-class petty officer getting ready for her eighth fire mission aboard Bonhomme Richard, who told him how much she valued the training she had received since boot camp.

“She was very proud of what she did, and the teamwork that was involved with these small teams that were going in to fight the fire,” he said. “They were a mixture of sailors from Bonhomme Richard, sailors from other ships, fed and local firefighters in an environment where you could only see two feet in front of you, there was no lighting. It was deep heavy smoke.”

The fire, to the sailors on Bonhomme Richard, “is a gut-punch,” Gilday said. “It’s the sailors’ home. They identify with that ship, with these ball caps, they mean something,” he said. “The names of those ships mean something to those sailors.

“This is where they’re going to fight from … if they have to go to sea,” he said. “So for every one of them, it’s a personal loss,” he said, adding, “right now they are dealing with the heat of the moment in terms of making sure that the environment is safe aboard the ship so they can get aboard and start cleaning out the debris and be ready for the next steps, whatever they might be. But we’re keeping a close eye on them. We’re conscious of that fact.”