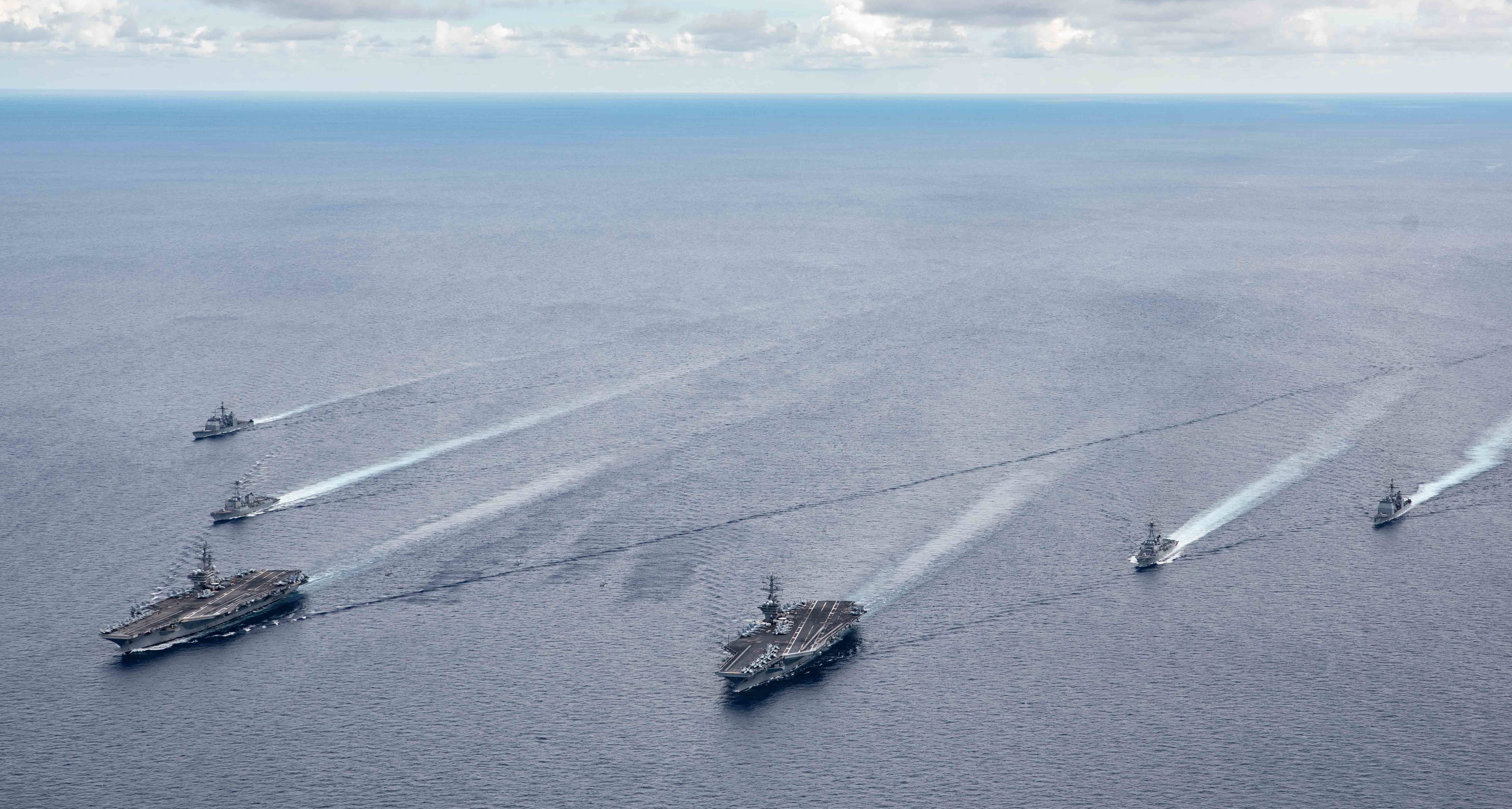 Days after the State Department publicly rejected China’s claims to much of the South China Sea, two carrier strike groups resumed operating in tandem in the region, the U.S. Pacific Fleet announced on Friday.

The Ronald Reagan and Nimitz carrier strike groups paired up for dual-carrier operations for the second time in a month in the South China Sea.

While careful not to tie the operations to a specific political moment, the Navy said the operations are “to reinforce our commitment to a free and open Indo-Pacific, a rules-based international order, and to our allies and partners in the region,” Rear Adm. Jim Kirk, commander of the Nimitz Carrier Strike Group, said in a statement.

In late June, USS Nimitz (CVN-68) and USS Ronald Reagan (CVN-76) paired up in the Philippine Sea and maneuvered in to the South China Sea for July 4.

The new set of drills follows a Monday message from Secretary of State Mike Pompeo saying the U.S did not recognize China’s claim to the South China Sea built upon the so-called Nine-Dash Line.

“The PRC has no legal grounds to unilaterally impose its will on the region,” reads a statement from Pompeo.
“Beijing has offered no coherent legal basis for its ‘Nine-Dashed Line’ claim in the South China Sea since formally announcing it in 2009.”

In a briefing to the Center for Strategic and International Studies following the declaration, David Stilwell, assistant secretary of state for East Asia and the Pacific, said the U.S. would continue to oppose Chinese “gangster tactics” in the region.

To assure regional allies, the U.S. would use “physical demonstrations of support,” Stilwell said, including naval freedom of navigation transits, presence patrols by carrier strike groups and strategic aircraft over-flight of the South China Sea.

In parallel, the Chinese held their own drills off the Paracel Islands in early July and have waged their own rhetorical campaign.

“The U.S. has been flexing its muscles and making provocations by dispatching its advanced military planes and vessels to the South China Sea, where the U.S. military conducted ‘navigation hegemony’ operations for many times, which threatens regional security and stability,” Senior Colonel Ren Guoqiang, spokesperson of China’s Ministry of National Defense, said in a press statement on July 9.
“We hope the U.S. side will make self-reflection, stop its provocative military actions in the South China Sea and its groundless accusation against China and stop sowing discord among countries in the region and creating tensions.”

After weeks without a carrier on patrol in the Western Pacific, in June the U.S. had three active carrier strike groups that mixed and matched operations in the South China and Philippine seas.