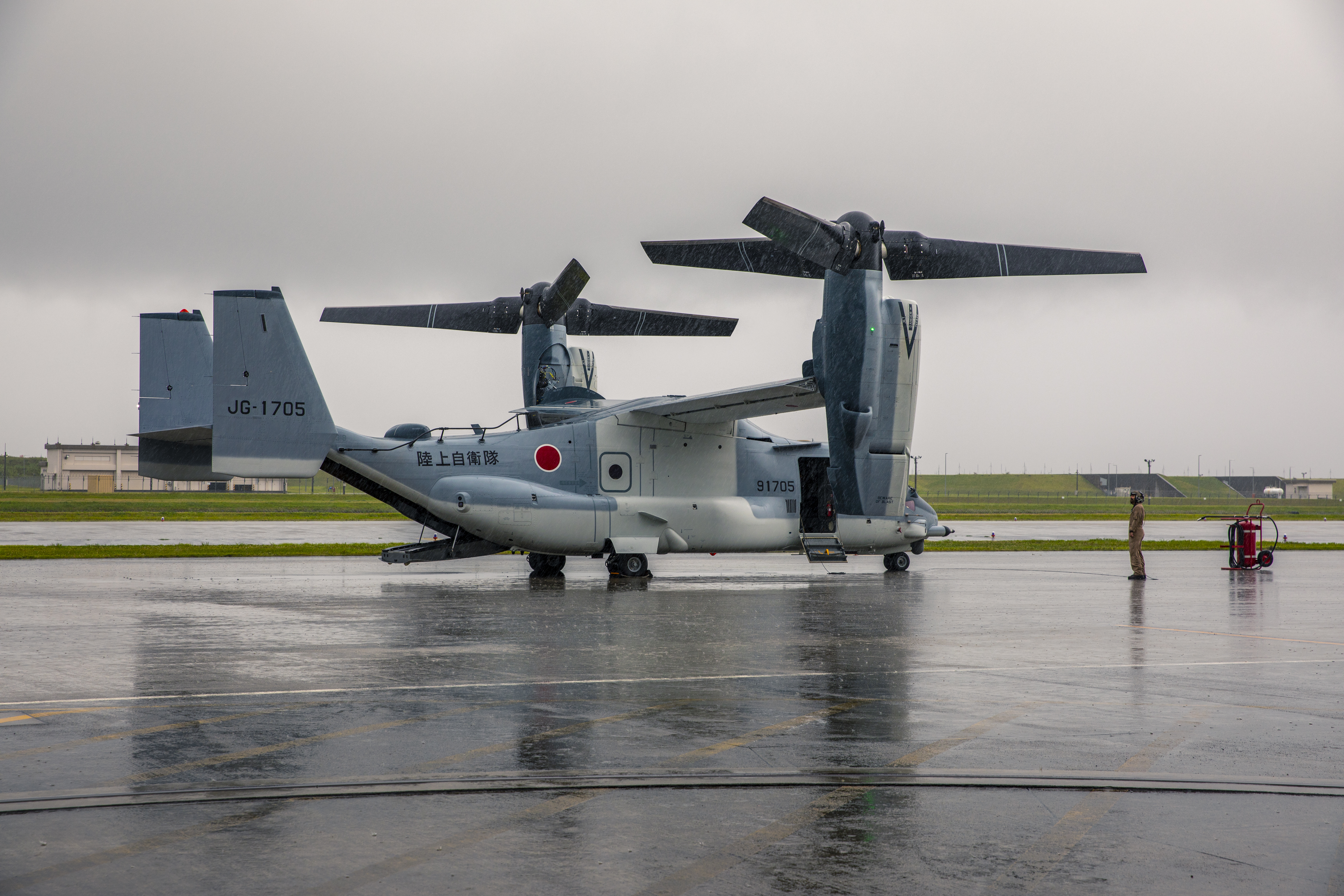 Japan accepted delivery of its first Bell Boeing V-22 Osprey on Friday, making it the first nation outside the U.S. to own and operate the tiltrotor aircraft.

The Japan Ground Self-Defense Force (JGSDF) took delivery of the aircraft at Camp Kisarazu, across the Tokyo Bay from Yokosuka, according to news releases from Bell and Boeing, who collaborate on the aircraft program.

“Congratulations to Japan on becoming the first international operator of the Osprey,” Kurt Fuller, Bell Boeing program director, said in a release.
“The delivery of the Japanese V-22 represents a milestone for revolutionary aircraft capabilities for the Government of Japan and is a testament to our enduring friendship. The Osprey will provide Japan a tremendous advantage, unlike ever before, to respond to a broad range of challenges throughout the Asia Pacific region.”

The Japanese V-22 variant has a unique configuration with a Japanese-specific communication system, according to the news releases. Despite the different communication system, JGSDF personnel have been working with U.S. Marines since May to learn how to operate the aircraft ahead of accepting delivery of their own Osprey.

“This is an exciting moment in our partnership with the JGSDF; we have had the pleasure of working with them state-side to produce, develop, train and maintain their initial fleet of aircraft,” Marine Corps Col. Matthew Kelly, program manager for the V-22 Joint Program Office (PMA-275), said in the news release.
“This arrival marks a key step in standing up its V-22 fleet, and more importantly, the continued collaboration between our nations.” 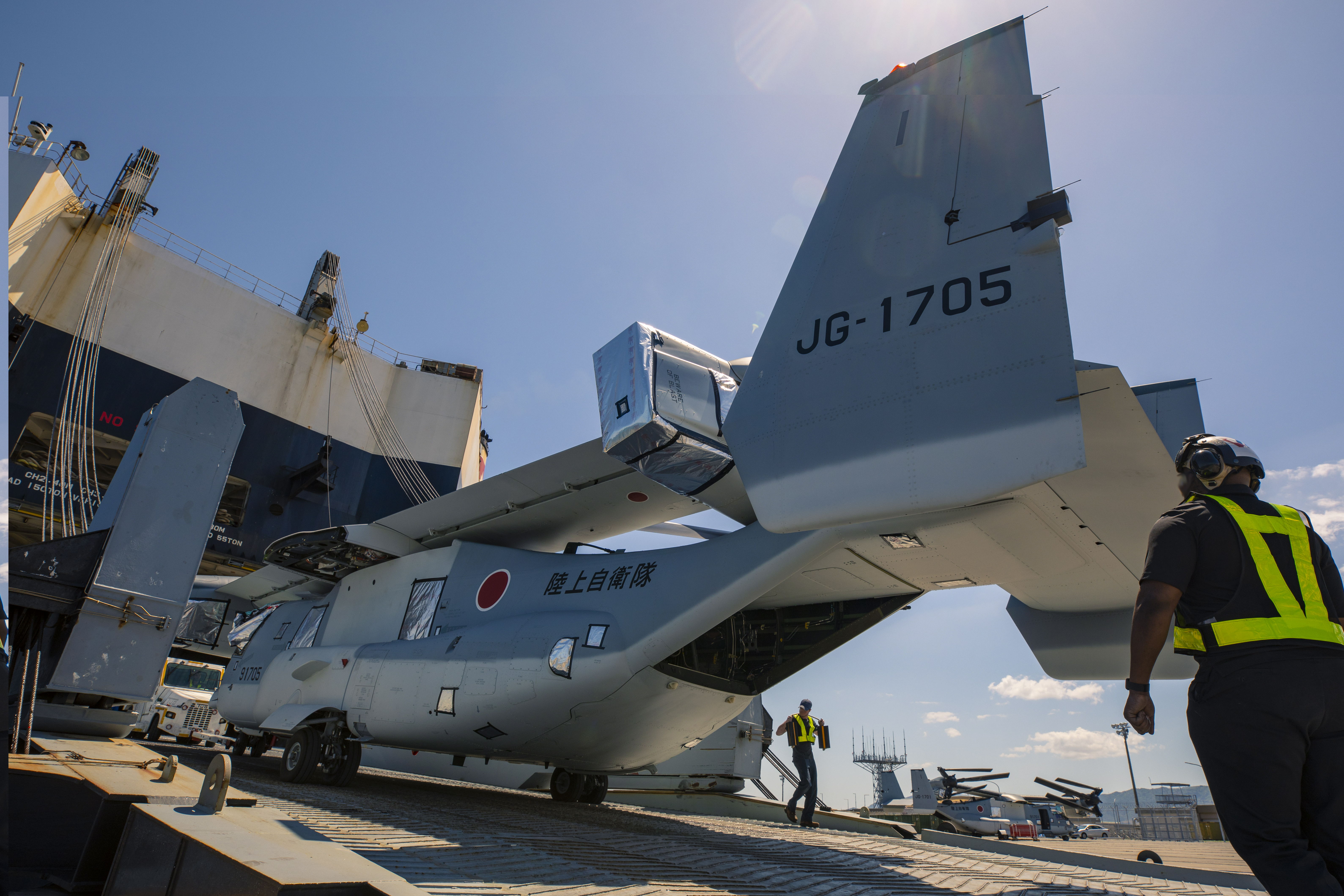 The start of Japan’s V-22 fleet comes shortly after the U.S. Navy also accepted its first V-22 – called the CMV-22 – to carry out the carrier onboard delivery (COD) mission once the aging C-2A Greyhound propeller planes retire. Bell Boeing delivered the first aircraft to the “Black Jacks” of Air Test and Evaluation Squadron (HX) 21 in February, and the first operational aircraft arrived at Naval Air Station North Island in California last month to begin building up the inventory of the “Titans” of Fleet Logistics Multi-Mission Squadron (VRM) 30.

Marine Corps pilots and maintainers have also helped train their Navy counterparts on the aircraft, much like they have been doing in Japan. The Navy variant has extended range due to additional fuel tanks, a beyond-line-of-sight high-frequency radio, a public address system for passengers and an improved lighting system for cargo loading, all to assist in the COD mission ferrying people, supplies and mail across a carrier strike group at sea.

Unlike the C-2, which could only fly from shore to the aircraft carrier, the V-22 will be able to reach the surface combatants in the CSG directly, thanks to its ability to land and take off vertically like a helicopter.

Prior to Japan deciding to buy the V-22 in 2015, Japanese citizens long had concerns about American V-22s operating out of Japanese bases, particularly Okinawa, due to the aircraft’s early safety record. Even as recently as 2018, after the V-22 had established itself as a safe and reliable aircraft, Defense News reported that safety concerns from residents near Camp Kisarazu delayed the delivery of Bell Boeing’s first aircraft to Japan.