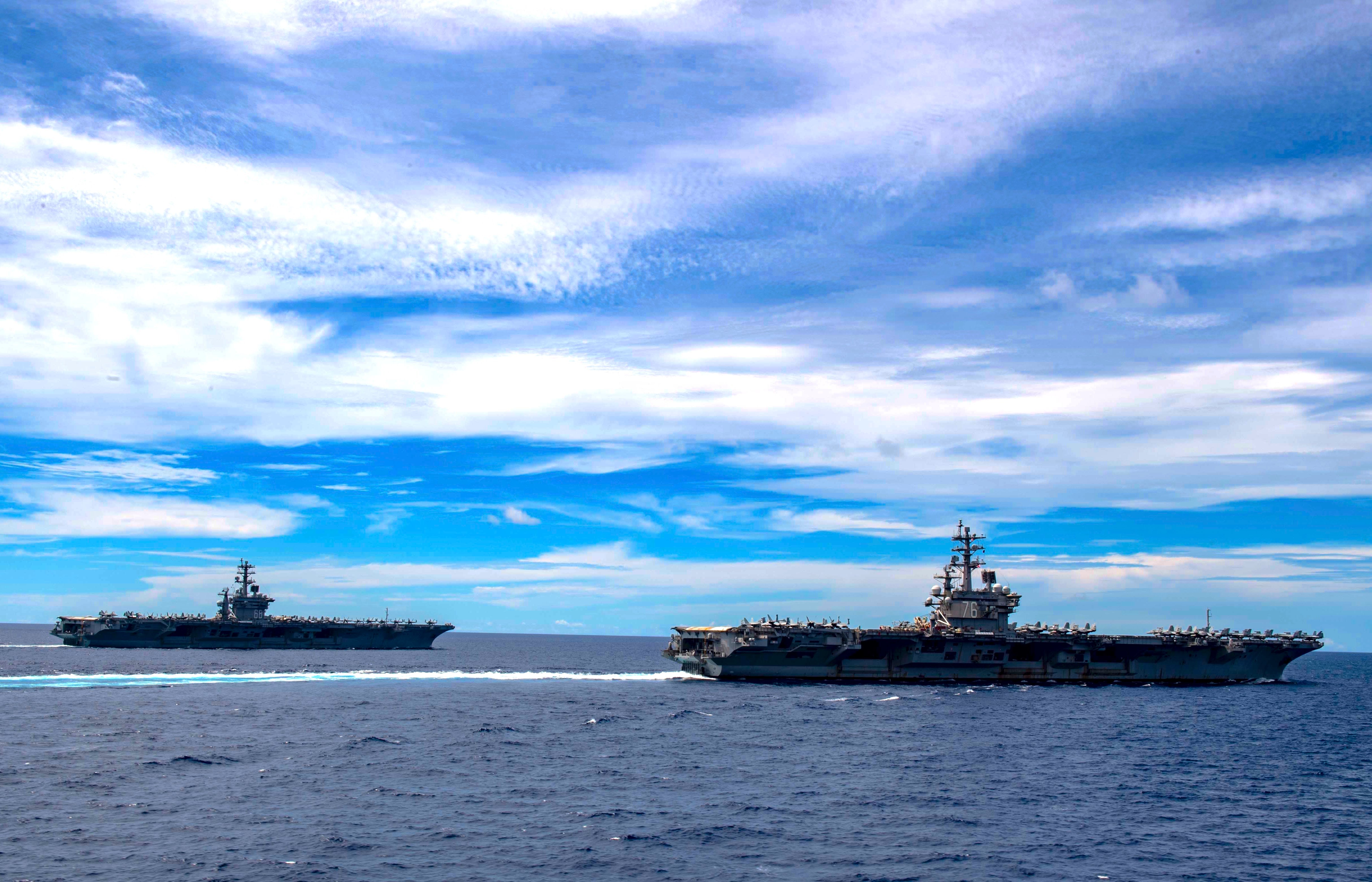 The U.S. and Chinese navies are holding competing naval exercises in the South China Sea, as the Beijing accuses Washington of militarizing the region.
On Saturday, the U.S. Navy’s Reagan and Nimitz carrier strike groups transited from the Philippine Sea to the South China Sea and held the first dual-carrier drills there since 2014.

USS Nimitz (CVN-68) and its strike group have been involved in near-constant dual-carrier strike group operations since June 21, first with the Theodore Roosevelt CSG and then the Reagan CSG.

USS Theodore Roosevelt (CVN-71) operated with Nimitz in the Philippine Sea. The exercises follow a lull in U.S. carrier operations in the Western Pacific while Theodore Roosevelt was sidelined in Guam dealing with a COVID-19 outbreak.

After Nimitz and its escorts took a quick break in Guam, Japan-based USS Ronald Reagan (CVN-76) and its strike group joined for a lengthier round of dual-carrier, or carrier strike force, operations that have spanned first the Philippine Sea and now the South China Sea.

“The Nimitz Carrier Strike Force celebrated Independence Day with unmatched sea power while deployed to the South China Sea conducting dual-carrier operations and exercises in support of a free and open Indo-Pacific,” reads a Saturday statement from the Navy.

Beijing conducted parallel drills off of the Paracel Islands in contested waters.

“The military exercises are the latest in a long string of [People’s Republic of China] actions to assert unlawful maritime claims and disadvantage its Southeast Asian neighbors in the South China Sea,” reads a statement from the Defense Department.
“The PRC’s actions stand in contrast to its pledge to not militarize the South China Sea and the United States’ vision of a free and open Indo-Pacific region, in which all nations, large and small, are secure in their sovereignty, free from coercion, and able to pursue economic growth consistent with accepted international rules and norms.”

The Pentagon said the Chinese exercises are a departure from the 2002 Declaration on the Conduct of Parties in the South China Sea in which China and other nations with overlapping claims agreed to curtail military exercises in the region. 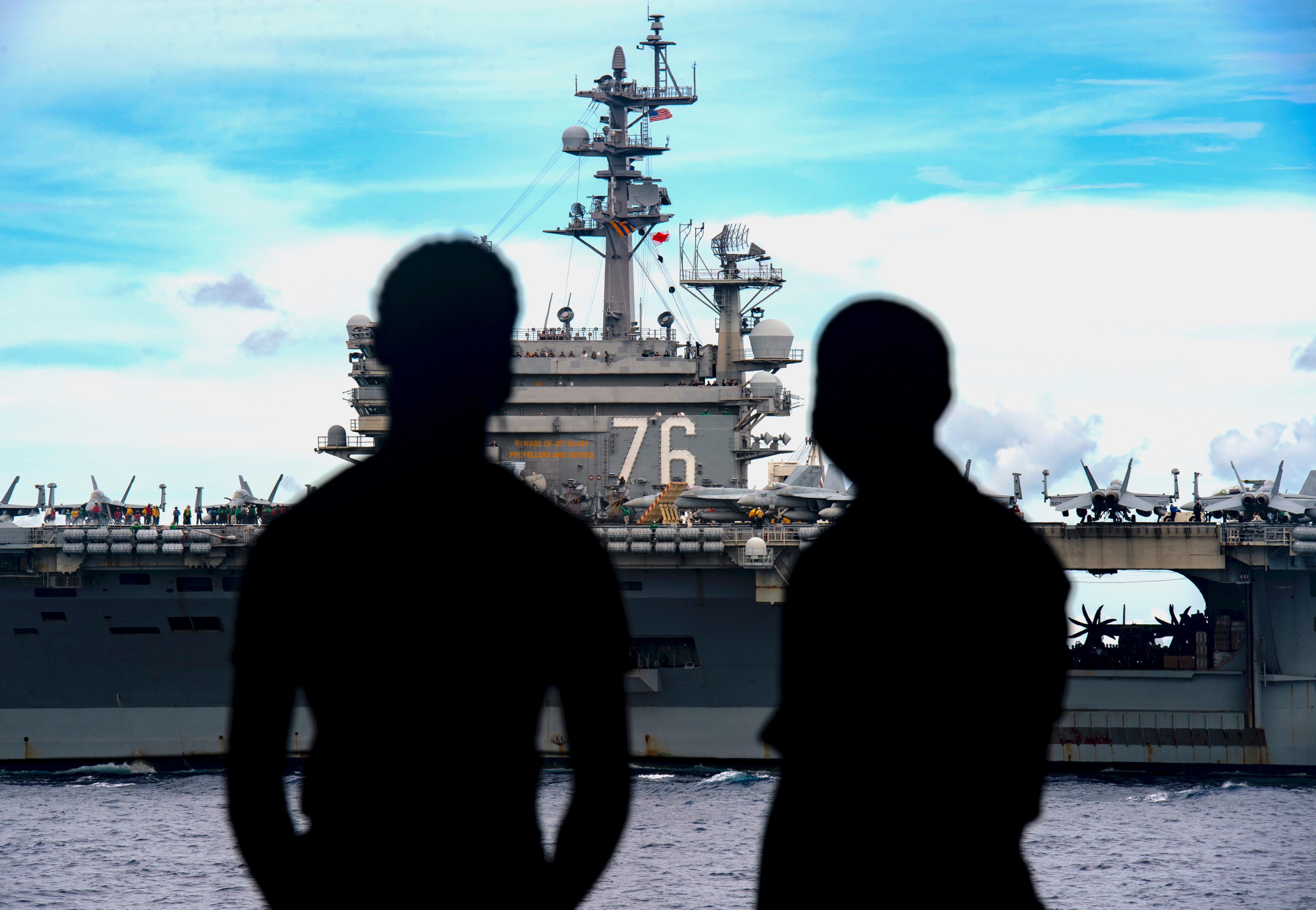 In a press conference, Chinese officials pushed back against the assertion that their exercises violated any agreement and reaffirmed their territorial claims in and around the islands off the coast of Vietnam.

“I want to stress once again that the Xisha Islands are indisputably China’s territory. China’s military training in the waters surrounding the Xisha Islands is within China’s sovereignty and beyond reproach,” Chinese Ministry of Foreign Affairs spokesperson Zhao Lijian said on Monday, using the Chinese term for the Paracel Islands.
“At present, thanks to the joint efforts by China and ASEAN countries, the situation in the South China Sea is generally stable and witnessing sound development. Under such circumstances, it is completely out of ulterior motives that the U.S. flexes its muscles by purposely sending powerful military force to the relevant waters for large-scale exercises. The U.S. intends to drive a wedge between regional countries, promote militarization of the South China Sea and undermine peace and stability in the region. The international community, especially the regional countries, have seen this very clearly.”

According to press reports on Monday, Chinese ships were operating near the U.S. carrier formations.

“They have seen us, and we have seen them,” Nimitz Carrier Strike Group commander Rear Admiral James Kirk told Reuters. “We have the expectation that we will always have interactions that are professional and safe. … We are operating in some pretty congested waters, lots of maritime traffic of all sorts.”