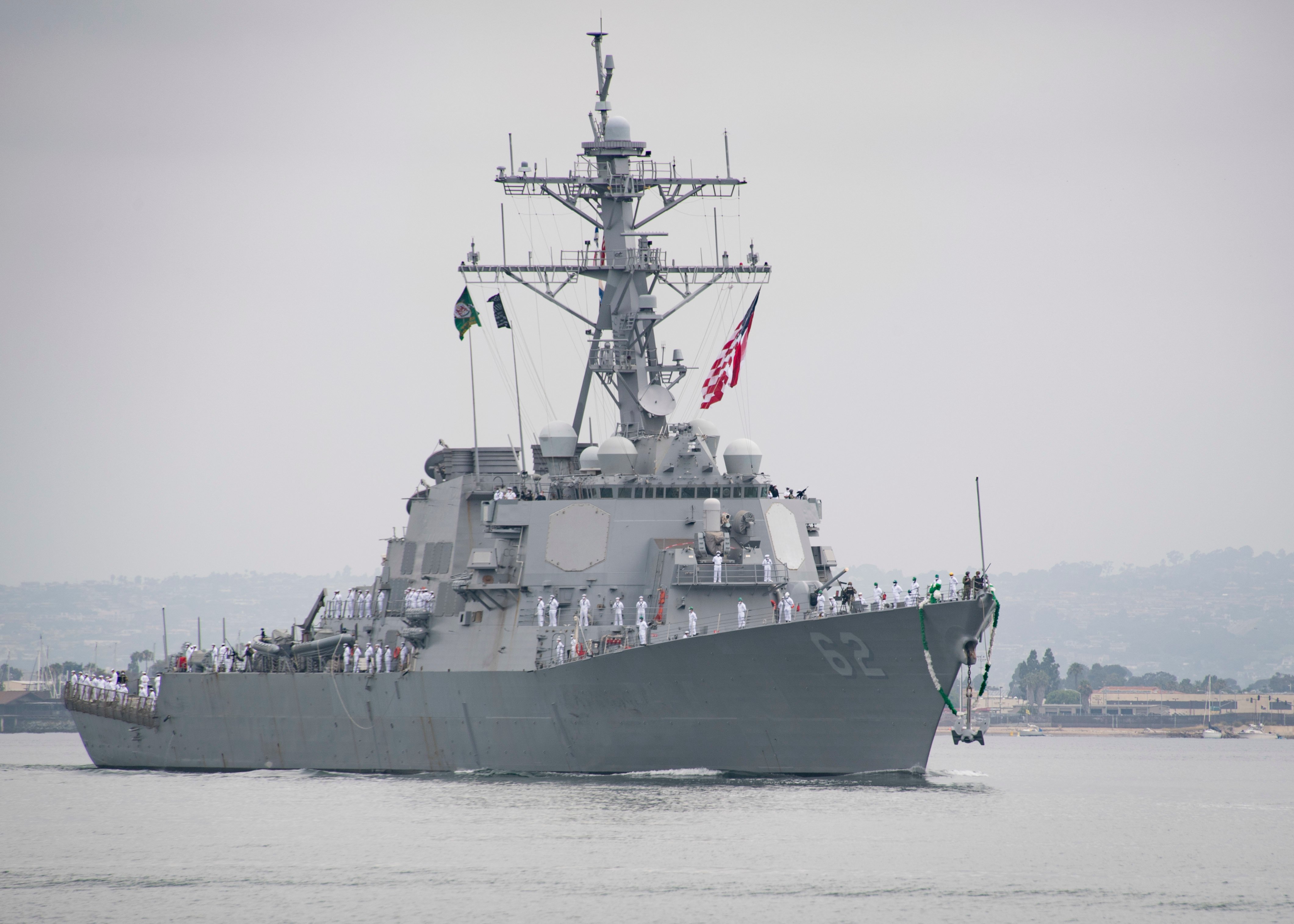 The guided-missile destroyer USS Fitzgerald (DDG 62) arrives at her homeport of Naval Base San Diego on July 2, 2020, following more than two years of restoration and modernization at Huntington Ingalls Industries – Ingalls Shipbuilding Division’s Pascagoula, Mississippi shipyard. The ship was damaged during a 2017 collision that claimed the lives of seven Sailors. While in San Diego, the crew will complete extensive training and certifications through Basic, Advanced, and Integrated phases of training. US Navy photo.

Guided-missile destroyer USS Fitzgerald (DDG-62) arrived at its new homeport of San Diego today, following a two-and-a-half-year repair period after the warship was involved in a fatal collision in 2017.

Fitzgerald had been part of the Forward Deployed Naval Force-Japan in U.S. 7th Fleet prior to the collision. Rather than return to Japan, the Navy determined Fitzgerald would operate out of San Diego.

“Returning Fitzgerald to the Fleet has truly been a team effort,” Commanding Officer Cmdr. Scott Wilbur said in a Navy news release today.
“I’m incredibly proud of what this crew has done over the last few years, bringing our ship back to the Fleet. We’re happy to be home in San Diego to continue our training. I’m excited for what lies ahead.”

The ship left Ingalls Shipbuilding in Mississippi in mid-June for a trip through the Panama Canal and to California.

The Navy noted in a press release that the crew is ready for operations, having already completed multiple training and certification events, such as Navigation Assessment and Light Off Assessment (LOA).

“The crew also completed 140 simulator hours prior to starting Basic Phase. Additionally, Fitzgerald already completed three of the 23 certifications – Search and Rescue, Medical, and Anti-Terrorism – which are required for all naval surface ships prior to operational tasking. While in San Diego, the crew will continue to conduct simulator and at-sea training in order to be ready to operate the ship at sea,” reads the news release.

“The Huntington Ingalls Team in coordination with Naval Surface Force, U.S. Pacific Fleet and Naval Sea Systems Command has ensured USS Fitzgerald is a repaired, modernized and capable warship,” Capt. Jay Clark, Commander of Destroyer Squadron 1 in San Diego, said in the news release.
“The Fighting Fitz Crew is resilient, competent and ready to succeed in the extensive system validations, training, and certifications needed for follow on high-end operations.”

The ships operating in 7th Fleet out of the Yokosuka, Japan, homeport have changed over the past years, not just due to the loss of Fitzgerald in the FDNF-J fleet. Navy leaders have sought to rotate in the most capable ships, sending in those that have been recently modernized with Aegis Baseline 9 combat system capabilities and sending home those in need of upgrades.

In 2015, the Navy sent in USS Benfold (DDG-65), in 2016 it sent USS Barry (DDG-52) and in 2018 it sent USS Milius (DDG-69) to bring enhanced air and missile defense, surface warfare and anti-submarine capabilities to the Pacific theater.

Today, USS McCampbell (DDG-85) left Yokosuka for a 17-month depot maintenance period in Oregon, as part of the effort to upgrade the older ships still operating out of Japan.

“The security environment in the Indo-Pacific requires that the U.S. Navy station the most capable ships forward. This posture allows the most rapid response times possible for maritime and joint forces, and brings our most capable ships with the greatest amount of striking power and operational capability to bear in the timeliest manner,” reads a Navy statement on McCampbell’s move.