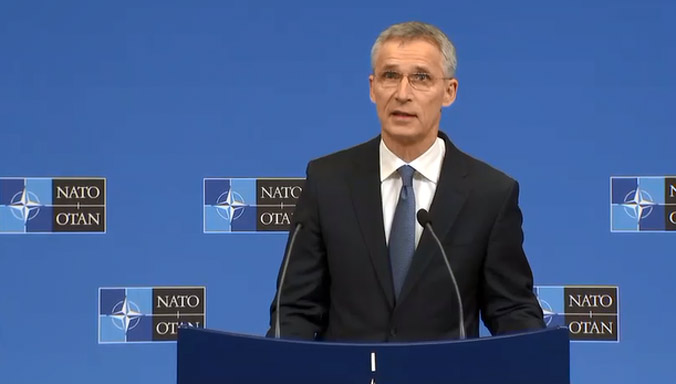 The global pandemic is prompting NATO to look beyond China and Russia in how it can protect its 30 members against deadly threats, NATO’s secretary general said in an online forum on Monday.

Despite ongoing Russian and Chinese disinformation campaigns claiming “allies are not helping each other in a crisis,” Jens Stoltenberg said NATO’s military has actively been aiding members and partner nations in containing the contagion in Europe. He cited the movement of needed medical equipment and personnel to hotspots and the building and operating of field hospitals as examples of how NATO was helping with the effort.

But the outbreak has also exposed new vulnerabilities that have an impact militarily as well. They range from delivery of health care to military forces to supply chains for manufacturing to the importance of advanced telecommunications, Stoltenberg said.

Moscow and Beijing “are trying to divide us” by also claiming NATO members spread the virus globally.

Stressing the importance of resilience in the wake of the deadly toll COVID-19 has taken across North America and Europe, he added, “this is the time to strengthen multi-national institutions” to respond to a possible second wave of contagion and to deal with future pandemics.

Stoltenberg was announcing the NATO 2030 initiative, a look in the future of the alliance.

“This is an opportunity to reflect on where we see our alliance 10 years from now, and how it will continue to keep us safe in a more uncertain world,” Stoltenberg said.
“To do this, we must stay strong militarily, be more united politically and take a broader approach globally.”

When asked about the Trump administration’s proposal to remove 9,500 American soldiers and airmen from Germany, Stoltenberg said only, “we’re constantly consulting with the United States … on the military posture in Europe.”

As examples of that, he mentioned the United States’ rotational presence in Poland, its opening of an Aegis Ashore anti-missile site in Romania, and “seeing its naval presence in Spain and in my country, Norway.”

Stoltenberg said “this is not only about Germany” when looking at the American commitment to the alliance’s future. He pointed to Trident Juncture and other exercises in Europe as examples of Washington’s strong role in NATO. “The European allies and the U.S. are doing more now [together] than we had in many years.” Later, in answer to another question about ensuring American commitment in the future, Stoltenberg cited the standup of the alliance’s Cyber Command, a new emphasis by all to defend its eastern frontiers, and European members spending more on their own security in response to Washington criticism of burden-sharing.

In the future, “we also need to use NATO more politically,” but “we need the political will” to move to a global approach. That translates to closer cooperation with nations like Australia, New Zealand, Japan and South Korea, who share NATO’s standards and beliefs in freedom and democracy, especially as China grows as a military and economic power.

Stoltenberg expects that over the coming decade China’s economy will become the world’s largest. It is already asserting its interests in regions as far apart as the Arctic for possible energy exploration and fisheries and the Mediterranean, “investing in our critical infrastructure.”

“What we see is the rise of China changing the global structure of power” with a defense budget second only to the United States. Beijing is also working more closely with Moscow in security matters, raising new concerns about its intentions in Europe.

As for Russia, Stoltenberg said NATO recognizes the Kremlin is keeping up military pressure on its neighbors while at the same time modernizing its nuclear and missile forces.

“We have responded to that” by increased land, naval and air presence and investment in security to “remove any doubt of a response” in case of an attack on a member, he said. Russia has to realize that “a new arms race will be very costly” to its economy weakened by low energy prices, hard sanctions for past aggression and COVID-19.

“The most important thing is that we can change and adapt” to new realities, he said.

The new reality facing NATO in Afghanistan is the agreement between the United States and the Taliban that could lead to a peace agreement. With about 8,500 soldiers from other allies in Afghanistan, Stoltenberg said “the best way we can help is train Afghan security forces” so they can “fight terrorism themselves.”