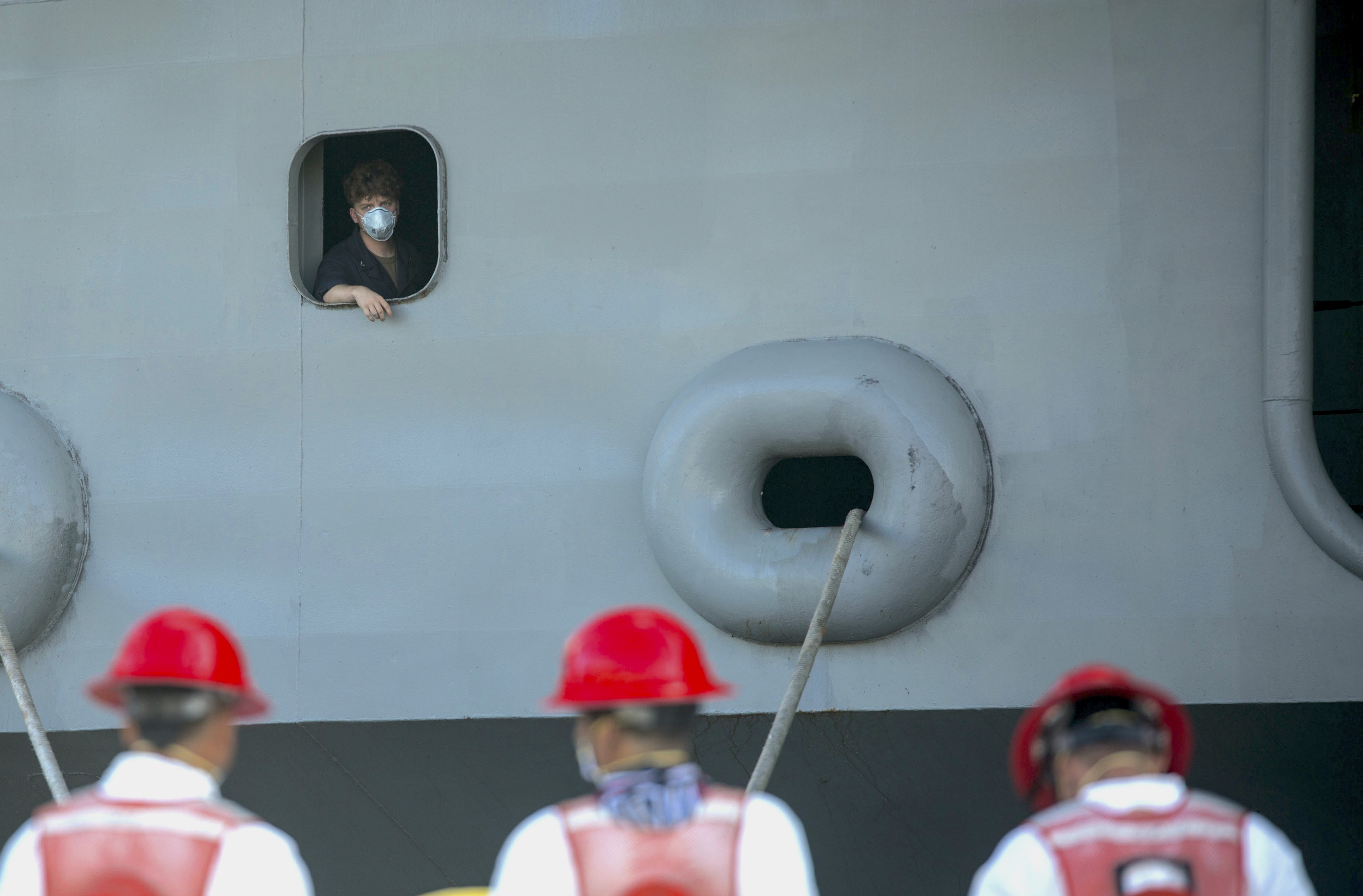 USS Theodore Roosevelt (CVN-71) departs Apra Harbor for carrier qualifications during a deployment to the Indo-Pacific on May, 21, 2020. US Marine Corps Photo

The Navy has made good progress learning how to prevent or contain a COVID-19 outbreak on ships at sea, the head of the service told reporters today, but there are still a lot of unknowns the Navy is working with the Centers for Disease Control and Prevention (CDC) to figure out.

Chief of Naval Operations Adm. Mike Gilday said this morning that “there are a few hundred that are still recovering” from an outbreak on deployed aircraft carrier USS Theodore Roosevelt (CVN-71), which pulled into Guam on March 27 and subsequently has been trying to rid the ship and crew of the coronavirus. The Navy had pulled all sailors off the ship and forced them to remain quarantined for 14 days, allowing them back aboard only after completing the quarantine and then testing negative twice for the virus. Still, Gilday acknowledged, 14 sailors who had returned to the ship reporting feeling symptoms and ultimately tested positive again for the virus.

Gilday said the Navy is working closely with the CDC to understand what risk recovered COVID-19 patients can still pose to healthy individuals and if they can still spread the virus after testing negative or could relapse and be ill again themselves.

“We want to minimize, of course, any risk of additional outbreaks on any of the ships, TR included. And so we’re taking a close look at that with the CDC,” the admiral said during a call with a small group of reporters.

Theodore Roosevelt is at sea today conducting carrier qualifications with about 2,900 sailors out of the full crew of 4,800. The idea behind the carrier qualifications was to bring just the number of sailors needed to test the ship’s systems and ability to operate at sea, while leaving other sailors ashore before slowly getting back to full operations with the full crew.

Gilday made clear, though, that “if she had to sail further west today, if she needed to, we could bring those sailors back aboard and head west. We have contingency plans in place to do that if required.”

Part of the advantage of operating at sea with a smaller group of sailors this week is having the time to solidify new practices on the ship that allow for social distancing, including new practices around serving and eating meals, one-way passageways to limit contact while traversing the carrier, and more.

“This is now becoming part of our DNA and how sailors think about how they move around the ship,” Gilday said. He noted the sailors would also be wearing personal protective equipment while conducting their jobs.

Gilday also noted that all aircraft carriers and amphibious assault ships have onboard intensive care units and testing capabilities, and said the Navy has made contingency plans in all areas of operations in case a ship with an outbreak needed to pull into a port overseas.

Overall, he said, the Navy has learned a lot about preventing an outbreak in the first place, but given that future outbreaks are somewhat inevitable – destroyer USS Kidd (DDG-100) saw an outbreak 30 days after its last port call, calling into question the incubation period of the disease and what it means to have so many sailors be asymptomatic once exposed to the virus – Gilday said he’s also pleased with the progress they’ve made on containment.

“I’d ask you not to look at every COVID case on every ship as a failure. So we are still understanding what the incubation period is of this virus, when it flares up in people that may have it asymptomatically, and that’s very difficult to predict right now. The CDC I think is learning more every day and refining their guidance” based on what the organization is seeing in the civilian population and in the confined environment aboard Navy ships.

“If I use TR as an example: so we had 14 people come back with mild symptoms; they went to medical, they were re-tested and they were positive. So we quickly did contract tracing, and because we’ve changed the way that we move about that ship, the way that they eat their meals, the way that they work together and move around the ship together, the contact list was contained to about three dozen people, which is pretty small given the size of an aircraft carrier and the number of people we have onboard,” the admiral said.

Lessons learned from Theodore Roosevelt and Kidd, among others, are being distributed to the fleet in a clearer way than at the beginning of the pandemic, Gilday added.

“Initially, essentially what we told commanders was, this is the CDC guidelines and we’d like to you to best implement them in kind of a mission command approach with respect to your individual unit and taking into consideration the environment that you’re operating in,” he explained.
“What we’ve learned since mid-March is that we need to be much more specific – and to a certain degree, much more standardized in terms of providing guidance to fleet units – in terms of, this is all we’ve learned from ships like the TR, these are the exact steps we want you to take in order to minimize risk on the prevention side, and then if you do have an outbreak on the ship, here are the steps you need to take.” 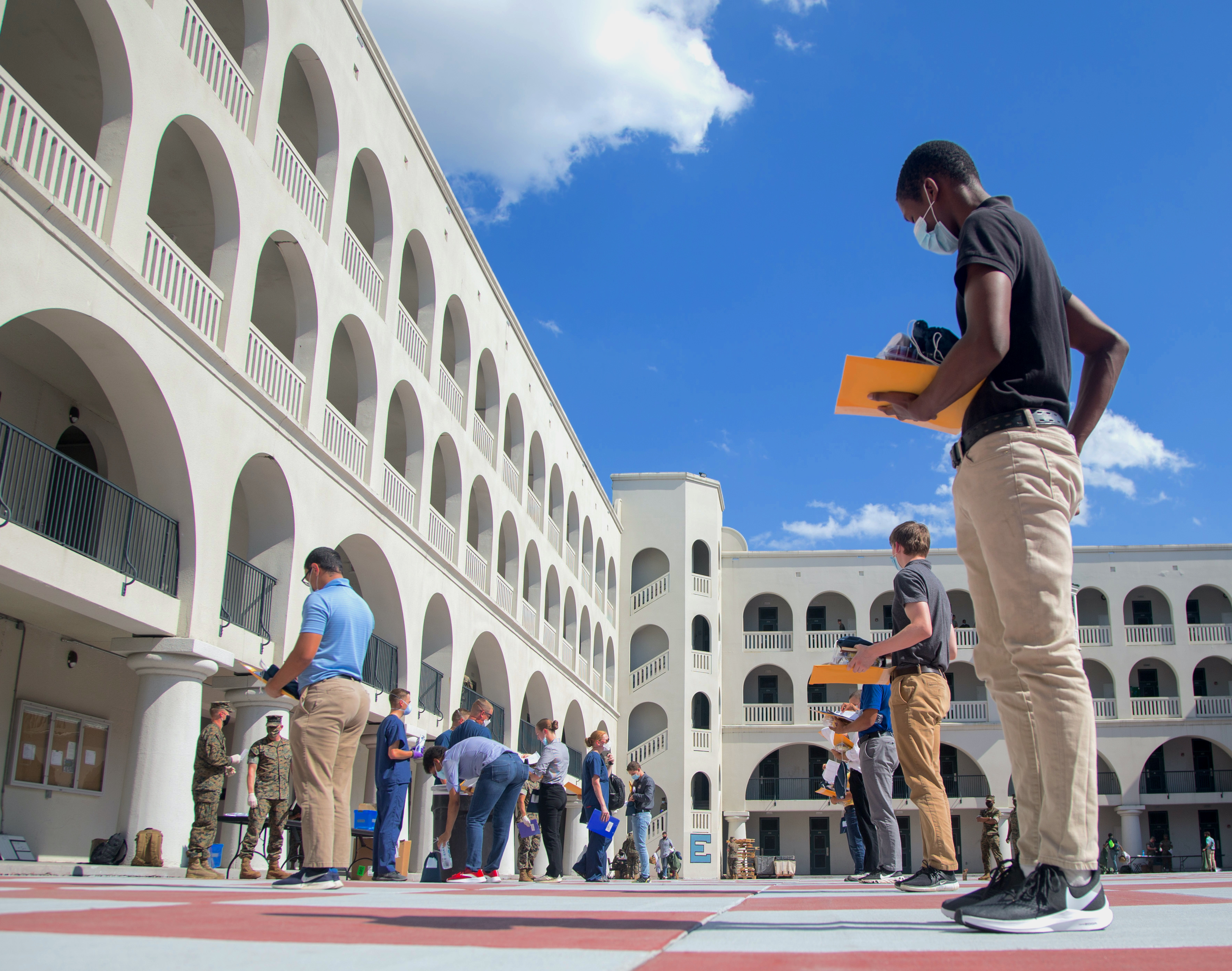 Poolees await medical screening at The Citadel, a public military college temporarily utilized to stage poolees for a 14-day observation period in Charleston, S.C., May 4, 2020. US Marine Corps

On the Marine Corps side, the service had seen positive COVID-19 cases in new recruits at boot camp on both coasts. Commandant of the Marine Corps Gen. David Berger said during the media call that both recruit training and officer candidate training had lowered the number of students in each class to help with distancing, and that everyone coming in for training had to go through a 14-day quarantine first.

Those quarantines are being aided by local partners such as, “like in South Carolina, from the Citadel, where they allowed us to lease a dormitory that was empty. So it allowed us to keep all the recruits separate before they began training, and then we’re testing all of them before they begin training,” Berger said.

He noted that the Marine Corps had an alternate recruit shipping model for about three weeks, alternating between sending recruits to San Diego, Calif., or Parris Island, S.C., but that they had resumed normal shipping now that more mitigation measures are in place at the boot camps. The throughput is still slightly lower than usual, he acknowledged, but he thought the Marine Corps would be able to end the year either on target or just slightly below target for producing new Marines.