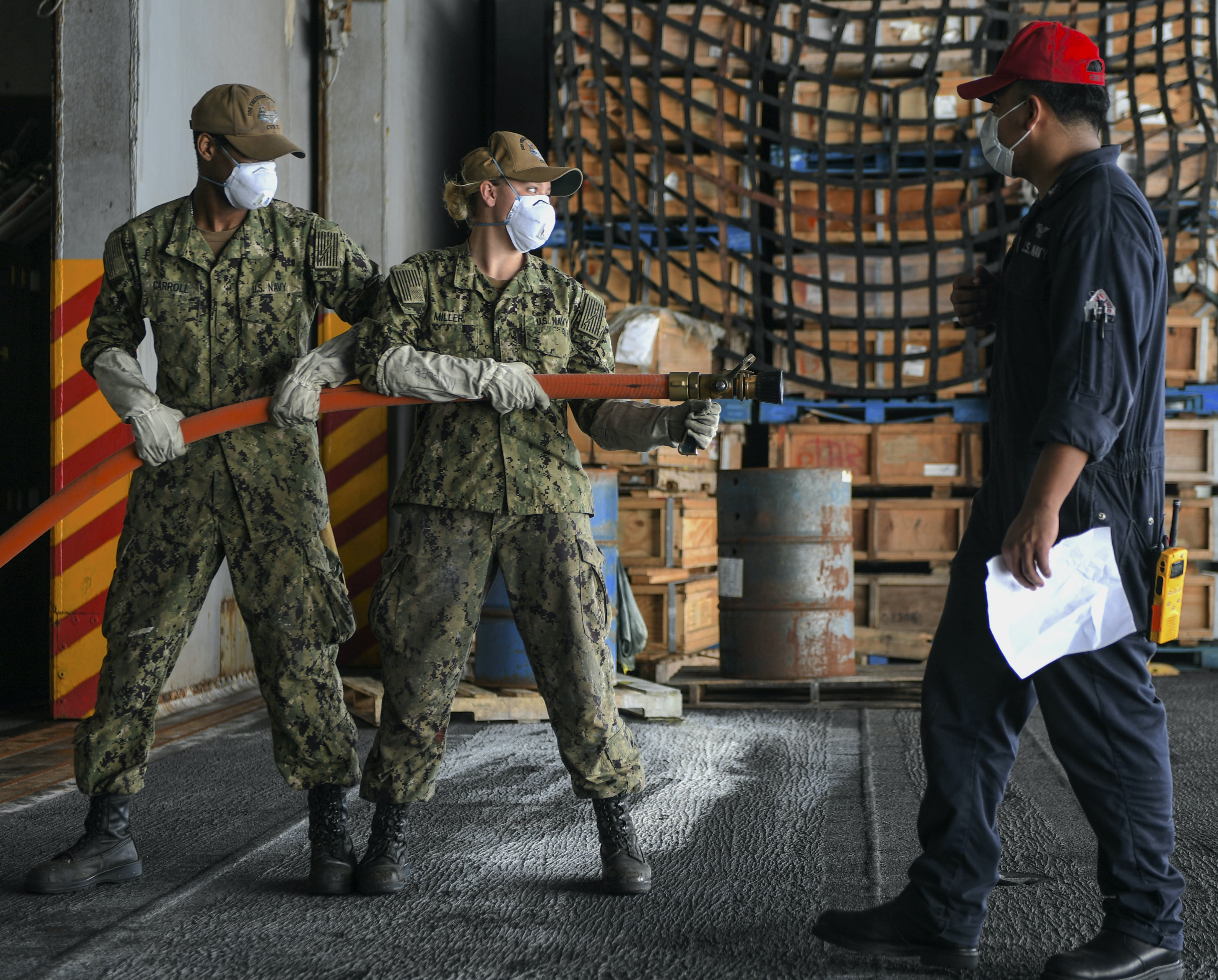 Sailors practice fire hose handling techniques in the hangar bay of the aircraft carrier USS Theodore Roosevelt (CVN-71) on May 8, 2020. US Navy Photo

The Pentagon is conducting an evaluation in how the Navy has developed procedures to keep COVID-19 off ships in parallel, but independent of, the service’s own investigation into the outbreak on the aircraft carrier USS Theodore Roosevelt (CVN-71), officials confirmed to USNI News on Wednesday.

According to a Monday letter, the Department of Defense Inspector General will be undertaking an evaluation of the Navy’s procedures.

“The objective of this evaluation is to determine whether the Navy has implemented policies and procedures to prevent and mitigate the spread of infectious diseases, such as coronavirus-disease-2019 (COVID-19), on ships and submarines,” read a Wednesday statement from a Pentagon spokesperson.
“In addition, we will determine whether mitigation measures that are effective in preventing the spread of COVID-19 were implemented across the fleet. We may revise the objective as the evaluation proceeds, and we will also consider suggestions from management for additional or revised objectives.

The study will keep inside the bounds of the operational fleet and not look beyond the service into individual combatant commands, the spokesperson said.

“We will perform the evaluation at relevant offices of the Office of the Chief of Naval Operations, U.S. Fleet Forces Command, and U.S. Pacific Fleet, read the copy of the letter.
“We may identify additional organizations during the evaluation.”

It’s unclear if the Army, Air Force or Marine Corps will undergo similar evaluations. A question left with a DOD IG spokesperson about whether the other services were being probed wasn’t immediately returned.

The new evaluation comes as the Navy is in the midst of looking into the circumstances around the outbreak aboard Theodore Roosevelt and the removal of its former commander Capt. Brett Crozier.

Chief of Naval Operations Adm. Mike Gilday tasked Vice CNO Adm. Robert Burke to conduct the new probe that, “will expand on the recently completed preliminary inquiry, provide more robust documentation of events, and give a fuller consideration of the circumstances surrounding the matter,” Cmdr. Nathan Christensen told USNI News earlier this month.
“The investigation is expected to be submitted to the CNO by May 27, unless an extension is granted. It will take additional time for the investigation’s recommendations to be reviewed and endorsed by Gilday.”

A spokesperson with DoD IG said the evaluation, “is unrelated to any investigations being conducted by the Navy.”

Additionally, a group of Democratic senators requested the Pentagon IG independently investigate the outbreak on Theodore Roosevelt. To date, the IG office won’t undertake a separate investigation into the incident on the carrier and removal of Crozier, according to a letter the DoD IG office sent to Senate Armed Services Committee ranking member Sen. Jack Reed (D-R.I.) and obtained by USNI News.

“Given this ongoing Navy investigation, the DoD OIG does not currently plan to initiate a separate investigation focused on Capt. Crozier’s dismissal,” read the letter.

Former Marine lawyer Robert Bracknell told USNI News on Wednesday that the response from the IG office was likely meant to stay out of the charged investigation into Crozier.

“DoD IG is deferring to Navy to get their house in order with regard to the Crozier relief, but they are looking over the Navy’s shoulder at the bigger response. The two issues are related in my view — the Crozier reaction was a micro issue in a macro Navy response to the virus,” he said.
“The TR situation will be one piece in a more complex puzzle — the Navy leadership was looking at a problem far bigger than one ship.”