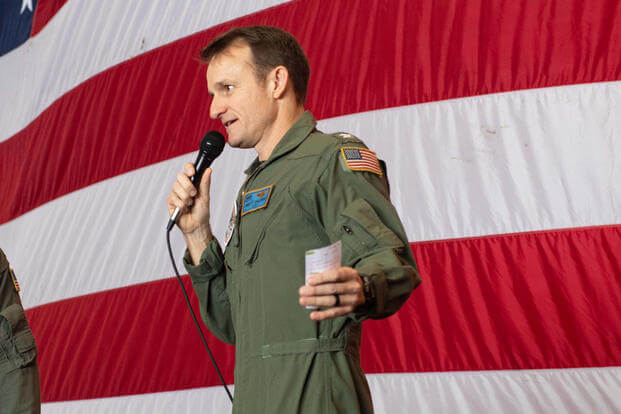 Capt. Brett Crozier, then-commanding officer of the aircraft carrier USS Theodore Roosevelt addresses the crew during an all-hands call in the ship’s hangar bay on March 3, 2020. US Navy Photo

The Navy’s number two will take the helm of an expanded investigation into the circumstances surrounding the March COVID-19 outbreak on USS Theodore Roosevelt (CVN-71), the service announced on Thursday.

Vice Chief of Naval Operations Adm. Robert Burke will lead a month-long command investigation into the circumstances surrounding the outbreak and the response of former Theodore Roosevelt commander Capt. Brett Crozier and his chain of command. A memo Crozier wrote to Pacific fleet leadership asking for more assistance in mitigating the outbreak on the carrier leaked to the press and ultimately resulted in his removal from command by then-acting Secretary of the Navy Thomas Modly.

“The command investigation will expand on the recently completed preliminary inquiry, provide more robust documentation of events, and give a fuller consideration of the circumstances surrounding the matter,” Cmdr. Nathan Christensen told USNI News in a Thursday statement.
“The investigation is expected to be submitted to the CNO by May 27, unless an extension is granted. It will take additional time for the investigation’s recommendations to be reviewed and endorsed by [Chief of Naval Operations Adm. Mike] Gilday.”

Given the timing, the results of the probe may not be made public until early to mid-June.

Burke’s preliminary investigation, undertaken by the Navy at the behest of Secretary of Defense Mark Esper, would, “consider command climate and circumstances surrounding the response, including communication throughout the administrative and operational chains of command,” Navy officials told USNI News at the time.

However, instead of releasing the investigation last Friday as initially planned, Esper moved the Navy to undertake a wider probe. Several defense officials told USNI News, Esper’s decision was prompted by lingering questions from Chairman of the Joint Chief of Staff Gen. Mark Milley who was briefed earlier last week.

A defense official told reporters the widened probe would be “to ensure that the inquiry was as thorough as it needs to be to answer any questions the secretary may have had before finalizing the report.”