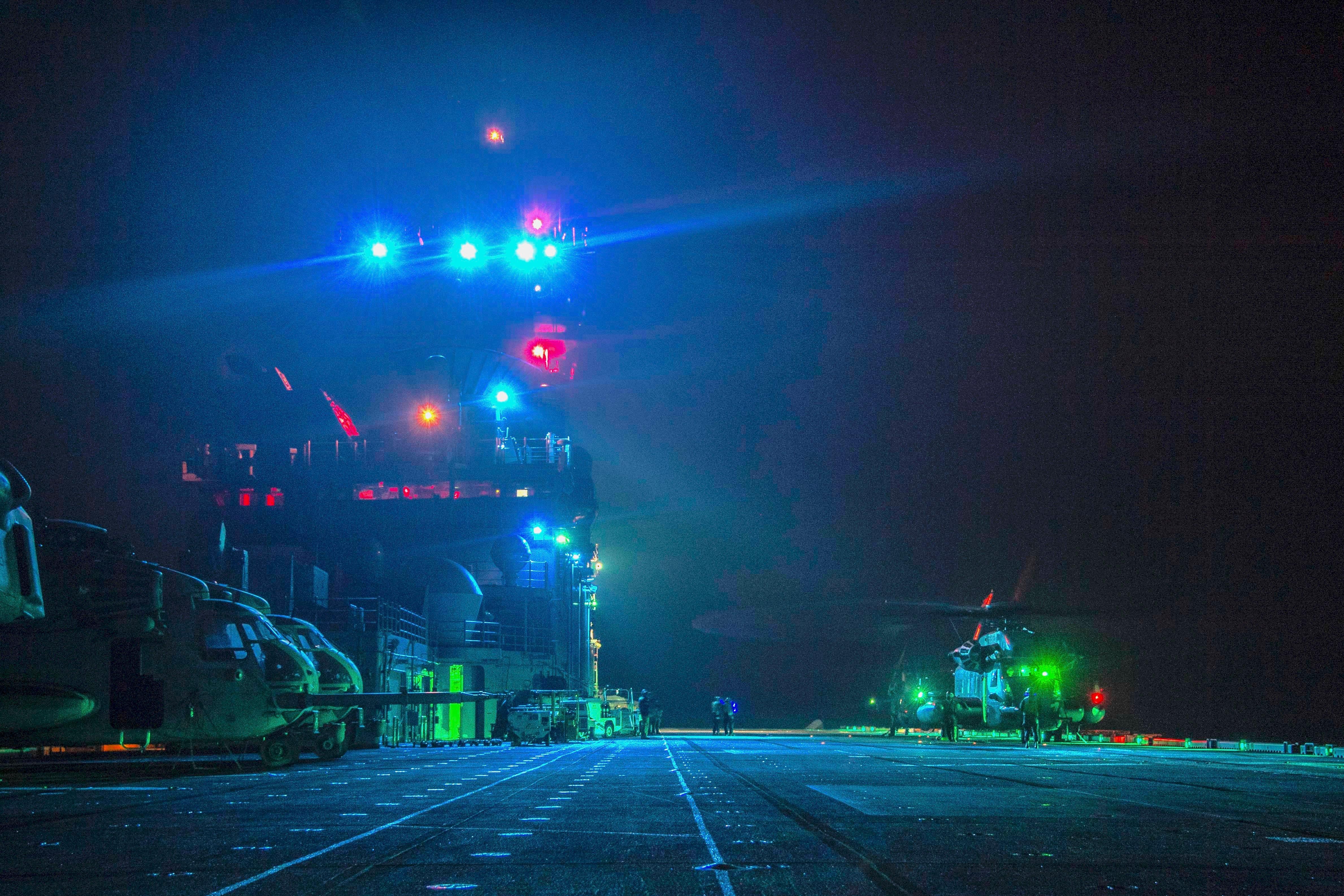 The U.S. Navy is continuing to run missions to ensure freedom of navigation and show presence in the Western Pacific while other militaries are scaling back their operations amid COVID-19 concerns.

A host of militaries in the region have called-off multi-nation exercises scheduled for this year and have claimed to scale back their military operations as a way of stopping the spread of COVID-19 through their ranks, according to several international navy officials.

However, during the past few weeks, the U.S. Navy employed a strategy of keeping its warships operating while crews take appropriate measures the Navy believes will safeguard them from coming into contact with COVID-19 or spreading the virus.

For example, Littoral Combat Ships USS Gabrielle Giffords (LCS-10) and USS Montgomery (LCS-8), which are both deployed to Singapore, have been limiting crew interactions with people on shore while in port and spending a significant amount of time at sea, Lt. Lauren Chatmas, a spokeswoman for Destroyer Squadron Seven (DESRON 7) in Singapore, told USNI News.

“Our ships are enforcing social distancing, minimizing group gatherings, wearing personal protective equipment and have been conducting deep-cleaning stations twice a day. Quarterdeck watchstanders are screening anyone who walks aboard and referring sailors with symptoms for medical evaluation,” Chatmas said.

Chatmas would not release a specific number of days the ships have been at sea, but both ships have recently been involved in recent operations intended to send a message to other nations in the Western Pacific.

Last week, the Navy sent Montgomery and replenishment ship USNS Cesar Chavez (T-AKE-14) to conduct a presence operation near Panamanian-flagged drillship West Capella. The Malaysian-state-owned Petronas hired West Capella to prospect in areas of the South China Sea claimed by both Malaysia and China, Greg Poling, a senior fellow for Southeast Asia and the director of the Asia Maritime Transparency Initiative at the Center for Strategic and International Studies (CSIS), told USNI News in an email.

Such movements by U.S. and allied navy ships in the South China Sea are typically followed with statements from Chinese government officials condemning the operations. After Bunker Hill and Parramatta sailed near West Cappella, Senior Colonel Wu Qian, the director general of the Information Office inside China’s Ministry of National Defense, issued a statement during a regularly scheduled media briefing.

“We pay close attention to and stay highly vigilant about the movements of the U.S. and Australian forces. For some time, some countries outside the region, such as the U.S. and Australia, have frequently carried out military activities in the South China Sea to strengthen their military presence in the region. This approach is not conducive to the security and stability in the South China Sea and we are firmly opposed to this. Facts have repeatedly proved that the U.S. is the biggest promoter of militarization in the South China Sea and a troublemaker for regional peace and stability,” he said, according to an official English language transcript of the briefing.

“This is in relation to a standoff between Malaysia and China that has been ongoing since December,” Poling said. “The West Capella has been contracted by Malaysia’s state-owned Petronas for exploratory drilling on an area of the continental shelf claimed by both Malaysia and Vietnam.”

China also claims vague historic rights, which are not recognized by international law, to all resources within the South China Sea. The result is for nearly six months, Chinese Coast Guard vessels have harassed West Capella and its supply ships, while Malaysian navy patrols have tried warning the Chinese ships to move on. Tensions ramped up in April, Poling said, when China deployed one of its state-owned survey ships “to illegally conduct its own oil and gas survey within Malaysian waters as a way of punishing Malaysia.” 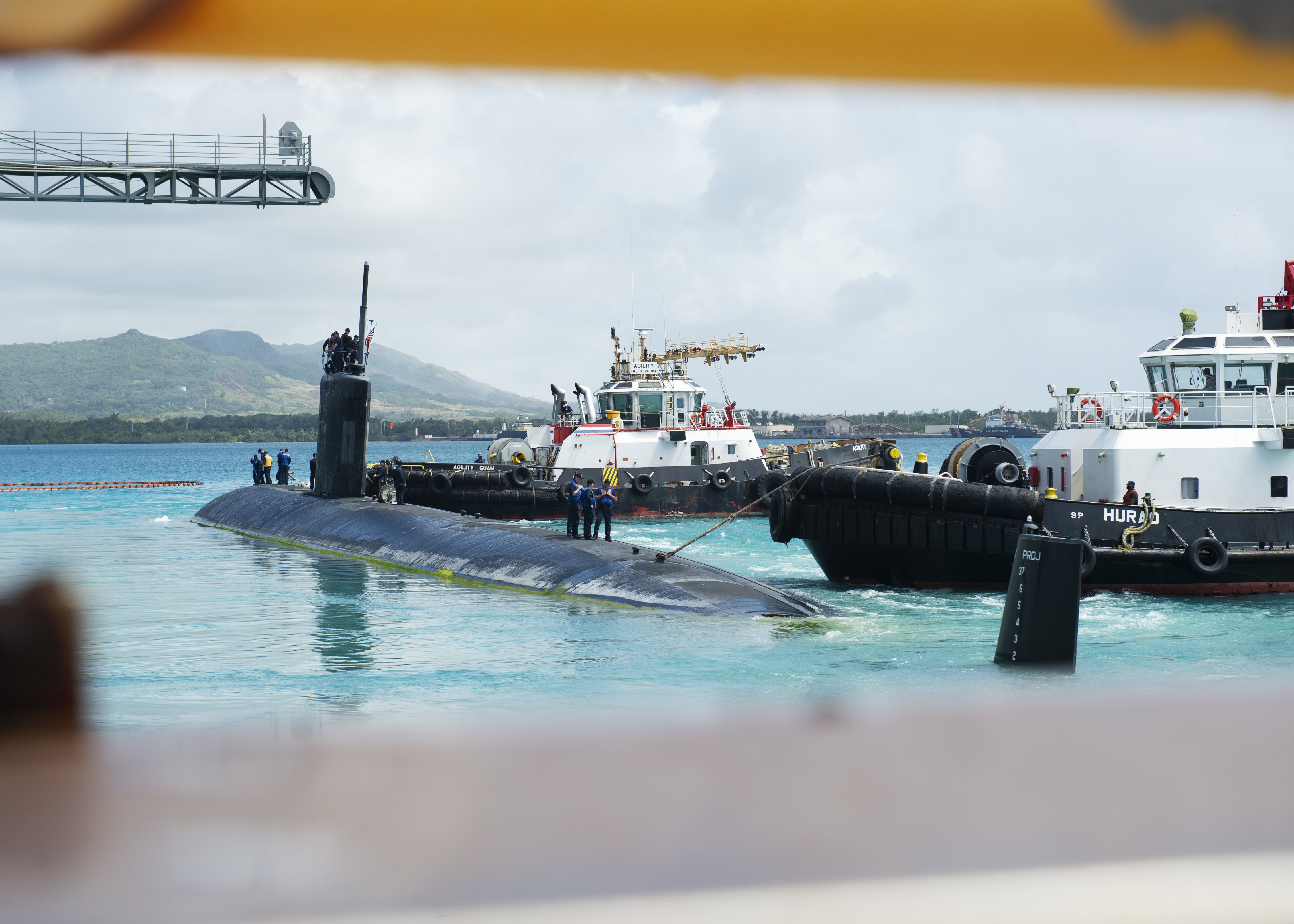 Los Angeles-class fast-attack submarine USS Alexandria (SSN-757) prepares to depart Apra Harbor as part of scheduled operations in the Indo-Pacific on MAy 5, 2020. US Navy Photo

“A key element to our collective success is our ability to employ undersea warfare capabilities in support of multiple missions,” Rear Adm. Jimmy Pitts, the commander of Submarine Group Seven, said in a statement.
“This is a Navy-wide effort, and as this exercise demonstrates, every 7th Fleet Task Force is fully invested in testing and improving our cross-community coordination. The seamless, unified operations between our warfare communities demonstrate a strength and professionalism that is only possible because of our routine training and engagement.”

At the same time, several key military exercises in the region were canceled or indefinitely postponed because of COVID-19 concerns and travel restrictions placed on military personnel.

The Washington State National Guard was sent home early from the bilateral Malaysian-U.S. staff exercise Bersama Warrior in the Malaysian capital of Kuala Lumpur. The exercise started on March 6, but U.S. personnel returned to the U.S. before Malaysia closed the country down on March 18 because of COVID-19 concerns. The exercises were to last until March 20.

The Philippines postponed indefinitely the 2020 Western Pacific Naval Symposium and an accompanying International Fleet Review scheduled to be held in Manila from May 18 to May 22. During this event, the 21 member nations would be represented by their naval chiefs, along with observers from eight countries.

Australia canceled the Pitch Black 2020 air exercise scheduled to be held between July 24 and August 14 in Australia’s Northern Territory. The event would have included about 3,500 personnel and up to 120 aircraft from Australia, Canada, France, Germany, Indonesia, New Zealand, Singapore, Thailand, Malaysia, Republic of Korea, United States and Japan, which was making its debut at the exercise.

The U.S. Marine Corps Forces Pacific, though, received an exemption from the Australian government to resume deploying to Australia.

As for the annual Cooperation Afloat Readiness and Training (CARAT) exercise series and Pacific Partnership humanitarian assistance and disaster relief series, the Navy is still evaluating the risks and considering postponing or scaling back the exercises, Lt. Cmdr. Sean Riorden, a Navy spokesperson, told USNI news.

“The Navy is taking proactive measures to limit the spread of COVID-19 and care for our personnel while remaining committed to doing the work of ensuring security for our friends, partners and allies,” Riorden said. “For events like CARAT 2020 and Pacific Partnership, that may mean postponing until a time when we can conduct meaningful exercises with minimum risk. We continue to evaluate the situation and work with partners and allies to make the best decisions possible.”