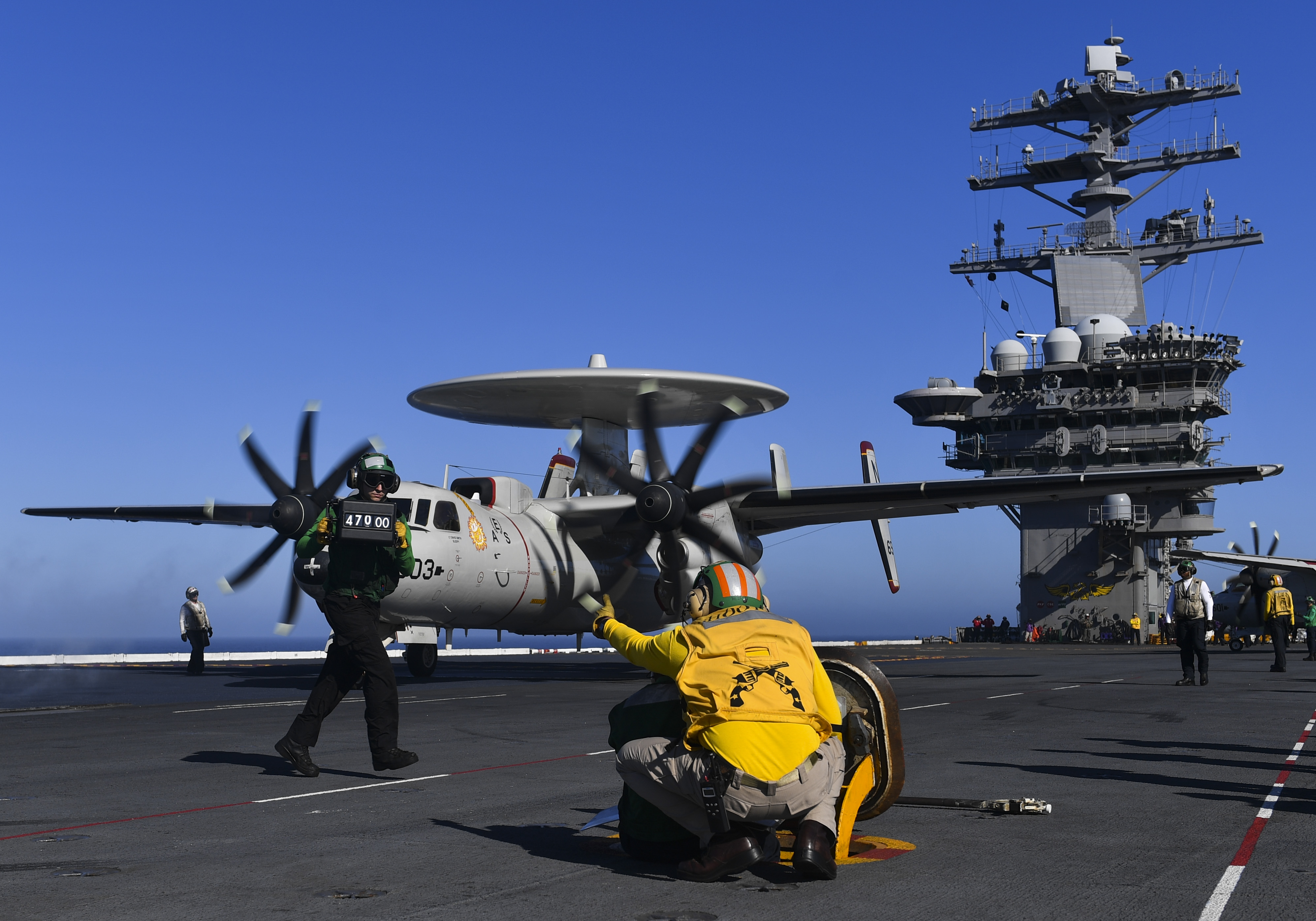 An E-2C Hawkeye from the Sun Kings of Carrier Airborne Early Warning Squadron (VAW) 116 prepares to launch from the flight deck of the aircraft carrier USS Nimitz (CVN-68) as part of a composite training unit exercise (COMPTUEX) in May 6, 2020. US Navy Photo

The graduation exercise for the carrier strike group will be the first major test of the Navy’s methodology to prevent COVID-19 outbreaks on its deployed ships.

The crew of Nimitz started an isolation period in early April, in line with Centers for Disease Control and Prevention (CDC) guidelines. The Navy screened all crew for COVID-19 before boarding the ship and kept them within the skin of the ship until they departed the ship’s homeport of Bremerton, Wash., on April 27.

The service had secured enough COVID-19 test kits to evaluate the nearly 8,000 sailors of the Nimitz Carrier Strike Group. Navy officials previously told USNI News they planned test crew members before deploying. Carrier Air Wing 17, the command staff of Carrier Strike Group 11 and crews of the planned carrier escorts have been isolated in California ahead of the strike group assembling in San Diego.

While the Navy wouldn’t discuss future operations, it’s likely the strike group will start their deployment at the conclusion of the training exercise without returning to port. Once underway, the deployment will feature few port visits and additional restrictions.

For example, the Navy is limiting how it will use its C-2A Greyhound carrier onboard delivery (COD) detachment, Vice Adm. Phillip Sawyer, deputy chief of naval operations for operations, plans and strategy (OPNAV N3/N5), told USNI News earlier this week. 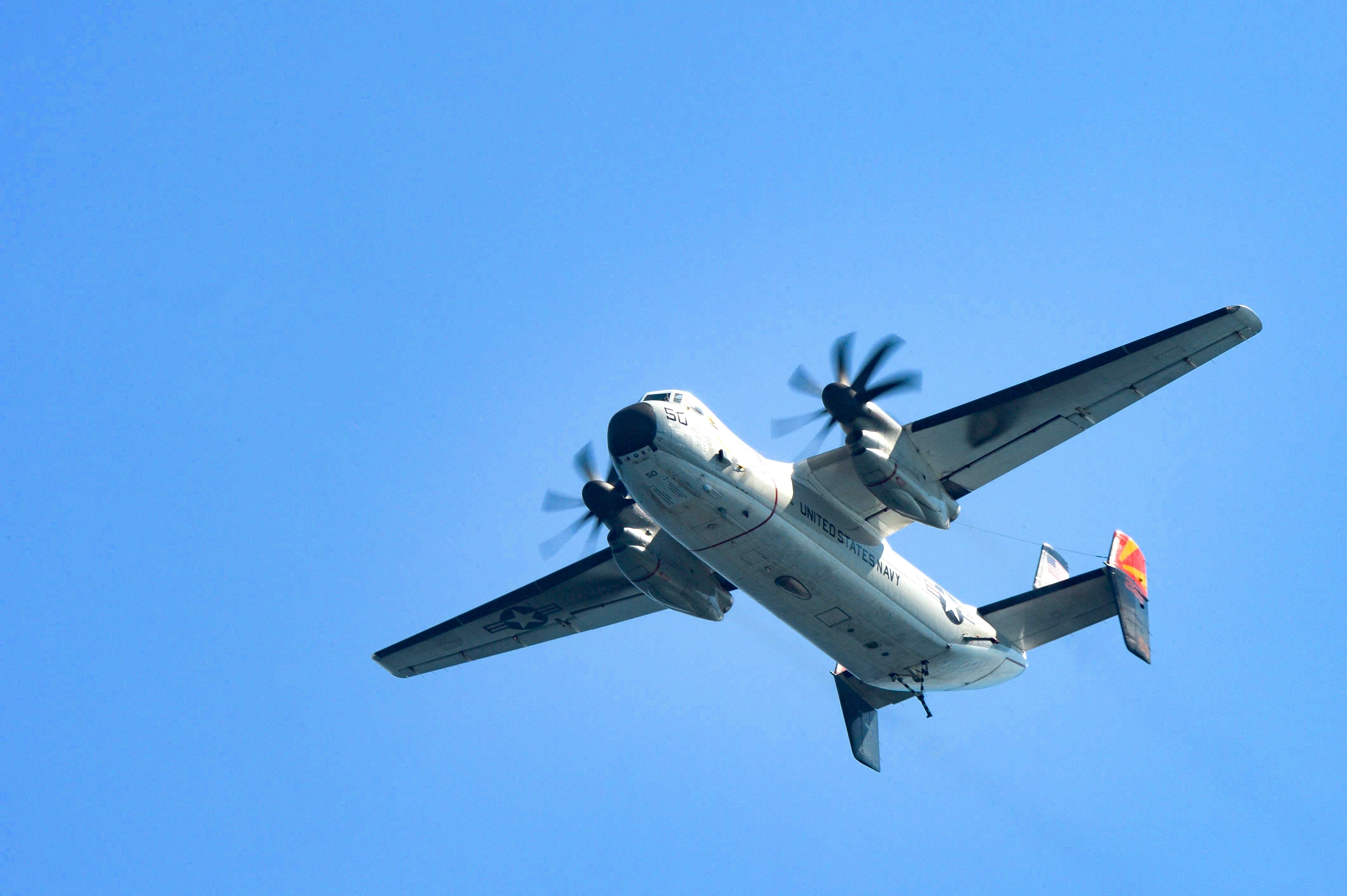 A C-2A Greyhound, attached to the ‘Rawhides’ of Fleet Logistics Support Squadron (VRC) 40, flies over the aircraft carrier USS Harry S. Truman (CVN-75) in the Arabian Sea on Feb. 7, 2020. US Navy Photo

The C-2s typically set up near major airports on shore and ferry mail and equipment to the carriers, moving to new locations as the carrier moves throughout its deployment. But to limit crew exposure, the planes will spend more time on the carrier.

“If the flight crew detachment is staying ashore for any period of time, they are restricted from movement from plane to wherever they’re staying,” Sawyer said.
“We’re working toward keeping them aboard the ship. So far, far fewer COD flights. We’ve been able to do this very successfully in 5th fleet. They’ve given us a pretty good model to minimize those vectors into the bubble and we’re replicating that across the force.”

Meanwhile, across the Pacific, the crew of USS Ronald Reagan (CVN-76) underwent a similar isolation period before departing their homeport of Yokosuka on Monday, according to the Navy.

The Navy started sending ships on deployment straight from COMPTUEX instead of bringing them back to port after USS Theodore Roosevelt (CVN-71) was sidelined in Guam because of a COVID-19 outbreak. The carrier has been idled for more than a month and ultimately reported having more than 1,000 crew who tested positive for COVID-19. The Navy had to temporarily isolate a majority of the crew off the ship, on base and in hotel rooms around Guam.