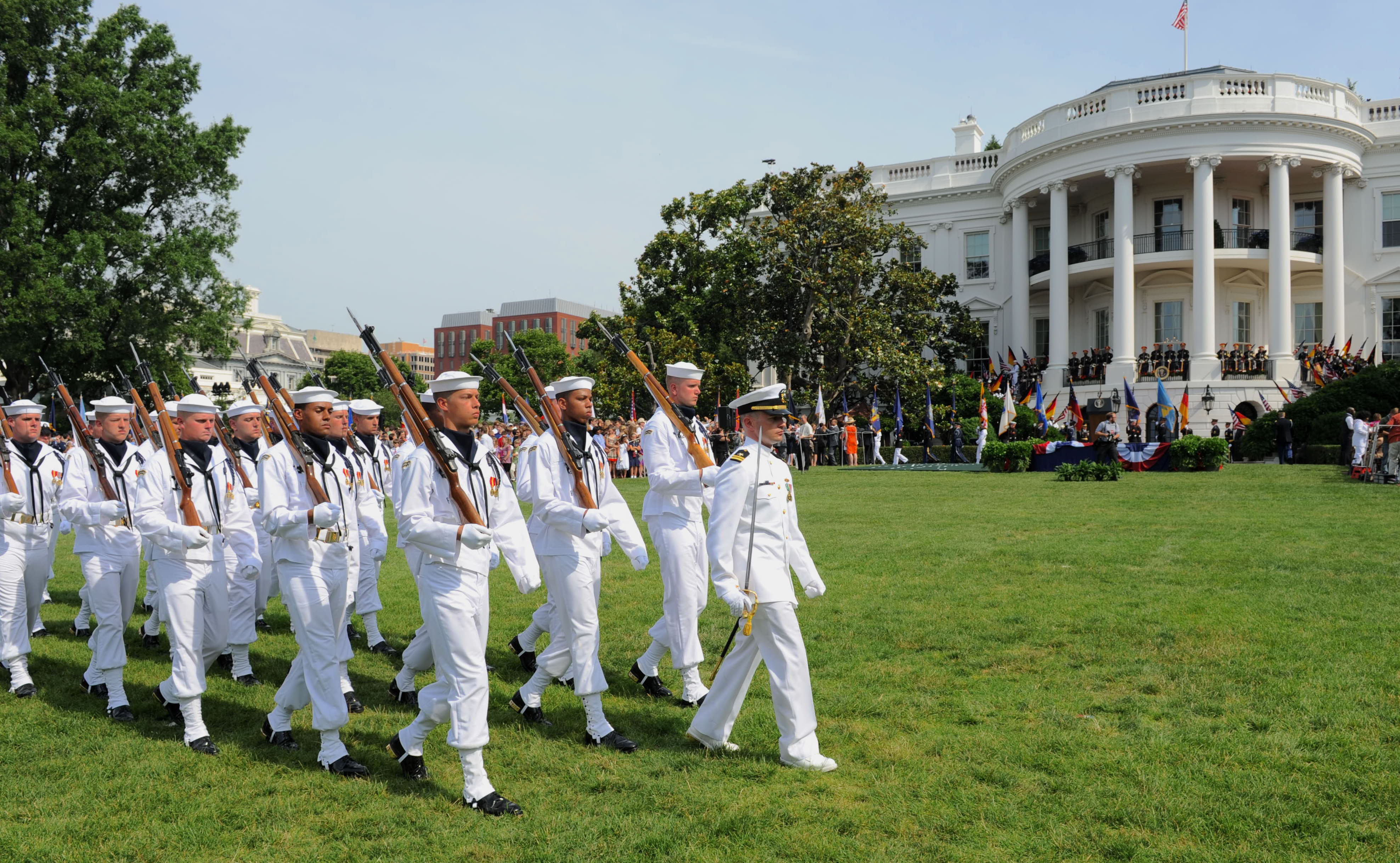 U.S. Navy ceremonial guard march off the South Lawn of the White House in 2011. US Navy Photo

One sailor on the White House Military Office staff tested positive for COVID-19 this week, calling into question the possible exposure of the first family, West Wing staff and others to the military unit that tends to many of the daily needs of the White House.

CNN first reported today that a male sailor on the staff began showing symptoms on Wednesday and tested positive for COVID-19 through a rapid testing system set up at the White House. The news channel also reported that – in addition to President Donald Trump not wearing a mask in briefings, when greeting officials at the White House and during his trip to Arizona this week – aides and West Wing staff were also not wearing masks around the president while at work. Rather, they were relying on regular COVID-19 tests and temperature checks each day to prevent an outbreak among the staff.

The White House Military Office is responsible for some of the most intimate tasks at the White House, including food service, transportation, medical support and emergency medical services, and hospitality services. The office also runs the Camp David retreat site in Frederick County, Md., where the president and advisors spent last weekend.

Given the lack of personal protective equipment being worn by White House staff, it is unclear just how many people could have been exposed. The Centers for Disease Control and Prevention (CDC) has warned that COVID-positive patients can spread the disease for days before they have enough of the virus in their system to test positive.

The Navy referred all questions on the matter to the White House. The White House press office did not return a USNI News query regarding COVID prevention steps being taken among the WHMO staff, how many staff may have been exposed, and if anyone is being quarantined beyond the one sailor who tested positive.

Trump told reporters on Thursday afternoon that he knew who the sick sailor was but that he and Vice President Mike Pence had not been in close contact with him.

Some elements of the WHMO are quite visible – the Air Force One plane and Marine One helicopter to move the president securely around the country, and military guards often seen at doors during presidential receptions and events shown on television.

But the military presence at the White House goes much deeper.

According to a 1974 Comptroller General letter, naval personnel have had a permanent presence at the White House since 1880, when Rutherford Hayes received the first presidential yacht. Additionally, Franklin Roosevelt turned Naval Support Facility Thurmont in Maryland into his Shangri-La mountain retreat, with Dwight D. Eisenhower later renaming it Camp David. The Navy has retained primary responsibility for the mountain campus’s operations.