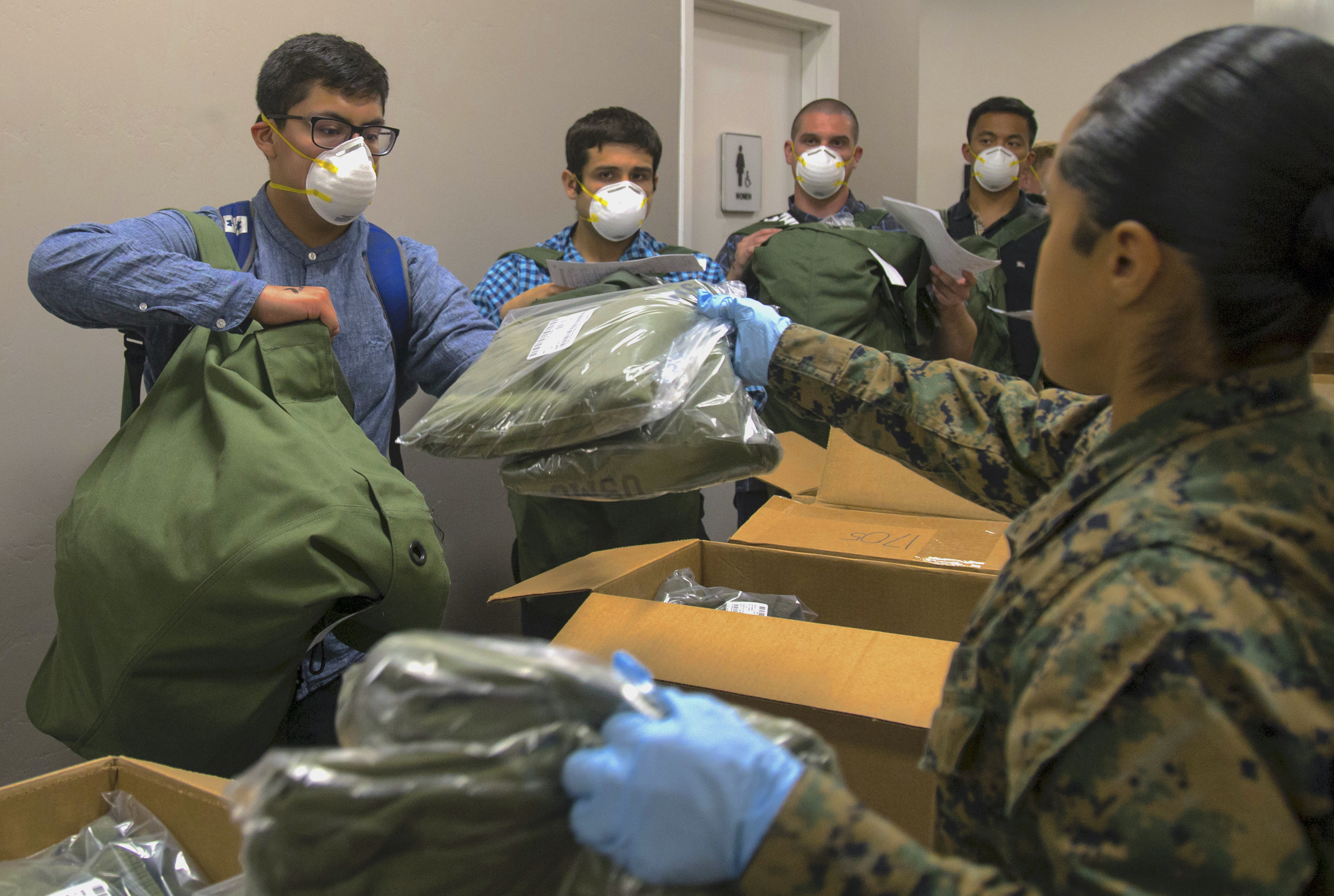 Nearly four dozen recruits with Bravo Company, 1st Recruit Training Battalion, tested positive for COVID-19. However, none of those recruits has yet exhibited any symptoms of the disease, a recruit depot spokesman told USNI News.

“All of the new positives were asymptomatic. Not sick, just symptoms,” Capt. Martin Harris said Wednesday. Symptoms of the COVID-19 infection include dry cough and trouble breathing, and other flu-like symptoms including fatigue, fever and pain have been reported, according to the Centers for Disease Control and Prevention. Symptoms can appear from two to 14 days after exposure to the virus, which can be deadly.

The recruits have been quarantined, housed in barracks at the depot where they share two-man rooms with a bathroom, and those who tested positive are being isolated in single rooms.

The entire Bravo Company has been tested. About 200 men had arrived at the recruit depot in late March and reported to Bravo to begin training.

“They had come in and they had gone through something of a light quarantine,” Harris said.

“About five days in is when they had their first positive, which was based on symptoms,” he said, and training officials “did a quick contact study” and came up with a plan to quarantine the recruits. “It was one platoon that initially got the test,” he added.

The influx of additional COVID-19 test kits enabled the rest of Bravo Company to be tested. Depot officials were awaiting results of the tests of the rest of Bravo’s recruits, Harris said Wednesday afternoon. “We assume there will be more” positive cases showing infection, just based on the first platoon’s results.

Those results will dictate when Bravo Company will resume the regular recruit training syllabus. Depot officials are consulting with Navy and Defense Department medical officials to chart out a return to training, Harris said. In the meantime, Bravo Company recruits will remain in isolation “for the prescribed amount of time. But we’re not 100 percent sure what that’s going to look like yet,” he said.

COVID-19 test results will determine when Echo and India can start the training syllabus. While Echo is nearing the end of their quarantine period, “they are not starting training until they get the results,” Harris said.

The positive cases of coronavirus are the first affecting recruits at the San Diego depot. A handful of staff and training personnel have tested positive and put in isolation so far, but “we haven’t had anyone go to the hospital or need medical care,” Harris said.

Depot officials haven’t yet determined when the Bravo Company recruits will resume training. “This situation is complex. They’ve clearly been in quarantine for 14 days, in two-man rooms, so it just depends really on the recommendation of the medical personnel,” Harris said. “If they are asymptomatic and test positive, do they have to wait a certain amount of time?”

For now, while in quarantine, the recruits are keeping to something of a strict, modified schedule, albeit not as rigorous as they endure during official recruit training. “We are finding creative ways to keep them engaged, but still moving them through the training so they’re not missing out on anything,” Harris said. “Things are going to be flexible.”

Training officials recorded classroom instruction, which recruits can view on televisions in each of their two-man rooms. Bravo’s recruits get one hour of calisthenics daily and have physical training cards to assist. “There is interaction with the drill instructors, but for the most part, they are being guided by everybody else,” he said, adding, “they’re on a pretty tight routine.

“Obviously, it’s a looser structure right now, but they are going to get back to it.”

Hot meals are delivered to their room, as well as linen and laundry service. Recruits get medical and chapel visits daily, and “ the families have been able to contact the recruits during this time.”

“At the end of January, beginning of February, we started planning for what is it going to look like if we have to stop and feed and take care of people with the virus,” he said. They weighed different scenarios and impacts if the virus affected a handful of recruits and personnel or a lot, and if it were isolated to one training company or spread across several at the depot. “So there’s been a whole lot of planning and input going into this,” he added.

The recent deliveries of testing supplies and dedicated access to medical personnel, including at San Diego Naval Medical Center, has helped the recruit depot do more proactive testing of recruits, Harris said. “The health care staff that works here has just been working above and beyond… to give us the ability to be active and be actively screening for people who are asymptomatic,” he said. “We’re going after it.”

It’s a all-hands-on-deck effort, such as assistance from depot dental personnel helping conduct the screenings. More help is inbound with support from I Marine Expeditionary Force, based at nearby Camp Pendleton, “with personnel to help with dealing with the daily needs of taking care of people,” to include the possibility of additional facilities if needed to support quarantines, Harris added.