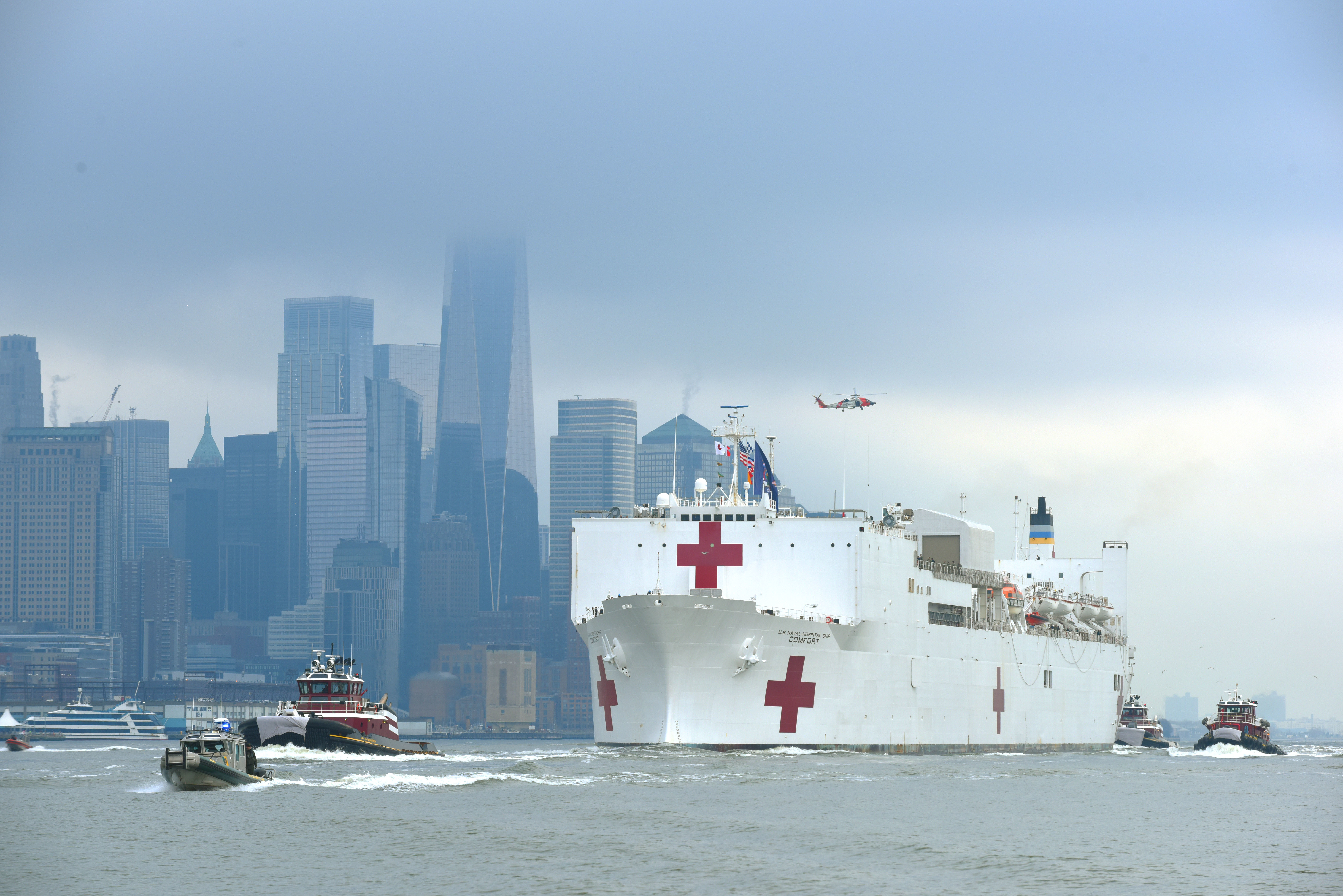 “We received our first patients last night and are ready to receive many more,” Capt. Patrick Amersbach, who commands the Medical Treatment Facility aboard Comfort, said during a Pentagon press briefing today.

Medical teams are prepared to treat non-COVID-19 patients transferred from area hospitals, said Amersbach, speaking by phone from the ship. “We are honestly looking forward to seeing a significant increase in patients being transferred to Comfort today,” he said.

Comfort is one of the Navy’s two 1,000-bed hospital ships that were activated and deployed in the past week to support the federally led regional missions in New York and Los Angeles. The ships will receive and treat patients who were screened and tested and found negative for the potentially deadly virus.

The ship arrived March 30 at Pier 90, a cruise ship terminal in Manhattan, after leaving Norfolk, Va., just two days prior. Comfort’s orders to New York City are to offset the patient load at area hospitals as they expect to be besieged by patients infected with the virus. The ship was undergoing maintenance when it received the short-notice mission.

The ship is receiving patients transferred to the ship from other hospitals, a process that’s managed by a FEMA-led, multi-agency coordination center set up at the Jacob Javits Convention Center. That’s “to make sure that the patients coming aboard the ship are suitable for our environment, as well as – right now – COVID-19 free,” Amersbach said. 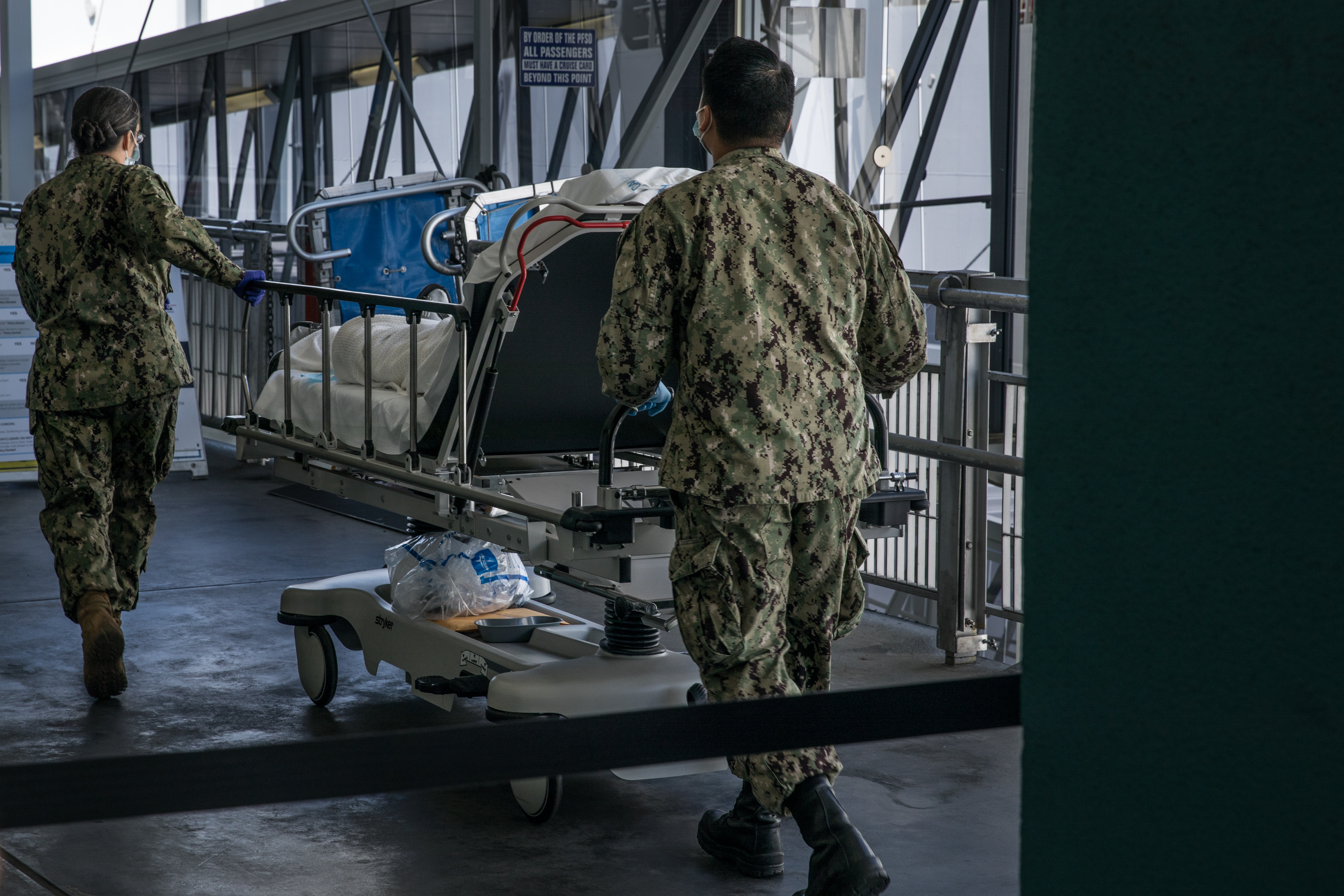 On the West Coast, Comfort’s sister ship, USNS Mercy (T-AH-19), had received 15 patients since Sunday, two days after arriving at a cruise ship terminal in the Port of Los Angeles. As of April 2, 10 of those patients remained, and five patients had been released from the ship, Capt. John Rotruck, the MTF commander aboard Mercy, said during the Pentagon press briefing.

The patients brought to Mercy were receiving a range of medical care for issues including gunshot wounds; accident injuries; or gastrointestinal, heart and lung problems, Rotruck said. They include some post-surgery patients, although no surgeries had been done aboard the ship, he said.

“Pretty much the gamut of patients you’d expect to see in a community hospital,” Rotruck said.

As of Thursday morning, both ships had received just a trickle of patients. Rotruck said the decision made by senior DoD officials was to get the hospital ships in place “early, before the local hospitals were overwhelmed, so we could establish the relationships and ensure the processes were sound to get patients to the ship, so when the capacity and demand increases, we’ll be ready.”

“If that demand signal ramps up, we’ll certainly be ready to accommodate that,” he added. Amersbach noted Comfort was brought in quickly to take in COVID-19-free patients from New York City-area hospitals “before the wave hits, or as quickly as we possibly can.”

Mercy is receiving patients transferred by the Medical Alert Center, a Los Angeles County-run multi-agency facility that coordinates all hospital transfers in the region. Still, word of the ship’s arrival had prompted several people to call the ship inquiring about getting treated aboard.

“We’ve had a few phone calls,” Rotruck said. “We answer those calls as appropriate and let people know the mechanism for receiving care on the Mercy comes from being a patient at a local hospital first.”

Medical teams aboard the hospital ships can treat a wide range of health issues but do not provide any pediatric or obstetric care. “We have not been directed to expand the scope,” Rotruck said, when asked whether Mercy could receive and treat expectant mothers concerned about possible virus exposures at local hospitals. Though that order hasn’t come yet, he added that they could expand their work scope if told to.

With the focus on providing a COVID-19-free environment, both ships are limiting access aboard. All MTF personnel, as well as the ships’ crews, were screened for the virus. The 14-day restriction-of-movement rules imposed by the DoD also limits those aboard to potential exposure outside of the ships.

“We have a lot of measures in place to ensure we remain a COVID-free ship,” said Rotruck, noting that includes screening everyone before they boarded the ship. Prevention measures, including frequent cleaning of surfaces, hand-washing and use of hand sanitizers as per CDC recommendations, remain in effect.

“We currently have enough (personal protective equipment) in stores aboard to take care of patients here in New York City for… at least the next few weeks, depending on how many patients we get aboard the ship, and then we have a very robust logistics system in which to get resupplied while we are pier side,” Amersbach said. “The Defense Logistics Agency is working diligently with us to ensure that we have what we need.”