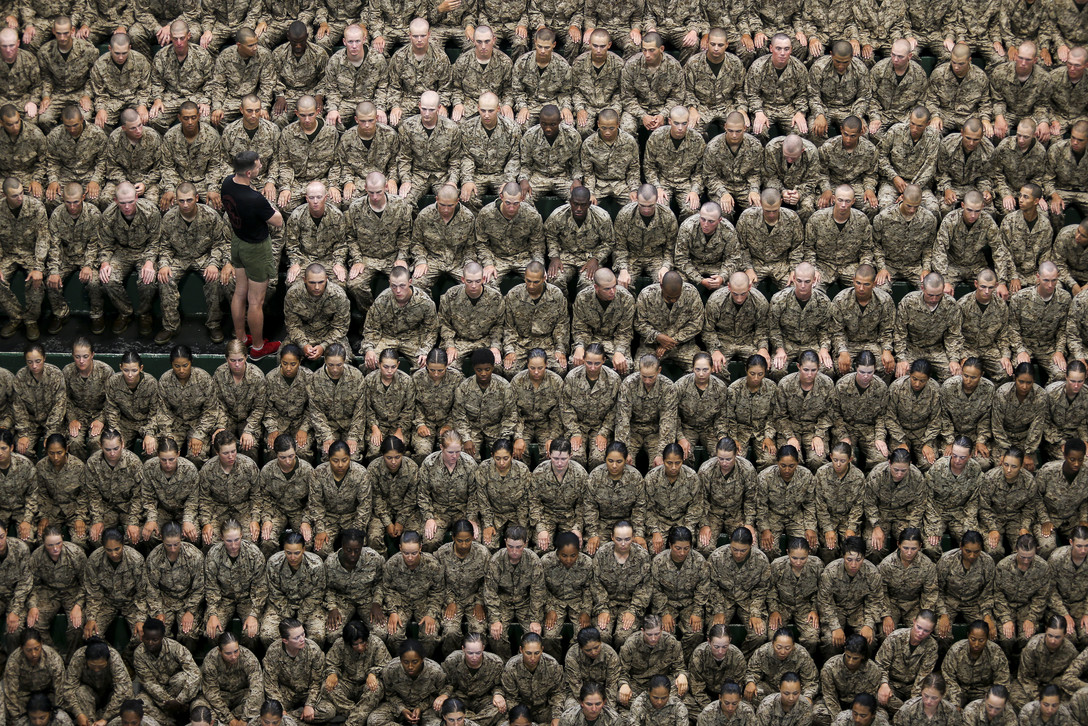 The Marine Corps will temporarily suspend shipping new recruits to Marine Corps Recruit Depot Parris Island in South Carolina, after a handful of cases of the COVID-19 virus have been diagnosed at the installation.

“The preservation of our Marines, recruits and their families is the highest priority for Marine Corps Recruiting during this national emergency,” Commandant of the Marine Corps Gen. David Berger said in a news release.
“With that in mind, we’ve paused this week’s shipping of new recruits to Parris Island and will revise our overall shipping plan to ensure we are able to meet the Nation’s needs while protecting its next generation of Marines.”

Recruit training for individuals already at Parris Island will continue as planned, with continued emphasis on personal and environmental cleanliness and social distancing, according to the news release.

Last week Berger and Acting Secretary of the Navy Thomas Modly announced there had already been a handful of positive diagnoses for the virus at Parris Island. As of the March 26 morning briefing, two recruits had tested positive, and two Marines who worked in spaces separate from the training activities had also tested positive. Today, The Washington Post reported that number had increased to at least 20.

Modly said at that briefing that, “effective immediately, naval recruiters will temporarily transition to prospecting via digital and telephone means only. Marine recruiters will not be meeting in person with prospects or with applicants. Both Marine Corps recruit depots have implemented formal screening measures to identify possible cases of COVID-19 in recruits upon their arrival to the depot, as well as prior to traveling to the depot during their in-processing at the military entrance processing stations; we call those MEPS. Those who present any symptoms receive follow-on assessment to protect the health of our communities and sustain force health and generation.”

Berger said at the briefing that, whereas recruits typically get time off after boot camp and before heading on to their next training destination, instead they’ll have that time at the beginning of their boot camp experience to remain in quarantine and monitor for any symptoms.

“Those who are going through the military entrance processing center and then onto Parris Island or San Diego, they’re being isolated for a period of time to have a good look at them, to observe them before training starts, where normally they would have that period after boot camp,” he said.
“We’ve just moved that to the front end.”

In San Diego, the recruit depot is still receiving and training new Marines but at a somewhat decreased capacity, a spokesman told USNI News.

“MCRD San Diego is receiving recruits this week, though it is a decreased number to ensure that there is enough space to provide social distancing and adequate staff to safely screen and evaluate incoming recruits. This is a dynamic situation that continues to evolve. The Marine Corps is taking careful, deliberate steps at all levels to mitigate risk to all involved while continuing to fulfill our critical role in the defense of the Nation. On a case by case basis, shipping plans may be adjusted or reduced based on Recruit Depot capacity, safeguarding the force, or the need to maintain isolation and distancing. If we encounter challenges with shipping due to COVID impacts, discretion will be applied to existing and future plans. Within our existing authorities, we can adjust shipping plans to meet the needs of the Nation,” MCRD San Diego spokesman Capt. Martin Harris said.
“Obviously, there will be more to follow in the come days and weeks.”

On the Navy side, a recruit at Recruit Training Command Great Lakes in Illinois tested positive for the virus and is isolated at a federal hospital outside Chicago, the Navy announced on Sunday. On March 26, the command also began a 14-day isolation period for recruits ahead of the start of training to prevent the spread of the virus at Great Lakes.

The commandant noted during the press briefing that, for the Marine Corps, recruits are still getting their heads shaved for now, even though that calls for closer contact than recommended under social distancing guidelines of keeping six feet away from other people. Other close-up activities like martial arts training, too, will continue for the time being.

“But there will come that time if it gets worse and worse and worse where barbers won’t come to work. In that case, you know, we’ll have to make a decision: Do Marines cut Marines’ hair? Do we make adjustments? The commanders at both of our recruit depots have thought their way through it.”

Berger has placed his trust in local commanders to make the best decisions for their units to balance readiness – with the Marine Corps being the fight-tonight force that could be called on at any time – with health and safety. This is likely why today’s announcement applies to the East Coast recruit depot but not the West Coast depot in San Diego, Calif.

The Marine Corps news release adds that poolees should keep in close contact with their Marine recruiters to make sure they understand any changes to their planned ship dates and that those interested in joining the Marine Corps should still begin the process of applying online and by telephone.