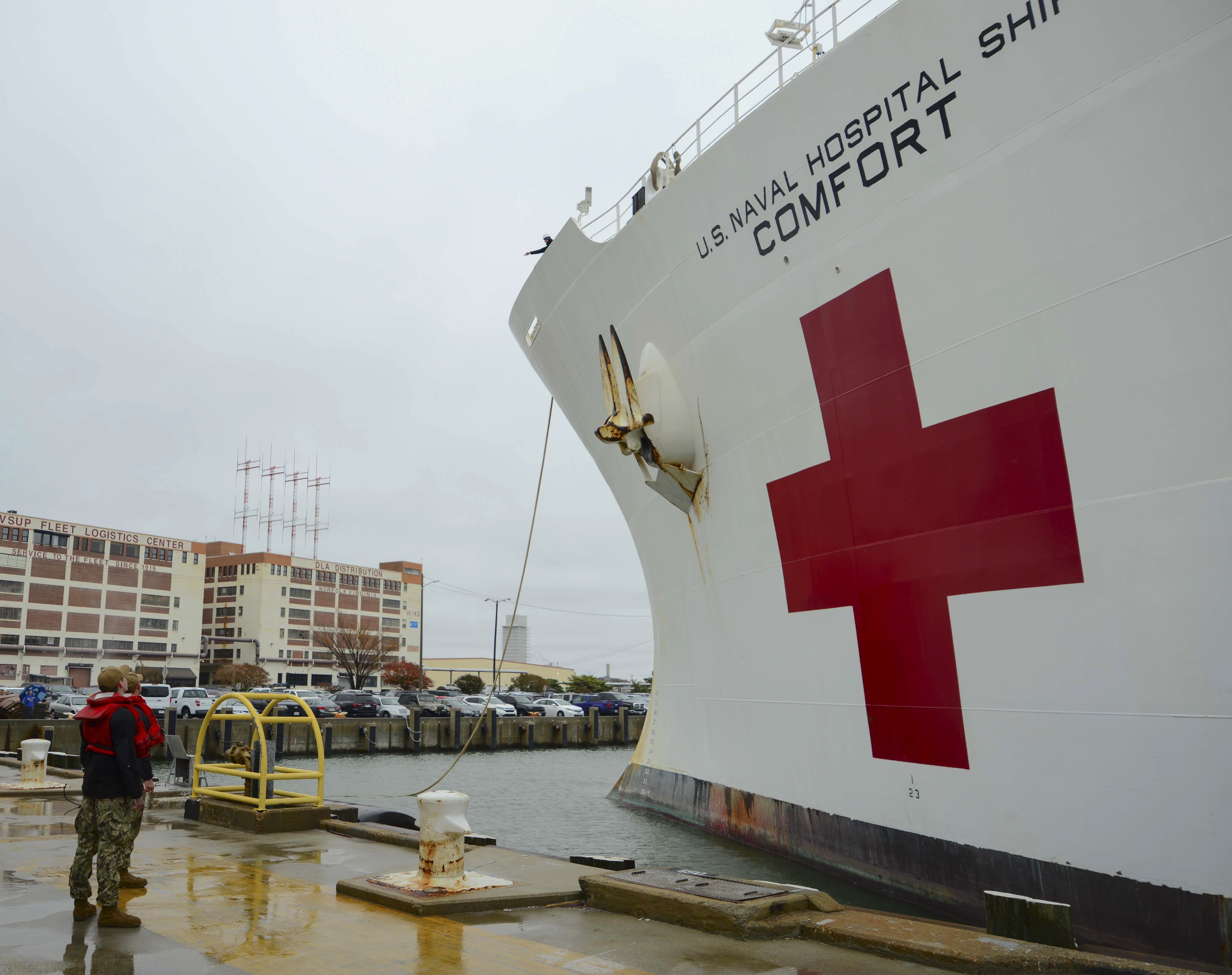 This post has been updated to include information from a press briefing by Acting Secretary of the Navy Thomas Modly and Chief of Naval Operations Adm. Mike Gilday.

THE PENTAGON – Hospital ship USNS Comfort (T-AH-20) will ship out to New York City in less than 14 days, Secretary of Defense Mark Esper said on Tuesday.

Speaking at the Pentagon, Esper highlighted the Department of Defense effort to aid with the domestic COVID-19 virus response, including the Monday departure of hospital ship USNS Mercy (T-AH-19) from Naval Station San Diego, Calif.

“The Mercy is deployed to Los Angeles effective last night. The Comfort will be deploying to New York City in less than 14 days. We’re deploying Army field hospitals to Seattle and New York City,” he said
“I anticipate deploying more expeditionary medical units in the coming days and weeks to do that, and eventually we’ll hop them around the country as the needs arises. That’s going to put a demand both our resources and our doctors and nurses and other medical professionals. We think we can manage it. We think it’s important to help our fellow Americans out.”

Acting Secretary of the Navy Thomas Modly said in a separate Tuesday briefing at the Pentagon that Mercy was off the coast of California now for ballasting and initial training with the civilian crew and 1,128 medical personnel. The hospital ship will arrive in Los Angeles in the coming days, where it will need about 24 hours to work with local officials to figure out the process for bringing patients onboard. Once that process is determined, patients will soon begin arriving.

The Trump administration announced last week Comfort would be activated and sail to New York City to relieve the burden of area hospitals tasked with responding to coronavirus concerns.

“Personnel have been identified by name and have begun to embark USNS Comfort in preparation for departure to New York City at the start of next month,” U.S. 2nd Fleet said in a statement to USNI News.
“The ship will continue to embark personnel and equipment over the next week.”

New York is becoming the epicenter of the U.S. coronavirus outbreak, accounting for almost 5 percent of worldwide cases. As of Tuesday morning, there were more than 13,000 cases in New York City alone, according to Johns Hopkins COVID-19 map.

“You can see that New York, far and away, has the bulk of the problem,” Gov. Andrew Cuomo told reporters on Monday.
“Find more beds, use more rooms.”

New York officials predict the height of the outbreak will occur in about 40 days.

Comfort’s mission will be to alleviate the burden on New York’s hospital system by providing non-Covid-19 healthcare. The 1,000-bed hospital ship is optimized for battlefield medicine and trauma care and is less equipped to take care of infectious diseases.

“The white hulls and red crosses of these hospital ships have long become a welcome sight around the world, standing at the forefront of our humanitarian mission as the United States Navy and Marine Corps team. They represent all that is good about the American people that they represent, and now they will serve our own people in this time of need, providing critical surge hospital capacity to America’s two largest cities,” Modly said.

The two hospital ships will be operated under the Commander of U.S. Naval Forces Northern Command and will coordinate closely with state and local governments and health officials to ensure they are best meeting the needs of the communities they are serving during this crisis, Modly said.

Like Mercy, Comfort is expected to be staffed with active-duty medical personnel and reservists who aren’t involved in their own local fights against COVID-19.

“The hospital ships are staffed with active duty and reserve medical professionals, sourced from multiple Navy Medicine Readiness and Training Commands (NMRTCs) aligned to military treatment facilities and reserve units. Many staff members aligned to the large medical centers – predominantly Naval Medical Centers Portsmouth – are pre-assigned for potential deployment aboard the [hospital] vessels,” according to a 2nd Fleet statement.
“Final staffing continues to evolve, as availability of assigned staff is determined and the reserve sourcing opportunities materialize; specifically, reserve utilization is predicated upon an effort to not impair local community COVID-19 response by reserve deployment.”

Chief of Naval Operations Adm. Mike Gilday elaborated on this point during the Tuesday afternoon press conference at the Pentagon alongside Modly.

He noted that about 2,200 medical military and civilian personnel were being deployed on Mercy and Comfort, with another 1,000 personnel already on standby and awaiting further direction from Esper.

“In terms of perspective, when you talk about numbers that large, in groups that large, it rivals what we deployed during Desert Storm,” Gilday said.

On top of that, Gilday added that the Navy has surveyed all of its medical reservists. About a third of them are directly involved in some sort of COVID-19 response effort in their civilian jobs. The other two thirds, or about 2,500, are not actively involved in community responses to the pandemic and could be called upon if Esper needed the Navy to contribute more to the response effort.

Comfort was in the midst of a maintenance period at its homeport of Naval Station Norfolk, Va., when the pandemic reached the U.S. last month. Comfort had returned in November from a five-month goodwill mission in Central and South America.

Navy Chief of Information (CHINFO) Rear Adm. Charlie Brown told USNI News that Comfort‘s maintenance availability was almost done when the order to deploy came. All the major maintenance items were able to be accelerated, and some non-essential items are being deferred until a later date so the ship can be buttoned up and sent to sea for trials and then into the New York City Harbor to begin accepting patients.

“The Comfort availability is expected to complete on time following a short sea trial later this week to certify completed work,” 2nd Fleet told USNI News. “[Military Sealift Command] prioritized critical maintenance and curtailed a small amount of work that could be postponed but as Comfort’s activation order came very late in the maintenance period, very little work could be canceled.”