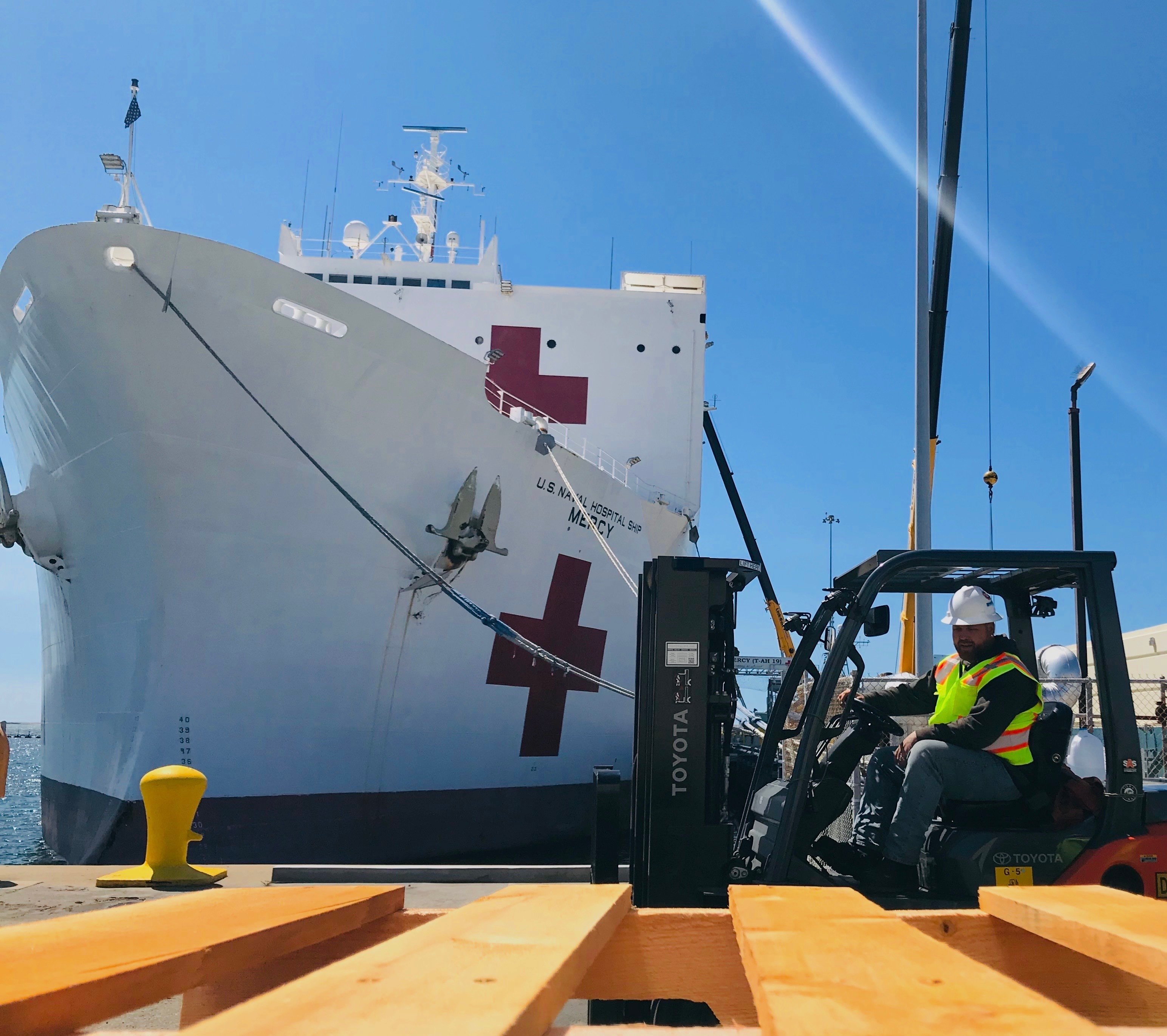 Hospital ship USNS Mercy (T-AH-19) has departed San Diego, Calif., this afternoon as part of the Pentagon response to the domestic spread of the COVD-19 virus, U.S. 3rd Fleet announced.

“The Department of Defense has been given direction to dispatch it to Los Angeles immediately. DOD has advised Mercy can get into position within a week or less of today’s order,” FEMA Administrator Peter Gaynor said on Sunday.

While Navy officials told USNI News last week that the likely destination was Seattle, federal officials determined the need in California was greater.

“Even though there are more cases right now in Washington, the projected need for beds in California is five times more that of Washington,” Gaynor said.

Governors of both Washington and California have requested the Trump administration send the ship to their states.

When Mercy arrives at Los Angeles later this week, after performing some at-sea certifications, the 1,000-bed hospital ship will be staff with about 1,100 medical professionals.

The bulk of the staff will be active duty Navy, with 58 reservists expected to be aboard, Rear Adm. Timothy Weber, the commander of Naval Medical Forces Pacific, told reporters on Monday.

“They are coming from eight military treatment facilities in my region, in the Western region of the United States. They are not coming from overseas,” Weber said.
“These reservists are all volunteers and while they are medical professionals, they have self-identified as not being members of a clinical community helping their local jurisdiction with COVID-19.

“Nine of Mercy’s 12 operating rooms will be staffed, but the ship does not plan to deliver babies, said Capt. John Rotruck, the commanding officer of the Medical Treatment Facility USNS Mercy.
“We are not going to be doing obstetrics care or pediatric care onboard the ship.”

Over the last week, the Navy has prepared Mercy to go underway as the virus has spread across the West Coast.

Sister ship USNS Comfort (T-AH-20) at Naval Station Norfolk, Va., is also preparing to depart for a similar mission in New York City. Comfort was in the midst of a maintenance availability when the virus emerged in New York. Government officials in New York have predicted the height of the outbreak will occur in about 40 days.

At 17,000 testing positive, New York has about five percent of world’s cases of COVID-19 Gov. Andrew Cuomo said in a Sunday news conference. At least 150 have died.

Mercy will depart Naval Base San Diego with over 800 Navy medical personnel and support staff with the afloat medical treatment facility (MTF), and more than 70 civil service mariners. The ship will serve as a referral hospital for non-COVID-19 patients currently admitted to shore-based hospitals, and will provide a full spectrum of medical care to include critical and urgent care for adults. This will allow local health professionals to focus on treating COVID-19 patients and for shore-based hospitals to use their Intensive Care Units and ventilators for those patients.

Civil service mariners operate and navigate the ship, load and off-load mission cargo, assist with repairs to mission equipment and provide essential services to keep the MTF up and running.

Mercy’s MTF is an embarked crew of medical personnel from the Navy’s Bureau of Medicine and Surgery responsible for operating and maintaining one of the largest trauma facilities in the United States.

Military Sealift Command operates the ships which sustain our warfighting forces and deliver specialized maritime services in support of national security objectives in peace and war.