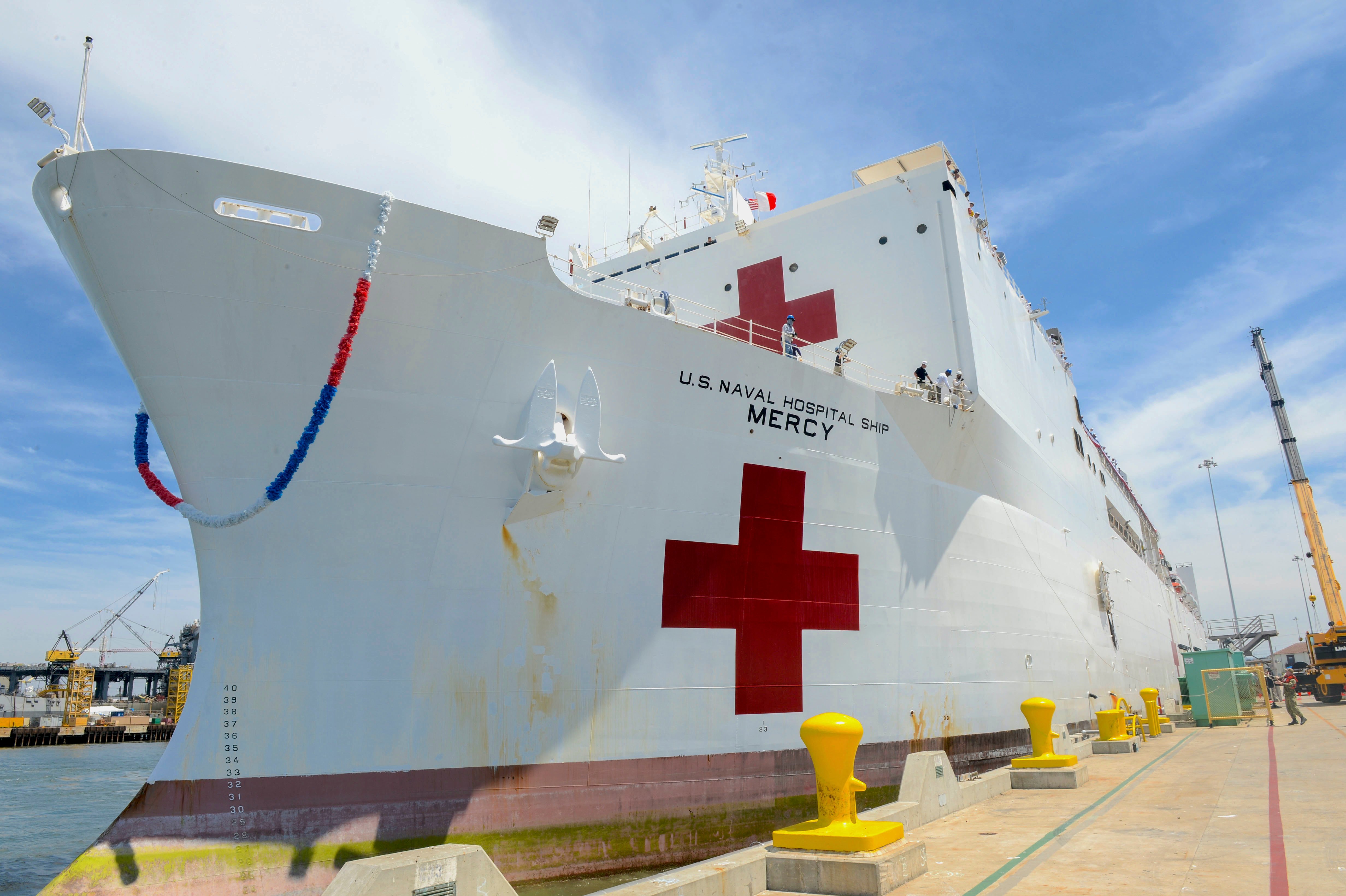 USNS Mercy (T-AH-19) moors to the pier at Naval Base San Diego upon returning from Pacific Partnership 2018. US Navy Photo

SAN DIEGO, Calif. – Hospital ship USNS Mercy (T-AH-19) was a hub of activity Thursday, as it took on a crew of civilian mariners and supplies ahead of deploying to assist West Coast civilian medical facilities hammered by COVID-19 cases.

A Navy official told USNI News that, as of Thursday, Mercy is expected to sail to Seattle, Wash., though it could be redirected as needed. The governors of California and Washington have both requested President Donald Trump to send the hospital ship to their respective states.

Mercy, a converted supertanker, was scheduled to go into the shipyard in the coming weeks for scheduled maintenance, “but she’s ready to go,” Sarah Burford, a spokeswoman with Military Sealift Command Pacific, told USNI News.
“They started the process of loading supplies and personnel.”

The medical providers embarked on Mercy and sister ship USNS Comfort (T-AH-20) will come from military treatment facilities, Rear Adm. Bruce Gillingham, the surgeon general of the Navy, said during a Thursday video teleconference. The service is currently working with officials from the Defense Health Agency to identify which facilities can spare medical personnel to serve on the ships, Gillingham said.

The Navy has to balance the needs of staffing two floating hospitals with the needs of keeping existing medical treatment facilities properly staffed. The crews that will run the ships already arrived and were screened for symptoms of COVID-19 before boarding the ships. He wouldn’t confirm a destination for Mercy, “but what I can tell you that the goal is to have Mercy sailing out of San Diego Harbor next week.”

The white-hulled hospital ship, homeported at Naval Base San Diego, Calif., has the ability to get crewed and underway within five days, known as ROS-5 or reduced operating status 5. “We haven’t received the sail order of where we are going,” said Burford, the MSC Pacific spokeswoman.

A Seattle suburb, Kirkland, is the hub of the first major domestic outbreak of the novel coronavirus. The outbreak began in late February at a long-term residential care facility that, so far, has reported 23 deaths from the infections of 81 residents, 34 staff members and 14 visitors as of Wednesday, according to the Centers for Disease Control and Prevention. Local officials in King County, Wash., on Wednesday reported 44 new cases and 10 deaths, hiking the official count to 562 and 56, respectively.

The Pentagon on Tuesday announced activation orders for Mercy and Comfort to support the Defense Department’s domestic response to the COVID-19 outbreak, which is straining local medical facilities. Comfort, which has been undergoing maintenance at Naval Station Norfolk, Va., is slated to sail to New York City.

Medical teams on both ships won’t treat COVID patients but will help local hospitals and medical facilities by shouldering some of the load by treating other patients, the Pentagon has said.

“For example, a community has a large outbreak and there’s a need for emergency room support or trauma support; a hospital ship is perfectly designed to do that,” Joint Staff surgeon Air Force Brig. Gen. Paul Friedrichs said on Monday.
“It’s hard to get the hospital ship to St. Louis, but along the coasts, it is an option to use.”

Mercy, which last got underway for two weeks in September 2019, has a standing crew of about 30 in ROS-5 status and will by the time it deploys have a crew of 70 to 100 civilian mariners who drive and operate the ship, Burford said. The ship is commanded by Capt. John Olmsted, Mercy’s civilian master.

Medical and health services would be provided in the ship’s Medical Treatment Facility, which includes a 1,000-bed hospital; 12 fully equipped operating rooms; a pharmacy; medical, radiological and optometry labs; and two oxygen-producing plants, according to the Navy. A flight deck accommodates one helicopter at a time. A Navy captain would lead the MTF’s crew of uniformed sailors and officers, and the mission will dictate the specific makeup of rates and specialties that would be needed.

“We just got the order yesterday, so right now we’re in the planning phase,” Regena Kowitz, a Naval Medical Forces Pacific spokeswoman in San Diego, told USNI News. “Our focus is making sure we get all of our sailors that are going to be part of the MTF and are healthy.”

Medical and health screenings of MSC and MTF crews and personnel are routinely done, Burford and Kowitz said, and that would include screening for any symptoms or illness to include the coronavirus. It’s unclear yet what supply of COVID19-specific tests, which includes swab kits, the MTF would have onboard for the mission.