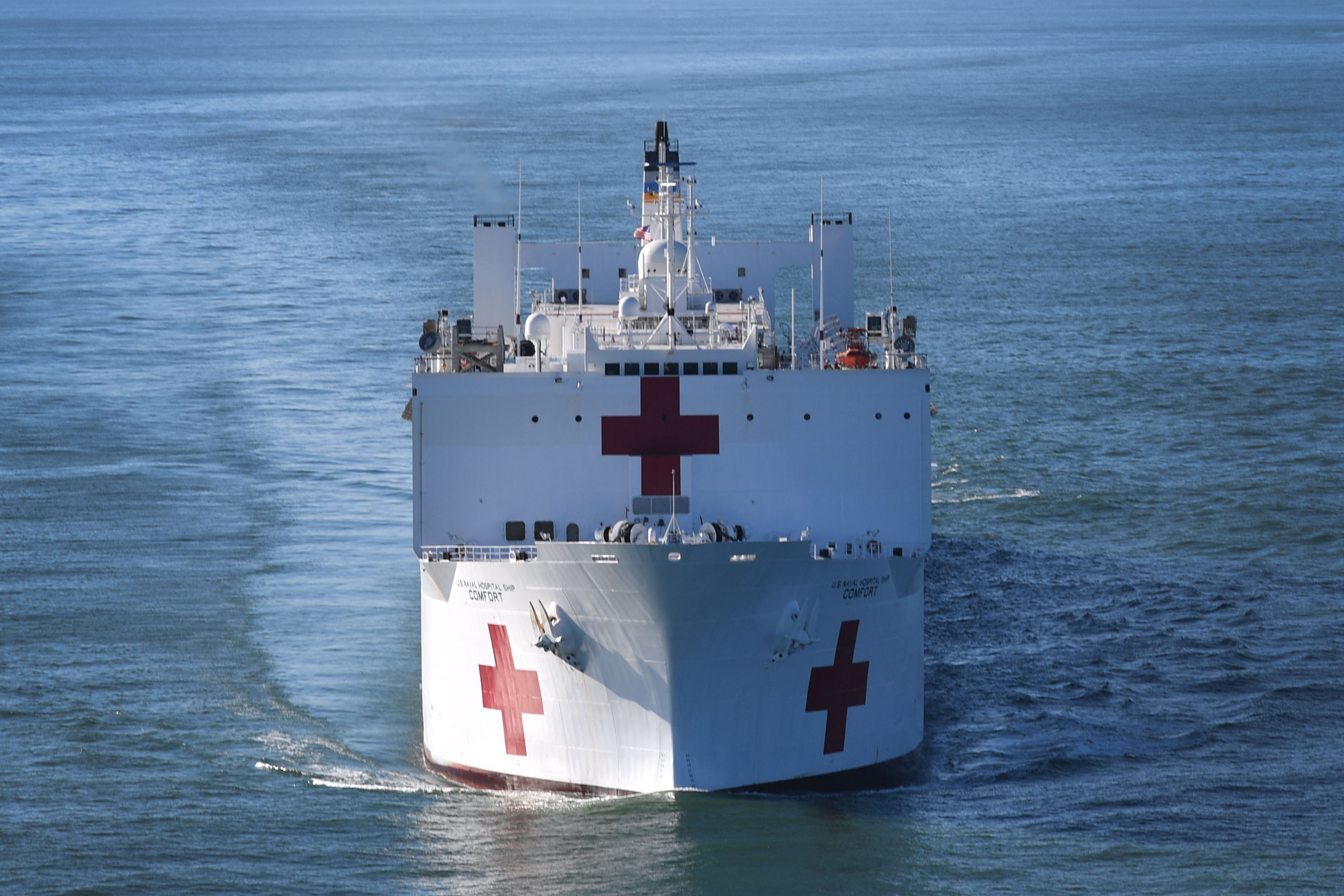 USNS Mercy (T-AH-19) will be tasked to support the West Coast, though the location is still being decided.

“The president, I spoke to this morning, he’s going to be making arrangements to send up this hospital ship, which is called [USNS] Comfort. It has about 1,000 rooms on it, it has operating rooms, and the president is going to dispatch the Comfort to us,” he said. “It will be in New York City Harbor. This will be, it’s an extraordinary step obviously, it’s literally a floating hospital which will add capacity, and the president said he would dispatch that immediately.”

New York officials anticipate the peak demand for medical services in about 45 days and are working to build up the capacity to handle the influx of COVID-19. In addition to the ship, New York has put out a call for retired doctors, nurses and other healthcare professionals to help create a reserve force of personnel, and the state is looking for sites for military mobile hospitals it can erect in advance of the surge of expected cases, Cuomo said.

The work will happen in conjunction with federal assets.

The Pentagon has given orders for East Coast-based Comfort and West Coast sister ship Mercy to be activated and staffed to support the domestic COVID-19 related response, USNI News reported on Tuesday.

It’s unclear how quickly both hospital ships can be ready to deploy. Comfort is in the midst of a maintenance period at its homeport at Naval Station Norfolk, Va., a Navy official said. Mercy was recently spotted by USNI News in a maintenance yard in San Diego, but the official said Mercy is closer than Comfort to being physically ready to deploy. More importantly, though, both ships will also need to be staffed with active-duty and reserve medical personnel.

“Both ships are currently working to complete scheduled maintenance cycles and identify necessary medical staffing to deploy as soon as possible,” read a statement from the Navy provided to USNI News. Comfort and Mercy will not deploy to treat COVID patients, but will be made available to assist with treatment of other patients in coastal locations where local health professionals are necessarily focused on a large number of COVID cases. More information on the possible deployments of Comfort and Mercy will be announced once a firm timeline is established.”

In ideal conditions, it takes about a week to assemble the personnel needed to staff both ships.

“The big challenge isn’t the availability of these inventories, it’s the medical professionals. All of those doctors and nurses either come from our medical treatment facilities or they come from the reserves, which means civilians,” Secretary of Defense Mark Esper told reporters on Tuesday.
“What I don’t want to do is take reservists from a hospital where they are needed just to put them on a ship to take them somewhere else where they’re needed.”

Trump said in his Wednesday briefing that the ships were being prepared now and could be deployed in about a week or so.

Portable military hospitals and the hospital ships are optimized for treating trauma patients rather than infectious diseases. The idea behind sending the hospital ships would be to supplement non-COVID-19 medical care that would bog down civilian hospitals, freeing those hospitals up to serve those most acutely affected by the virus.