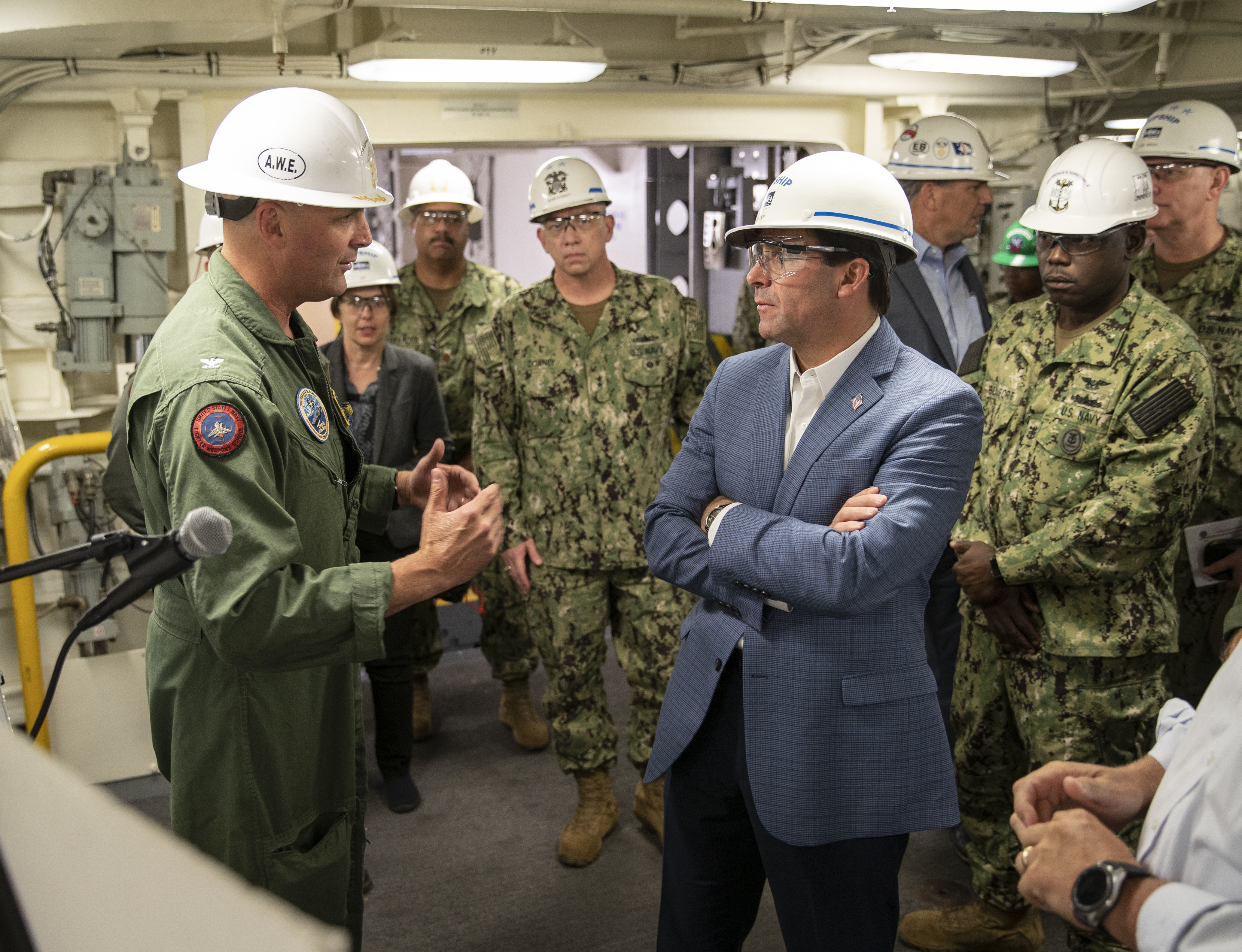 Republican and Democratic committee members asked Esper how his request to buy eight ships in the upcoming fiscal year moves the Navy closer to fielding a 355-ship fleet.

“Two of those seven are tugboats. They are salvage ships,” Courtney said. “We are not getting briefings in this committee about Russian tugboats or Chinese tugboats.”

The FY 2021 budget request also cuts funding for a Virginia-class fast-attack submarine at the same time the Navy plans to retire submarines quicker than new ones join the fleet, Courtney said. The Navy has been buying two fast attack submarines a year and has considered buying three in some years.

“For the record, we are at 52 attack submarines today. With the retirement of Los Angeles-class attack submarines, which are going to accelerate over the next four or five years, that fleet is going to shrink 44 subs,” Courtney said. “Your budget keeps us in that trough into the 2030s.”

The budget request proposes adding $2.5 billion to the National Nuclear Security Administration (NNSA). Yet, the organization currently has about $8 billion in unspent funding from the FY 2020 budget, said Rep. Adam Smith, (D-Wash.), the HASC chairman.

Gen. Mark Milley, who joined Esper at HASC on Wednesday, was asked by Rep. Susan Davis (D-Calif.), “is it in your best military advice that cutting a Virginia-class submarine to increase the NNSA’s budget by 20 percent is good prioritization?”

“No, it is not, ma’am,” Milley responded. “In that particular case, I wasn’t personally involved in the decision on that. However, that was a case where there were some internal deliberations at the last minute to make sure the nuclear enterprise was fully funded. So, it’s a question. I wasn’t personally in the meeting on that one. However, had I been, I would have supported the fully funding of the nuclear enterprise.”

Money for the second Virginia-class submarine in FY 2021 tops the Navy’s unfunded priorities list. Still, Courtney said the Pentagon hadn’t put forward such an “anemic shipbuilding request” since the height of the surge to send more troops to the Middle East more than a decade ago. The request, “defies any analysis in terms of something that comports with the National Defense Strategy, based on the activities that we are seeing from China and Russia.”

When factoring in the number of impending ships decommissioning, Rep. Rob Wittman (R-Va.) asked how the plan moves the Navy forward in terms of fleet size and reflecting the need for the Navy to project power and deter conflict.

“We’re decommissioning four LCS’s, four cruisers, and three amphibious ships,” Wittman said. “I’m not very good at math, but that math doesn’t add up to me to get to 355. In fact, we’re heading south on that.”

Esper agreed the FY 2021 budget plan falls short of expanding the fleet, but for what he said was a good reasons.

“We need to get on a better trajectory for 355-plus. That’s why… we need that three to five percent real growth,” Esper said, referring to his request for defense spending to increase at or above the annual rate of inflation. “I do support the Navy’s decision to reallocate dollars to readiness, because of the challenge we’ve had getting ships to sea and operationally available.”

Flat budgets, such as this year’s request of $740 billion, which is just slightly above the FY 2020 budget, are what the Pentagon should expect, Smith said. He suggested Esper should consider how the Pentagon can fulfill its National Defense Strategy mandate.

“It’s highly unlikely that we’re going to hit that three to five percent number so it might be appropriate to rethink aspects of the NDS and see what makes sense, in keeping with the overall theme that our means match our desired ends,” Smith said.

HASC members from both parties were also not pleased with how Esper moved money from the FY 2020 budget to the Department of Homeland Security to pay for border barrier construction.

Rep. Mac Thornberry (R-Texas), HASC’s ranking member, said he supports border security but did not like the way the administration moved money from the defense budget to pay for what is a Department of Homeland Security program.

“We are about to embark on trying to write a defense authorization bill… and I guess my basic question to you is: Is it going to matter?” Thornberry asked. “Or, will [the Office of Management and Budget] send down a directive saying… to take away some money for some planes, or satellites or something and move it to other things?”

Esper said, “What the Congress does matters, matters very much and we look to the Congress as partners as we try to develop our game plan to serve the country, defend the country and help us implement the NDS.”