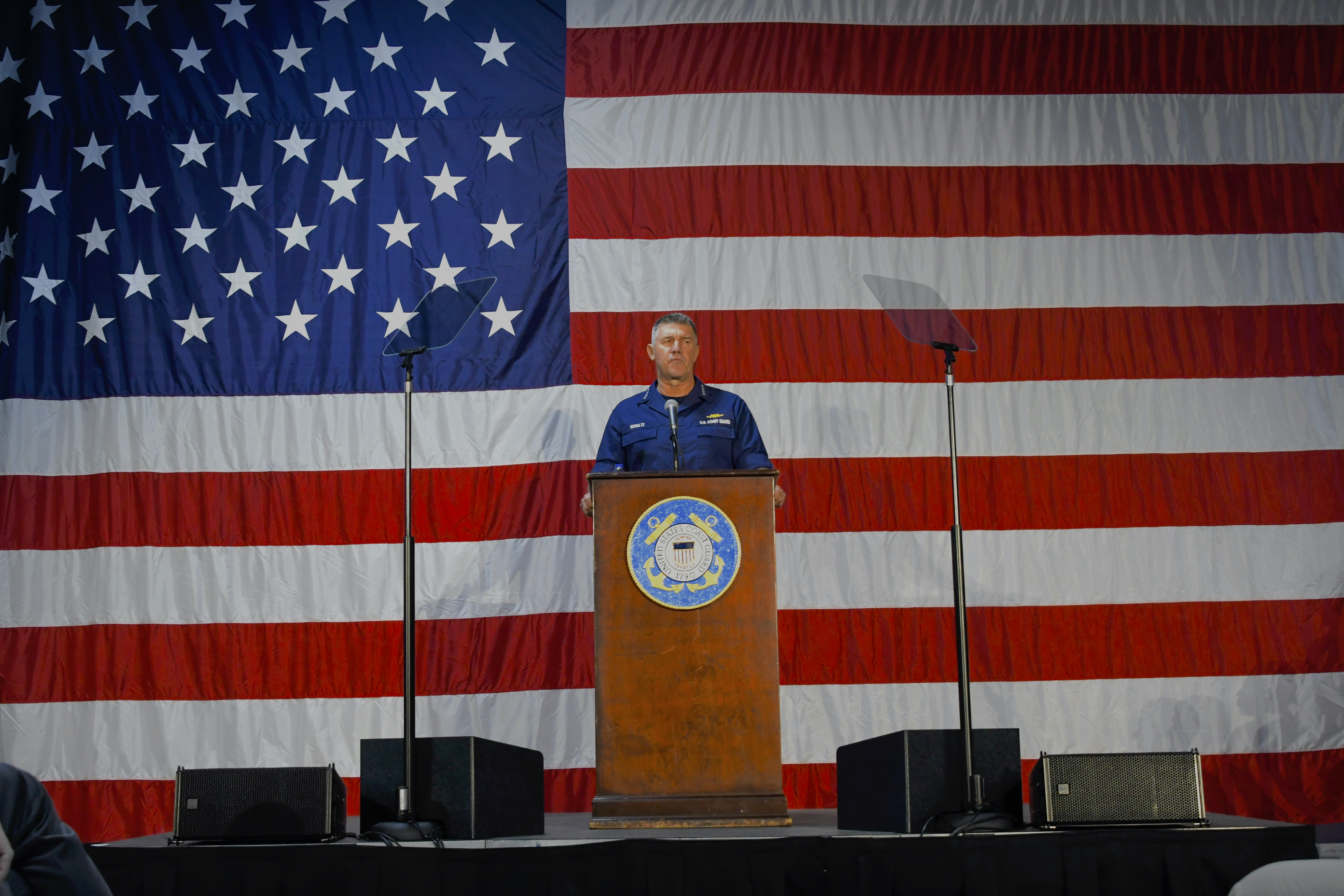 “We have much work to do to achieve our goals,” Adm. Karl Schultz, the commandant of the Coast Guard said during the State of the Coast Guard speech in Charleston, S.C.
“In a constantly evolving environment, we cannot remain the world’s best Coast Guard – we cannot be ‘Always Ready’ when America needs us – unless we think and act differently. Unless we continually hone our operational tradecraft. Unless we continue to develop a positive culture that promotes respect, diversity and inclusion through strong leadership at all levels. Unless we develop our people and continually earn and maintain the public trust.”

Along with a priority for new icebreakers, the Coast Guard is pressing for a new class of cutters to help in the continuing counter-drug fight at sea. The Offshore Patrol Cutter program will deliver the first vessel – the future USCGC cutter Argus (WMSM-915) – in 2022 and ultimately grow to a fleet of 25 hulls, replacing existing Vietnam-era medium-endurance cutters. The OPCs “will become the backbone of our modernized fleet – [and]will have a critical role in this campaign,” he said.

The Coast Guard conducts those counter-trafficking missions with “like-minded friends and allies,” said Schultz, noting that for the first time, partner nations’ made half of drug interdictions.
“This success is noteworthy, but only a hint of what we hope for in the future,” he said. 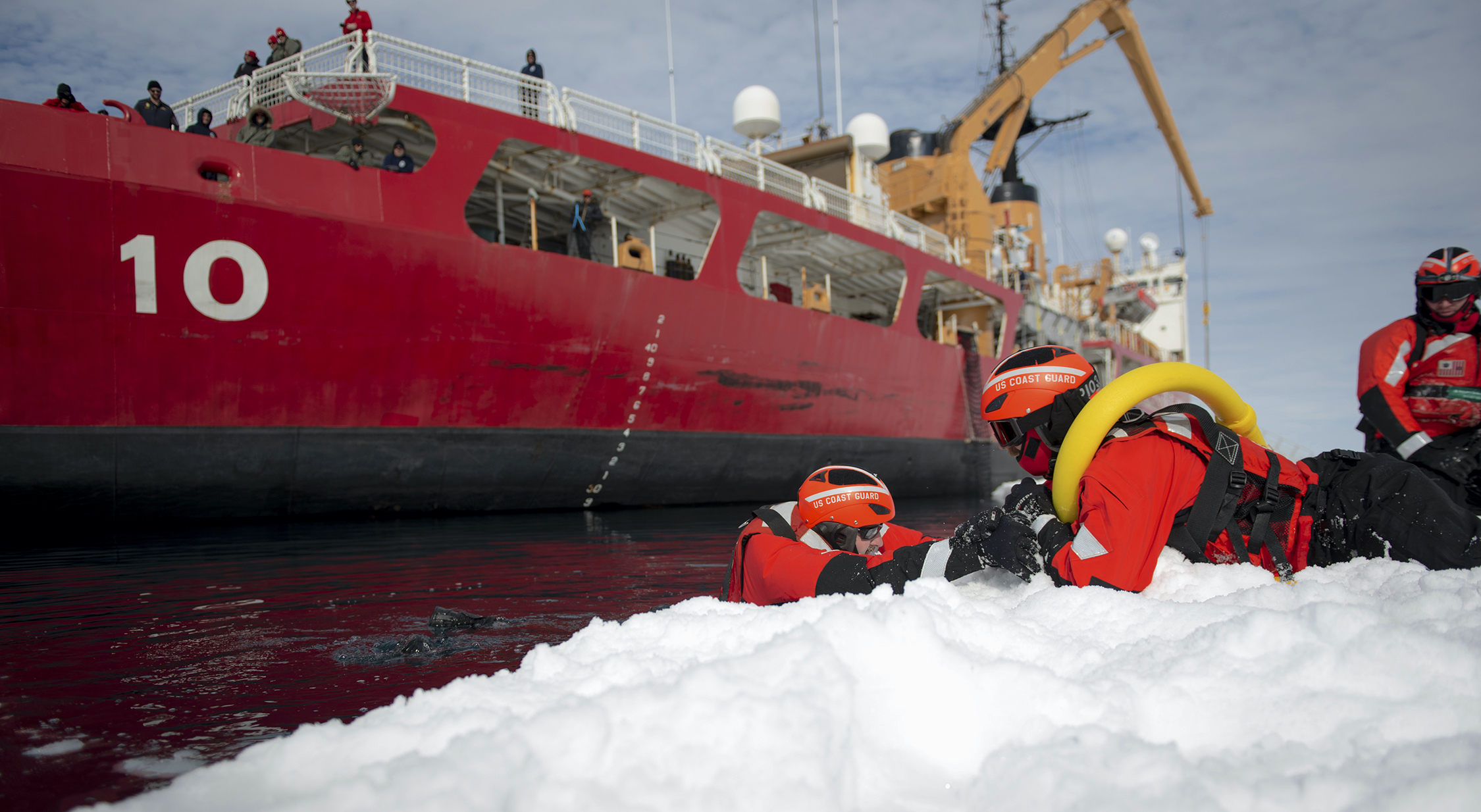 The Arctic and Antarctic regions remain geo-strategic flash points, Schultz said, and the U.S. “must up our game” by ensuring it has a fleet that can deploy and operate effectively – and against near-peer adversaries – in those regions.

“As our Polar Regions become more accessible, foreign competitors seek to encroach on American sovereignty, exploit natural resources, and potentially limit access to shipping routes,” said Schultz, noting the United States has only two icebreaking cutters. “This is a woefully unacceptable level of presence in an area where we must be a leading force. Presence equals influence, and we must up our game with respect to high-latitude presence.”

The 44-year-old heavy icebreaker USCGC Polar Star (WAGB-10) operates in remote, unforgiving environments. Each year it deploys to Antarctica to support Operation Deep Freeze at McMurdo Station before spending six months in dry dock for maintenance away from its Seattle homeport.

Relief from that demanding schedule will arrive when the first Polar Security Cutter joins the fleet. The FY20 budget submission includes $555 million requested for the second of at least three polar cutters. At least three PSCs and three medium icebreakers “will ensure American sovereignty and presence in the polar regions for decades to come,” Schultz said. But medium icebeaker USCGC Healy (WAGB-20), at age 20, still suffers from poor, unreliable communications during patrols in the Arctic.

“We must work together to solve our communication blackout in the Arctic now,” Schultz warned.

And it’s not just bad comms at sea. “Just last month, the harsh environment of northern Alaska once again degraded communications equipment, Schultz told the crowd, recounting how a trio of petty officers from Electronic Systems Support Detachment Kodiak rode snow machines “until the cold rendered them inoperable. They continued the journey by pulling their heavily loaded sleds, and then dug by hand through several feet of snow in order to effect temporary repairs on-site until weather improves.” 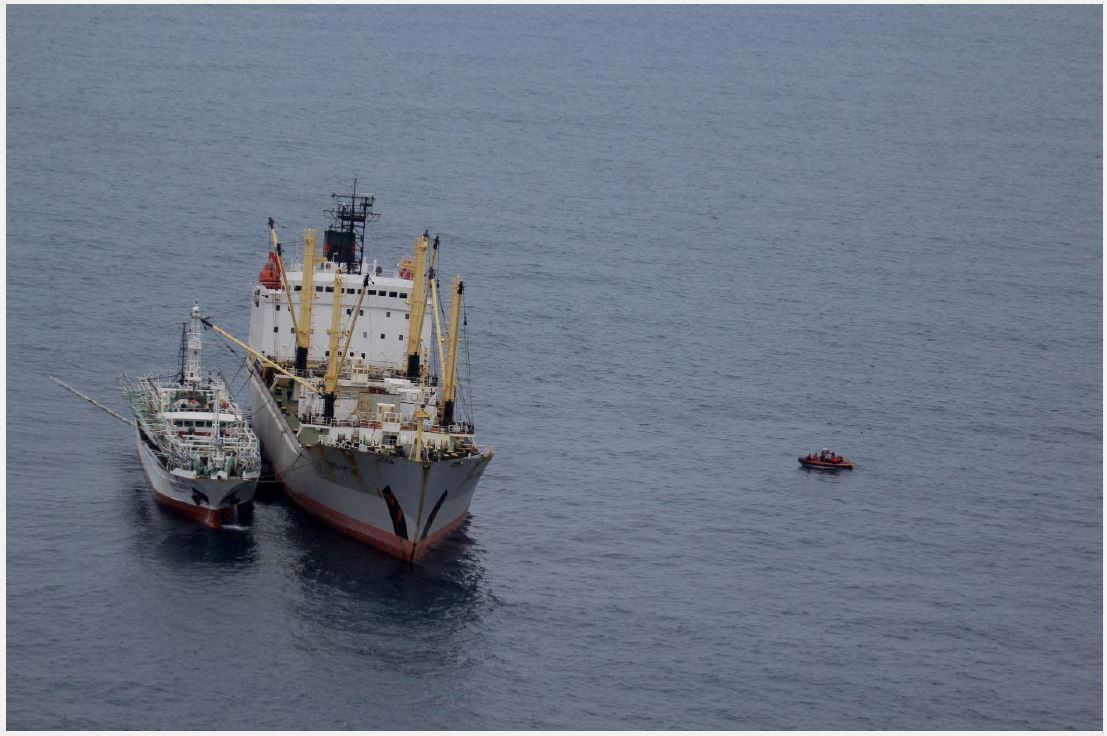 A boarding team aboard an over-the-horizon cutter boat from Coast Guard Cutter Mellon (WHEC-717) transits toward Chinese-flagged fishing vessel Lurong Yuan Yu 899 as it offloads catch onto the Russian-flagged transshipment Vessel Pamyat in the North Pacific Ocean on July 15, 2019. US Coast Guard Photo

“They are actively exploiting other nations’ natural resources, including fish stocks, in many cases challenging the sovereignty of smaller or less developed nations. China, with the world’s largest distant-water fishing fleet, is one of the worst predatory fishing offenders, engaging in what we call illegal, unreported, unregulated fishing, or IUU.”

“This is far more than just about conservation and sustainability. This is a national security challenge warranting a clear response,” he added. Fish feeds billions, and fish stocks “are critical to many nations’ sovereignty and economic security.” But $23 billion worth of fish each year are lost to illegal activities.

Schultz said the Coast Guard can “be a global leader” by working more with U.S. partners and stepping up targeted operations, and it’s developing “a progressive IUU Strategic Outlook,” with release in late summer. An initial partnership with Global Fishing Watch, an international non-profit group supporting ocean sustainability, will enhance maritime domain awareness across the Pacific by sharing data about fishing activity in near real-time and, “if successful, this initiative may be scaled to our fisheries enforcement efforts worldwide,” he added.

Enhancement is critical in places like the Indo-Pacific, where many island-nations are “vulnerable to a spectrum of illicit activity. We are most concerned by coercive states’ influence operations, intentions to construct dual-use infrastructure projects, and implied military threats to persuade other states to heed their strategic agenda,” Schultz said, in a swipe at China and its growing investments and involvements across the Pacific.

By the end of this year, he said, the Coast Guard is “on track” to take delivery of the first two FRCs to be homeported in Guam, bolstering capabilities in the region.

This year will see another Operation Aiga deployment to Oceania, following last year’s deployment of a Coast Guard buoy tender and fast response cutter to conduct fisheries enforcement and surveillance missions in Samoa and American Samoa and with U.S. partners in the region.

The Coast Guard remains actively engaged in the Middle East, where “we are all in” in supporting U.S. Central Command, Schultz said. Six patrol boats and advanced tactical integration teams are operating in the Arabian Gulf, and maritime engagement teams continue to train U.S. and allied navies. Next year will see the first FRCs begin to replace the older patrol boats, he said. 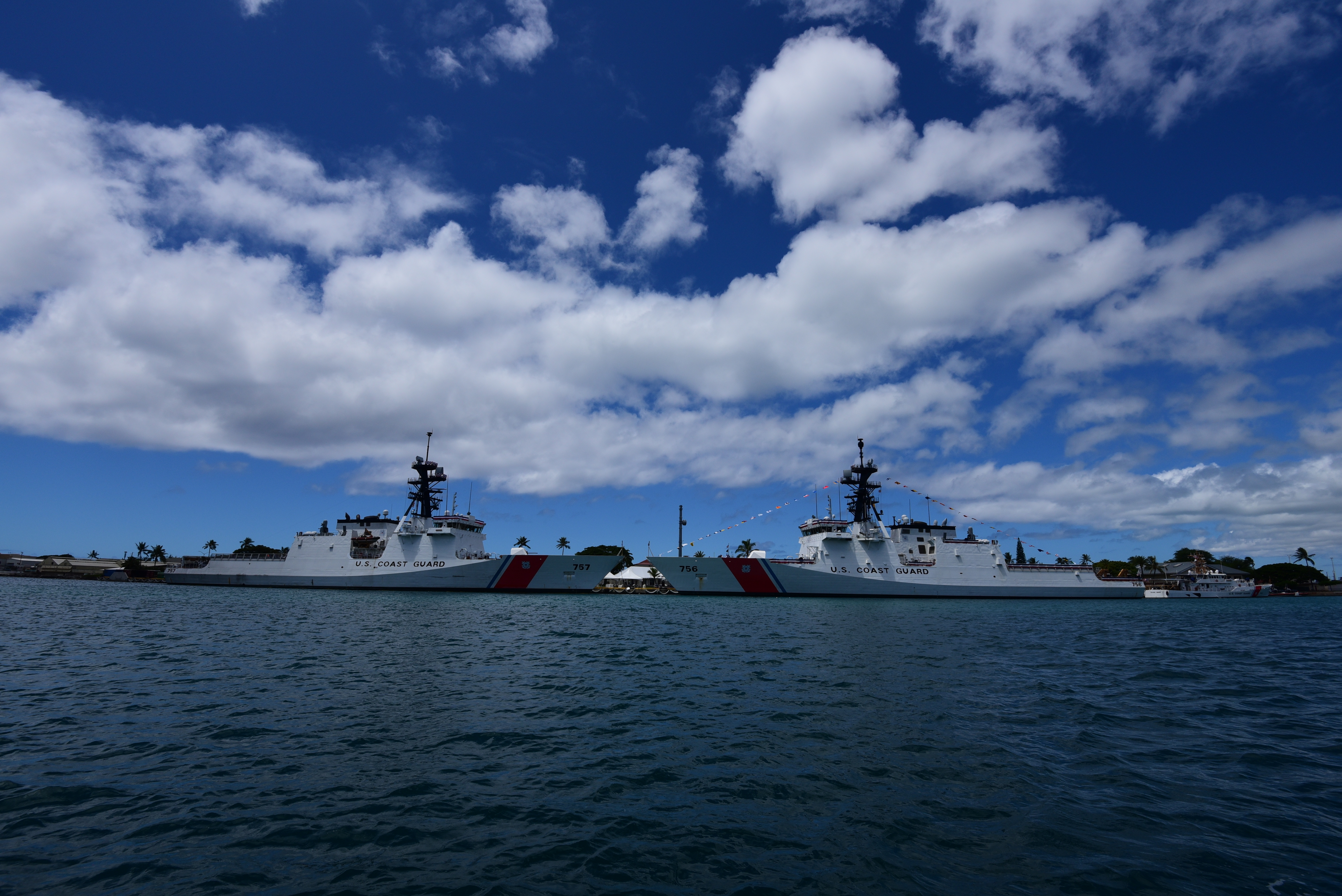 Closer to home, the Coast Guard has provided domestic support to U.S. military units, including counter-drone protection for Navy ballistic missile submarines and the U.N. General Assembly meeting in New York City. But funding disparities exist. While DoD funding covers those counter-drone missions, “many of our defense contributions are not, leaving the Coast Guard on an unsustainable path to support our growing operational requirements,” he said. But DoD’s readiness funding grew three times more just in five years “despite our services having the same types of readiness challenges.”

The FY21 budget request “starts us on a healthier funding trajectory,” he said, but “the long-term solution is to recognize the Coast Guard’s crucial role in maintaining our national security.” He’s pushing for separate “security” and “non-security” appropriations to “ensure the Coast Guard is funded in parity with the rest of the military services.”

Schultz also wants to reduce the Coast Guard’s backlog in shore infrastructure, which has grown to $2 billion, from $1.6 billion last year. “Every mission begins and ends at a Coast Guard facility,” he said, but years of “flat-line budgets forcing trade-offs” have left many aging buildings crumbling and suffering from mold and leaks.

“Every day that we continue to operate with antiquated infrastructure, it gets harder to protect our modern maritime economy, harder to save those in peril, harder to attract talented men and women into our ranks, and ultimately harder to defend our nation,” he said.

But investments can have real, tangible impact, the admiral noted. Record-breaking flooding in Lake Ontario and the Niagara River last year inundated Coast Guard Station Niagara, N.Y., for four months, forcing the crew to pump 200,000 gallons of water daily “just to keep their station operational,” Schultz said, and they rescued 45 people during that time. But he contrasted that with Houston, where newer facilities withstood the harsh effects of 2017’s Hurricane Harvey, and Coasties saved almost 12,000 lives.

The Coast Guard plans to consolidate much of its East Coast fleet in Charleston – by 2021 it will have the deepest harbor on the East Coast – with five national security cutters and “a complement of” OPCs, he said. Charleston could eventually be the Coast Guard’s largest concentration of people and assets. Initially, shoreside facilities are getting upgraded with $140 million of prior-year hurricane supplemental funding, he noted, but more will be required. 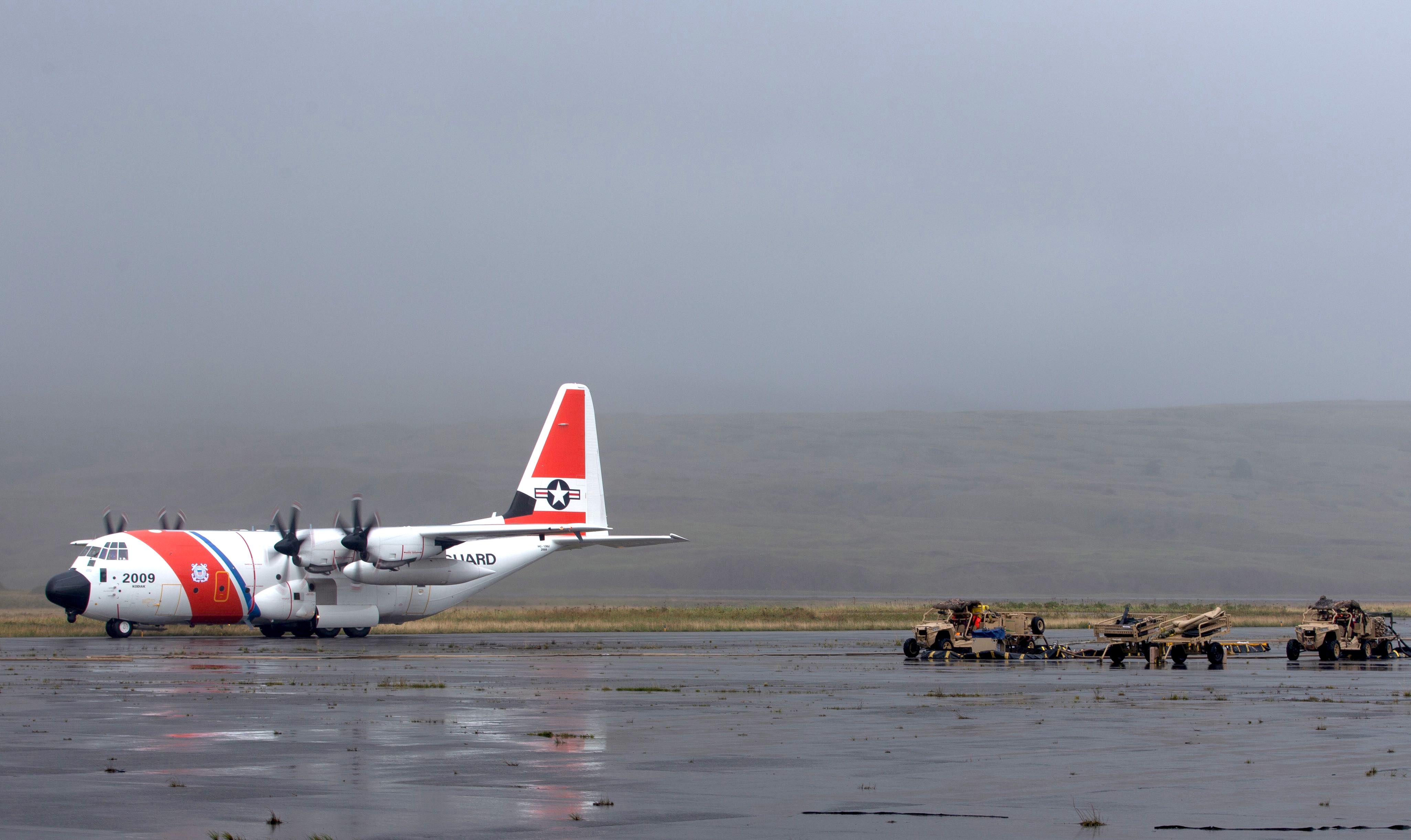 Schultz, who is two years through a four-year tenure as commandant, said the Coast Guard needs more high-tech investments to replace “1990s-era hardware, software and analytics.”

“Years of investment trade-offs have brought our information technology to the brink of catastrophic failure,” he said. Last summer, “over 95 vital systems went offline for several days due to a single server malfunction, impacting our ability to save U.S. citizens, thwart criminals, defend our nation and, yes, even to simply check our email. Our people will never fail our country, but our technology is failing our people.”

“In an era where data generates more revenue than oil,” he added, “it is crucial that the Coast Guard modernizes its data management to help build and sustain its future force.” Thursday, he issued a new “Tech Revolution Road Map” plan on how it plans to upgrade and modernize its information technology equipment and systems, already with an $300 million annual shortfall.

This year the service will boost internet speeds by 50 times and double connectivity on major cutters with upgrades over the next three years, he said, and transition to the cloud with Microsoft Office 365 will make email more reliable in day-to-day operations and crisis-response situations. “This revolution starts now,” he added. 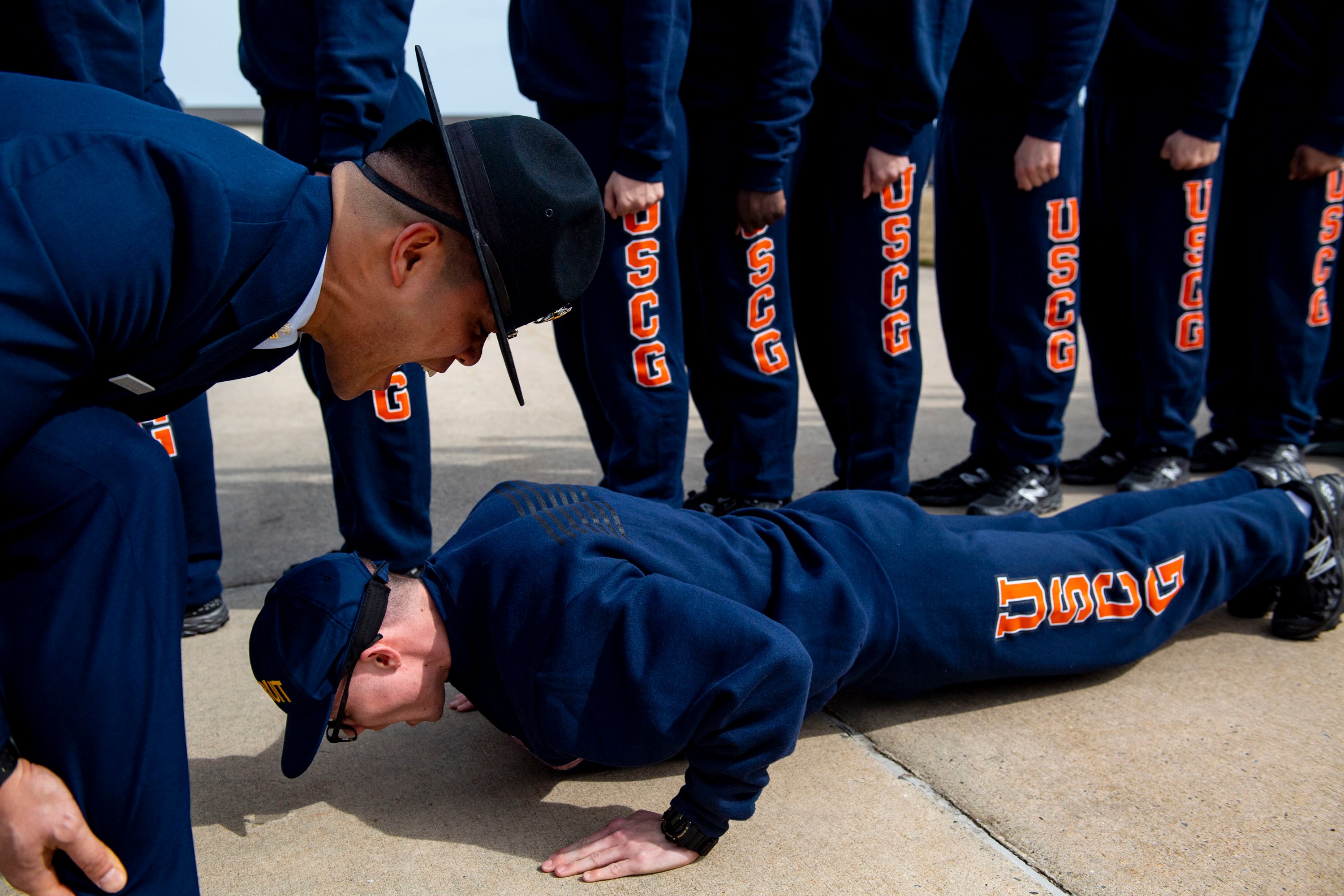 The Coast Guard is progressing on several initiatives started last year to recruit and retain a diverse force of Coast Guard men and women. “Talent management is both our most pressing challenge and our greatest opportunity,” Schultz said.

“The allure of high-paying jobs in the private sector makes it harder every day to fill our shortage of qualified marine inspectors who facilitate the flow of commerce and (who) are typically found in our commissioned officer ranks,” he said, noting enlisted personnel have filled those gaps. This year, he’s expanding the Enlisted Marine Inspector Program by adding 63 apprentice positions and 17 inspector billets.

Schultz spoke on other personnel initiatives. The Coast Guard is testing a mobile tablet application called INSPECT that’ll enable access to Coast Guard databases and help cover gaps in training funding shortfalls that “have atrophied our skills in critical fields of expertise,” he said.

Preliminary results of a two-year holistic underrepresented minorities study, launched in May 2019, are due this June and “will provide valuable insight into how we can strengthen our culture of respect,” he said. He’s extended the charter for the Personnel Readiness Task Force “so we can accelerate the pace of change informed by the study’s initial results.” Next month, he added, “we will launch a four-year Diversity and Inclusion Action Plan to provide leaders at every level with the skills to realize the full potential of our talented workforce,” and later in the year will come a Workforce 2030 action plan to address future personnel readiness needs.

Other feedback from the fleet already is opening up opportunities for the service. District commanders now have the authority to promote talented Coast Guard men and women through the Coast Guard Meritorious Advancement Program. “This is one way we can honor an individual’s embodiment of our core values,” he said. With that, the commandant on Thursday meritoriously promoted, to first-class petty officer, Aviation Survival Technician 2nd Class Nathan Newberg and Storekeeper 2ndClass Emily Ford, who were highlighted in service videos for their actions and initiatives in saving lives. Newberg, a rescue swimmer, rappelled to the listing cargo ship MV Golden Ray after it capsized off Georgia last September. Also that month, Ford helped coordinate helicopter rescues of nearly 300 Bahamians after Hurricane Dorian struck the islands