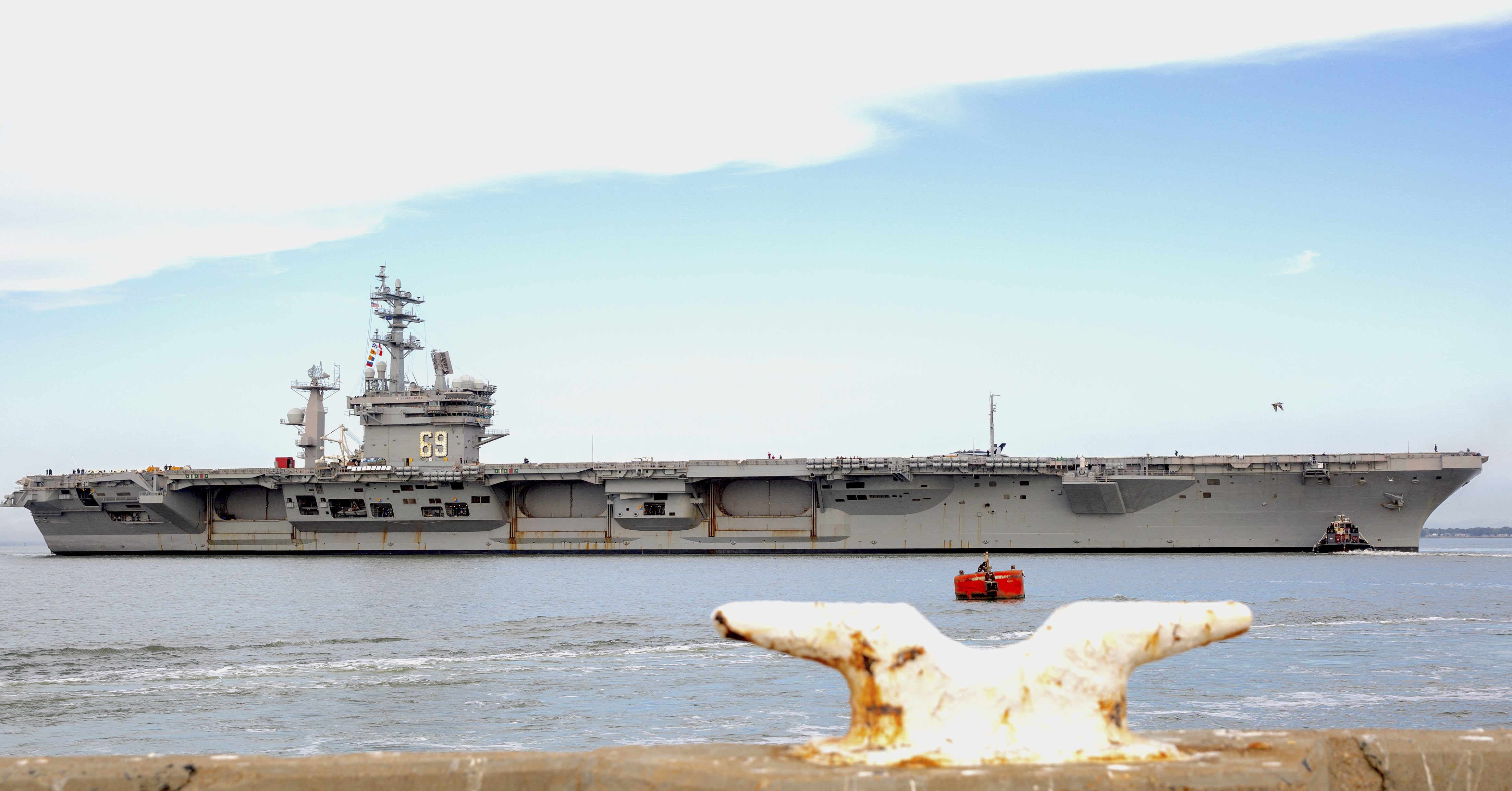 This post has been updated to correct that two organizations that facilitate coordination and lessons learned on carrier maintenance are longstanding organizations.

ARLINGTON, Va. – The Navy does not believe that carrier USS Dwight D. Eisenhower (CVN-69) overran its last maintenance period because of classwide issues that could affect the next ships as they age, but rather the work tripled in length due to challenges specific to that hull and the shipyard at that time.

Capt. Charles Ehnes, In-Service Aircraft Carrier program manager within the Program Executive Office for Aircraft Carriers, told USNI News today that lessons are learned and shared from each carrier maintenance availability, but the challenges with IKE – whose six-month work period at Norfolk Naval Shipyard more than tripled in duration – are something of a unique situation.

“In the case of Eisenhower, I wouldn’t quote-unquote blame the ship, but I would say it was specific to the time and place of that ship and the work that went into the ship, and there were performance issues as well as material issues,” he said while answering questions at a briefing at the annual Surface Navy Association 2020 symposium.

In September 2018 – 13 months into what ultimately turned into 19 months of maintenance work – Eisenhower Commanding Officer Capt. Kyle Higgins wrote to the crew and their families in a Facebook post, saying that “IKE is a 41-year-old dynamo. If you Google ‘IKE 2016 deployment’ you will see the incredible things we accomplished. … But that came at a price. You can’t put a ship through so much without having equipment break and having to replace other parts.

“If we look at IKE as a classic car … you take it to the shop and you know what needs to get done. But as happens on older cars, more things pop up. They all have to be taken care of so your car stays in the shop longer. You’re able to get some other work done on it at the same time – new upholstery, took care of some rusty areas – while the mechanics are working on the front end. Problem becomes the work takes even longer – there’s some rework, even more things are discovered that have to be addressed – and then you notice something else, and the list of repairs grows,” he continued.

Asked what lessons learned from IKE could be applied to USS Carl Vinson (CVN-70), the next oldest ship, or others in the class, he did not mention any specifics.

“General terms: every single maintenance availability is its unique combination of the material condition of the ship, its required modernization, and workload capacity with some specific low-density/high-demand skillsets in the yard that’s been assigned the work. So it’s sort of a combination of all of the above. There are lessons learned – and they have been learned and shared,” he said.

Asked about lessons learned from the subsequent carrier to enter into maintenance at Norfolk Naval Shipyard – USS George H.W. Bush (CVN-77), whose work might have otherwise taken 10-and-a-half months but is scheduled for 28 months due to significant backlogs at the East Coast public shipyard – the captain said planning for the lengthy maintenance period was the best the Navy could do for all parties involved.

“While no one is satisfied with making an avail longer than the notional, if that’s what’s required and we’re able to articulate those requirements ahead of time, it’s better for everyone [to] know this is going to be a long one so they can make the necessary adjustments to operational cycles than it is for us to push through an avail and have it run late,” he said.

Noting that there are two organizations that help facilitate conversations and coordination between the PEO, the shipyards, the carriers and the fleet, and to manage lessons learned, Ehnes said that quite a bit of effort continues to go into “tweaking that class maintenance plan, making sure we’ve got the right time periodicity and condition-based periodicity for all the various systems and components on the ship, building any unique availability work packages, … managing the modernization and configuration data management as well as ensuring that as we go through maintenance avails we’re getting actual cost data so we can better forecast and budget future avails.”

Of the 11 carriers in service, two are in lengthy drydocking periods, one is in a shorter maintenance period, one is undergoing “upkeep” ahead of a deployment early this year, and two are in or preparing to go into mid-life refueling periods.