CAPITOL HILL – A freshman lawmaker and 20-year Navy veteran wants the sea service to take a hard look at its readiness-generation model to see if there are more efficient ways to spend ships’ time.

Rep. Elaine Luria (D-Va.), who served as executive officer of cruiser USS Anzio (CG-68) in 2013 and 2014 – just before the Optimized Fleet Response Plan took effect – questioned top Navy officials at a recent House Armed Services Committee hearing about the cost-effectiveness of OFRP, which she says reduces the amount of time ships spend deployed at sea and may not be the most efficient use of time or resources.

Is it worth the money to have more ships with lower overseas presence each? Luria said she’s not sure yet, but she’s not sure the Navy has the data to support its stance either.

OFRP was developed to ensure sufficient time for maintenance and to create a “sustainment” phase that kept ships at peak readiness at home in case they were called upon to surge overseas. Prior to OFRP’s development, aircraft carriers would sometimes go on deployment, go home, and then have to deploy again – something the previous model was not set up to do, which then created headaches when it came to conducting ship maintenance. OFRP allows for another deployment during the sustainment phase if a surge force were required. Or, the Navy has found, that sustainment time has also proven to be a good opportunity for sailors to meet training and education goals, for crews to conduct pierside maintenance efforts or for ships to have a buffer if they need to get into the yard early for a major maintenance period.

Luria acknowledged that the maintenance community might not be able to keep up if the Navy reverted back to a two-year cycle – public yards are already facing backlogs of work on submarines and aircraft carriers, and private repair yards’ drydocks are currently full – but she advocated a serious look at the cost of the 36-month OFRP cycle, both in dollars and lost opportunities.

“I think we really need to have the Navy give us a full report on the effectiveness of employing OFRP and also what the subsequent additional cost due to the lower frequency of deployments has been and will be in the future. I think that’s a major concern,” she said.
“We got to where we are in developing the OFRP because the maintenance couldn’t keep up, so they decided, let’s just make the cycles longer,” she added, but said she didn’t think the Navy fully understood the cost of OFRP in terms of needing more ships to meet presence commitments and other factors. 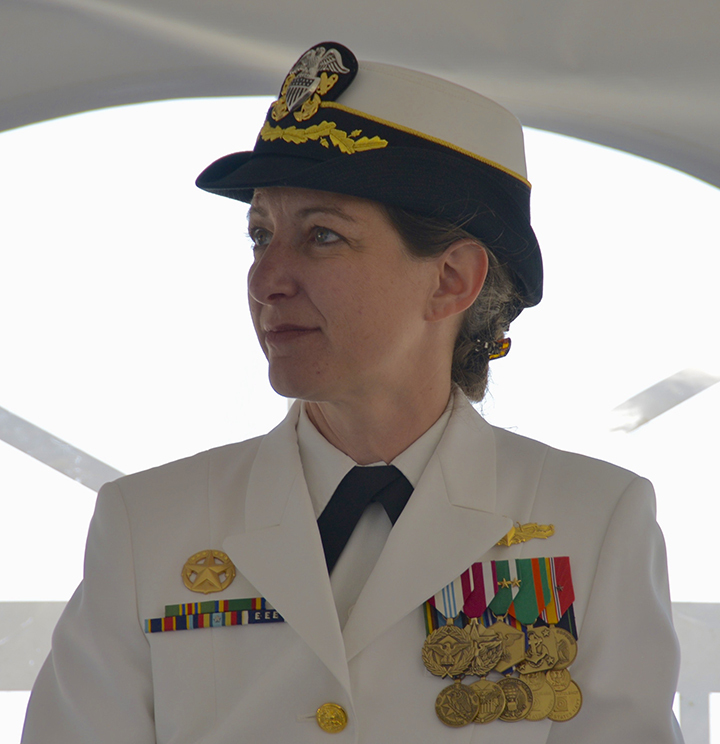 Rep. Elaine Luria (D-Va.), who graduated from the U.S. Naval Academy in 1997 and served 20 years in the Navy before being elected to Congress. Photo courtesy Luria’s campaign website.

If the Navy abandoned its 36-month OFRP cycle in favor of a system that created a higher deployed rate, it would open up some options. Asked whether the Navy should have a greater at-sea presence with the same fleet size or should have a smaller fleet with the same presence levels, Luria said it had to be “a careful balance.” Hence, the Navy study she wants to see.

What she is sure of is that, regardless of what force-generation model the Navy uses, more ships need to be on deployment at any given time, especially in the North Atlantic and in the Western Pacific.

“It shouldn’t just be a once- or twice-a-year news story that we did [freedom of navigation operations] off the Spratly Islands. It’s unacceptable that China has made claims to land that is not their territory; they’ve grown it, they’ve put airfields and radars and missile defense systems on these islands, and so they have a clear objective to expand their territorial reach,” Luria said.
“Our presence in their backyard sends a strong message and I think we need to be there more.”

As for countering Russia in the North Atlantic and other European waters, she said, “interoperability with our NATO allies, it’s a skill that just doesn’t come like that; I think when you do a NATO deployment or you have an opportunity to work with a NATO ship within a U.S. strike group, that takes a lot of work to get up to speed and have all your communications and methods for operating at the individual unit and the commander level in sync. So if we don’t practice it, we’re not going to be as ready when the time comes for us to need it.”

Despite the desire to get more ships deployed, she did acknowledge the struggles with ship maintenance, especially at the four public yards. The Navy is at the beginning of a 20-year, $21-billion effort to optimize the workflow at the naval shipyards and give them the most modern equipment to maintain nuclear-powered subs and carriers, but it may take some time until those efficiencies can eliminate the current work backlog.

As examples at the Norfolk Naval Shipyard, Luria said, USS Dwight D. Eisenhower (CVN-69) just wrapped up a maintenance period that spanned triple its intended length. USS George H.W. Bush (CVN-77) is at the front end of a planned 28-month availability, which is nearly triple the length of what a maintenance availability should take at this point in Bush‘s service life.

“The Nimitz-class carrier was designed in that first 10-year period to have three availabilities: six, six, and 10 and a half months. For [CVN] 77, it was designed to be a 10-and-a-half-month availability, and it’s a 28-month,” Luria said.
“I’ve spoken directly to the commander at Norfolk Naval Shipyard, I’ve spoken to Vice Adm. (Tom) Moore at [Naval Sea Systems Command], and spoken to the [chief of naval operations] about what got us to this 28 months. And the truth is, the capacity of the shipyard has caused the Navy to prioritize things, and they prioritized submarine refueling and also the MTS, the Moored Training Ship, conversion.”

The Navy currently uses an old Lafayette-class ballistic missile submarine as its moored training ship for the Nuclear Power Training Unit in Charleston, S.C. The service is upgrading to two Los Angeles-class attack submarines, which require major hull cuts, removing some portions of the boat and adding new sections in.

“Therefore, with the limited workforce and limited resources, Norfolk Naval Shipyard has said it’s going to take 28 months to finish this [Bush] availability,” Luria continued.
“And yes, there’s some work that’s been added that would probably put it past the 10 and a half months, but basically I’ve been told it could get done in 14 months if it was the top priority. We have these extended maintenance availabilities that are preventing carriers from deploying with the periodicity and the duration they should.”