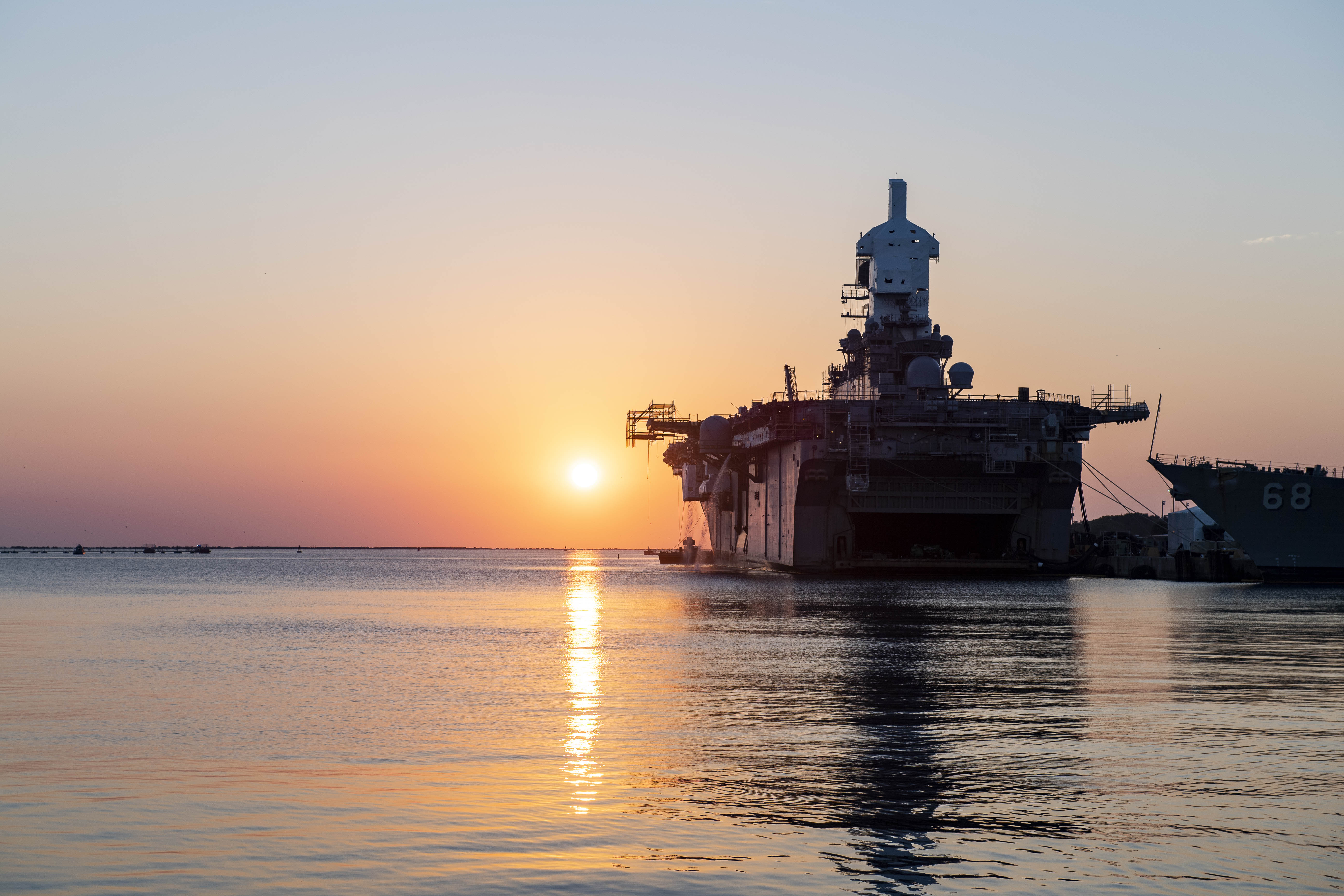 The damage from the fire that occurred in the bowels of the ship and burned for five hours “did not impact the ship’s ability to get underway for sea trials,” spokeswoman Lt. Cmdr. Amelia Umayam told USNI News on Friday.

In a statement shortly after the fire, Expeditionary Strike Group 2 confirmed that the fire had been contained to a single space.

“Sailors on board reported smoke in a cargo hold and a subsequent damage control investigation identified the fire and confirmed the fire had not spread to surrounding spaces,” read a statement from ESG 2.

“In total, 11 Iwo Jima sailors reported minor injuries; they were treated at the scene and released.”

The nearby Jacksonville Fire Department staged on Iwo Jima’s hangar to support the crew fighting the fire in the hazardous material storage space, but they were ultimately not needed, a department spokesman told USNI News.

The ship was nearing the end of a year-long maintenance availability when the fire occurred.

It is unclear if the damage has been repaired yet. Neither Naval Sea Systems Command nor ESG 2 would provide additional details on the damage to the ship before the three fire investigations conclude.

According to a source familiar with the incident, the fire did not cause structural damage to Iwo Jima but did damage electrical and ventilation systems and insulation on the amphib.

There is no clear determination yet as to how the fire started nor how much the repairs to the space will cost.

The fire aboard Iwo Jima follows two other ships that suffered fire damage during maintenance periods in shipyards.

On Nov. 10, an electrical fire broke out on USS Oscar Austin (DDG-79), which was nearing the end of what was supposed to be a year-long, $41.6 million maintenance and upgrade period at the BAE Systems Norfolk Ship Repair yard. Oscar Austin suffered extensive damage to its electrical system as a result of the accident.

The fire was caused by hot work – welding or other repair work that uses a blow torch – aboard the ship.

In a May status report, Cmdr. Garrett Miller, the commanding officer of USS Fitzgerald (DDG-62), warned that poor safety practices at the Ingalls Shipbuilding yard in Pascagoula, Miss., were putting at risk the two-year, $533-million effort to repair the destroyer that was heavily damaged in a fatal 2017 collision with a commercial ship.

Miller, in his report, wrote that expanding the hot work area “caused damage to bulkhead lagging and electrical panel.”

The following is the complete Dec. 17, 2019 release from USS Iwo Jima.

“The crew has worked hard throughout the year to make Iwo Jima even better than when she entered this CNO Availability period,” said Capt. Darrell Canady, Iwo Jima’s commanding officer. “Their dedication and effort propelled us to this day. We are prepared to get this great ship ready for deployment and rejoin the fight to defend our great nation.”

During sea trials, the Iwo Jima crew will undergo multiple training scenarios and qualification evolutions to include engineering maneuvers designed to evaluate the performance of the ship after the extensive maintenance period.

“We will be testing several new systems and upgrades,” said Canady, “We will also start preparing the crew for upcoming training events as we build their proficiency to fight casualties and respond to certain situations we may encounter while underway.”

Iwo Jima is the seventh Wasp-class amphibious assault ship, capable of carrying and delivering Sailors and Marines anywhere in the world for amphibious operations and humanitarian assistance.

“We are excited to rejoin the fleet and support our Navy and Marine Corps team when the Nation calls upon us,” said Canady. “Iwo Jima Sailors are trained to do the job and do it well, with coordination, effectiveness and proficiency; we will ensure we are ready when called upon. That’s the way Iwo Jima has and always will do business.”