This post has been updated to include an interview with Sikorsky on the effort to diagnose and solve the exhaust gas re-ingestion issue.

The Marine Corps and Sikorsky have resolved the engine integration issues that slowed down the CH-53K King Stallion heavy-lift helicopter program, the service announced today.

The helicopter’s test program was overhauled in the spring after falling behind due to testing inefficiencies and challenges with the engine, including exhaust gas re-ingestion (EGR). In April, the Marine Corps signed a $1.13-billion contract with Sikorsky for Lots 2 and 3, though the contract was somewhat scaled back compared to previous plans due to cost growth and testing delays.

Today’s announcement that the engine problems have been resolved makes more realistic the government/industry team’s plans to take the helicopter on sea trials in the spring and ultimately conduct a first deployment by 2023 or 2024.

“Bringing together the tiger team exemplifies the importance and purpose of an integrated test team,” Col. Jack Perrin, the heavy-lift helicopter program manager at Naval Air Systems Command, said in the Marine Corps’ news release. “It was great to see the team turn the corner for the program and produce a resolution to an ongoing problem. This was a priority for NAVAIR, industry and the Marine Corps, and the team hit it out of the park.”

The helicopters are powered by three new General Electric T-408 engines that allow them to carry 27,000 pounds for 110 nautical miles, or up to 36,000 pounds in shorter flights – allowing the helo to lift a pair of Joint Light Tactical Vehicles (JLTVs).

However, during testing, it was discovered that the engines were sucking in exhaust instead of clean air, leading to a major effort to address the EGR issue.

“EGR occurs when the hot engine gasses are ingested back into the system,” assistant program manager Debbie Cleavenger said in a NAVAIR news release.
“It can cause anything from increased life-cycle costs, poor engine performance and degradation, time-on-wing decreases, engine overheating and even engine stalls.”

Steve Schmidt, Sikorsky’s CH-53K Chief Engineer, told USNI News on Tuesday that the problem actually wasn’t quite what the team thought originally, and that the all-digital design of the helicopter allowed the team to diagnose the problem, model it and engineer a fix much faster than would have been possible with traditional paper drawings.

“Exhaust gas re-ingestion occurs when hot air either comes from (any of multiple sources) and some of that heat ends up getting ingested into an engine inlet,” he explained.
“What happens when you ingest this hotter air is, you get a much bigger temperature rise of the air going into the engine, and it kind of goes into one side if you will, they call that distortion. The engine doesn’t handle that very well, and what you can end up getting is called an engine stall.”

NAVAIR spokeswoman Megan Wasel said the effort to get at the root cause of this problem and to prevent it going forward was significant.

“A tiger team of combined industry and government experts completed a trade study analysis, including state-of-the-art computational fluid dynamics analysis, to characterize and identify design corrections. They completed more than 30 test scenarios and evaluated 135 potential design corrections before replicating the model with the most promising modification for rigorous actual flight testing. Four test flights and nearly 13 hours of flight testing validated that modification as the solution to mitigating EGR,” she told USNI News on Tuesday. 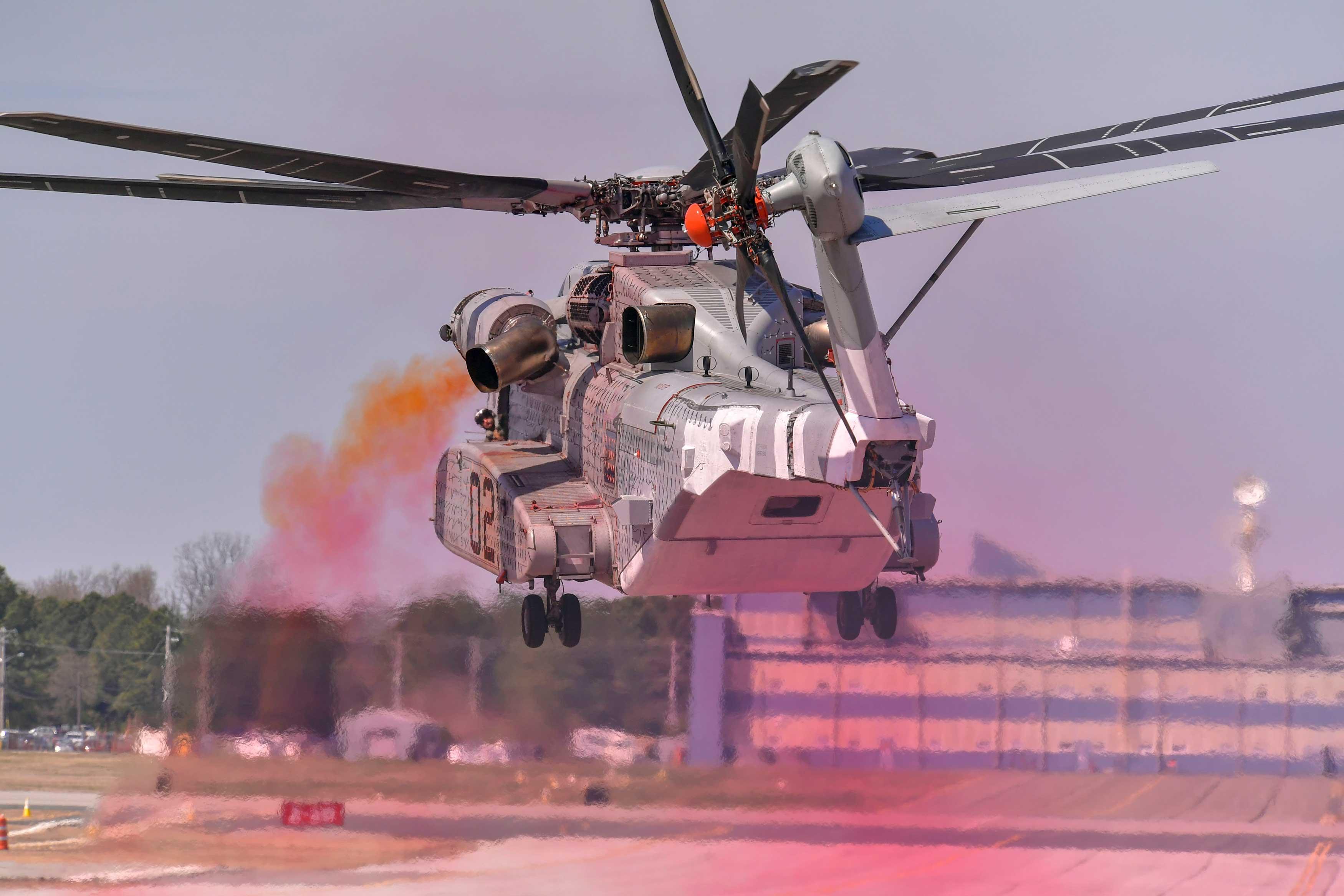 Schmidt said the data from flight tests and modeling showed the problem wasn’t quite what they initially thought.

“This is really where the 53K all-digital design really became key. … It made it much easier to make these models and run these models. So after we ran probably about 130 different iterations of design changes, our models were then able to make some parts and try them out of the helicopter, and then we downselected to a design,” Schmidt added.

The change to the helicopter includes elongating the exhaust pipe and adding support for the longer and heavier piece. Modeling and live tests show the solution has been effective in moving hot air away from the bottom of the helicopter and away from the engine inlets, keeping the engine bays cooler and avoiding engine distortion and stalls.

The Marine Corps originally stated that Sikorsky would have to solve the problem by this summer, but a springtime overhaul of the test program pushed that date back to December, USNI News understands. By reaching this milestone now, Sikorsky, NAVAIR and the Marine Corps are set up to keep the remainder of their test and fielding plan on track.

Schmidt said four test helicopters would be outfitted with the change by the end of 2020, allowing the Marines to use these improved helicopters for initial operational test and evaluation. He could not comment on whether the improvements would be used in upcoming sea trials in 2020, but he simply said that the government understood the situation and would decide how to move forward to keep the program on track. Sikorsky spokeswoman Melissa Chadwick told USNI News that, by engineering the change by the end of this year and beginning to backfit it and insert it into the production line for new helicopters, the planned schedule would see no impact.

“The joint team schedule supports IOT&E and the first operational deployment in 2023-2024,” she said.

Sikorsky officials told USNI News in May that they were using one of the six test helicopters to work out any remaining issues in the maintenance manuals and to start learning more about how to fix and sustain the new aircraft. Another test helo was devoted solely to the EGR issue. The rest were being used to tick off the remaining test requirements in a more methodical manner than the original test plan laid out. 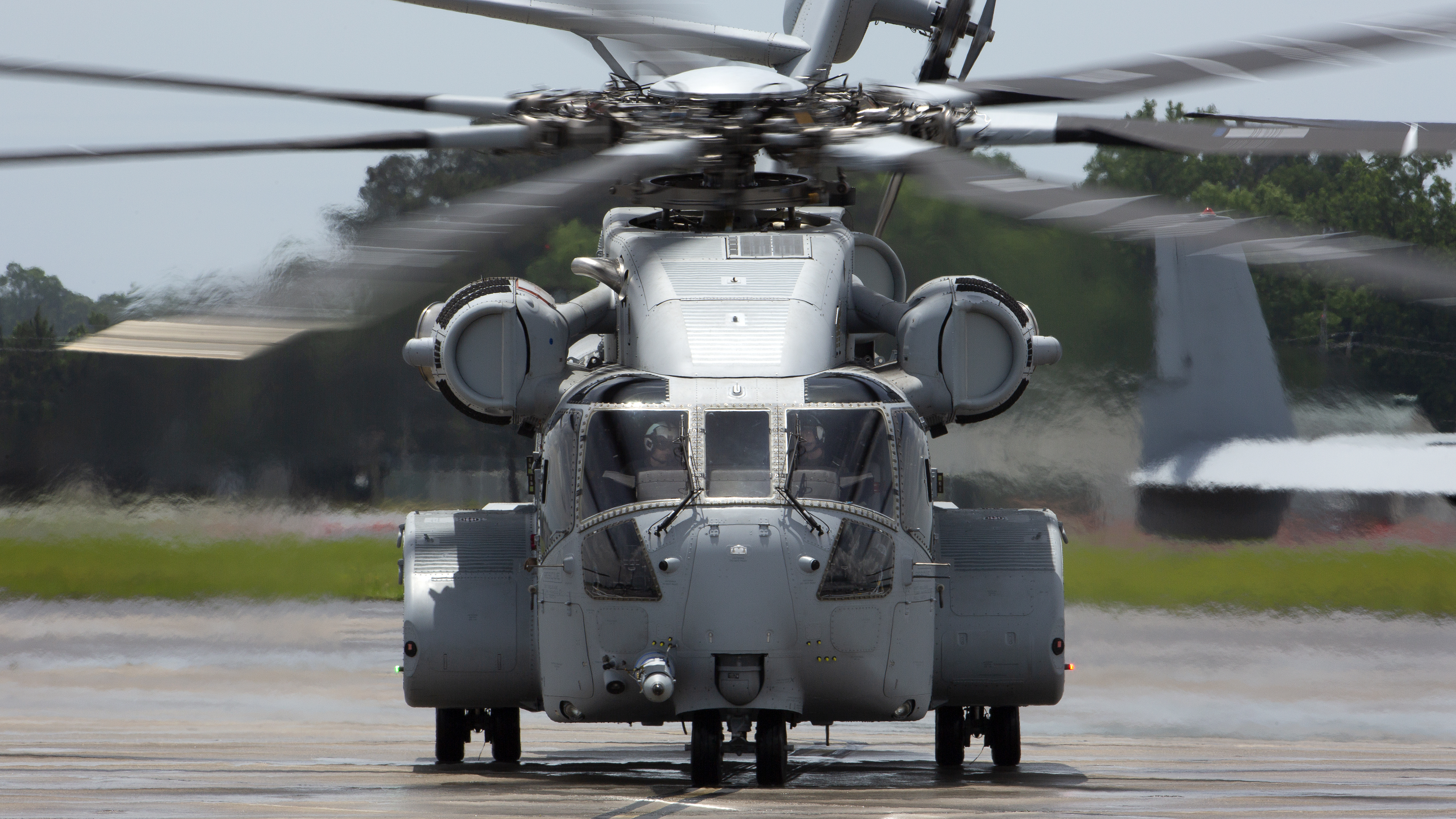 The helicopter already demonstrated or exceeded all requirements for speed, range, altitude, lift capacity and more, and the test team put the aircraft through its paces in extreme weather and other conditions. The test team plans to bring a helo to a Navy amphibious warship sometime between February and May 2020 for sea trials, where the helicopter will prove it can take off from and land on a flight deck at sea and can be maintained underway.

Schmidt told USNI News that the ability to respond to this challenge so quickly demonstrates the benefit of digital design, which he said Lockheed Martin – of which Sikorsky is a part – is fully embracing for its programs.

“From the beginning, the design was completely done digitally as models. We don’t print out drawings, and the shop floor instructions for example are all digital. So things go together a lot easier, and you have the data then to go solve problems more rapidly like this or build parts more rapidly. And Lockheed Martin is taking on a digital transformation along these lines to share this type of aspect with other programs moving forward, because they do see there’s a tremendous value in that,” he said.

“If you didn’t have a digital design that was already available [when the CH-53K EGR problem arose], it would have taken us much longer to then go try to design or put it in a digital environment so that we could then model it. But because it was so accurately done in the first place, we were able to take that digital design and go right into our computerized models to try to understand this problem. That saved quite a bit of time,” he continued.
“And then, two, when we were going to build the parts to be able to fix this, we were able to work closely with our suppliers with the digital design for them to be able to start building up front and communicate in real time as we refined the design, so that also shaved a bunch of time off of this. So I would say it was definitely significant; if it wasn’t for the digital design we would not be sitting here today I think with the solution to the problem.”