THE PENTAGON – Amid ongoing testing challenges and delays in the Marine’s CH-53K heavy-lift helicopter program, the legacy CH-53E fleet is seeing its highest reliability in decades and is focused on modernization efforts to keep it ready through 2031 or beyond.

Just a few years ago, the legacy helo’s ability to make it through the planned transition was in doubt. The CH-53E Super Stallions entered service in 1981 and have been used heavily during operations in the Middle East since 2001. The aircraft have been in high demand and the Marine Corps have foregone planned maintenance to keep the aircraft forward-deployed and operating nonstop to move people and supplies around the theater.

Now, as early results of a reset effort are proving positive, program officials are confident the heavy-lift helicopter will not only stay flying through 2031 but will remain combat-credible in an evolving security environment.

Maj. Jeremy Hawkins, the CH-53E requirements officer at the Marine Corps Aviation headquarters, told USNI News that the first 22 helicopters have completed their reset process, and their newfound readiness is changing the way unit commanders can plan for training, operations and maintenance.

A fleet of 142 CH-53Es is doing the same workload that a planned fleet of 200 CH-53Ks will do, and the squadrons have 12 aircraft apiece instead of the 16 they would normally have. But despite the pressure on the fleet, Hawkins said the reset process and a focus on fully resourcing depot maintenance availabilities “are returning aircraft back to the fleet, so in reality we have a much higher percentage of aircraft in the fleet squadrons that are flyers” instead of being in long-term down status.

“The Marines in the squadron are fixing and flying aircraft, rather than staring at long-term down aircraft,” he added. 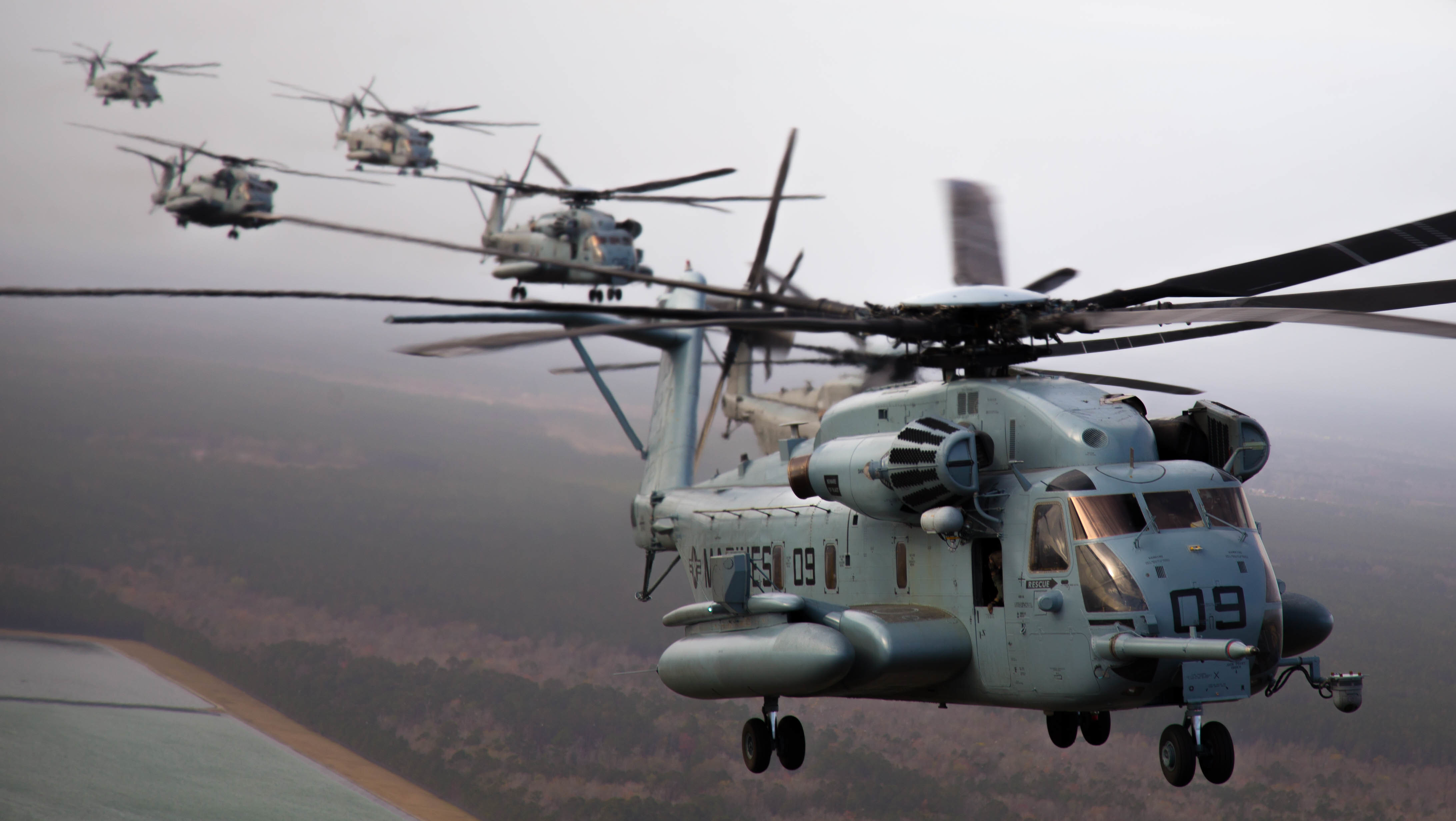 At the height of operations in Afghanistan and Iraq, the Marine Corps decided to keep CH-53Es in theater for years at a time, rotating in and out crews to fly them but keeping the aircraft themselves forward-deployed. This helped boost operational availability in the short-term but led to systemic maintenance issues. Hawkins said that a minimum amount of maintenance was done to keep the helicopters “safe, reliable, flyable, but anything that was beyond that was deferred maintenance.”

For example, he said, “some of the practices in the past were, we need this aircraft to fly, so splicing wires. So what that did is it just degraded the signals throughout the plane and made things more challenging” for the maintainers who would later have to troubleshoot a problem.
“So they said, light doesn’t come on; now when they went and chased that down, it could have been a break here or a break here or a break there – where are they losing the signal? As a pilot, all we knew was, the light doesn’t come on,” but for the maintainers having to fix the problem, the manuals were no longer useful because all the wire splicing meant that the problem could be originating from any number of places instead of wherever the manual suggested.

The CH-53E reset effort seeks to reverse the effects of these past decisions. The Marine Corps tends to break up its squadron-level aircraft maintenance into four phases, each focusing on different components. The reset effort does all four phases at once, meaning the helicopters are largely dissembled and stripped of their paint, meaning maintainers can see and address larger systemic problems like bad wiring, and structural problems like cracks are easier to find and fix.

Hawkins called the reset “a huge part of extending our service life” out to 10,000 flight hours.

He said the reset effort is also improving current mission-capable rates for unit commanders. Fleet-wide, the Marine Corps is seeing a number in the high-90s each month of CH-53Es that can fly, instead of being in long-term down status. He said he didn’t have historical numbers to compare that to because no one was eager to keep track of that figure earlier this decade when the readiness was much worse. Generally, though, he said there’s a feeling that, whereas a few years ago two or three of every 10 helicopters might be in long-term down status, that’s no longer the case.

“What that does is it gives the operational commander the ability to do the scheduled maintenance without sacrificing training or potentially an operational commitment,” Hawkins said.
“Before, you had such limited assets in the squadron because you had so many long-term down that you had to pick, are we going to fix them today or are we going to fly them today? And now they’re generally able to do them concurrently.”

Hawkins said 22 of a planned 141 resets are complete, and he expects all helicopters to have gone through this reset effort by 2026.

However, to keep the helicopters ready through 2031 or beyond, Hawkins said a continuation of the reset effort may be funded.

“As we continue to march this program, we’re seeing the benefits across the Echo fleet and realizing, the more aircraft we have on the line that are capable of being flyers, the more options the commanders have – it pulls down their risk in a lot of decisions, and reset has been a big part of that,” he said.
“So 2026 comes around, we are not going to get any more 53Es, so if we stop resetting them we’ll just put that risk back into the fleet. Reset’s really been an opportunity to offset that risk.”

Hawkins said that the material condition of the CH-53Es was so bad that the Marine Corps could only focus on repairs; now, the service is focusing more on modernizing the helicopters to remain combat-credible for the remainder of their service lives.

The Marine Corps is looking at buying new motors, which is key to the heavy-lift mission. The current motors have been fixed repeatedly and the service is seeing diminishing returns each time they work on the motors, so new ones will bring them through the rest of their lives. The CH-53E fleet is also next in line to go through Marine Corps Aviation’s digital interoperability plan, after the V-22 fleet, and the heavy-lift helos are at the forefront of upgrading sensors, radar warning systems, countermeasures and more.

“Really there’s no piece of the helicopter that I would say is just, hey we’re going to let that fall off. There’s a plan really to keep the Echo modern through its lifecycle,” Hawkins said, adding that “a big push was to piggyback off of the Kilo identified requirements. So if it was a requirement for the Kilo, the conversation, was based on the current operating environment, is it required for the Echo? And a lot of times it was. So we’re taking advantage of that.”

Most of these upgrades are funded either this current fiscal year or will be in the next few years. Hawkins said the Marine Corps will likely invest in modernization up until about five years before the end of the helicopters’ lives.

As for the transition, the Marine Corps planned to “start the CH-53K transition with the [initial operational capability] declaration of the HMH-366 detachment at the end of calendar year 2019. It will take approximately four years for HMH-366 to complete its CH-53K transition (subsequent squadrons are planned for 18-month transitions). 2nd MAW will complete the CH-53K transition in FY26, followed by 1st MAW in FY27 and 3d MAW in FY29,” according to the 2018 Marine Corps Aviation Plan. By FY 2022, according to this schedule, the fleet replacement squadron would shift its focus from training mostly new CH-53E pilots to training mostly new CH-53K pilots.

However, testing delays with the new CH-53K may change that schedule. Though the program delivered its first aircraft last May and had appeared on track for reaching remaining milestones, the program has fallen about 18 months behind schedule in testing due to both technical challenges and inefficiencies in the testing itself. The program was previously aiming for a December 2019 initial operational capability (IOC) declaration, with the summer of 2020 being the threshold IOC date; it now appears the program may not reach IOC until 2021, a Marine Corps official told USNI News.

During last summer’s testing, the official said, Sikorsky and Naval Air Systems Command engineers were conducting daily test flights, but not all were counting towards the credits the program needed; so while the testing looked good on paper, the program wasn’t advancing as quickly as it should have been. There were also too few aircraft to support the testing, so the schedule slowed as helicopters had to pause between flights to have sensors reconfigured. The program also encountered an “exhaust gas re-ingestion” issue, where the engine was sucking in exhaust instead of clean air. The program has until this summer to demonstrate a fix for it.

“The decision to decrease the FY20 procurement quantities balanced concurrency management, industrial supply base requirements, and training requirements to support Initial Operational Capability (IOC) and first deployment timeline while developmental testing continues,” he continued.
“It’s important to note the change in procurement for FY20 is not expected to impact the CH-53K’s first operational deployment in 2023-2024. The King Stallion will provide critical heavy lift and transport capability required for the Marine Corps to function in the future operating environment.”

Current plans call for the legacy CH-53Es to begin consolidating in the early 2020s – bringing squadrons back up to 16 helos each instead of 12, as the first squadrons transition to the new CH-53K and can send their old helos to other squadrons. The inventory of CH-53Es wouldn’t begin to drop until 2026, when it would slowly shrink through 2031.

“As the Echo guy, I’m not worried at all. We’re healthier now than we’ve been in the last 35 years as a community, which is pretty significant.”